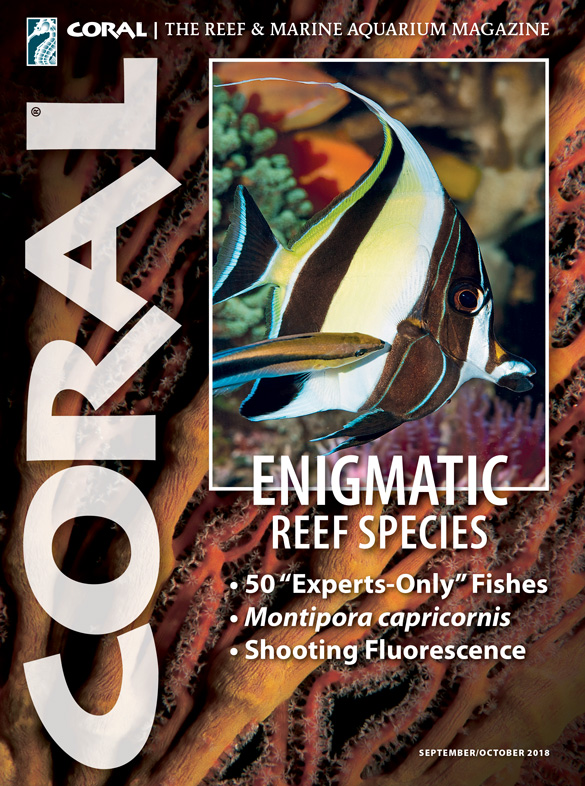 CORAL Magazine‘s 5th issue for 2018 deals with some of the most challenging marine aquarium fishes out there. What does “Expert Only” mean these days? Where has the bar moved? Scott Michael guides you through a modern look at the frontiers of marine fish husbandry. Ellen Thaler recounts the ongoing challenges of keeping the coveted Moorish Idol, Zanclus cornutus, our cover species. Something you read in this issue might be the key to your success with any number of hard-to-keep coral reef fish species, if you’re up for the challenge.

Beyond our cover feature, this new issue shares an in-depth look at the plating Montipora corals, as reported by CORAL contributor Felicia McCaulley. Daniel Knop shares the secrets of photographing stunning coral fluorescence using a black light (UV-A) flash. Jason Oneppo shares a history of brine shrimp on the 50th anniversary of San Francisco Bay Brand, while Samuel Nietzer considers viewing the Crown-of-Thorns Starfish (Acanthaster) not as a reef pest, but as an aquarium mascot. Furthemore, a wide array of exciting fish and corals await in our Rarities and Reef Notes columns.

The magazine is printed and on its way to subscribers, local aquarium shops, and select bookstores—on sale September 4th, 2018, at the best marine aquarium retail stores and leading Barnes & Noble stores everywhere. 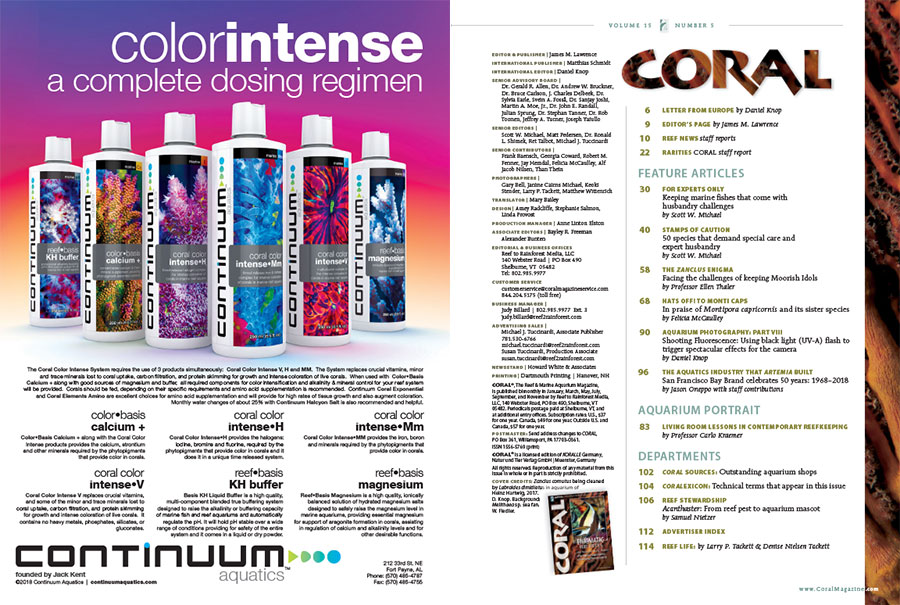 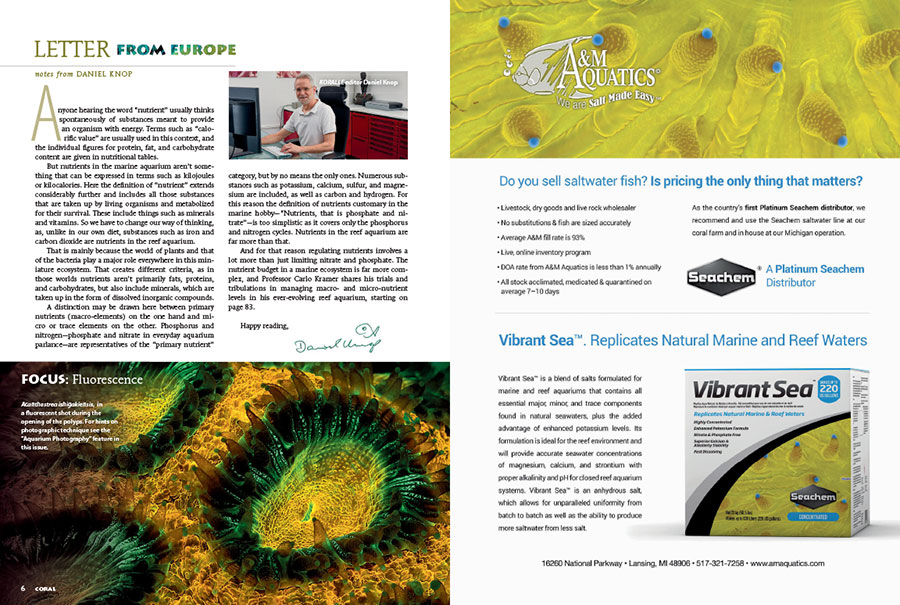 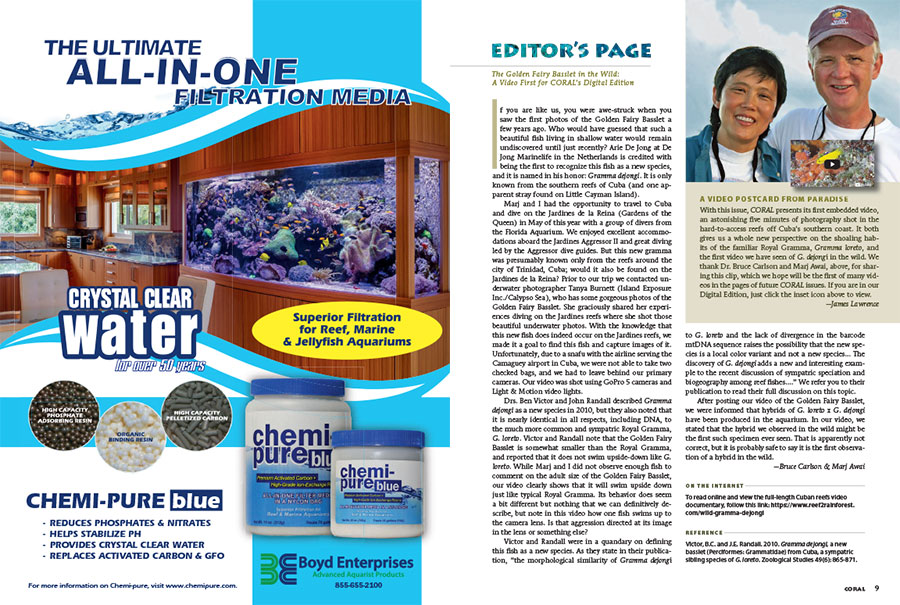 Following the launch of our improved digital delivery platforms earlier this year, we’re pleased to share a video first for CORAL’s Digital Edition: The Golden Fairy Basslet (Gramma dejongi) in the Wild, as shared and shown by Bruce Carlson and Marj Awai. 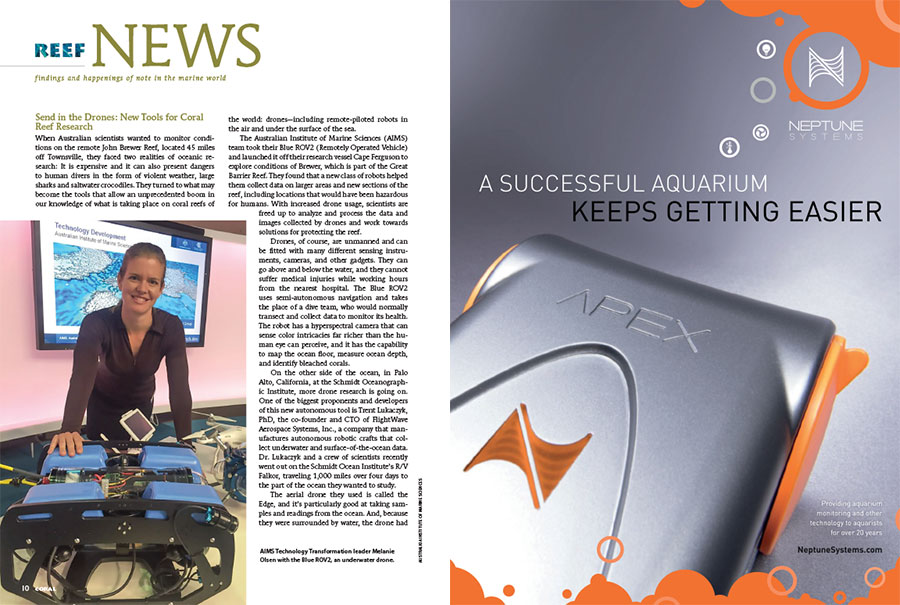 Send in the Drones: New Tools for Coral Reef Research; Hippocampus japapigu: the Newest Pygmy Seahorse; Evolution—In the beginning was the sponge; Swiss chefs must stun lobsters before cooking. Learn about all these captivating stories in our Reef News column. 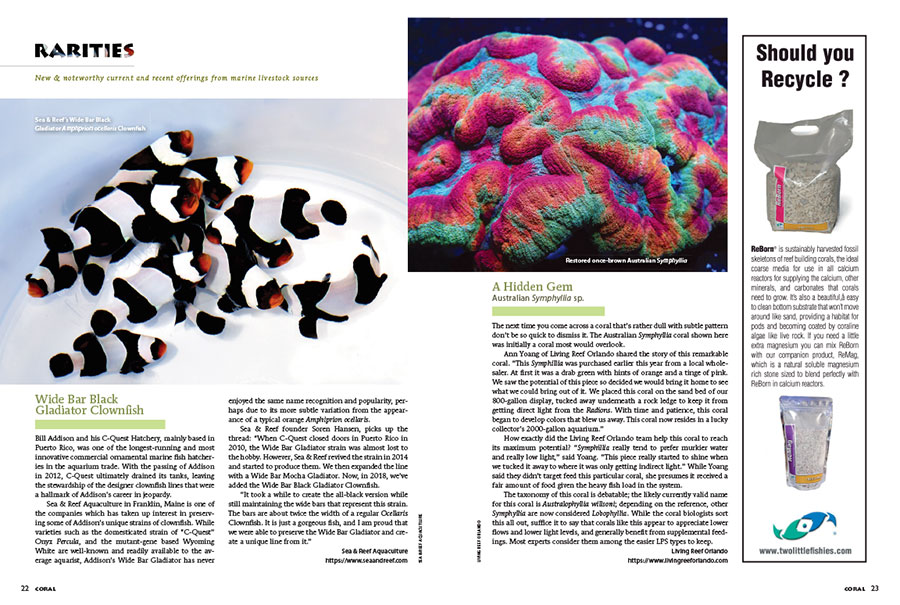 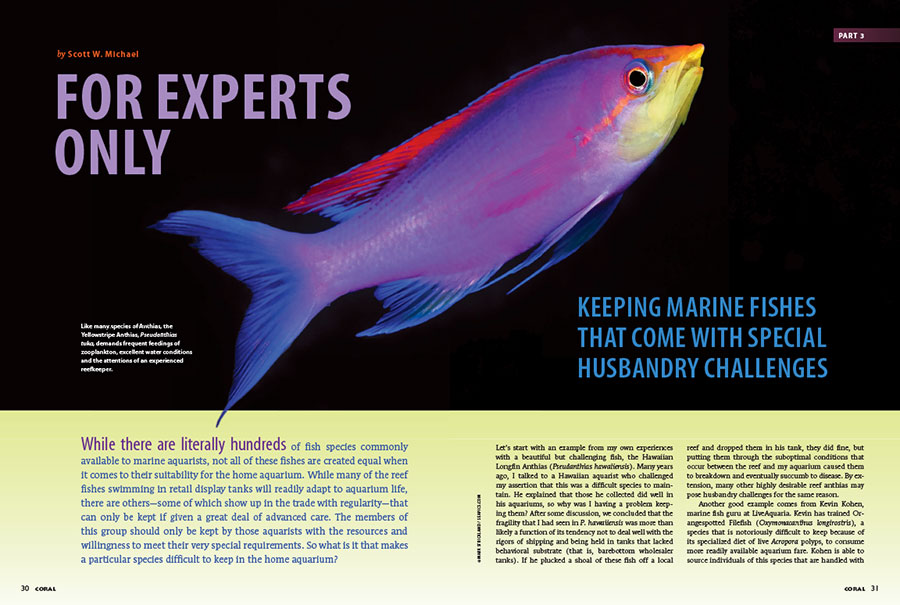 Introducing our cover feature, Scott Michael writes, “While there are literally hundreds of fish species commonly available to marine aquarists, not all of these fishes are created equal when it comes to their suitability for the home aquarium.” Find out what makes some species difficult to keep in aquariums, in “For Experts Only.” 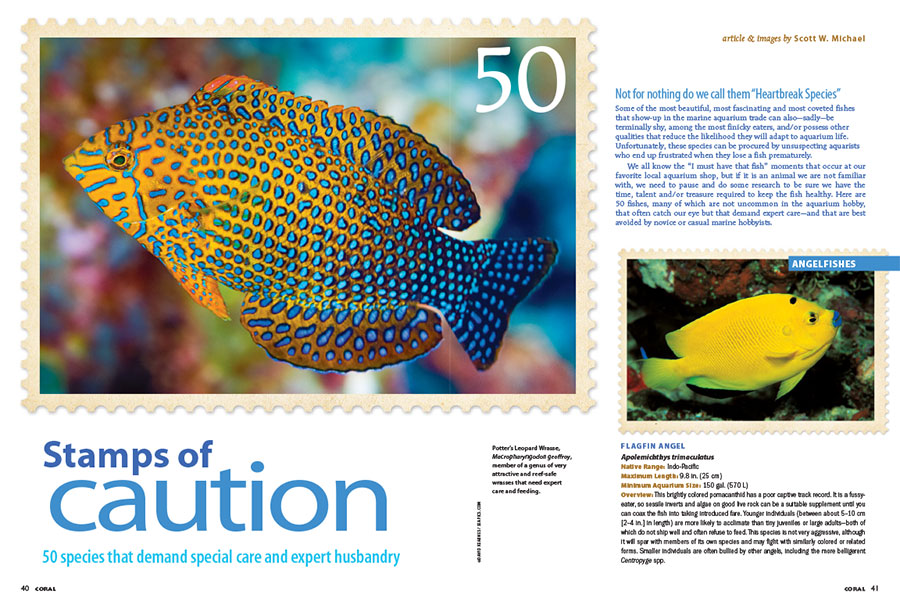 “Stamps of Caution,” by Scott Michael, introduces 50 fishes, many of which are not uncommon in the aquarium hobby, that often catch our eye but that demand expert care—and that are best avoided by novice or casual marine hobbyists. 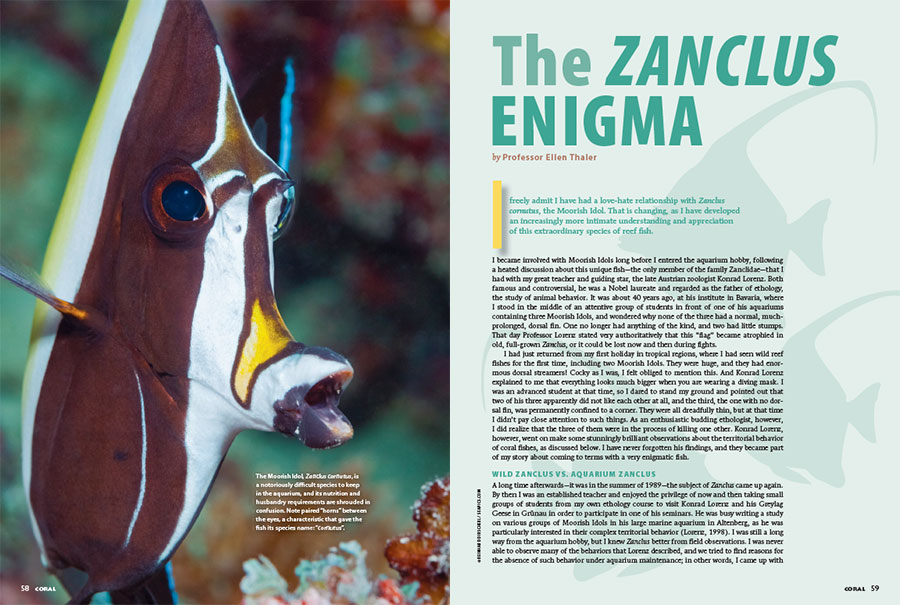 Ellen Thaler shares her heartbreaks and successes keeping one of the most coveted expert-only marine aquarium fishes in existence, the Moorish Idol (Zanclus cornutus). Required reading (we think) for anyone attempting to keep this demanding species! 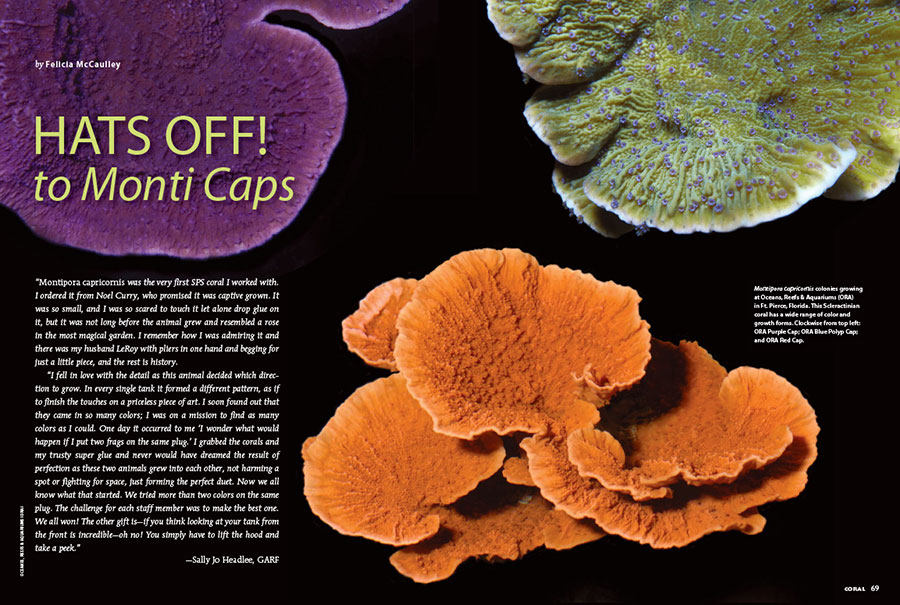 CORAL contributor Felicia McCaulley, along with the support of many talented photographers and coral culturists, presents an unprecedented modern look at the “Monti Caps” (Montipora capricornis). 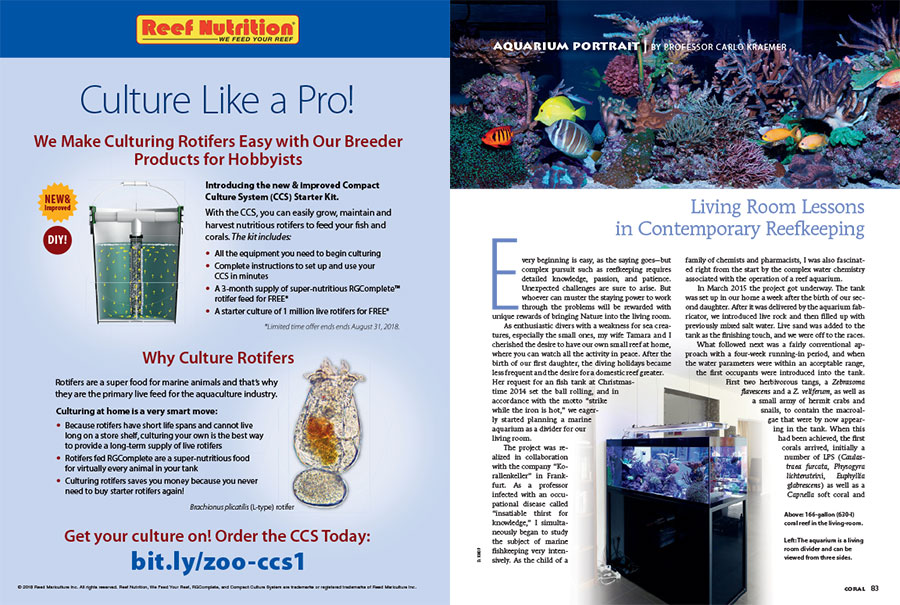 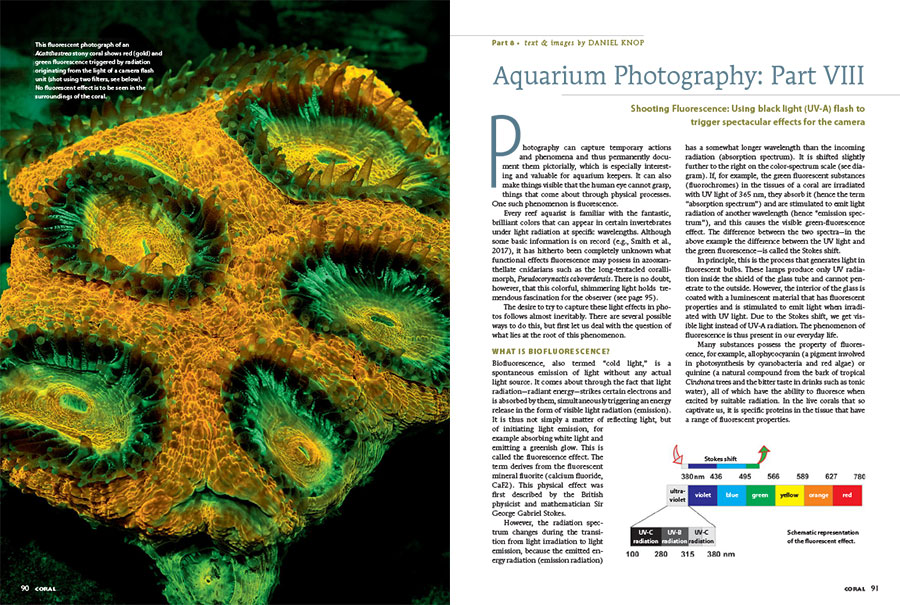 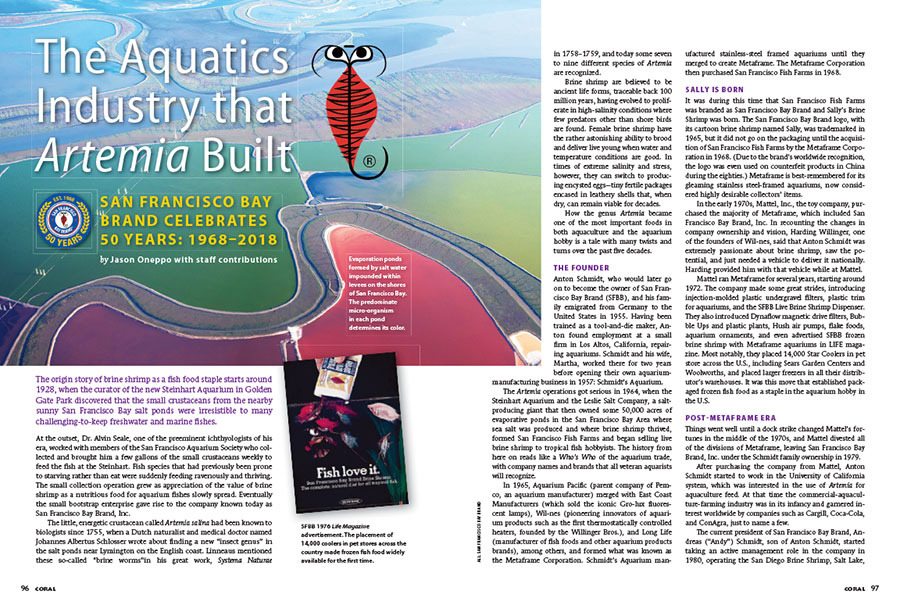 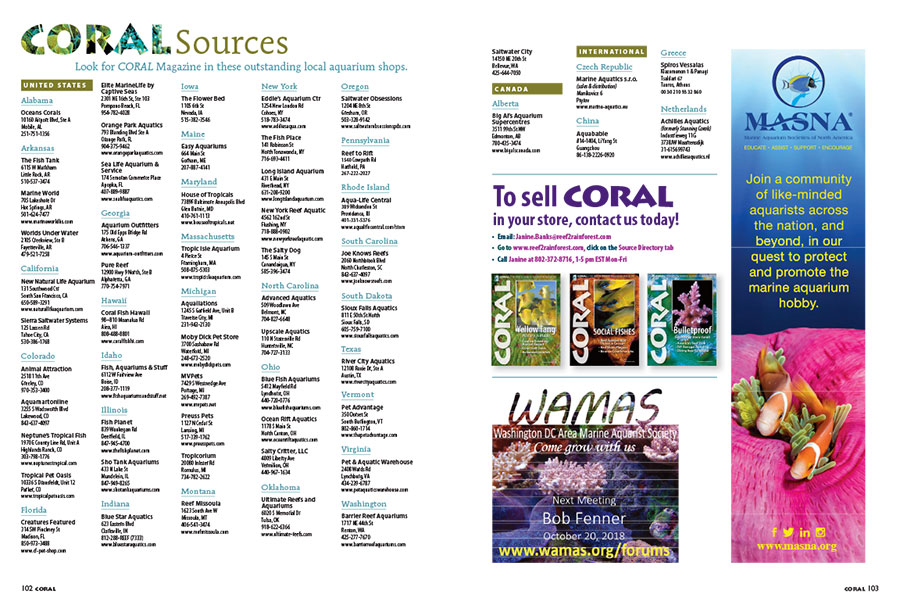 Not sure where to find your next fish or coral? Check out the very best local fish shops around the county in our Sources directory. If they’re smart enough to carry CORAL Magazine in their shops, you know they value the same things that make you a CORAL reader! 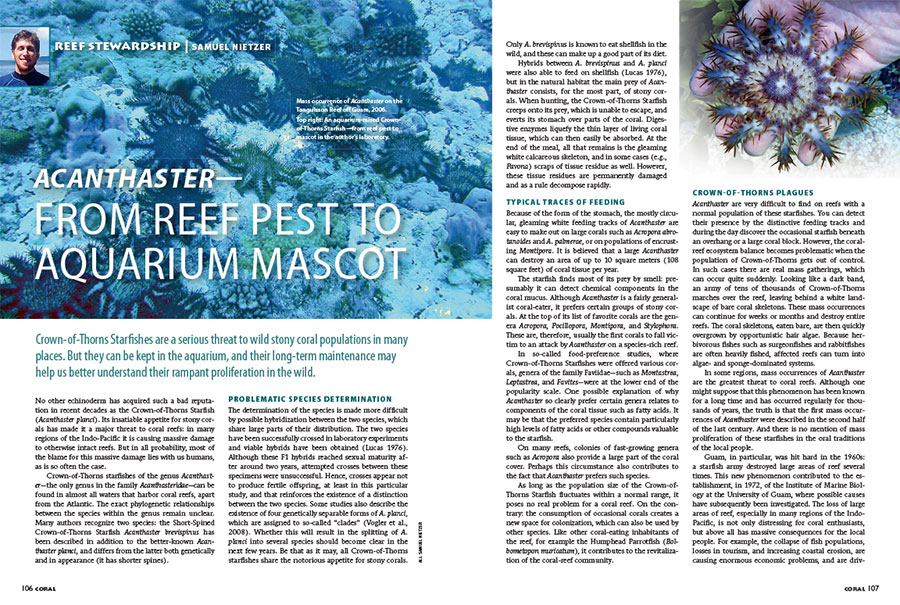 Crown-of-Thorns Starfishes are a serious threat to wild stony coral populations in many places. But they can be kept in the aquarium, and their long-term maintenance may help us better understand their rampant proliferation in the wild. Samuel Neitzer investigates in our REEF STEWARDSHIP column.