Observing the Golden Fairy Basslet, Gramma dejongi, in the Wild

Observations on the Golden Fairy Basslet in the Wild

By Bruce Carlson and Marj Awai

If you are like us, you were awe-struck when you saw the first photos of the Golden Fairy Basslet a few years ago.  Who would have guessed that such a beautiful fish living in shallow water would remain undiscovered until just recently?  Arie De Jong at De Jong Marinelife in the Netherlands is credited with being the first to recognize this fish as a new species, and it is named in his honor: Gramma dejongi.  It is only known from the southern reefs of Cuba (and one apparent stray found on Little Cayman Island).

My partner Marj and I had the opportunity to travel to Cuba and dive on the Jardines de la Reina (Gardens of the Queen) in May of this year with a group of divers from the Florida Aquarium.  We enjoyed excellent accommodations aboard the Jardines Aggressor II and great diving led by the Aggressor dive guides.  But this new Gramma was presumably known only from the reefs around the city of Trinidad, Cuba; would it also be found on the Jardines de la Reina? Prior to our trip we contacted underwater photographer Tanya Burnett (Island Exposure Inc./Calypso Sea) who has some gorgeous photos of the Golden Fairy Basslet.  She graciously shared her experiences diving on the Jardines reefs where she shot those beautiful underwater photos.  With the knowledge that this new fish does indeed occur on the Jardines reefs, we made it a goal to find this fish and capture images of it.  Unfortunately, due to a snafu with the airline serving the Camaguey airport in Cuba, we were not able to take two checked bags, and we had to leave behind our primary cameras.  Our video was shot using GoPro 5 cameras and Light & Motion video lights. 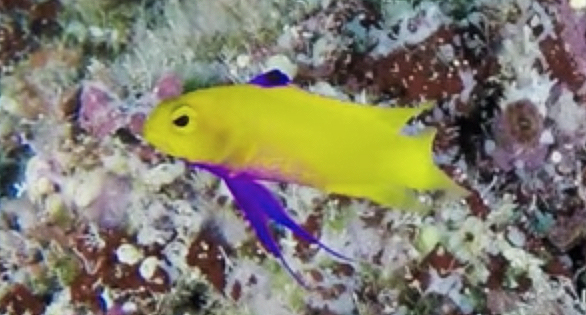 The Golden Fairy Basslet, aka the Cuban Gramma, on its native reef of the coast of southern Cuba. Image: Screenshot from video by Bruce Carlson.

Drs. Ben Victor and John Randall described Gramma dejongi as a new species in 2010, but they also noted that it is nearly identical in all respects, including DNA, to the much more common and sympatric Royal Gramma, G. loreto.   Victor and Randall note that the Golden Fairy Basslet is somewhat smaller than the Royal Gramma, and reported that it does not swim upside down like G. loreto. While Marj and I did not observe enough fish to comment on the adult size of the Golden Fairy Basslet, our video clearly shows that it will swim upside down just like typical Royal Gramma.  Its behavior does seem a bit different but nothing that we can definitively describe, but note in this video how one fish swims up to the camera lens.  Is that aggression directed at its image in the lens or something else?

Victor and Randall were in a quandary on defining this fish as a new species.  As they state in their publication “the morphological similarity of Gramma dejongi to G. loreto and the lack of divergence in the barcode mtDNA sequence raises the possibility that the new species is a local color variant and not a new species….The discovery of G. dejongi adds a new and interesting example to the recent discussion of sympatric speciation and biogeography among reef fishes….”  We refer you to their publication to read their full discussion on this topic.

After posting our video of the Golden Fairy Basslet, we were informed that hybrids of G. loreto x G. dejongi have been produced in the aquarium.  In our video, we stated that the hybrid we observed in the wild might be the first such specimen ever seen.  That is apparently not correct, but it is probably safe to say it is the first observation of a hybrid in the wild.

To view the complete video program of the Jardines de la Reina, use this link: