Killifish specialists are likely familiar with the miniature killifish Spectrolebias costae (often cited as Spectrolebias costai; see the new paper for an explanation). This tiny blue-and-black jewel is an annual killi found in central Brazil, entering the aquarium hobby as early as the 1980s, before being formally described in the Journal of the American Killifish Association in 1991 by Kenneth J. Lazara. Keepers suggest this may be a challenging species; the website ItRainsFishes.net notes, “This species is more difficult in breeding and maintaining over a longer period of time is a challenge.”

Researchers Wilson J. E. M. Costa and Pedro F. Amorim have discovered another species of Killifish, hidden within the populations of fishes currently presumed to be representatives of Spectrolebias costae. The new species, Spectrolebias gracilis, has been described in the open access journal article, A new miniature cryptic species of the seasonal killifish genus Spectrolebias from the Tocantins River basin, central Brazil (Cyprinodontiformes, Aplocheilidae), published July 17th, 2018, in the journal Zoosystematics and Evolution. Take note; any “S. costae” in the hobby which originate from the Tocantins River basin are probably going to be representatives of the new species, S. gracilis.

The male holotype of Spectrolebias gracilis was collected from the Canabrava floodplains, and measures only 19.2 mm standard length (SL). Image credit: Costa & Amorim, CC BY 4.0

The authors note that genetic code played a large role in supporting the species distinction, but there are a couple of easy differentiations. First, there is the aforementioned geographic separation, with S. costae originating from the Araguaia River basin. Additionally, one of the notable differences that can help the layperson distinguish the species is male coloration; in S. costae, the blue dots on the dorsal and anal fins are arranged in a single row along the base of each fin. In S. gracilis, there are irregularly organized blue dots on the dorsal fins, which can seem to loosely form two rows. 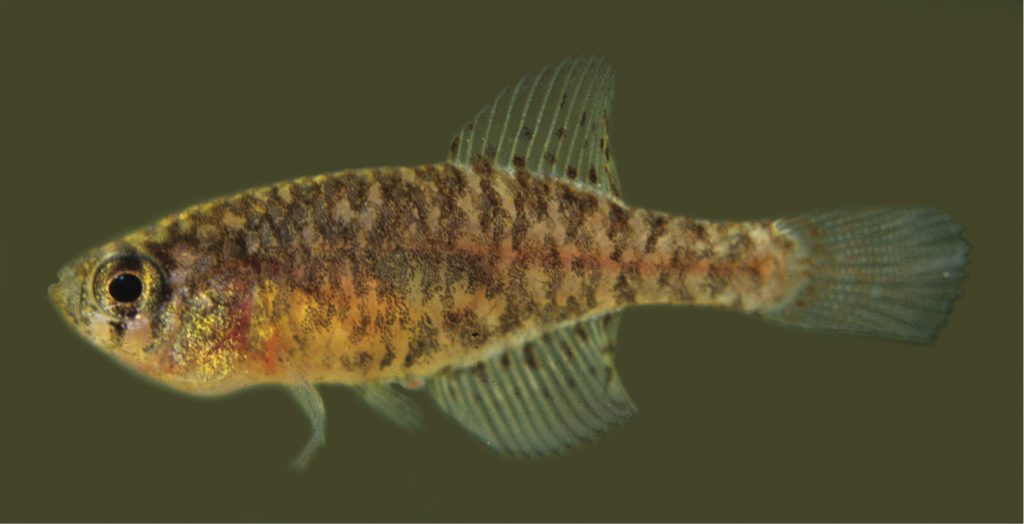 A female paratype of Spectrolebias gracilis from the Canabrava floodplains measuring 17.8 mm SL. It’s likely that the females of S. gracilis and S. costae would be indistinguishable to most hobbyists, which is why knowing where your fish came from and avoiding population mixing can be critical to keeping captive species lines clean. Image credit: Costa & Amorim, CC BY 4.0

Both sister species share a common ancestor, which the authors suggest underwent a “singular miniaturization event,” responsible for the truly diminutive maximum size of only 20 mm standard length (approx. 3/4″)  for both species (note, Fishbase reports that S. costae can reach lengths of up to 4 cm). In the end, we suspect that the captive husbandry and maintenance of S. gracilis will prove no different than S. costae. Perhaps some of you are lucky enough to already own S. gracilis without even knowing it? If so, please tell us about it!

More on the husbandry of the related Spectrolebias costae can be found at ItRainesFishes.net.