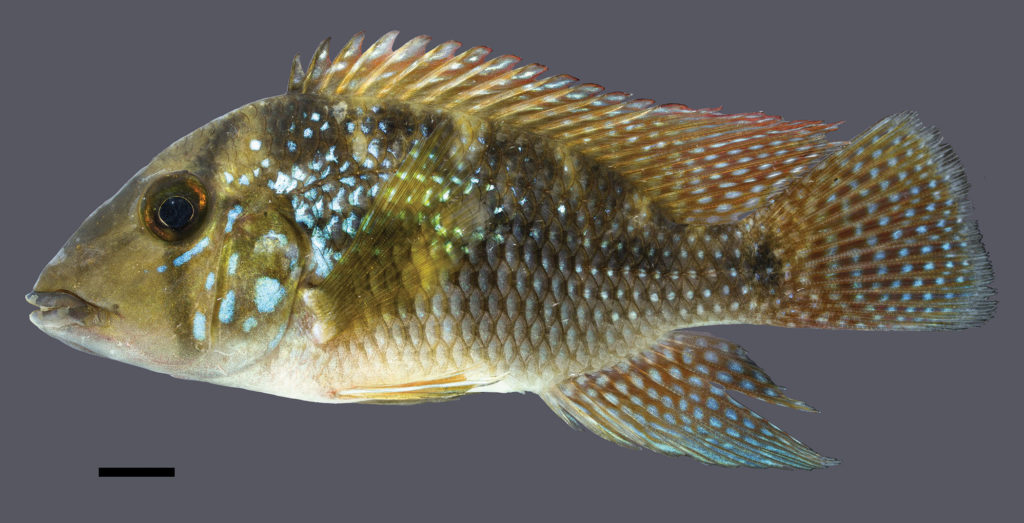 The holotype for Geophagus rufomarginatus measures 96.8 mm SL and was collected from the Buranhém Basin in the Bahia state of Brazil. Image credit: J.L.O. Mattos.

Geophagus rufomarginatus has only been encountered from the middle and lower reaches of the Rio Buranhém Basin, at altitudes of about 65 m above sea level or less,  in the Bahia state of northeastern Brazil. It species name is given due to the red markings of the dorsal fin. The authors report this species “is distinguished from all other species of ‘G.’ brasiliensis group by having: dorsal-fin lappets with red edges (vs. grey or dark brown), presence of longitudinal series of small light blue spots between anal-fin spines and rays (vs. never this pattern), and non-denticulated gill-rakers (vs. denticulated).” The largest specimen recorded was 10.41 cm standard length (4 inches).

The holotype for Geophagus multiocellus, measures 101.4 mm SL and was collected from teh Rio de Contas Basin in the Bahai state of Brazil. Image Credit: J.L.O. Mattos. 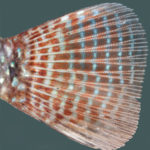 This new species is reportedly known “only from the middle section of the Rio de Contas Basin, in altitudes between about 270 and 545 m above sea level, Bahia state, northeast Brazil.”

Once again, it’s likely a modestly-sized species, with the maximum size in the examined specimens reported to be 10.29 cm SL (4 inches). The species name refers to the coloration of the caudal fin, whereupon close observation one can find some brightly-colored blue dots inside the already blue spots found between the fin rays. This trait is the signature differentiator from all other species within the species group. 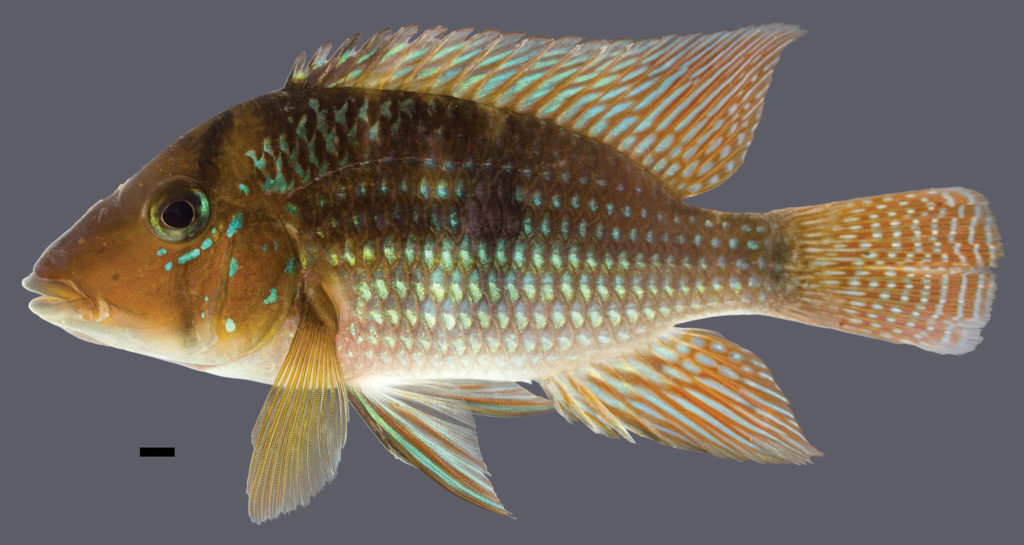 The holotype for Geophagus santosi measures 110.6 mm SL and was collected in the Mariana River in the Bahai state of Brazil. Image credit: J.L.O. Mattos.

The third and final species described in the new paper is G. santosi, an endemic of the Rio Mariana, “an isolated small coastal river of Bahia state, northeast Brazil.” The species name honors Alexandre Clistenes Alcântara Santos, an ichthyologist who studies the aquatic ecosystems of northeast Brazil. Based on the reported data, this species could be larger than the two prior, with an individual being recorded at 15.34 cm SL (6 inches).