VIDEO: An Invasive Damselfish Is Spreading Through the Gulf of Mexico 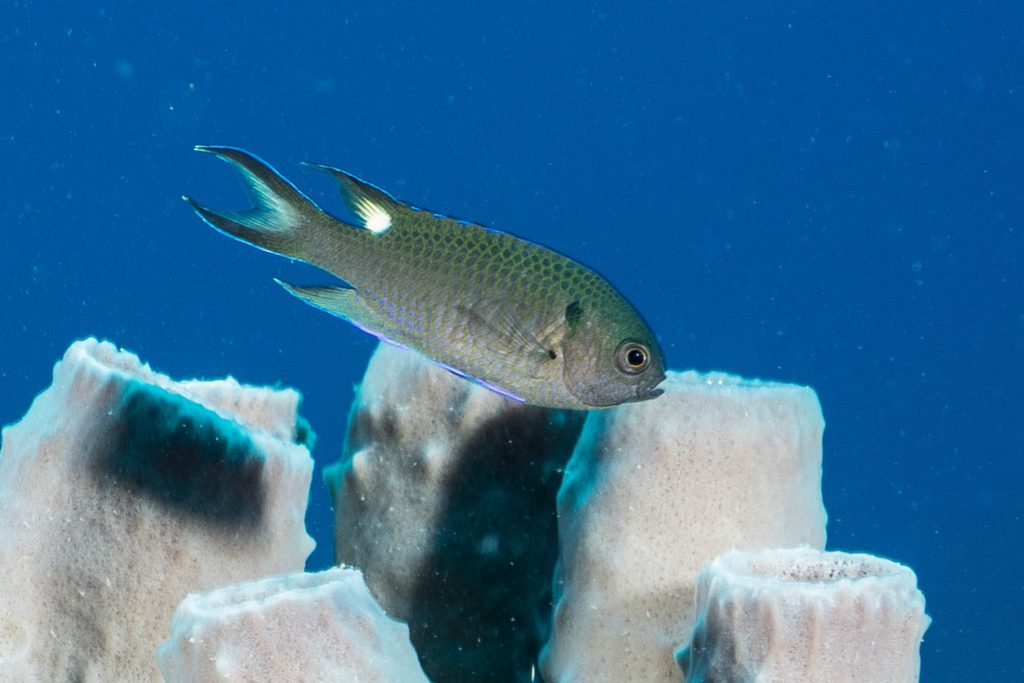 For those unaware, it may come as a surprise that the Pterois Red Lionfish that are spreading through the Atlantic aren’t alone. The next invasion is being mounted by a small damselfish species native to the Indo-Pacific. Let this story serve as yet another reminder to never under any circumstances release your pets into the wild.

The first sighting of the Regal Demoiselle (Neopomacentrus cyanomos) within Flower Garden Banks National Marine Sanctuary (FGBNMS) occurred at Stetson Bank on June 27, 28, and 29, 2018, at multiple buoyed locations across the bank at an approximate 78-foot depth. The Regal Demoiselle is a non-native species from the Indo-Pacific region, and experts believe it has the potential to displace native reef fish, such as the Brown Chromis (Chromis multilineata).

At Stetson Bank, schools of N. cyanomos (5-10 cm in total length), each containing dozens to hundreds of small fish, were observed over many of the pinnacles on the bank and schooling in the upright portions of sponges with other reef fish, including Brown Chromis. None were observed at East Flower Garden Bank or West Flower Garden Bank, located further offshore (approximately 55 km southeast of Stetson Bank). Additional information will soon be collected during annual long-term monitoring cruises in July and August. 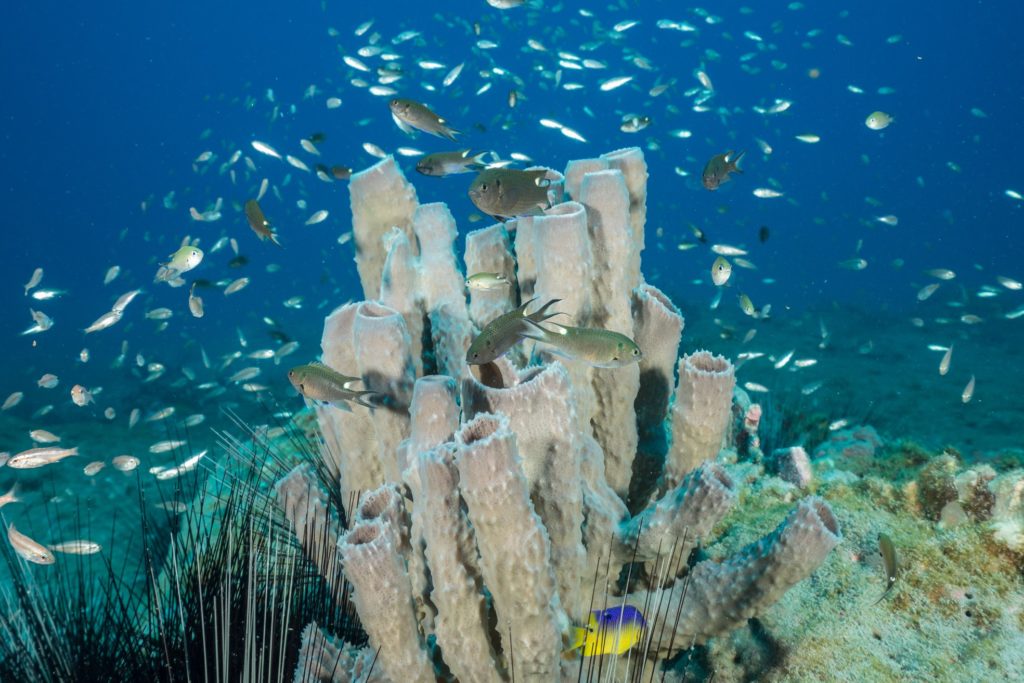 The invasive Regal Demoisell (Damselfish) (Neopomacentrus cyanomos) was first discovered in the Gulf of Mexico in 2013, where researchers found “small aggregations of N. cyanomos living on shallow, in-shore reefs near Coatzacoalcos, in the extreme southwest corner of the Gulf of Mexico.” While the aquarium hobby is often a prime suspect blamed as the cause for the appearance of non-native species, current research suggests that this species made its way into Atlantic waters through a much larger foundation population than one could pin on an aquarist who released a few wayward fish.

The leading hypothesis is that this species was brought to the Gulf by the inter-ocean transfer of oil rigs, in a similar fashion to the manner in which the non-native Sun Coral, Tubastraea coccinea, is suspected to have made its way to the Caribbean and beyond as early as the 1930s on the hulls of ships (see Creed et. al, 2016).

The data on invasive Neopomacentrus cyanomos largely refutes any culpability the aquarium trade might have in this invasion: The epicenter of this invasive population occurs in an area where marine aquarium-keeping is not a large-scale hobby, and the genetic lineages of the invasive fish don’t match the fish sold as N. cyanomos in the aquarium trade (which researchers state are not even N. cyanomos, but are properly identified as N. taeniurus which originate from the Philippines as a very minor component of exports).

While earlier reports pointed the finger of blame at the aquarium hobby and suggested that the species might stay contained to the Yucatan peninsula area of the Gulf of Mexico, the more recent research and the species’ spread to the Flower Garden Banks National Marine Sanctuary off the coast of Texas prove both of these hypotheses incorrect.

Nevertheless, whenever we see an invasive aquarium fish making their way through uncharted territories, we believe it serves as a strong reminder to never release your unwanted pets into the wild.

Watch footage of Neopomcentrus cyanomos at Veracruz, Mexico, as shared by Lorenzo Alvarez:

Review these publications for more on the Damselfish invasion: