Meet the New Damselfish Species from Mauritius and Réunion 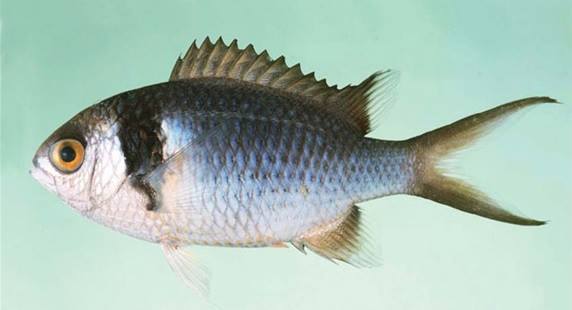 Dr. Gerald R. Allen’s latest species description brings a new Chromis to our attention. His discovery is chronicled in the journal article, Chromis torquata, a new species of damselfish (Pomacentridae) from Mauritius and Réunion, which was published in the latest edition of aqua, the journal of ichthyology (Volume 24, issue 1). The paper’s abstract is below.

A new species of pomacentrid fish, Chromis torquata, is described from six specimens, 22.0-91.9 mm SL collected in 30 m at Mauritius in the southwestern Indian Ocean. It also occurs at nearby Réunion, based on photographic evidence. The new species belongs to the C. xanthura complex, which also contains C. anadema (Japan and Micronesia to Marquesas and Pitcairn Island), C. opercularis (East Africa to Christmas Island, Indian Ocean), and C. xanthura (Indonesia to Japan, eastward to Fiji and Tonga).

The new species also differs in having the entire iris orange-yellow, compared with a narrow rim of yellow around the pupil in the other three species.

The full species description is available for purchase at https://aqua-aquapress.com/product/241_chromis-torquata/