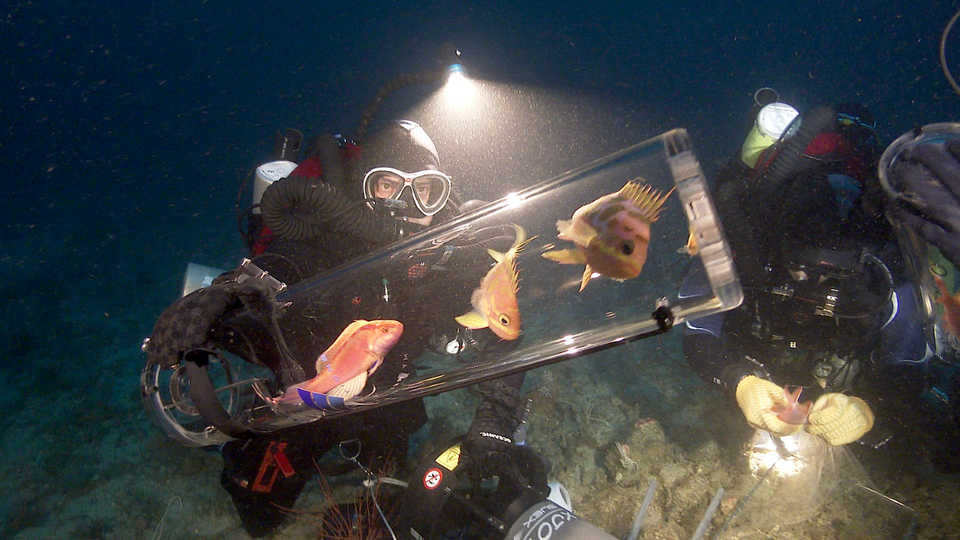 Fishes collected in the twilight zone. © 2015 California Academy of Sciences

via California Academy of Sciences

SAN FRANCISCO (June 4, 2018) – Strange and beautiful fishes from the ocean’s deep and lesser-known twilight zone reefs are hitching a ride to the surface thanks to the newly invented SubCAS (or Submersible Chamber for Ascending Specimens). This ingenious pressurized chamber, engineered by the scientists-turned-inventors at the California Academy of Sciences and the Monterey Bay Aquarium, stretches two feet long and is used by scientific divers to collect and safely surface charismatic reef residents for further study and public display. The device was described today in Frontiers in Marine Science.

“The ability to physically dive to twilight zone depths using closed-circuit rebreathers means we can closely explore these environments without relying on large submarines or remotely operated vehicles, so we needed a similarly agile way to collect important fishes and bring them back alive,” says lead author Bart Shepherd, Senior Director of the Academy’s Steinhart Aquarium and Hope for Reefs co-leader. “Before the SubCAS, hand-collecting and surfacing live fishes involved the invasive process of needling a hole in their gas-filled swim bladders to prevent over-expansion. The chamber now allows us to eliminate this step and surface precious species in a non-invasive way for closely monitored care, research, and public display.”

Into the twilight zone

Shepherd is part of a deep-diving research team that explores the twilight zone, a mysterious coral habitat stretching across a narrow band of ocean 200 – 500 feet beneath the surface. At this depth, sunlight is scarce between the light-filled shallows and the deep dark sea. As part of its Hope for Reefs initiative, the Academy team is exploring this unknown frontier with the help of high-tech equipment like closed-circuit rebreathers, which require extensive training and allow scientists to extend their research time underwater. Most fishes in the twilight zone have never before been seen by humans—many are also new to science. The long journey to bring new species to the surface is a delicate, carefully orchestrated process for both divers and their aquatic finds.

“A rapid ascent can rupture a fish’s swim bladder,” says co-author Dr. Luiz Rocha, the Academy’s Curator of Fishes and Hope for Reefs co-leader. “Using an adjustable pressure control valve, we ensure that the pressure inside the chamber is similar to the depth where the fishes were collected. Over the course of two to three days, we bring them to the surrounding surface pressure in a highly controlled manner.” 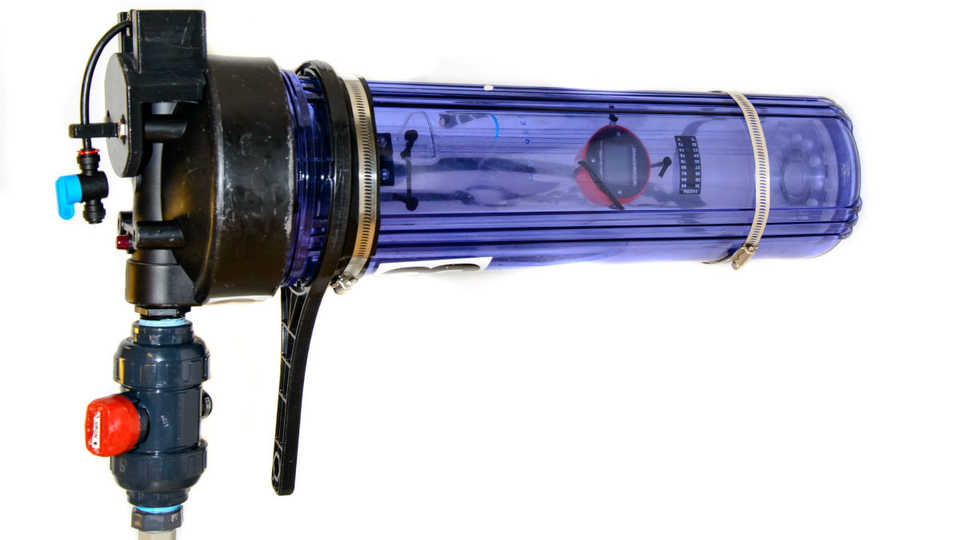 Co-author Matt Wandell, an aquatic biologist at the Monterey Bay Aquarium who designed and built the chamber during his former work at the Academy, knows that twilight zone dives present physiological challenges for divers as well as animals.

“In designing the SubCAS, we knew ease of operation was critical so as not to distract divers from keeping pace with critical decompression stops or monitoring their life support equipment,” says Wandell. “Every second counts.”

Journey in the SubCAS

The SubCAS consists of a custom-designed inner collecting jar that fits snugly within a larger chamber housing. The collection jar has a hinged door and is perforated throughout to allow water to flow over ascending finned passengers. Transparent plastic allows divers to monitor fishes for signs of stress and to keep an eye on the chamber’s submersible depth gauge and thermometer.

At a depth of approximately 180 feet during the ascent, operators of the SubCAS insert the collection jar into the chamber housing and blow an air bubble into the lid. They then seal the unit for the remainder of the dive. “The air bubble is critical,” says Wandell, “as it expands during ascent and helps maintain the pressure inside the chamber.”

At a depth of 100 feet, the divers hand off the SubCAS to a support dive team composed of skilled aquatic biologists like Wandell, who shuttle the fishes to shoreside facilities for controlled decompression. Later, they’ll carefully pack and ship the undescribed species to the Academy in San Francisco for veterinary monitoring and eventual public display.

This remarkable journey—from 500 feet beneath the ocean’s surface to a cruising altitude of 35,000 feet and back down to sea level—has been highly successful. The SubCAS survival rate is nearly 100%, barring unexpected circumstances like predation among fishes that occurred during decompression. Through statistical analysis, the team determined that survival mostly depended on the type of fish species that were collected inside the chamber. Collection depth, fish body size, and the length of decompression did not play a significant role.

“The SubCAS is an important innovation,” says co-author Dr. Hudson Pinheiro. “It allows for detailed study of new-to-science species while they’re thriving outside of their natural habitat. We can gain important insights about fish biology and behavior that we couldn’t obtain otherwise, helping us better understand what it takes to survive in a region as mysterious as the twilight zone.”

Once fishes are acclimated and cleared to join the aquarium’s 38,000 live residents, many move on to swim in the Academy’s Twilight Zone: Deep Reefs Revealed, a first-of-its-kind exhibit that showcases the mysterious underwater realm so few get to witness. Visitors can also see the portable decompression chamber up close to learn more about how it was built.

“In a time of global crisis for coral reefs, discovering strange and beautiful fishes from unexplored reef habitats is critical to our understanding of how to protect them,” says Shepherd. “These species are ambassadors of important environments that are rarely included in marine protected areas or sanctuaries. Our goal is to remind the public of the ocean’s vast and unexplored wonders and to inspire its conservation for future generations.”