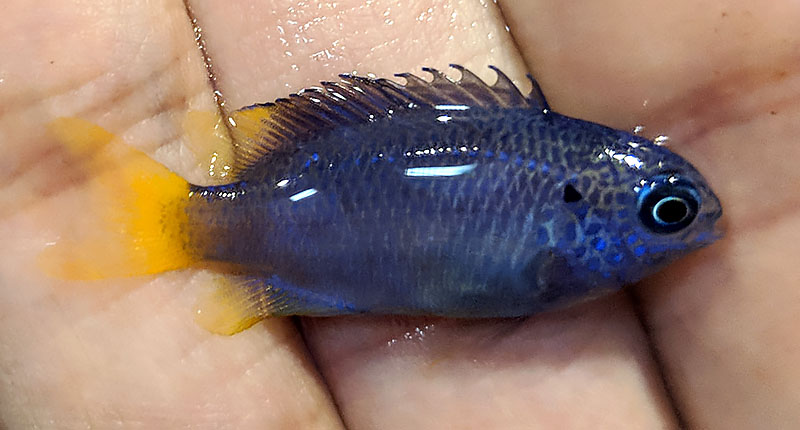 The Sapphire Damselfish, Pomacentrus pavo, is also known as the Peacock Damsel or simply the Pavo Damsel. This species has been on CORAL Magazine’s captive-bred ornamental marine fish species list since we started keeping track in 2013, but it was never commercially available as captive-bred. That changed this week when Florida-based distributor Biota Aquariums announced the availability of captive-bred Sapphire Damsels, reared at the Biota Marine Life Nursery in Palau (Biota Palau).

While naturally widespread, this damselfish isn’t a routine offering in the aquarium trade. With a reputation for being among the more peaceful and social species (for a damselfish), it’s surprising that the species is not more commonly available. Similar, slightly smaller species, collectively known as Neon Damsels, are far more likely to be found in your local fish shop.

Biota Aquariums continues to grow the diversity of fish and corals offered to the trade, having recently added other first-time offerings, including the White Spotted Dwarfgoby (Trimma cf. caesiura, also known as the Grooved Dwarfgoby) and the Pygmy White Spotted Filefish (Rudarius ercodes). Sales Manager Jake Phillips announced the new damsel in the company’s weekly newsletter, writing, “I’m also excited to announce the 3rd new species of fish this month. The Peacock Damselfish (Pomacentrus pavo). This bright blue damsel shows off a light yellow lyretail. They can grow to a size of about 3.5″. They are sparsely available in the hobby wild-caught, but this is a first captive-bred fish for Biota.”

In further discussion, Phillips shared more details about these adorable little damsels. “We are keeping them with the Striped Blennies (Meiacanthus grammistes) and they don’t seem to be too aggressive so far. ”

Just as quickly as they listed the fish, they were sold out. Said Phillips, “We weren’t expecting these to be such a hit. I had a few orders come in basically cleaning them all out. We should have another batch ready soon, but we’re still working on getting better yields, so quantities will be limited.”

Learn more about the Biota Marine Life Nursery in Palau at http://biotapalau.com/