Bloodworm Experiences: Reactions are a real thing for some fishkeepers 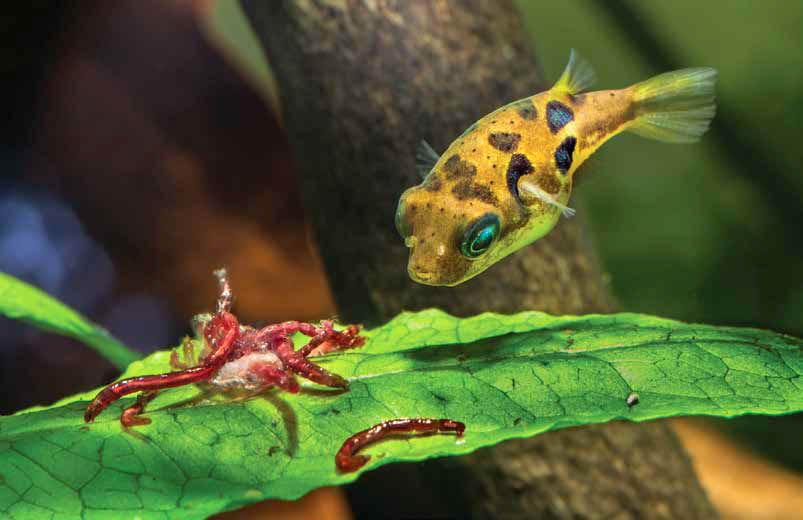 Consider this case: “When I was working in tropical fish retail, we had a customer who was hyperallergic to bloodworms. He usually called ahead to make sure we were not feeding frozen bloodworms for the two or three days prior, because if we did, just walking into the store made him instantly unwell. Keep in mind that the entrance was 25–30 yards away from the fish section. Direct bloodworm exposure would send him to the hospital right away, as we found out the hard way.

“One day, before we knew of his sensitivity, we had fed bloodworms and I bagged fish for him, of course holding the bag with wet hands. A few drops of contaminated water on the outside seeped through the newspaper we wrapped the bag in and when he touched it, he literally fell over backwards. Luckily, he had an EpiPen in his bag. An ambulance rushed him to the hospital. This type of reaction isn’t common, but rashes are quite frequent and bloodworm dust is definitely the worst.”

Whether you have a touch of itchy hands or (rarely) a reaction so severe you’re heading to the ER, bloodworm allergy is a real health concern for some aquarists. A popular, richly nutritious, and extremely effective fish food that is usually sold in frozen or freeze dried versions, these bright red chironomid midge larvae are very attractive to finicky fishes. They are a classic and effective conditioning food and have long been used by aquarium fish breeders to get their broodstock primed for spawning.

Bloodworms get their common name from their bright red coloration, a result of the hemoglobins in their bodies. These hemoglobins are powerful oxygen scavengers that allow the larval chironomids to survive in organic-rich, oxygen-deprived bodies of water. The same hemoglobins are responsible for the allergic reactions that some people have to coming in contact with bloodworms. 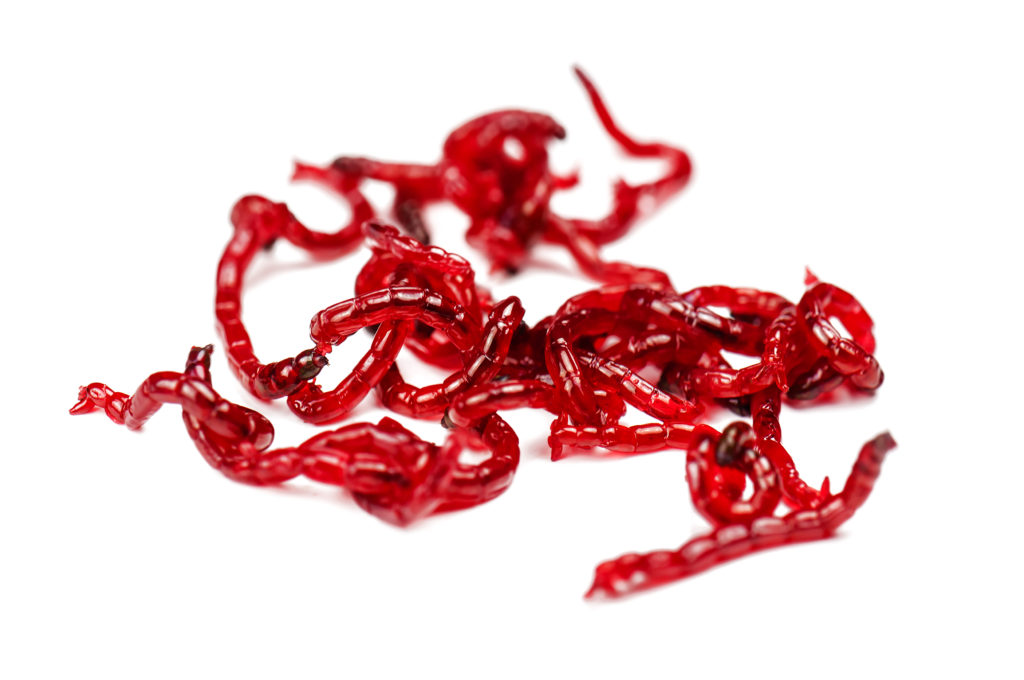 Pigmented by rich hemoglobins, these live bloodworms are a classic fish food used by serious aquarists to feed broodstock and finicky fishes.

Researchers have understood for a long time that bloodworm allergies are found mainly among aquarists. From a 2005 report, Fishing for Allergens: Bloodworm-Induced Asthma: “Although chironomids can be found in Europe, North America, and parts of Asia, allergies to them are mainly due to their use as fish food. Individuals at particular risk of chironomid-induced allergy include fish farmers, fishermen, pet shop owners, and others who keep fish or work with fish” (Wu et al. 2005). 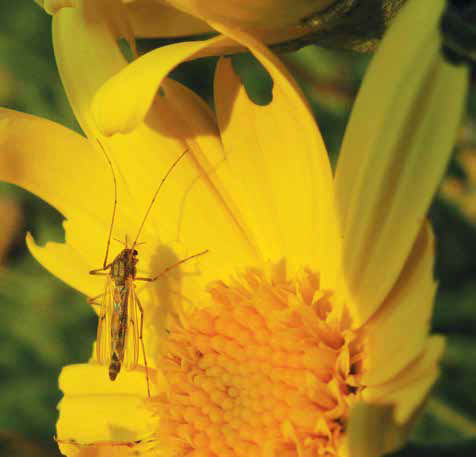 Chironomidae sp. midge female, the adult form of in the bloodworm life cycle. These insects are founding widely in North America, Europe and parts of Asia.

Awareness and pervasiveness of allergy

But how many aquarium enthusiasts are aware of this potential health hazard? AMAZONAS Magazine sought to get a clearer picture of bloodworm allergies in the aquarium hobby, and in May 2018 we conducted an informal online survey of aquarists, receiving 445 responses from the magazine’s readers.

Nearly 99 percent of respondents said they had fed bloodworms to their fishes, yet a full 40 percent were unaware of the allergy risk prior to our survey.

A large minority of respondents (47 percent) self-identified as being free from bloodworm allergy. However, 34 percent identified themselves as having a known or suspected allergy to bloodworms, and 19 percent said they were “unsure.”

Reporting that one in three aquarists may have a bloodworm allergy seems extremely high and raises the question of participation bias: were people who believe they have an allergy more likely to participate than those who don’t? Perhaps, although an earlier study (Bauer 1992) had remarkably similar findings—36.1 percent of people who had “hobby-related” exposure to bloodworms showed sensitivity to the associated allergens in bloodworms.

How do bloodworm allergies present?

Of the people reporting symptoms in response to bloodworm contact, 25 percent had a reaction the very first time. Of those who didn’t have an immediate reaction, 30 percent had an allergic reaction within a year’s time, and the median time to first reaction was four years.

Symptoms of a bloodworm allergy are readily identifiable (see table). Severity of reaction was rated on a scale of 1 to 10; very mild (tolerable, requiring no mediation) to most severe (potentially requiring a trip to the emergency room). Among individuals who initially responded that they were “unsure” if they had a bloodworm allergy, the average severity rating of symptoms was 2.9/10. Of the people who identified as having a known or suspected allergy, the average rating was 5.6/10. 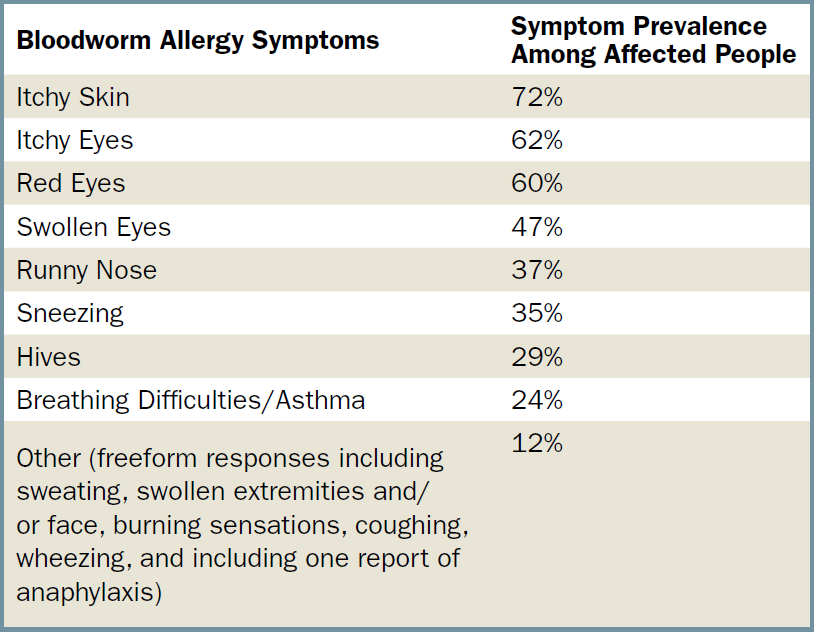 A rundown of symptoms reported by survey respondents who had known or suspected bloodworm allergies.

A full 64 percent of the respondents who reported having known or suspected allergies said they were still coming into contact with bloodworms. When asked what they were doing to prevent or minimize bloodworm-associated problems, solutions included hand-washing (although often noted as ineffective) and minimizing contact by wearing gloves, using feeding tongs, feeding proportioned frozen worms (which require no direct handling), and wearing face masks. Others noted that only certain forms of the food caused reactions; multiple respondents said they avoid freeze-dried bloodworms but seem okay when working with frozen forms. But many, once they realized they were allergic, opted to avoid bloodworms entirely. 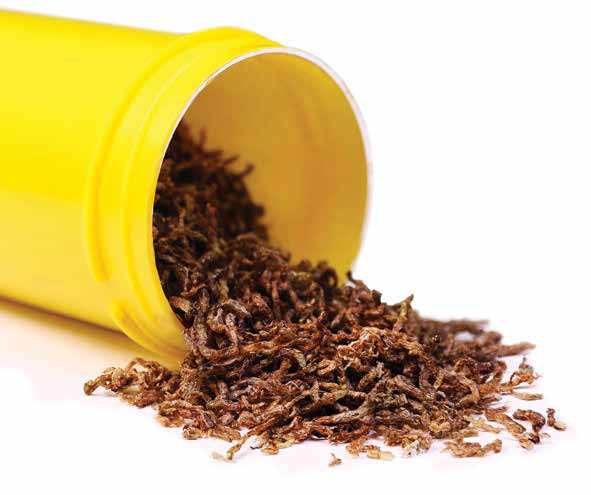 Dried bloodworms are anecdotally reported to cause more allergic reactions, but contact with frozen or live worms can also have effects on those with sensitivity to the hemoglobins in these insect larvae.

“With the increasing popularity of aquariums, allergy to chironomids may become less of a novelty and become something clinicians should be aware of when searching for the cause of a patient’s atopic symptoms,” concluded researchers Keith CP Wu and colleagues in 2005. In other words, if you feed bloodworms, keep this information in mind should you wind up going to the doctor with symptoms.

If you are experiencing symptoms, it’s best to get medical help or advice

To take our three- to twelve-question bloodworm allergy survey, see a more detailed breakdown of the data on which this report was based, get more information, and read the stories of other aquarists, please visit our online Bloodworm Survey Hub at http://www.reef2rainforest.com/bloodworm-allergy

Warning: Bloodworm Allergies Are Real for Some People