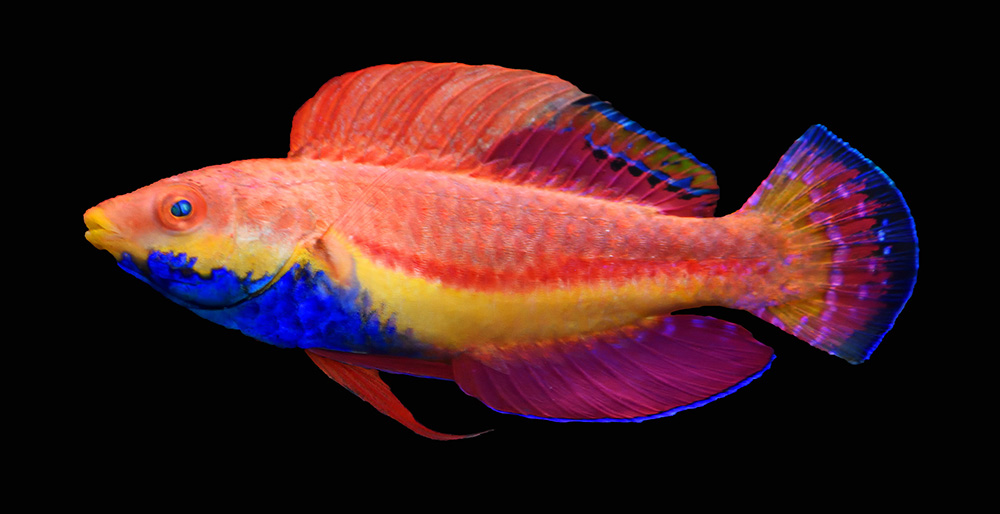 BREAKING NEWS: This just in: The new, gorgeous, and aptly-named Blue Throat Wrasse, Cirrhilabrus cyanogularis, has just been introduced by authors Yi-Kai Tea, Benjamin W. Frable, and Anthony C. Gill. This new species is described from specimens collected in the Philippines and Indonesia. The species description is freely available as an open-access article via Zootaxa.

When I discussed this discovery with lead author Yi-Kai Tea (a.k.a. “Lemon” in most aquarium circles), he shared some interesting personal insights about the discovery and what it means for the Labridae/Wrasse family.

“I originally thought this was a hybrid, years ago when I saw photos of it. But after encountering so many specimens, I realized it’s a new species.

“It’s also one of four species in the Rubripinnis Complex (species closely resembling Cirrhilabrus rubripinnis), and one of 16 fairy wrasses with an apomorphic character—having one row of cheek scales instead of the usual two.

“This is the 59th species of fairy wrasse, which makes Cirrhilabrus the largest genus of labrid at this time.”

You can view many more images of male Blue Throat Fairy Wrasses in the Zootaxa Publication: Cirrhilabrus cyanogularis, a new species of fairy wrasse from the Philippines and Indonesia (Teleostei: Labridae)