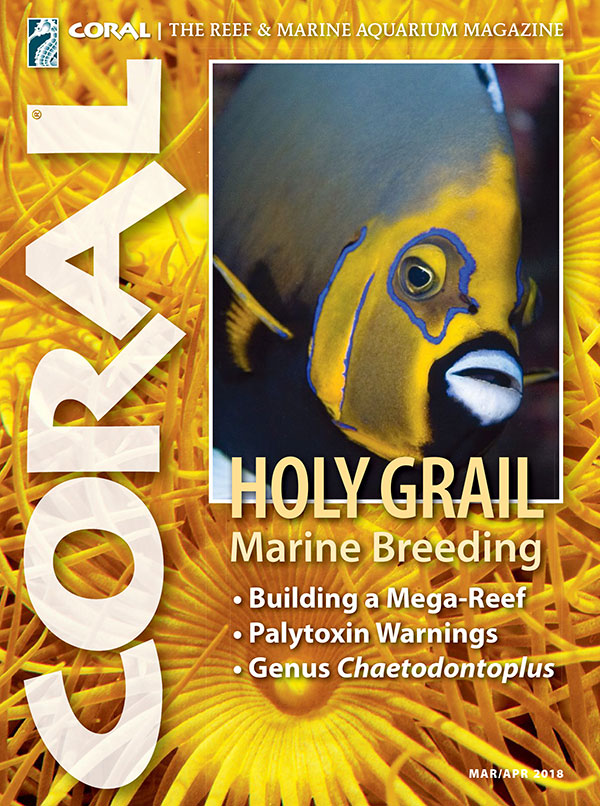 CORAL Magazine’s annual look at the world of marine aquarium-fish breeding returns in our March/April issue, HOLY GRAIL Marine Breeding, with additional cover stories including building a mega reef tank and a fresh look at palytoxin. The magazine is printed and on its way to subscribers, local aquarium shops, and select bookstores—on sale March 6th, 2018, at the best marine aquarium retail stores and leading Barnes & Noble stores everywhere. 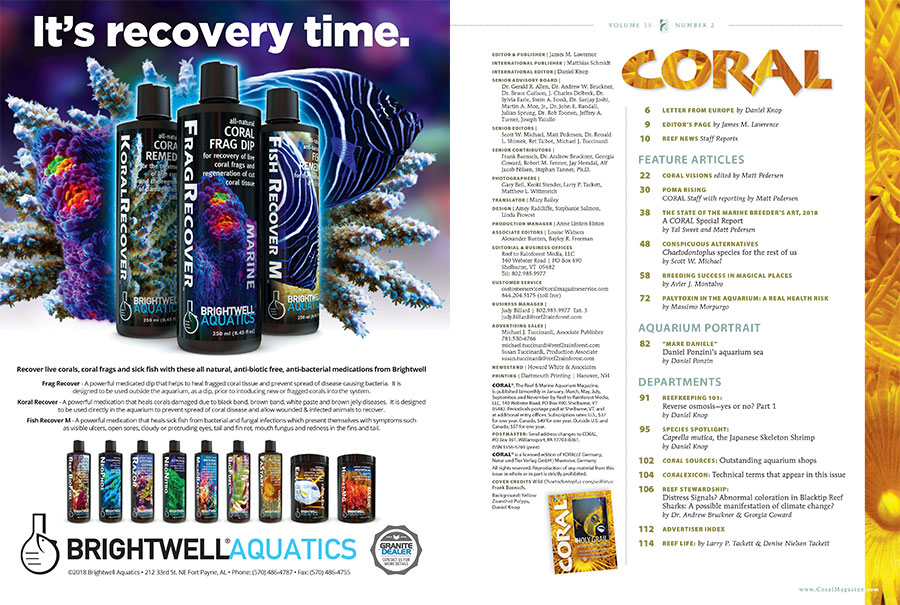 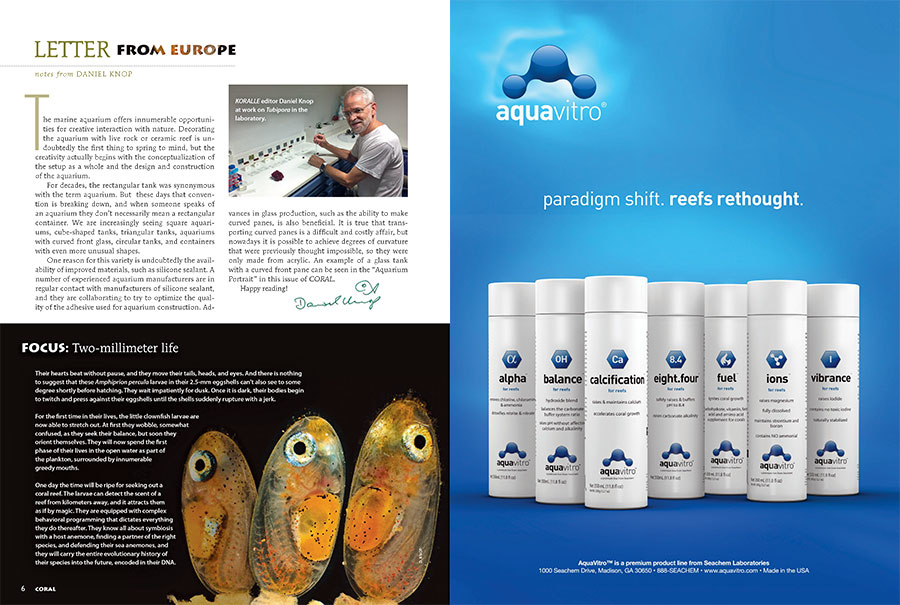 Daniel Knop discusses the evolution of the aquarium from simple rectangular container to complex configurations formerly not considered possible. Find out what’s driven this evolution in his Letter from Europe. 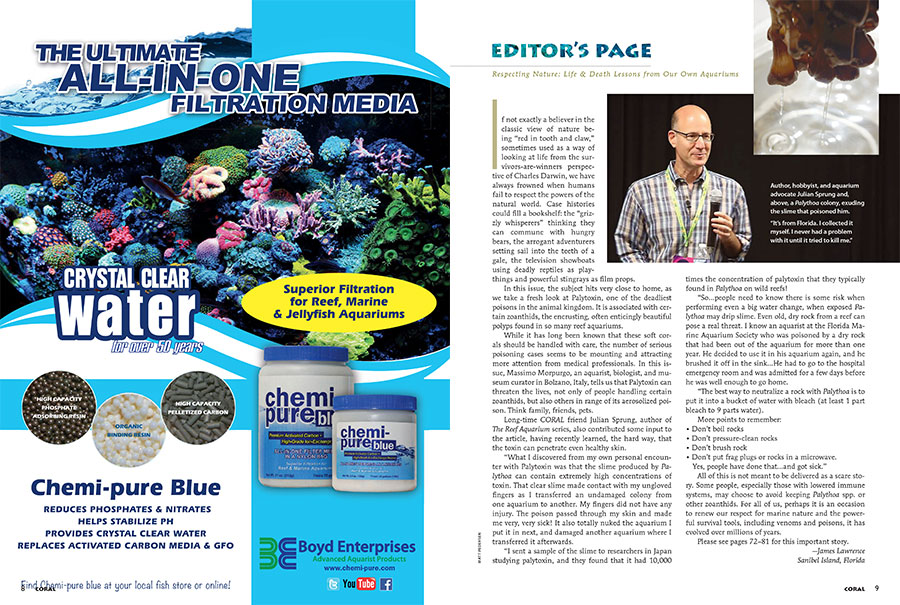 “In this issue,” writes CORAL publisher James Lawrence, “…we take a fresh look at Palytoxin, one of the deadliest poisons in the animal kingdom.” Veteran aquarist Julian Sprung reveals that even the most experienced among us are not immune. 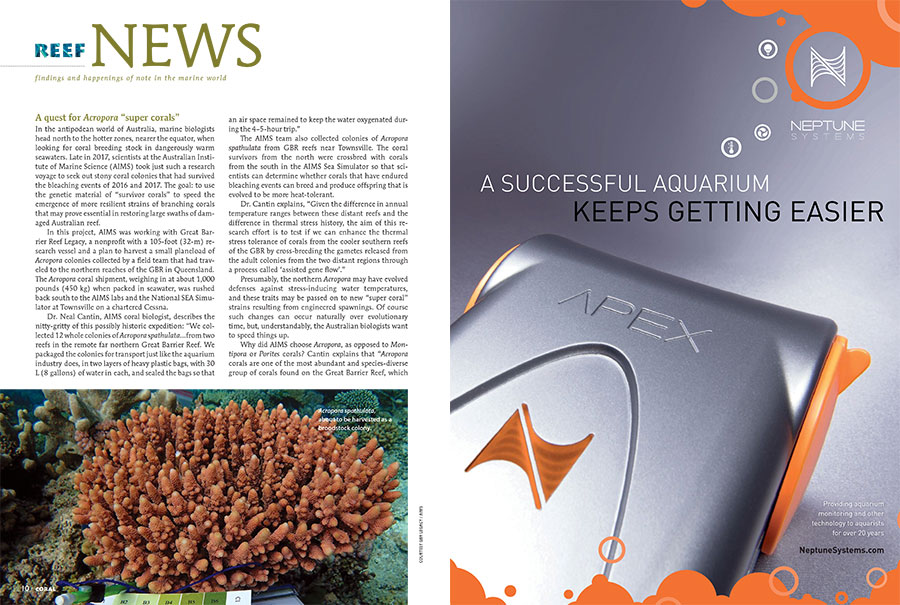 A quest for Acropora “super corals,” how bacteria aid digestion in Red Sea surgeonfishes, mathematically predisposed cutttlefish, the odd intersection of jellyfish protein and lasers, and a new genus of protozoa aptly named Cafeteria: all stories in the newest edition of CORAL Magazine’s Reef News. 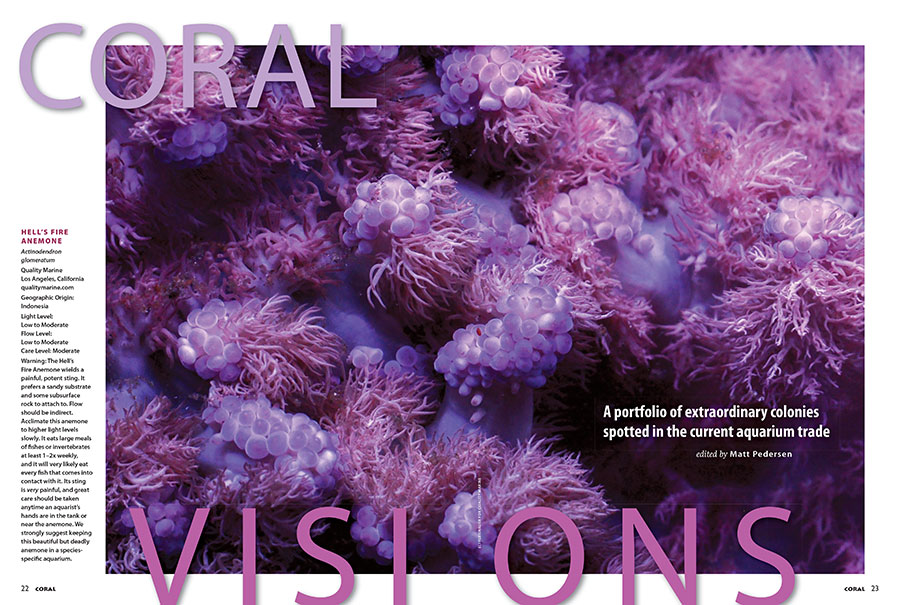 What is this stunning purple cnidarian, photographed by Eli Fleishauer of Quality Marine, which opens this issue’s Coral Visions column? You’ll have to click to enlarge this image or read the newest issue to find out! 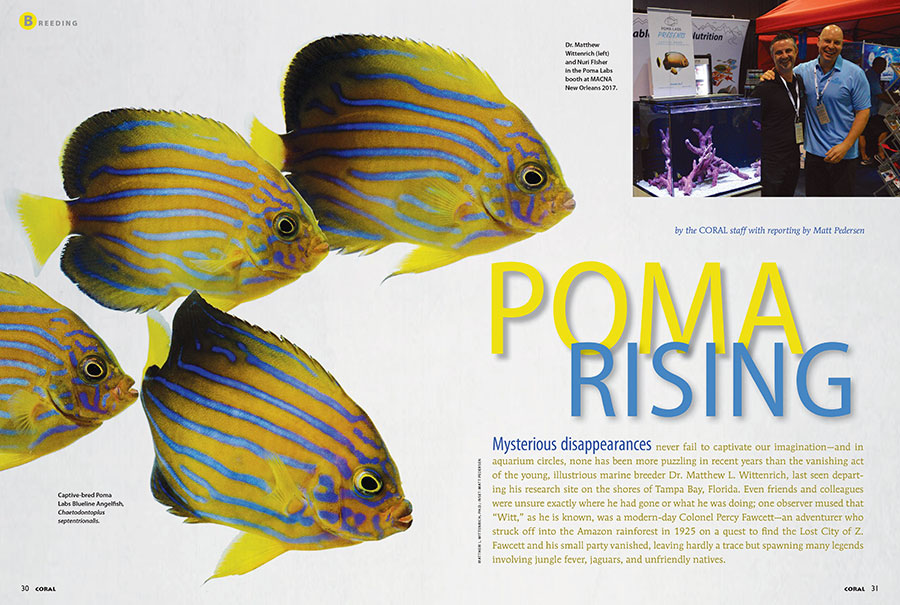 Their captive-bred Conspicuous Angelfish stunned MACNA attendees in 2017. Now, in the CORAL Magazine exclusive report, “Poma Rising,” Dr. Matthew L. Wittenrich and Nuri Fisher of Poma Labs explain how they kept their project a secret for nearly half a decade. 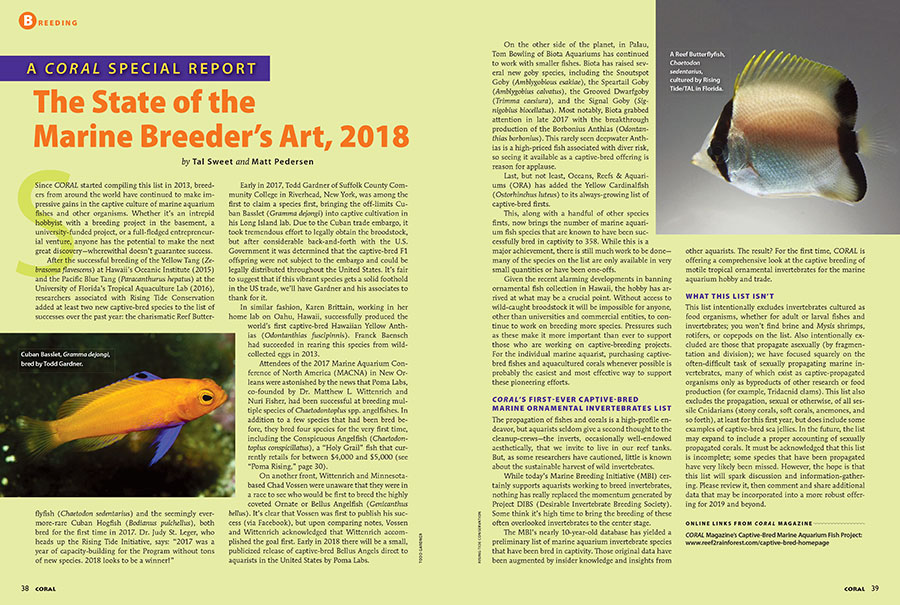 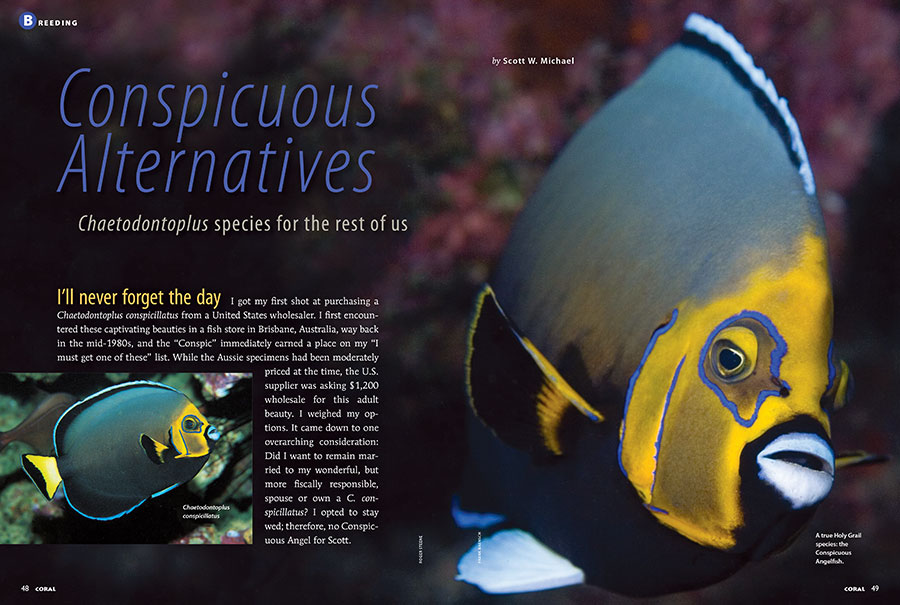 Not everyone can afford a Conspicuous Angelfish, captive-bred or otherwise. Thankfully, Scott W. Michael presents Chaetodontoplus species for the rest of us in his latest contribution, “Conspicuous Alternatives.” 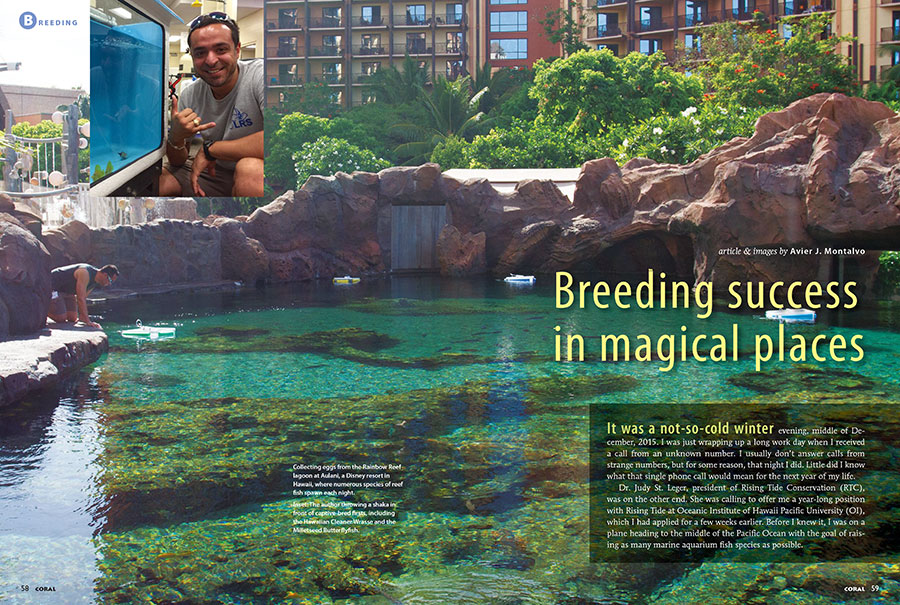 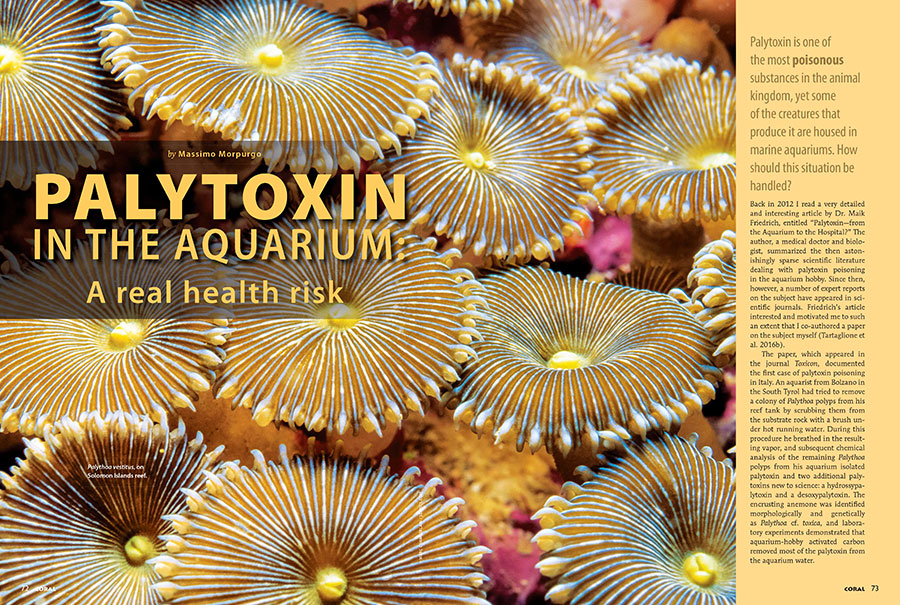 Palytoxin is one of the most poisonous substances in the animal kingdom, yet some of the creatures that produce it are housed in marine aquariums. How should this situation be handled? Italian biologist Massimo Morpurgo gives you the answers in “Palytoxin in the Aquarium: A real health risk.” 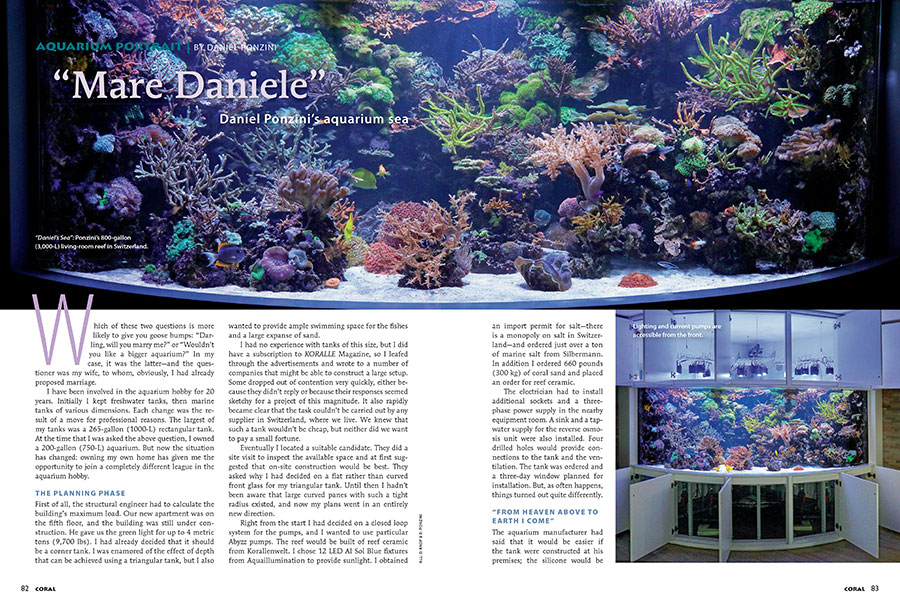 What exactly does the installation and maintenance of an 800-gallon aquarium entail? Find out in “Mare Daniele,” the story of Daniel Ponzini’s Swiss aquarium, our latest Aquarium Portrait. 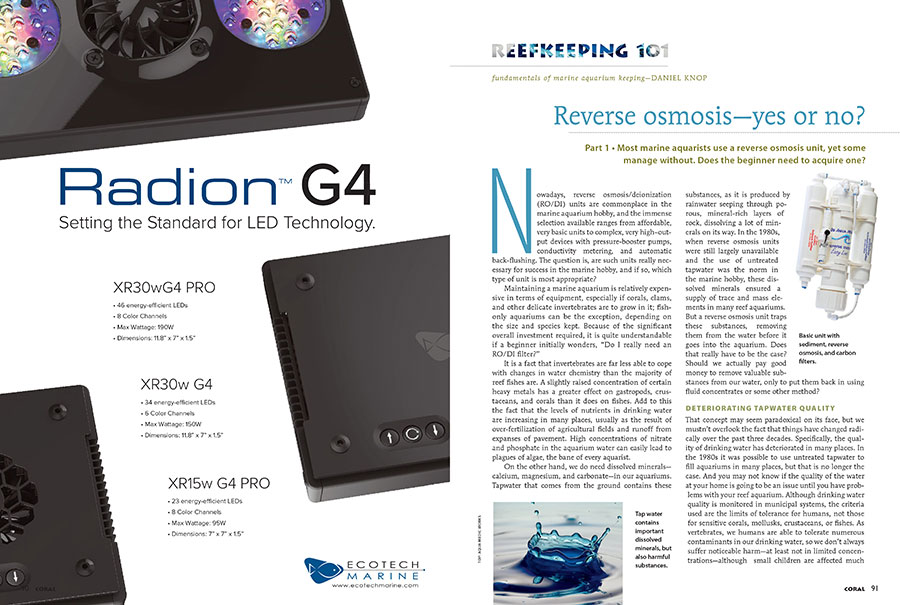 Most marine aquarists use a reverse osmosis unit, yet some manage without. Does the beginner need to acquire one? Daniel Knop examines that question in the latest installment of our Reefkeeping 101 column. 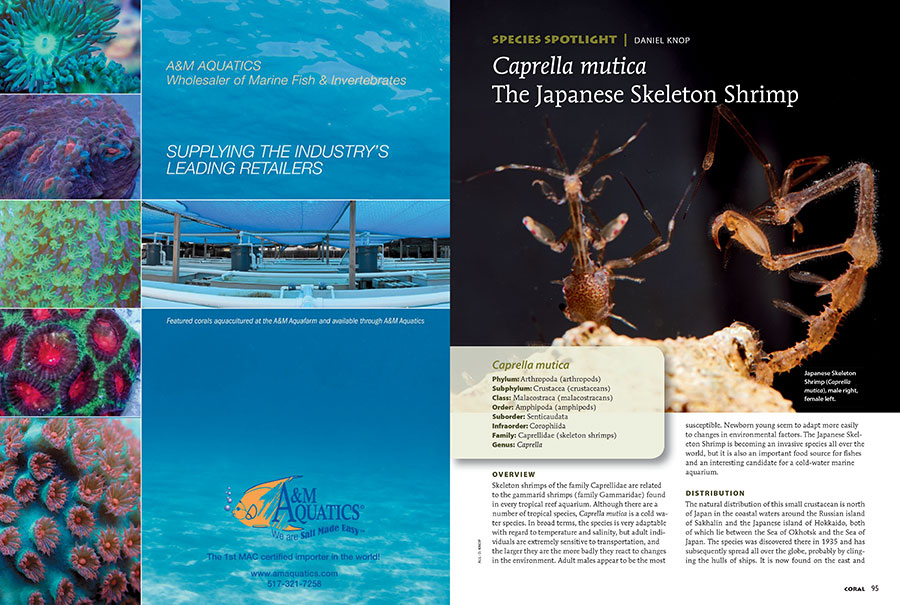 Creepy! Learn all about the cool(-water) Japanese Skeleton Shrimp, Caprella mutica, in our Species Spotlight. It turns out that this tiny invertebrate is invading waters around the globe. 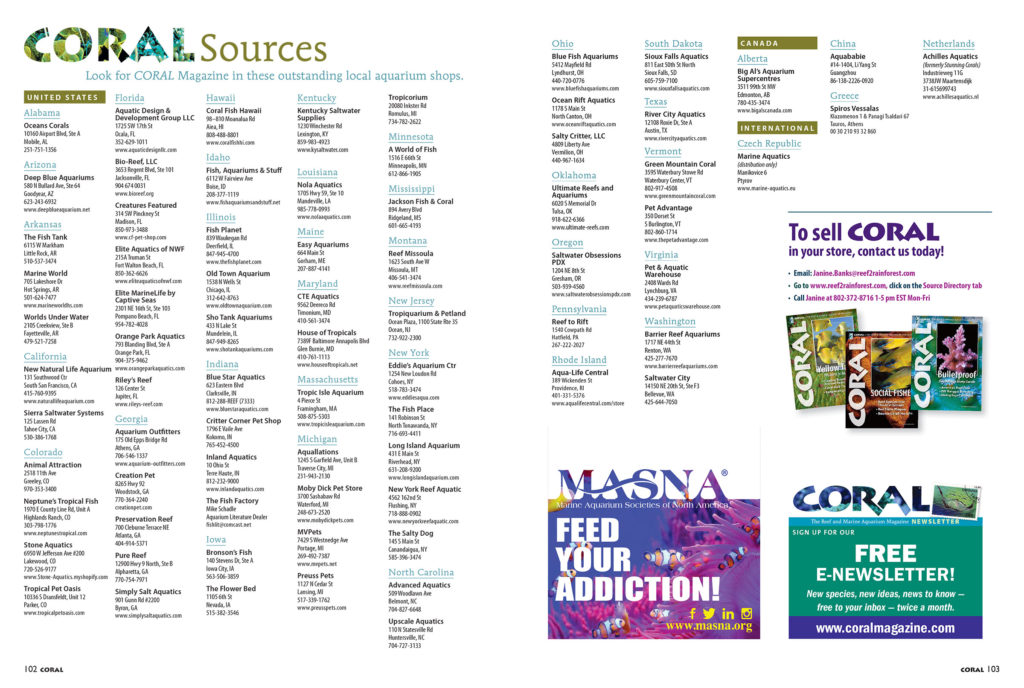 Find CORAL Magazine for sale as single issues at the VERY BEST aquarium retailers. Our sources list is always available online, which is handy when you’re looking for a new local fish shop in your area! 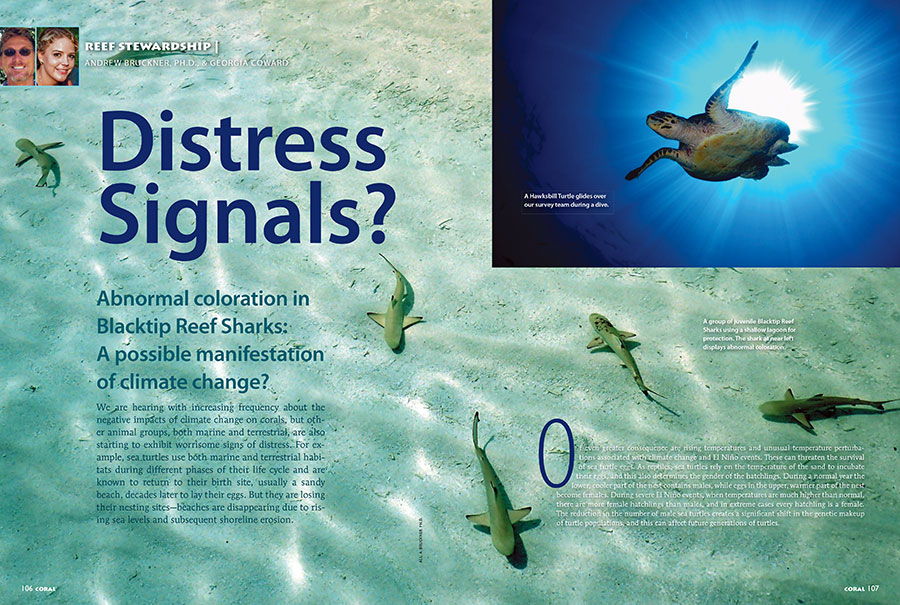