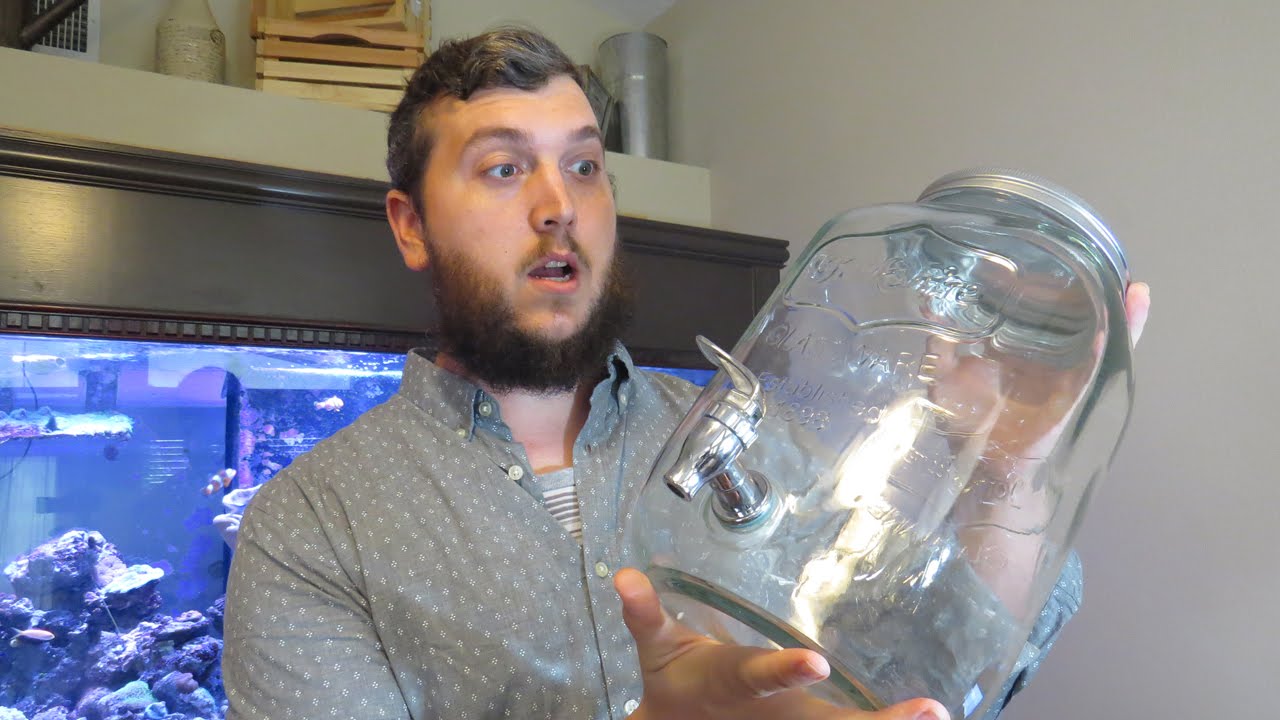 YouTuber Joey Jones of TheCoralReefTalk went all in on a Mason jar reef in 2016. But things maybe haven’t gone quite as planned…

Joey Jones of the YouTube channel TheCoralReefTalk embarked on his own Mason Jar reef tank project in 2016. While we’ve shown off many successful, often long-term aquariums, Jones seems to have taken a different approach than the others we’ve featured.

As I wrote in the January/February 2018 issue of CORAL Magazine, experimentation is at the heart of the pico reef phenomenon; if you take well-reasoned chances, be sure to share your successes and failures as you go. And that’s exactly what Joey Jones has done.

When searching for my own perfect “vase reef” container, I scoured Walmart, Target, Hobby Lobby, and Pier One before ultimately settling on an attractive apothecary vase from Michael’s. On more than one occasion, I stopped to look at the glass beverage dispensers and wondered if they’d be usable. Was there something metal that could corrode? Would the valve stand up to long-term use, or would it start to leak?

Well, Jones took the gamble and went with this kind of setup, using a beverage dispenser as his tank choice. Seeing how he uses a standpipe to set a minimum water level for water changes is an interesting concept; of course, it also has me thinking about going a step further and using the existing hole as an avenue towards creating a full blow recirculating system with surface skimming and a sump underneath. But, then again, that’s not really what I think micro reefkeeping is all about. (Editor: Others disagree.)

It seems that, despite several months of forward progress, Jones may have committed a cardinal sin of micro reefkeeping, and the tank pays the price. As he says in his introduction, “OK, so I’ll have to admit that this reef tank in a jar has definitely been a new experience for me, and I started off on the right track. Everything was going really well, and then things got busy. And mix a little bit of busy with a little bit of neglect, and things can go bad, really, really fast. So, what happened?”

Well, to borrow from Brandon Mason’s advice in his CORAL Magazine article Micro Reefing Master Class: “Micro reefing allows excellent hands-on control over what the tank does. We make the changes that the system requires and we do it deliberately, knowing the outcome will be reflected in better coral growth. Direct action in response to a problem works best for small reefs.”

In other words, don’t wait for something to get out of hand.

Watch Jones explain his mistake, which he shares in the hope that you, the new micro reefkeeper, won’t repeat it!

Oh, we feel Jones’ pain as he shares this latest update on his micro reef. In such tight quarters, even something as benign as a hermit crab can really become a problem animal.

Destroyer of Worlds? One small creature may have earned that title in Jones’ Mason jar reef. It’s so simple to avoid this problem in hindsight, but we’ll let Jones explain this latest problem himself when you watch the footage below.

Jones’ tenacity and transparency are admirable, and we wish you tons of luck getting this reef up to speed. You can catch all of Joey Jones’ Mason Jar Reef Tank videos in his YouTube Playlist.