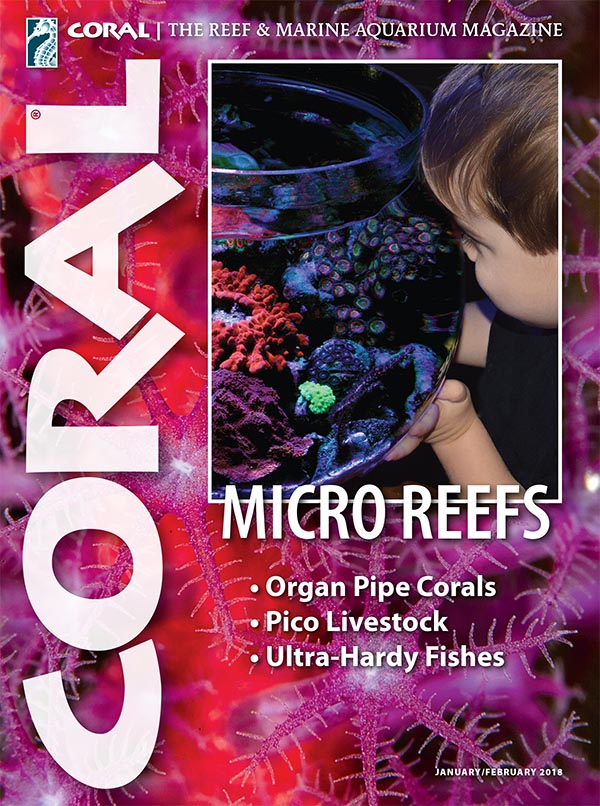 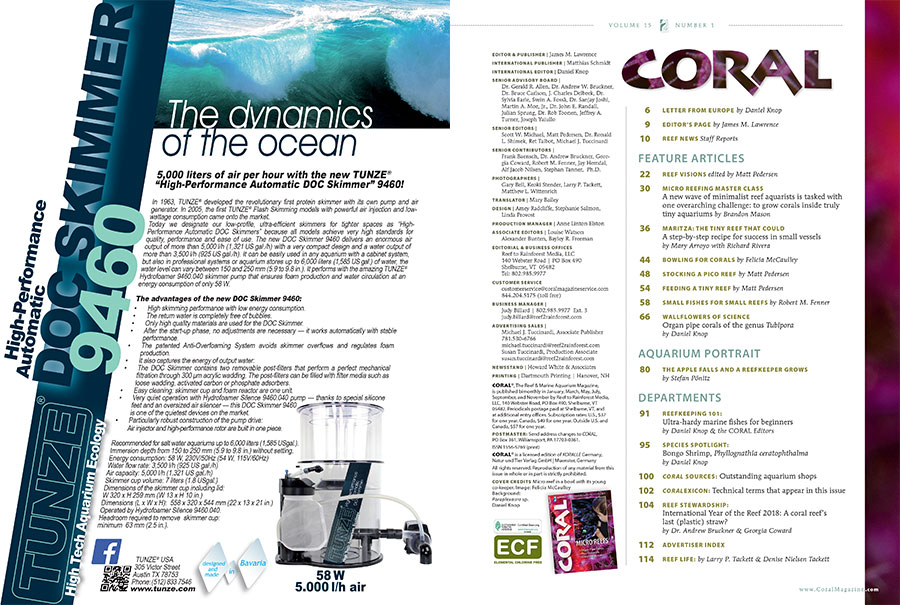 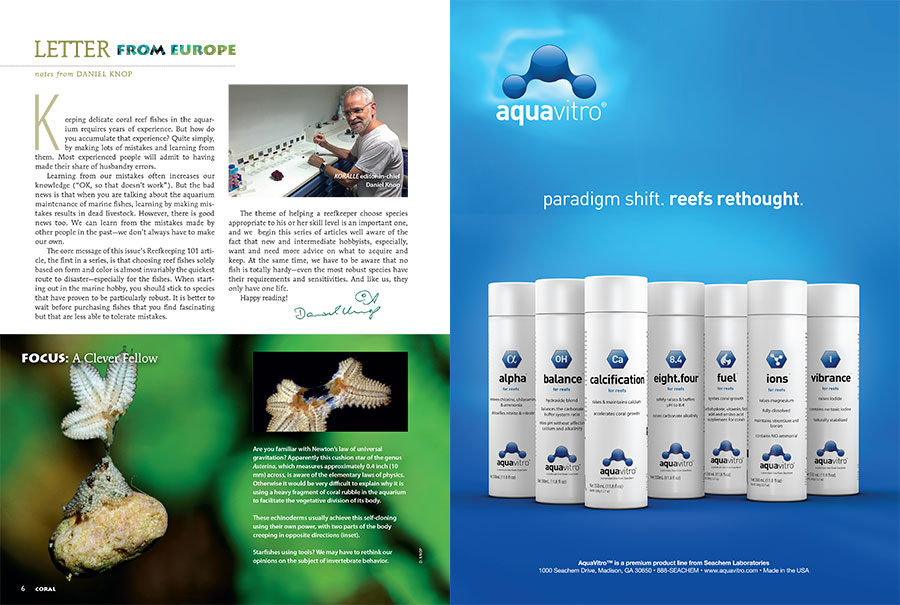 Daniel Knop examines the nature of aquarium experience and learning from mistakes. “The core message of this issue’s Reefkeeping 101 article, the first in a series on the best fish species for new aquarists, is that choosing reef fishes solely based on form and color is almost invariably the quickest route to disaster.” Our latest Reefkeeping 101 series will get the new reefkeeper on the path to success, learning from the mistakes of others instead of making your own! 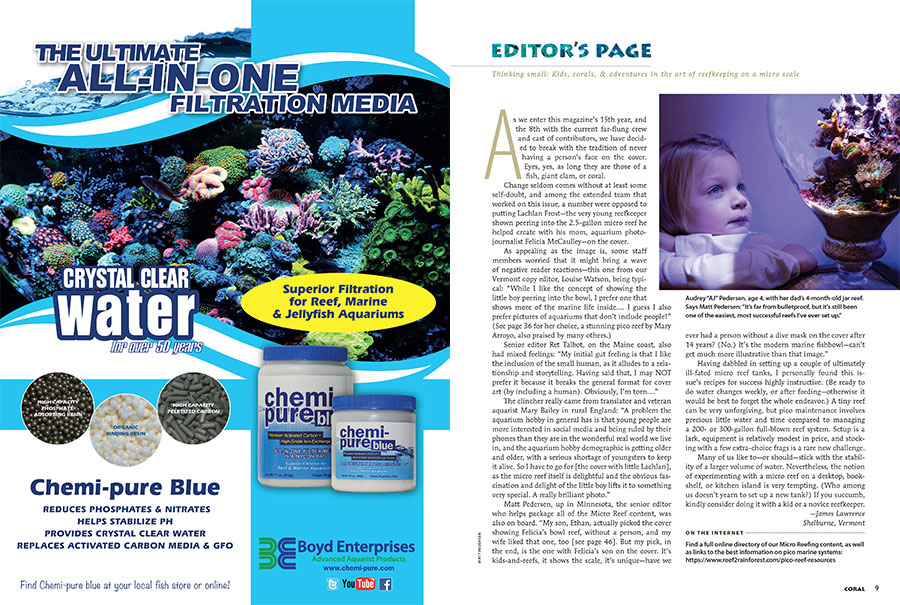 “Having dabbled in setting up a couple of ultimately ill-fated micro reef tanks, I personally found this issue’s recipes for success highly instructive…A tiny reef can be very unforgiving, but pico maintenance involves precious little water and time compared to managing a 200- or 300-gallon full-blown reef system. Setup is a lark, equipment is relatively modest in price, and stocking with a few extra-choice frags is a rare new challenge.” -CORAL editor & publisher James Lawrence, introducing our feature topic for the issue. 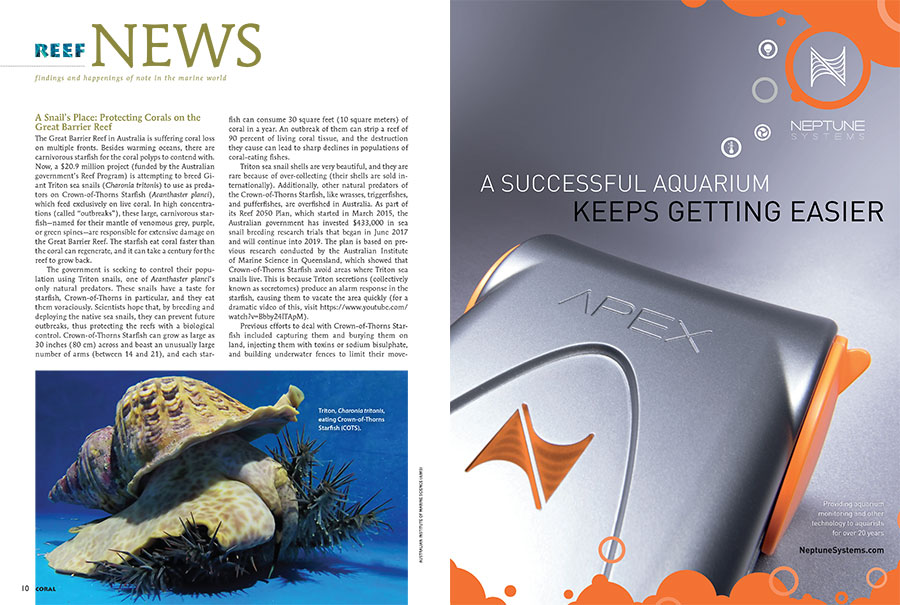 Changing life under Antarctic sea ice, an explosion in Triplefin populations, and Triton Snails in the battle against the Crown of Thorns Starfish: all stories in the newest edition of CORAL Magazine’s Reef News. 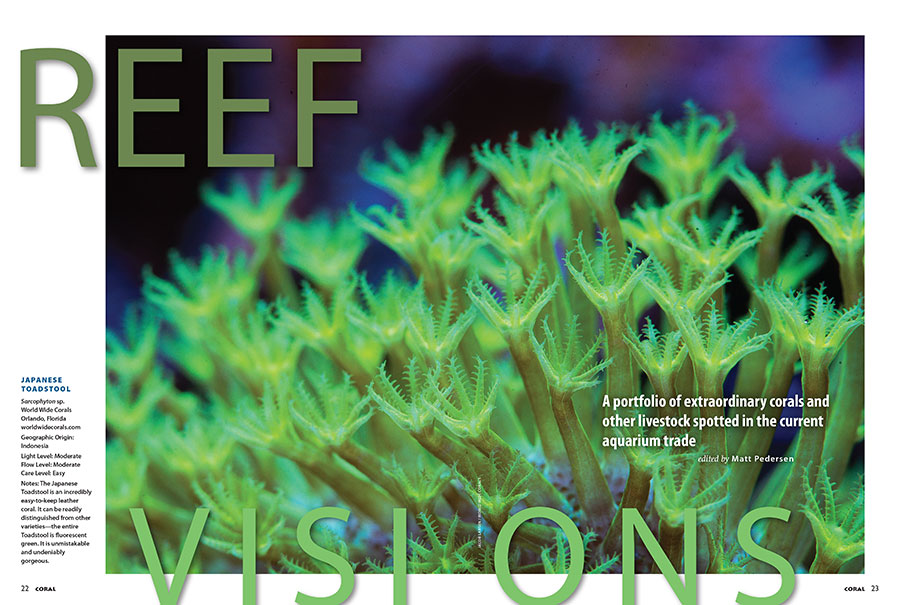 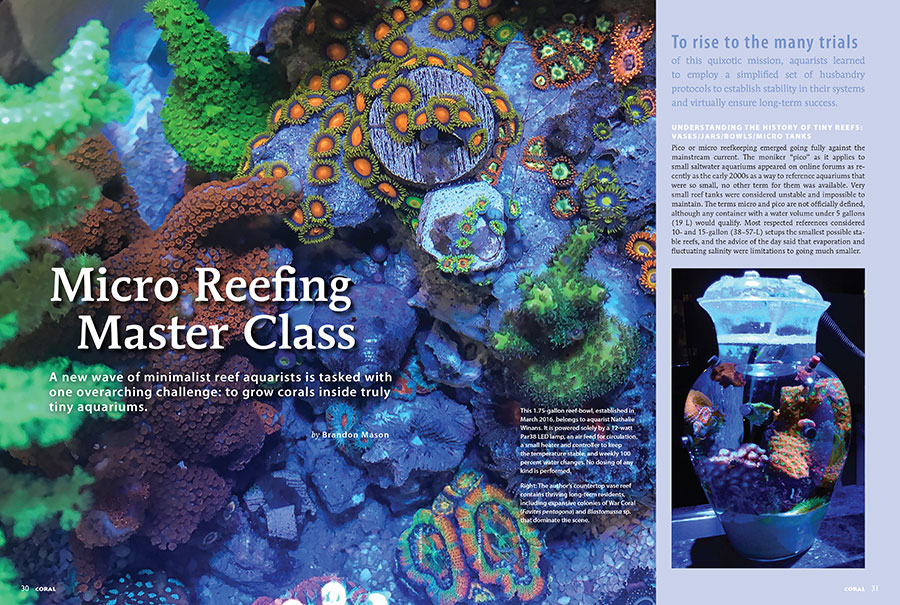 We hope you’re ready after winter break, because school is back in session. Are you prepared to take Brandon Mason’s “Micro Reefing Master Class”? Your class project is to grow corals inside truly tiny aquariums. 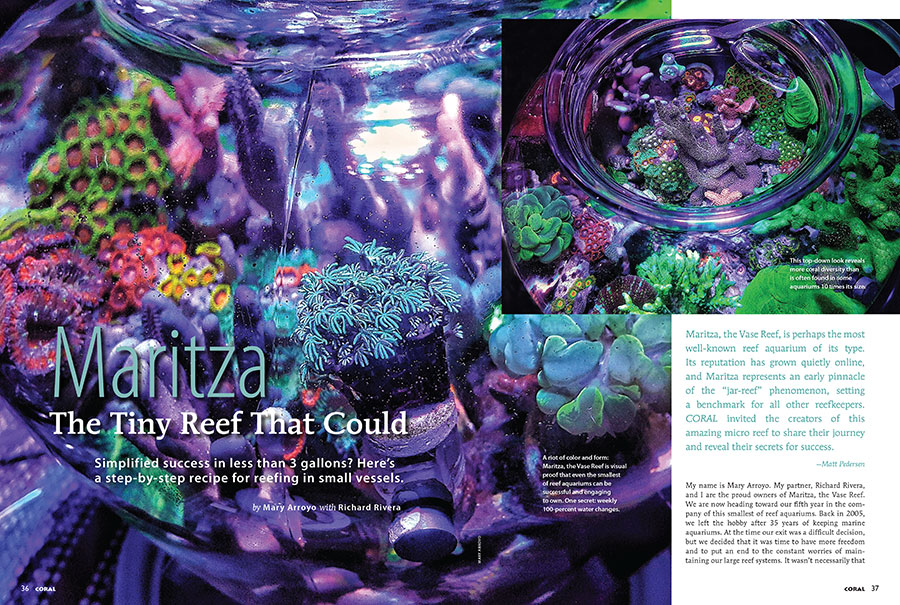 Simplified success in a vessel with less than 3 gallons? Here’s a step-by-step recipe for reefing in very small tanks, from Mary Arroyo and Richard Rivera, the brains behind Maritza, the Vase Reef. 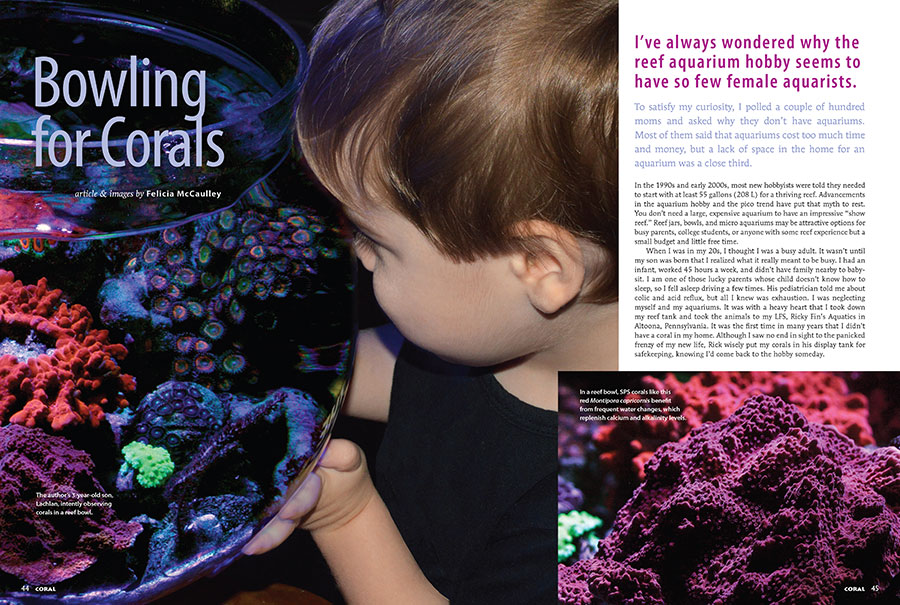 Struggling with first-time motherhood, Felicia McCaulley had to put reefkeeping out of her life for a time. But as any experienced aquarist knows, aquariums find a way to get back into your life. For McCaulley, the reef bowl was the perfect solution to the problems of time, space, and money. 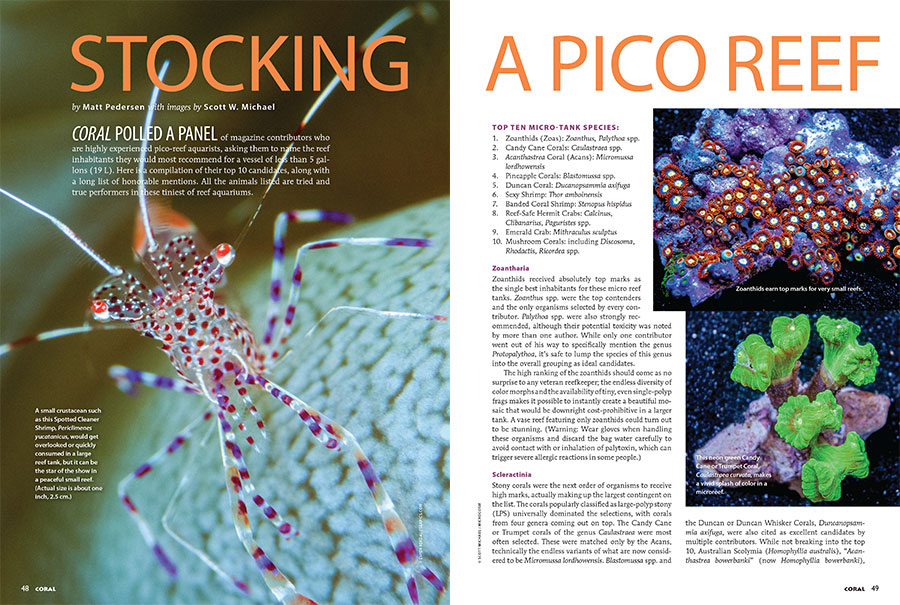 Continuing our theme of leveraging the experience of others, several veteran pico reef aquarium keepers were asked, “What are your top 10 pico reef inhabitants?” The results are in, and Matt Pedersen shares them all, plus dozens of well-suited honorable mentions that will be sure to perform well in even the smallest of reef aquaria. 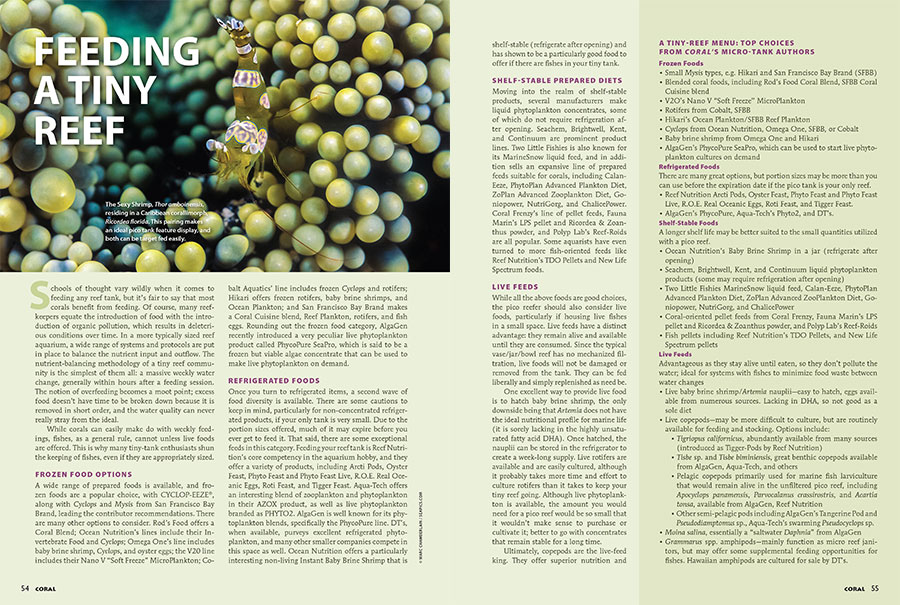 Pico reef aquarists find that feeding is integral to success with the smallest of reef aquariums. Matt Pedersen surveys the diversity of options available to the micro reefkeeper. 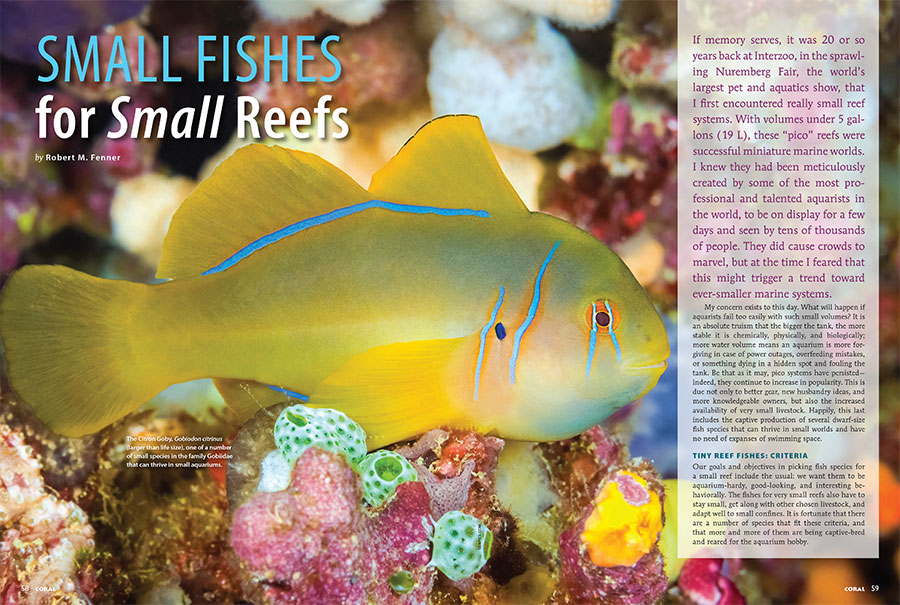 Regular CORAL contributor and bestselling author Bob Fenner shares his thoughts on the right fishes for the smallest reef aquariums. 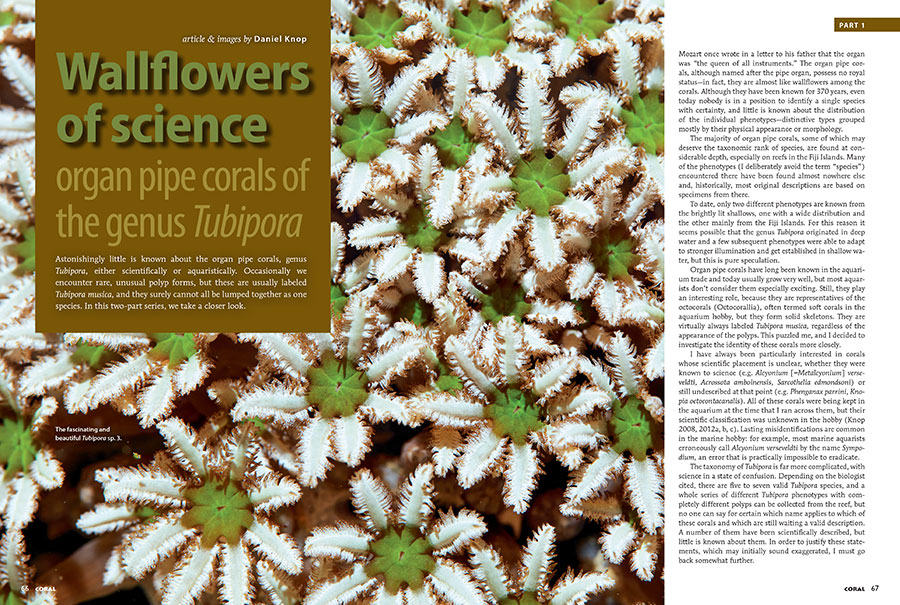 Certain to change your thinking and expand your view, Daniel Knop starts a two-part series looking at the Organ Pipe Corals of the genus Tubipora, writing that “Astonishingly little is known about the organ pipe corals, genus Tubipora, either scientifically or aquaristically. Occasionally we encounter rare, unusual polyp forms, but these are usually labeled Tubipora musica, and they surely cannot all be lumped together as one species. In this two-part series, we take a closer look.” 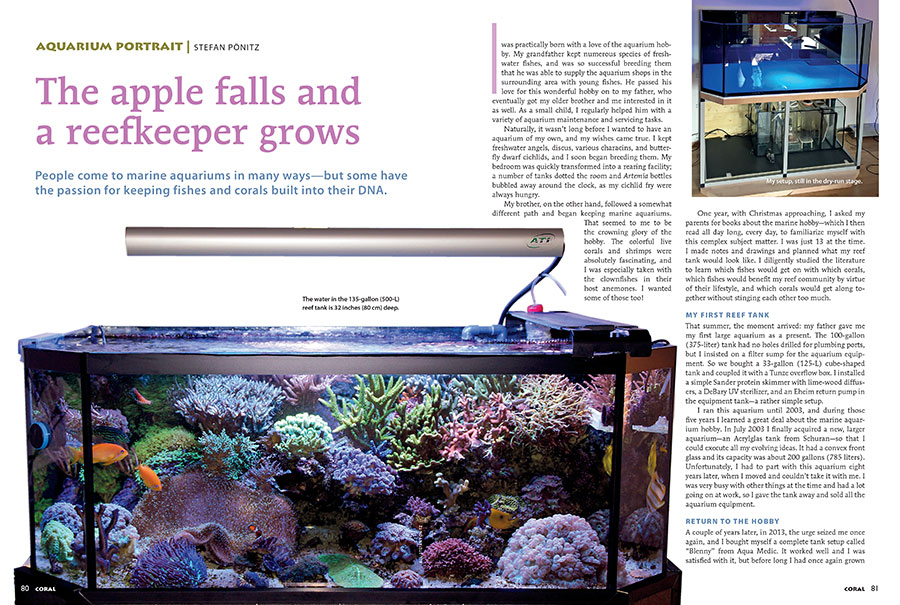 The apple falls and a reefkeeper grows: People come to marine aquariums in many ways—but some have the passion for keeping fishes and corals built into their DNA. Meet Stefan Pönitz in this issue’s Aquarium Portrait. 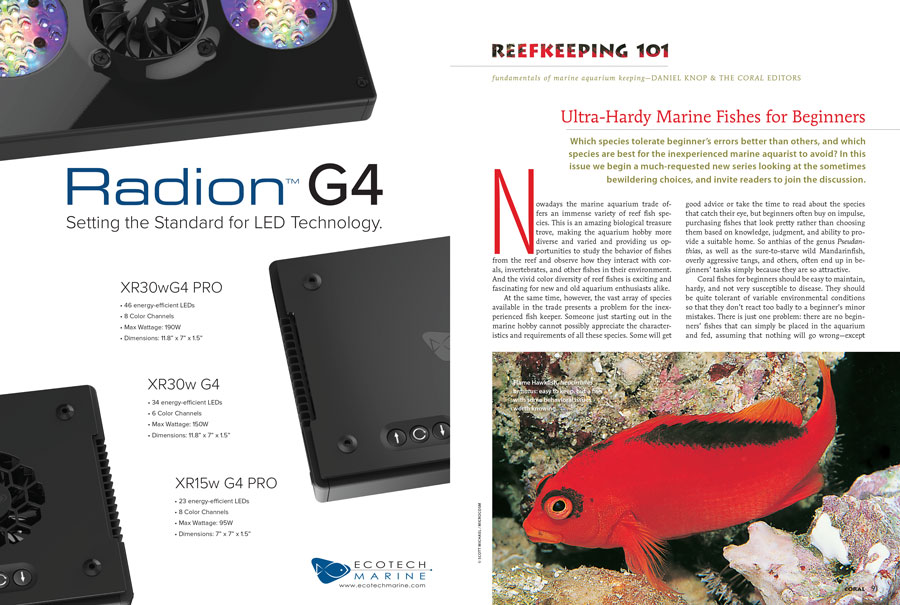 Which species tolerate beginners’ errors better than others, and which species are best for the inexperienced marine aquarist to avoid? In this issue we begin a much-requested new series looking at the sometimes bewildering choices, and invite readers to join the discussion. 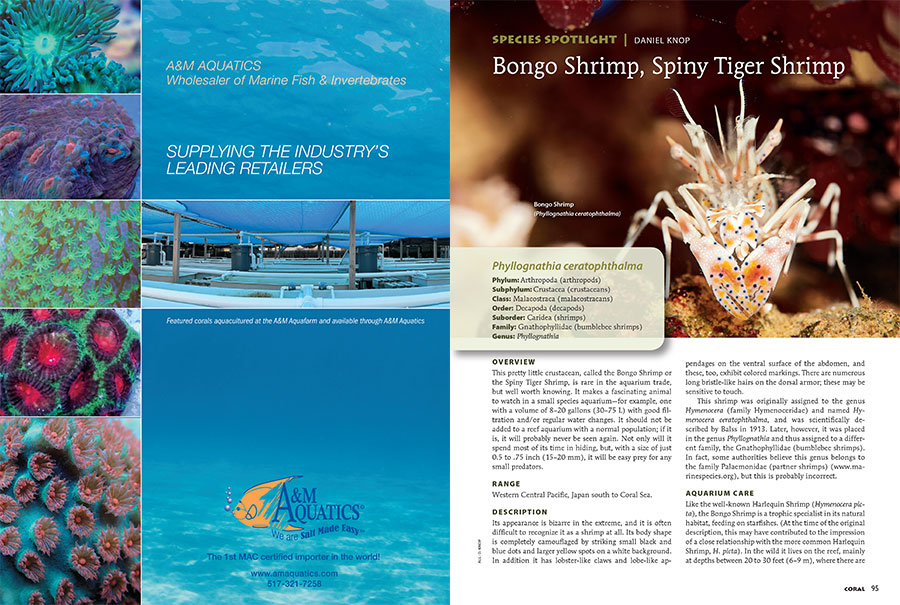 This pretty little crustacean, called the Bongo Shrimp or the Spiny Tiger Shrimp, is rare in the aquarium trade, but well worth knowing. It makes a fascinating animal to watch in a small species aquarium—learn more in Daniel Knop’s Species Spotlight. 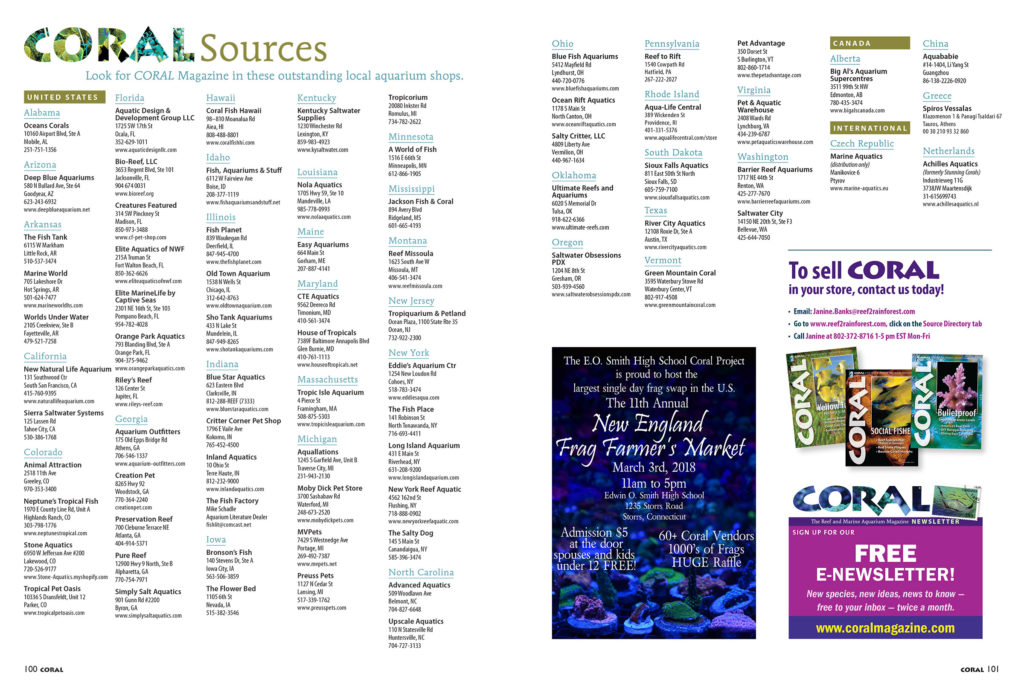 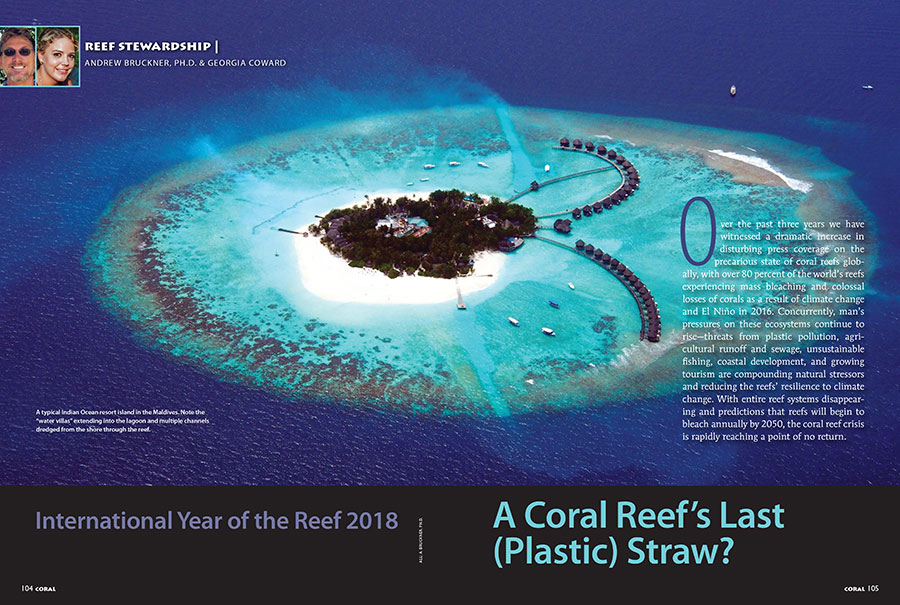 With entire reef systems disappearing and predictions that reefs will begin to bleach annually by 2050, the coral reef crisis is rapidly reaching a point of no return. Is this A Coral Reef’s Last (Plastic) Straw? Read more in our Reef Stewardship column from Andrew Bruckner, Ph.D., and Georgia Coward.