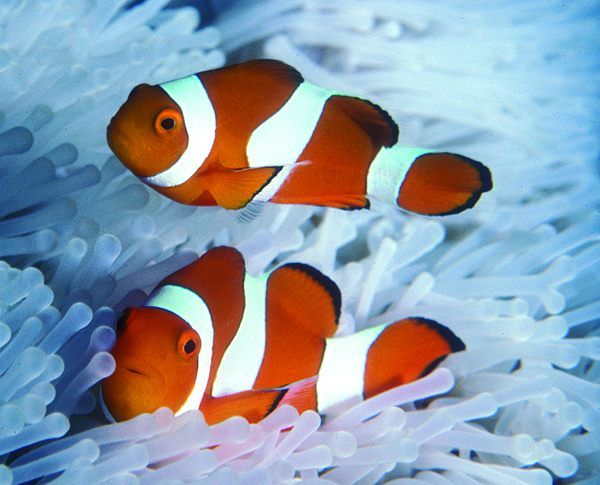 Download Original Paper from the Journal of Ocean Science Foundation 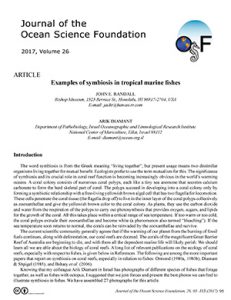 The word symbiosis is from the Greek meaning “living together,” but in present usage it usually means two dissimilar organisms living together for mutual benefit. Ecologists today prefer to use the term “mutualism” for this. The significance of symbiosis and its crucial role in coral reef function is becoming increasingly obvious in the world’s warming oceans.

A coral colony consists of numerous coral polyps, each like a tiny sea anemone that secretes calcium carbonate to form the hard skeletal structure of a Scleractinian coral. The polyps succeed in developing into a coral colony only by forming a symbiotic relationship with a free-living yellowish-brown algal cell that has two flagella for locomotion. The flagella drop off, and the cells penetrate the coral tissue to live collectively in the inner layer of the coral polyps as zooxanthellae, giving the coral colony its yellowish-brown color. As plants, the zooxanthellae use the carbon dioxide and water from the respiration of the polyps to carry out photosynthesis that provides oxygen, sugars, and lipids for the growth of the coral. All this takes place within a critical range of sea temperature. If it is too warm or too cold, the coral polyps extrude their zooxanthellae and become white (a phenomenon known as “bleaching”). If the sea temperature soon returns to normal, the corals can be reinvaded by the zooxanthellae and survive.

Remembering our success in saving the American Bison and the California Condor from extinction, we believe we should endeavor to do the same for threatened endemic marine fishes and invertebrates. If, as seems inevitable, warming seas continue to cause the loss of corals and their symbionts and the breakdown of symbiotic relationships that have evolved over millennia, we can and should rear endemic marine life in aquariums and aquaculture systems.

The state of Hawaii should be among the first to consider such a conservation project. Twenty-five percent of the reef and shore fishes of the Hawaiian Islands are endemic, the highest proportion of any island region in the world. Hawaii’s most widely exported reef fish, the Yellow Tang, Zebrasoma flavescens, though not endemic, has been successfully reared by Chad Cullen from egg to adult at the Ocean Institute at the University of Honolulu, as have a wide variety of other families of reef fishes. The Hawaii Larval Fish Project by Frank Baensch’s Reef Culture Technologies has now successfully cultured 37 species of Hawaiian fishes (http://www.rcthawaii.com).

Knowing that my colleague in Israel, Arik Diamant, had photographs of different species of fish that forage together, as well as fishes with octopuses, I suggested that we join forces and present the best photos we could find to illustrate symbiosis in fishes and other marine organisms found in the vicinity of coral reefs. This article, and our paper in the Journal of the Ocean Science Foundation, are the result. —J. E. Randall

The authors thank Christa Holdt, Michael Roberts, Larry Tackett, Gary Bell and Avi Klapfer for their exceptional photographs illustrating symbiosis in the sea. The comments by Arthur Bos, Mark Hixon, Robert Myers, and Rupert Ormond are greatly appreciated. We are indebted to Mark Hixon and Helen A. Randall for assistance with references. We are most grateful to Benjamin Victor, editor of the Journal of the Ocean Science Foundation, who declined our invitation to join as an author, for his substantial contribution to the paper.

Adapted for CORAL Magazine from:

John E. Randall, Ph.D., is Senior Ichthyologist Emeritus at the Bishop Museum and a member of the biology faculty at the University of Hawai’i at Manoa, Honolulu. Randall has described more than 600 fish species and has authored 11 books and over 670 scientific papers and popular articles.

Bellwood, D.R. 1998. What are reef fishes? — Comment on the report by D.R. Robertson: Do coral-reef fish faunas have a distinctive taxonomic structure? Coral Reefs 17: 179–86.

Coles, S.L. 1984. Colonization of Hawaiian reef corals on new and denuded substrata in the vicinity of a Hawaiian power station. Coral Reefs 3: 123–30.

Diamant, A. and M. Shpigel. 1985. Interspecific feeding associations of groupers (Teleostei: Serranidae) with octopuses and moray eels in the Gulf of Eilat (Aqaba). Environ Biol Fishes 13 (2): 153–59. 112

Karplus, I. 1978. A feeding association between the grouper (Epinephelus fasciatus) and the moray eel (Gymnothorax griseus). Copeia 1978: 164.

Johannes, R.E. 1981. Words of the Lagoon: Fishing and Marine Lore in the Palau District of Micronesia. University of California Press, Berkeley.

Myrberg, A.A. and R.E. Thresher. 1974. Interspecific aggression and its relevance to the concept of territoriality in reef fish. Am Zool 14: 81–96.

Ormond, R.F.G. 1980a. Occurrence and feeding behavior of Red Sea coral reef fishes. Proceedings of Symposium on the Coastal and Marine Environment of the Red Sea, Gulf of Aden and Tropical Western Indian Ocean, Khartoum 2: 329–71.

Randall, J.E. 1958. A review of ciguatera, a tropical fish poisoning with a tentative explanation of its cause. Bull Mar Sci Gulf Carib 8: 236–67.

———. 1961b. A contribution to the biology of the convict surgeon fish of the Hawaiian Islands, Acanthurus triostegus sandvicensis. Pacif Sci 15: 215–72.

Randall, J.E. and V.E. Brock. 1960. Observations on the ecology of epinepheline and lutjanid fishes of the Society Islands, with emphasis on food habits. Trans Am Fish Soc 89: 9–16.

Reese, E.S. 1975. A comparative field study of the social behavior and related ecology of reef fishes of the family Chaetodontidae. Zeitschr Tierpsych 37: 37–61.

———. 1981. Predation on corals by fishes of the family Chaetodontidae: implications for conservation and management of coral reef ecosystems. Bull Mar Sci 31: 594–604.

Robertson, D.R. 1970. Review of the predators and parasites of stony corals, with special reference to symbiotic prosobranch gastropods. Pacif Sci 24: 43–54.