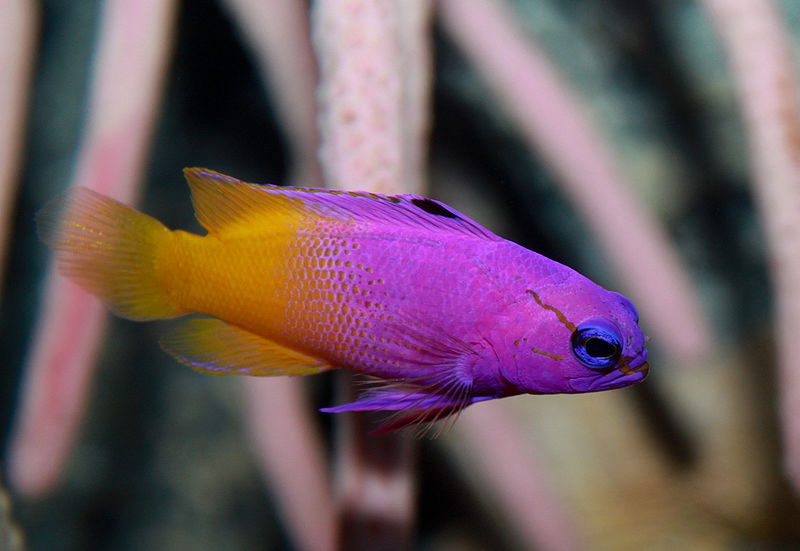 The Royal Gramma is an example target species for a new marine ornamental fish hatchery planned to launch in 2018. Image credit: Brian Gratwicke, CC BY 2.0

The hatchery, which will be located within the Puntacana Resort and Club, will test the feasibility of raising cultured Caribbean reef fish on a commercial scale for export while restoring some depleted ornamental fish populations on the Punta Cana coral reefs.

Some of the species targeted for culture include the Royal Gramma (Gramma loreto), various gobies such as the Yellowline Goby (Elacatinus figaro), and peppermint shrimps (Lysmata wurdemanni), a new species named in honor of Dr. Junda Lin in recognition of his work on the aquaculture and sexual biology of Lysmata.

The hope is to increase the availability of aquacultured animals in the aquarium trade – without removing resources from their natural environments – and to draw more tourists to visit the reefs, potentially spurring economic growth in the area.

Business Model for the Caribbean

Other goals of the two-year pilot project include integrating local fishermen and their families in new sustainable livelihoods through the hatchery and creating a viable business model that could be replicated in other regions of the Dominican Republic and the Caribbean.

“We’re very thankful and happy for this partnership with Roger Williams,” said Frank Elias Rainieri ’99, a trustee at RWU, a vice president of Grupo Puntacana and son of Frank Rainieri, who founded the resort. “As an alumnus, it’s a dream come true.”

“We are thrilled to expand our reef restoration efforts to include ornamental fish species in collaboration with Roger Williams University,” said Jake Kheel, vice president of the Grupo Puntacana Foundation. “The health of our coral reef is fundamental to the success of our resort now and in the future. We think this project is a natural progression in our expanding efforts to provide viable solutions to the challenges facing the marine coastal area of Punta Cana.”

For Roger Williams, the project provides an opportunity to apply technology and knowledge developed by the university’s Center for Economic and Environmental Development (CEED) to the social and environmental challenges presented by the rise of tourism and related development in the Punta Cana region. By implementing its research methods of culturing aquatic animals for commercial scale, the CEED will be able to expand the development and capabilities of its marine ornamental fish hatchery, opening that experience and learning to students.

“We’ll be able to give students an experience at Roger Williams where they can go from just learning about the species to commercially producing them,” RWU Assistant Professor of Marine Biology Andrew Rhyne said. “That’s a very rare thing to be able to do. At the same time, we’ll be able to expand species that are in the aquarium trade. This will maybe inject new species into the trade, as well, since many of the species that will be raised are not cultured at commercial levels.”

RWU faculty and students at CEED will serve as consultants for the pilot project and assemble the hatchery grow-out systems that will then be shipped to the Dominican Republic for installation. Potential exists for on-site summer internships at the hatchery.

Rhyne, who oversees the ornamental fish hatchery at RWU, helped initiate the partnership with Rainieri after a site visit to the resort’s marine lab.

Ground-breaking for the hatchery is underway. The state-of-the-art facility is scheduled to be operational in early 2018. The hatchery will follow industry best practices and will not introduce exotic or invasive species to the region.

The foundation plans to hire a hatchery manager, who will be based at RWU before transitioning to Punta Cana. Funding for the hatchery pilot program will come from Grupo Puntacana, as well as a grant awarded to the Foundation by the Inter-American Development Bank for coral reef restoration. The bank is the largest source of development financing for Latin America and the Caribbean. 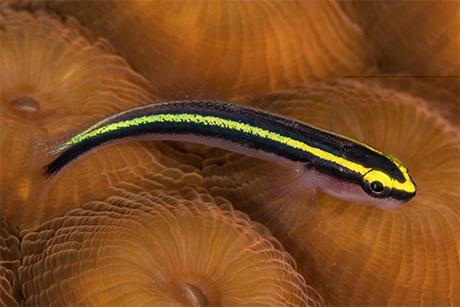 The Sharknose Goby is one the many species that will be raised during the ornamental fish hatchery pilot project. Image credit: Roger Williams University

About RWU: With campuses on the coast of Bristol and in the heart of Providence, R.I., Roger Williams University is a forward-thinking private university committed to strengthening society through engaged teaching and learning. At RWU, small classes, direct access to faculty and guaranteed opportunity for real-world projects ensure that its nearly 4,000 undergraduates – along with hundreds of law students, graduate students and adult learners – graduate the critical thinking and practical skills that today’s employers demand. Roger Williams is leading the way in American higher education, confronting the most pressing issues facing students and families – increasing costs, rising debt and job readiness.

About Grupo Puntacana: The development of Grupo Puntacana dates to 1969, when Dominican businessman and hotelier Frank R. Rainieri and Theodore W. Kheel, the prominent New York attorney and labor mediator, created a partnership to construct a resort and real estate community that respects the natural habitat of Punta Cana while offering a world-class vacation experience. Maintaining a dedication to sustainable tourism, Puntacana Resort & Club has since grown to encompass over 26 square miles and now includes Tortuga Bay, Six Senses Spa, the Grupo Puntacana Fundation, five residential communities (Corales, Serena, Hacienda, Marina and Arrecife), a full-service marina, nine restaurants, a shopping village, two 18-hole golf courses, and Punta Cana International Airport, a modern facility that incorporates innovative and eco-friendly design. In 1997, Julio Iglesias and Oscar de la Renta joined the Group as co-investors and have made Puntacana Resort & Club their home. Currently, Punta Cana is the most highly-visited Caribbean destination and is easily accessible from all over the globe.

About Grupo Puntacana Foundation: Formed in 1994, the Grupo Puntacana Foundation has developed a diverse array of experimental projects that confront different environmental and social challenges in the Dominican Republic. Grupo Puntacana realized that if its own businesses and the hundreds of tourism-related businesses in the region are to be successful in the future, they must protect the local environment and invest in the local community. Rather than a charity that makes donations to different causes, the Foundation was created to implement living, breathing solutions to environmental and social problems that can be replicated in other destinations in the country. The Foundation uses the Grupo Puntacana resort and the Punta Cana tourism destination as a laboratory to implement projects, and then shares those experiences with other businesses, universities, and governments, all with the aim of making the tourism industry more sustainable in the long term. It has grown from a Foundation supported primarily by Grupo Puntacana into an active collaborator that attracts funding from national and international foundations, multilateral organizations, companies, and revenue-generating projects and partnerships.