Rising Tide Conservation and the University of Florida Indian River Research and Education Center have announced the first successful aquaculture of the Cuban Hogfish, Bodianus pulchellus.

Rising Tide Conservation, with the University of Florida Indian River Research and Education Center, is pleased to announce the successful aquaculture of the Cuban hogfish, Bodianus pulchellus! 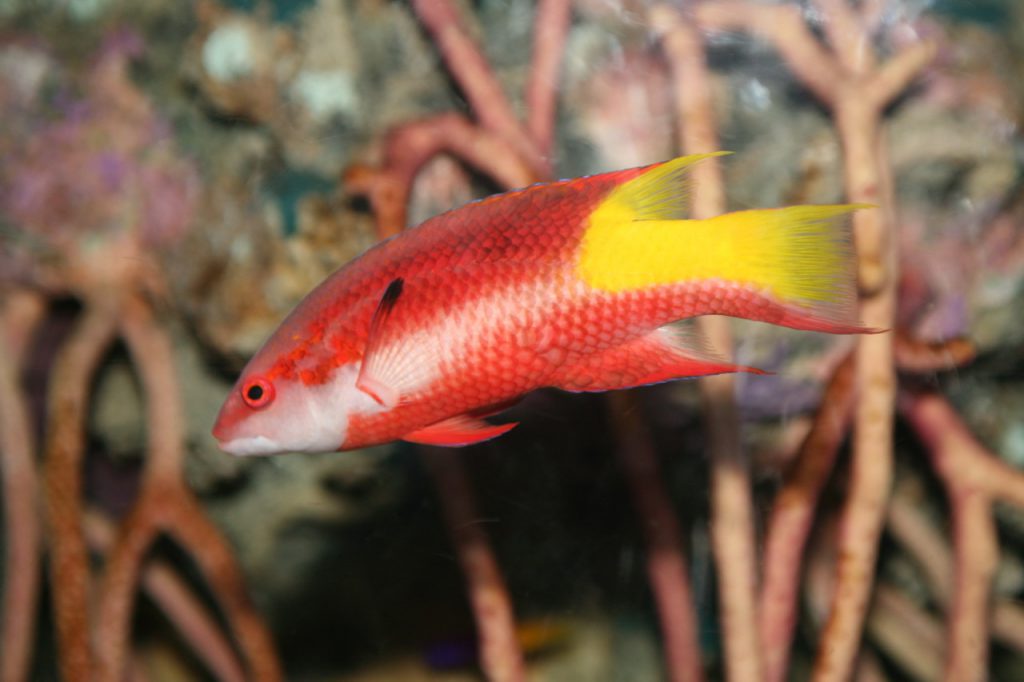 An example of an adult Cuban or Spotfin Hogfish, Bodianus pulchellus. Image by Flickr user Cliff; CC BY 2.0

The Cuban Hogfish, also known as the Spotfin Hogfish, is a species of wrasse native to the Western Atlantic Ocean, ranging from the Carolinas and Bermuda to Honduras, Brazil, and Western Africa (Gulf of Guinea). Coloration changes as the fish matures, but is a striking combination of red, white, and yellow. General adult size is 18 centimeters, but can reach up to 29 centimeters. This species typically inhabits rocky and coral reefs at depths of 15 to 24 meters, but they have been found at depths up to 120 meters. They do not swim at a specific depth level, making them difficult to reliably catch for the aquarium trade.

The Cuban Hogfish forms harems in the wild, with the territory of one dominant male containing several females. Like other members of the wrasse family, they are protogynous and change sex from female to male. It has been reported that most males harvested from the wild are secondary males (originally female).

The Cuban Hogfish has never been successfully aquacultured before. Past attempts have achieved successful spawning but not settlement.

In January of 2016, the University of Florida Indian River Research and Education Center received 24 adult Cuban Hogfish as broodstock from a local aquarium. The broodstock were stocked in a 2700-liter circular tank within a recirculating aquaculture system, and were given large PVC pipes for hiding. The broodfish adapted well to their tank and daily diet of squid and krill, and were fed multiple times throughout the day.

The sex ratio within the broodstock tank is unknown; however, it is believed that the largest male became the dominant male. The largest male has slightly altered coloration and lacks the lateral white stripe seen on most Cuban Hogfish. It is believed that there are some non-dominant males also in the broodstock tank, but their role during mating is unknown.

On October 2, 2016, about 300 non-fertile eggs (0.73 millimeters in diameter) were collected with the water temperature around 28°C. All eggs float to the surface immediately after spawning, regardless of fertilization status. Since October, the broodstock have spawned almost daily. They rarely go more than three days without spawning. Initially, the broodstock spawned in the late afternoon, but later started spawning in the evening. On average, each spawn results in 9,250 eggs with 3.7% fertilization and is ongoing to present day. 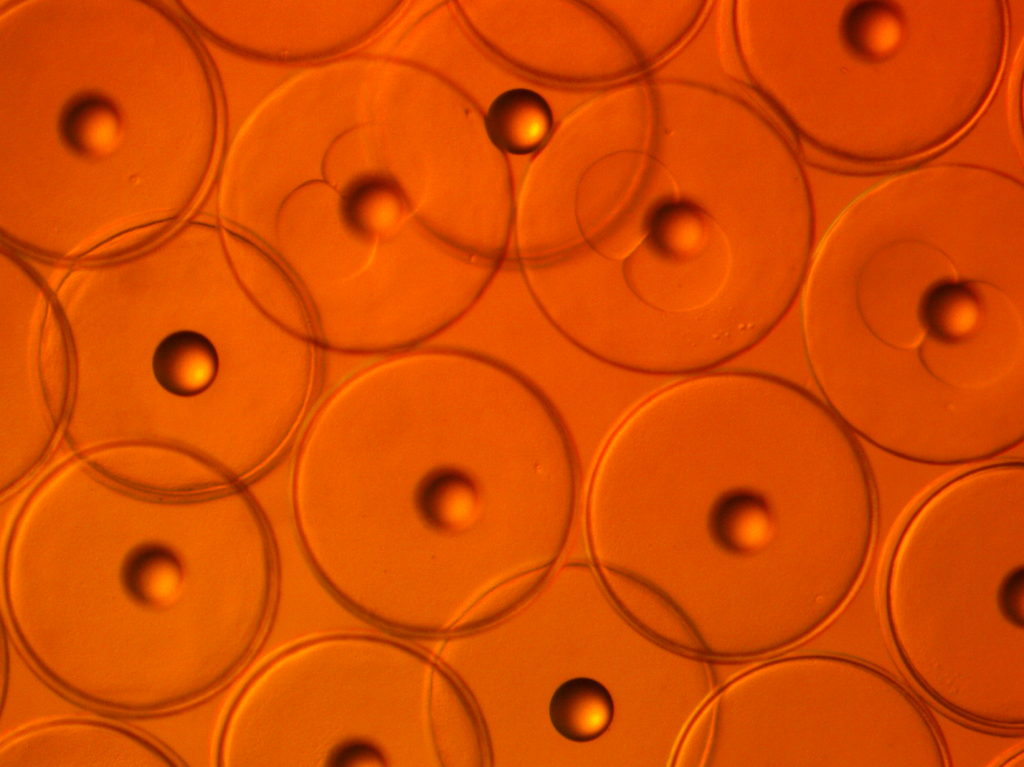 On November 1, 2016, a small amount of fertile eggs (approximately 200 of 1,000 eggs total) were collected, allowing the first attempt to raise Cuban Hogfish larvae. This attempt would turn out to be successful, resulting in two juveniles. The second attempt combined two batches of eggs (24,000 total) spawned on February 5 and 6, 2017, and resulted in the successful development of 26 juveniles. 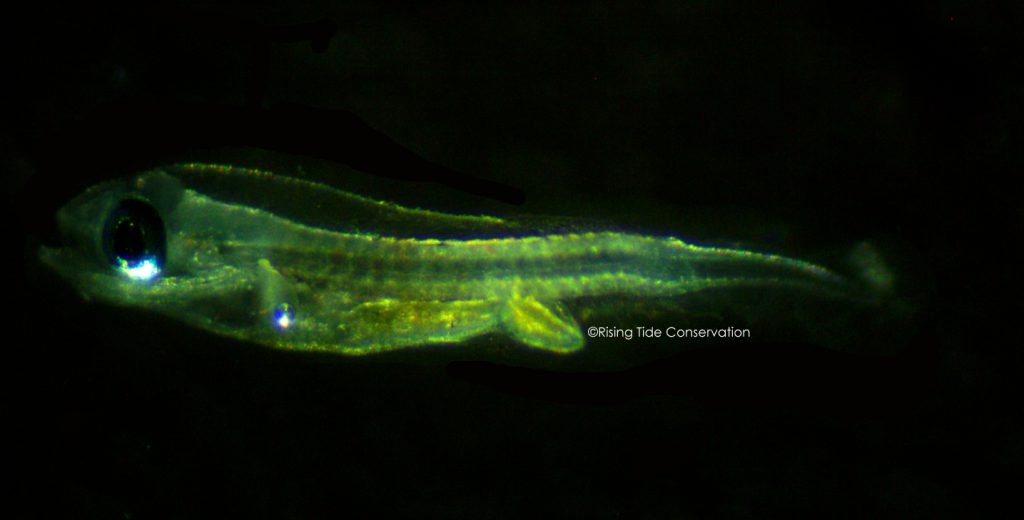 The protocols for raising the two batches of larvae were similar. The eggs were stocked into 104-liter circular tanks with black sides and white bottoms. Tanks were within a recirculating aquaculture system equipped with an 80-watt UV sterilizer, two bag filters with 50 and 10 μm felt bags, a protein skimmer and trickle filter. Water flow within the tanks was maintained at a minimum of five tank turnovers per day.

Hatching occurred within 24 hours with water temperatures of 26-27°C. Mouthparts were present by three days post-hatch (DPH). Tank water was greened from 3-30 DPH with live T- ISO twice daily at an approximate density of 100,000 cells/milliliters.

Rotifers (Brachionus plicatilis) and copepod nauplii (Parvocalanus crassirostris) were both fed at first feeding. Rotifers were enriched with S.presso and fed once daily at 10-20/milliliters from 3-24 DPH. Copepod nauplii less than 75 µm were fed twice daily at total densities of 10-15/milliliters from 3-36 DPH. Artemia nauplii (Instar I and II) were enriched with Algamac 3050 and fed twice daily beginning at 15 DPH through 60 DPH at total densities as high as 1.0/milliliters.

Cuban Hogfish, B. pulchellus at 74 DPH; approximately 21.2 mm. Juveniles begin to resemble the pink and yellow bi-color patterns of adults. 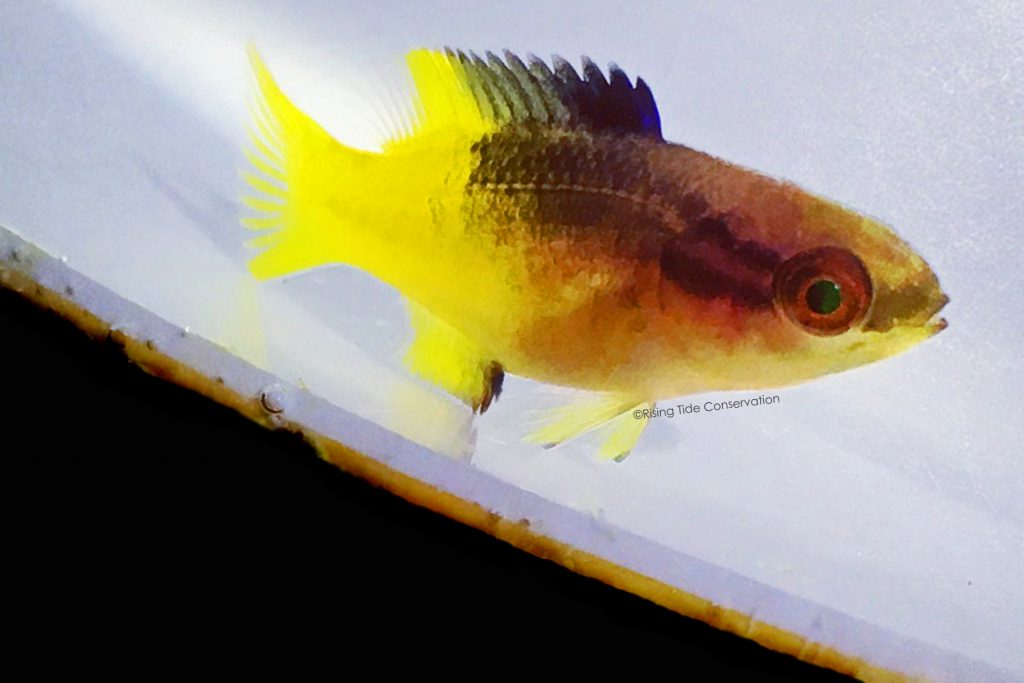 Cuban Hogfish, B. pulchellus, at 77 DPH from the first batch. Juveniles begin to develop adult coloration, but in purple at first rather than red.

Remarks from the Researchers

We feel that raising the larvae is highly feasible, and efforts to improve fertilization success of the eggs will hopefully result in much higher output of juveniles.