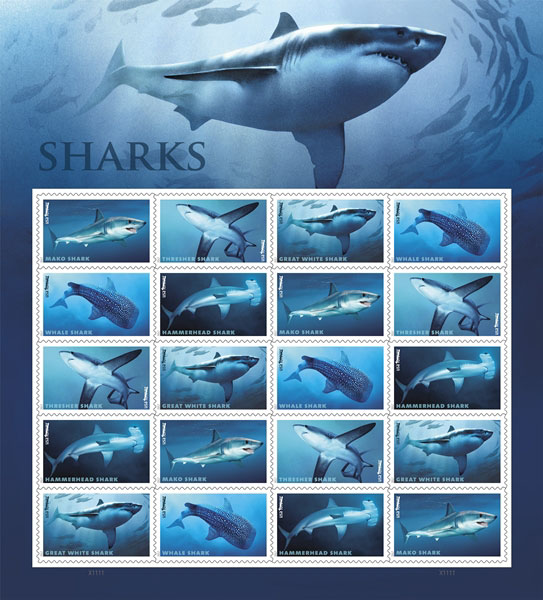 July 25th, 2017, NEWPORT, KY:  Don’t worry — these sharks won’t bite. They’re smaller than a clam and flatter than a flounder. The U.S. Postal Service will celebrate the wonder of sharks tomorrow by issuing the Sharks Forever stamps featuring five species that inhabit American waters — the mako, thresher, great white, hammerhead, and whale sharks. When sharing, use the hashtag #SharksStamps.

Available at Post Offices nationwide tomorrow, the First-Day-of-Issue ceremony will take place at 8 a.m. ET at the Newport Aquarium in Newport, KY. You may purchase the stamps using this link now for delivery shortly after the stamps are issued.

Artist Sam Weber of Brooklyn, NY, based his five illustrations on images captured by undersea photographers. Using those references and the guidance of shark experts, he created clear, realistic depictions of sharks in action. Sketching first with a pencil, Weber then used his computer to add detail, dimension, and color. Art director Derry Noyes of Washington, DC, designed the pane.

“While sharks may be scary to some, the prospect of a world without sharks is truly frightening,” said U.S. Postal Service Chief Human Resources Officer and Executive Vice President Jeffrey Williamson. “As apex predators, sharks keep other marine life in balance, and by doing so, they play a critical role in regulating our largest ecosystem — the oceans.  As one of the nation’s oldest public service institutions, the Postal Service takes pride in using its stamps to raise awareness of important issues (such as the worldwide decline in shark populations). We hope the stamps unveiled today help highlight the need for shark conservation and a greater respect and admiration for these incredible animals.”

“This Postal Service initiative is a great thrill for conservation-minded shark lovers everywhere,” said Whitney. “It should inspire everyone to support science-based management of these animals so that we can have sharks forever in our oceans, as well as on our envelopes.”

Misunderstood Creatures
Possibly no other creatures are as mythologized — and as misunderstood — as sharks. Blockbuster thrillers and sensationalized media have fueled the mistaken belief that sharks are monsters: unthinking, bloodthirsty, vengeful, and primitive. While they are ancient creatures that emerged twice as long ago as the first dinosaurs, after 400 million years of evolutionary refinements, sharks are extraordinarily advanced organisms. The 500 or so known shark species are ideally adapted for their ecological role.

The adaptations of sharks include light, flexible skeletons of cartilage, teeth replaced without limit, and skin covered by a hydrodynamic surface of tiny tooth-like structures. Their enviably keen senses include one that detects electrical signals given off by prey and enables navigation by Earth’s magnetic field. Their nervous systems are adapted to sense minuscule water movements — from a struggling, far-off fish, for instance.

Primal fears aside, people threaten sharks more than they do us. Sharks are overfished — often before reaching reproductive maturity. Cutting off fins for a soup delicacy also collapses populations. But there is hope. Shark ecotourism allows us to witness their grace. Increased study expands our knowledge of these fantastic creatures. 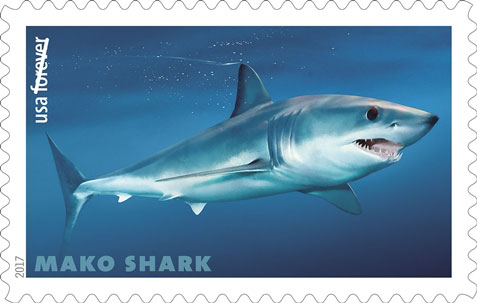 The first row of stamps features the swift, streamlined Shortfin Mako Shark (Isurus oxyrinchus) knifing through the water near the surface. Its great speed and soaring leaps epitomize shark athleticism. 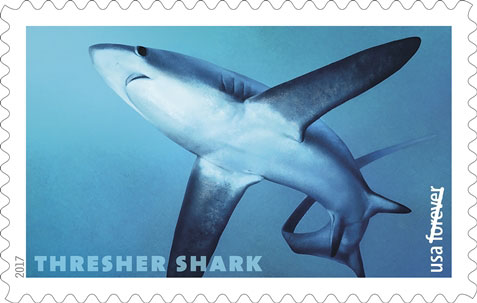 The second stamp in the first row shows a pelagic Thresher (Alopias pelagicus). The most distinctive feature of this shark is its unique, whip-like tail that rounds up and stuns prey. 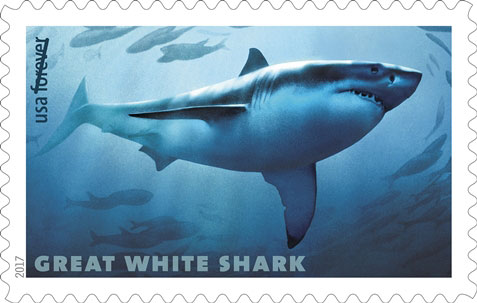 Weber began his illustration assignment with the Great White Shark (Carcharodon carcharias), the third stamp in the first row. Its notorious jaws are packed with sharp, serrated teeth. This species epitomizes sharks in many people’s minds. This artwork inspired the style and palate that Weber used to portray the other sharks. Weber credits legendary underwater photographer Norbert Wu with providing an image used as reference for this stamp. 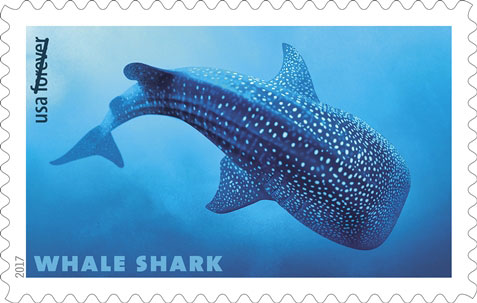 The fourth stamp in the first row depicts the world’s largest fish, the sluggish, filter-feeding, school bus-sized Whale Shark (Rhincodon typus). Docile and colossal, it skims for plankton, fish, and squid. This design is repeated as the first stamp in the second row. 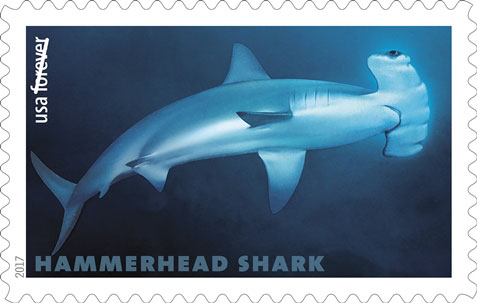 The second stamp in the second row features the hammerhead shark. The broad head of hammerhead sharks represented by this scalloped hammerhead (Sphyrna lewini) has sensors that detect sand-buried stingrays. The artwork depicts it as one type among the three large hammerhead species.

The image of the great white shark looms large on the wide margin of selvage at top, with the issuance title, “SHARKS,” superimposed flush left with five rows of four stamps each. The shade of blue on the selvage deepens as one looks down the pane, an effect suggesting sunlight barely penetrating the inky ocean depths.

Ordering First-Day-of-Issue Postmarks
Customers have 60 days to obtain first-day-of-issue postmarks by mail. They may purchase new stamps at Post Office locations, at the Postal Store usps.com/shop, or by calling (800) 782-6724. They should affix the stamps to envelopes of their choice, address the envelopes to themselves or others, and place them in larger envelopes addressed to:

After applying the first-day-of-issue postmark, the Postal Service will return the envelopes through the mail. There is no charge for postmarks up to a quantity of 50. For more than 50, customers are charged 5 cents each. All orders must be postmarked by Sept. 26, 2017.

Ordering First-Day Covers
The Postal Service also offers first-day covers for new stamps and stationery items postmarked with the official first-day-of-issue cancellation. Each item has an individual catalog number and is offered in the quarterly USA Philatelic catalog, online at usps.com/shop or by calling (800) 782-6724. Customers may request a free catalog by calling (800) 782-6724 or writing to:

Philatelic Products
There are nine philatelic products for this stamp issue:

Many of this year’s other stamps may be viewed on Facebook at facebook.com/USPSStamps or via Twitter @USPSstamps.

The Postal Service receives no tax dollars for operating expenses and relies on the sale of postage, products, and services to fund its operations.