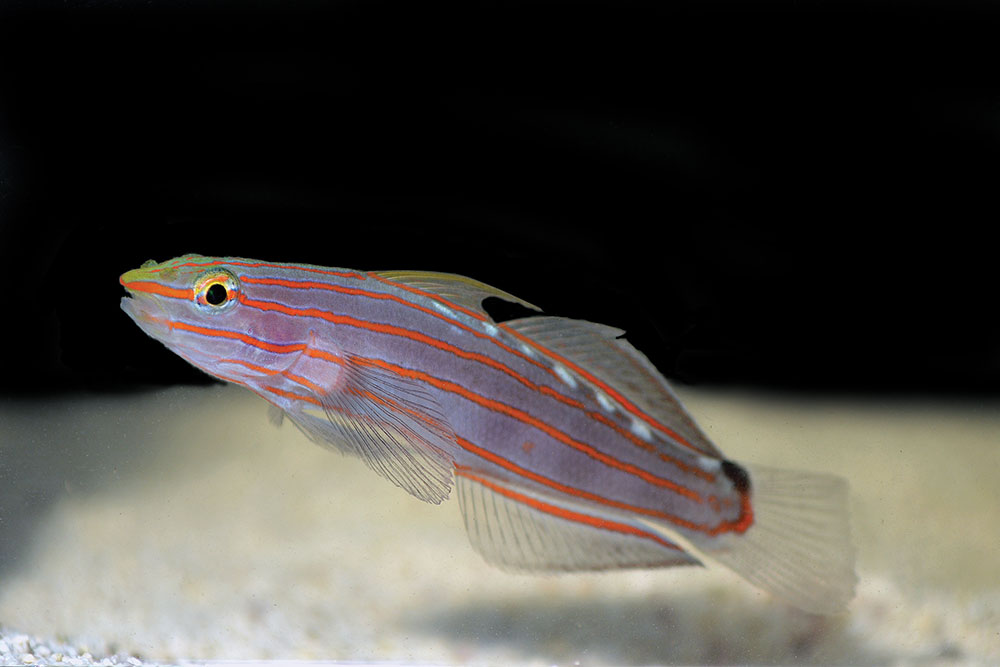 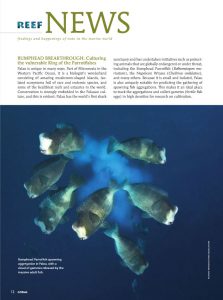 Biota first graced the pages of CORAL Magazine in the May/June 2014 issue, with stunning news of the first successful captive hatching and rearing of a Parrotfish.

Biota Marine Life Nursery first made headlines with a story that left many experienced aquaculturists incredulous: the unheard-of production of tank-raised Bumphead Parrotfish (Bolbompetopon muricatum), an iconic, endangered species growing to more than 4 feet in length (130 cm) and topping the scales at over 100 pounds (46 kg). (See CORAL, May/June 2014.) This breakthrough success in Palau at the hands of Biota founder and principal Tom Bowling, an aquaculture “first” not just for the species but for the entire Scaridae family, catapulted Biota’s aquaculture endeavors into the public eye.

Biota followed up with another remarkable feat—bringing tank-raised Clown Triggerfish (Balistoides conspicillum) into the US market (CORAL May/June 2015). More recently, Bowling and his partner, Kevin Gaines, launched Biota Aquariums (CORAL Jan/Feb 2017), a separate but related business based in Florida. Biota Marine Life Nursery is now introducing an ambitious range of captive-raised and maricultured livestock that will be directly available to aquarium retailers across the United States. (Bowling is eager to point out that Biota’s successes and production would not be possible without the talent of his team, including Irie Sean Salvador, Junior Takada, Billy Watson, Omecheliu Polloi, and Brad Nareto, Toi Sledzinski, and Bowling’s wife, Tatiana Bowling, who makes order out of the chaos.)

With the financial backing of an undisclosed financier who shares Biota’s long-term vision for the marine aquarium trade, Biota has grown quickly in the past few years. In the past, Biota’s production did not enter the aquarium trade under the Biota brand name, meaning that you may well have purchased a Biota fish without even knowing it. Opting to go for a more direct distribution model, Biota is now poised to become the next household name in the growing field of large-scale ornamental marine aquaculture companies.

For some, Biota seems to have exploded on the scene, coming out of nowhere, offering a dizzying array of aquacultured products. In reality, Biota’s market presence has been a long time in the works. A careful scan of Biota’s Facebook page reveals that some projects have been in the works for years, and we’re only now starting to see the benefits of this prior investment.

Bowling’s aquaculture background is rather extensive, having bred fish since childhood. His journey took a serious step forward with a double major in Marine Biology and Aquaculture from James Cook University. During 2002-2004, some of this seahorse production was exported to the US and sold through Florida-based Oceans, Reefs & Aquariums (ORA). Later, he spent three years running ORA’s Marshall Islands Mariculture Farm, on the island of Majuro. He later departed to build a small public aquarium at the National Marine Science Center in Coffs Harbour, New South Wales, Australia.

It wasn’t until Bowling traveled to Palau for a honeymoon that he discovered what is now Biota Marine Life Nursery. At the time, the facility was a non-operational rabbitfish mariculture operation. Securing a lease, Bowling converted the facility to focus on ornamental aquaculture. 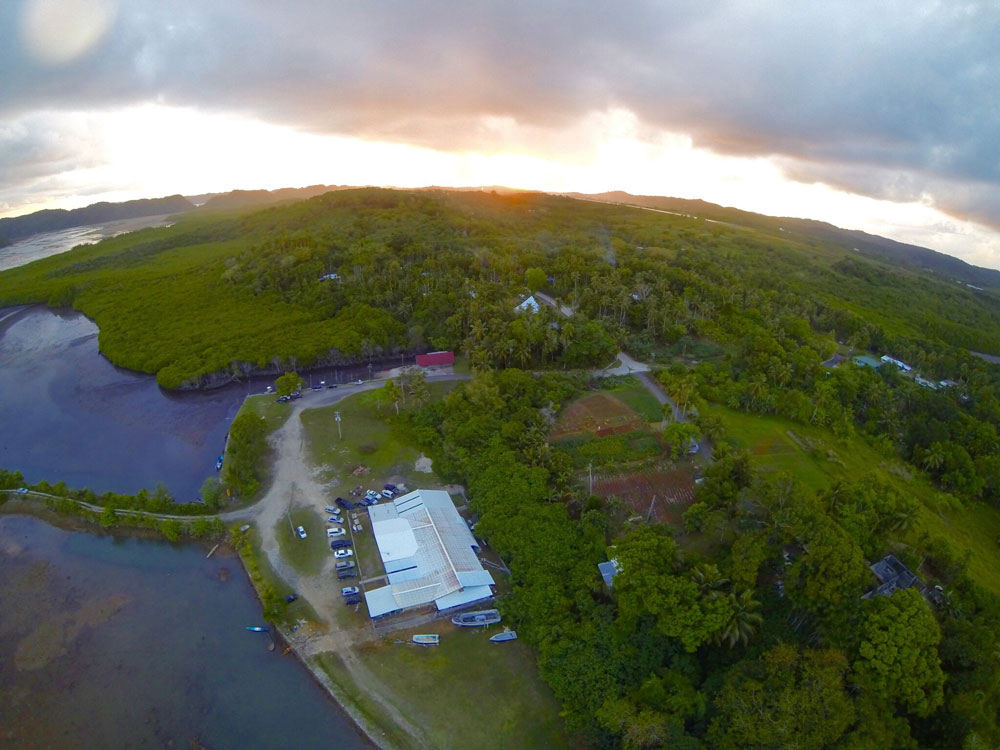 The list of species offerings that Biota has settled on is notably devoid of the quintessential clownfish that still seems to dominate most commercial ornamental marine aquaculture. While the company does produce a few tank-raised species, normally reared from wild-collected spawns (such as the Clown Triggerfish and the Blue Lined Sea Bream, Symphorichthys spilurus), most of their small ornamental marine fishes are captive-bred, spawned, and reared in closed systems that receive weekly water changes with filtered natural sea water. Biota is currently focusing on having more broodstock in-house, because it adds consistency to the breeding process and results in larger inventories of fishes to sell. 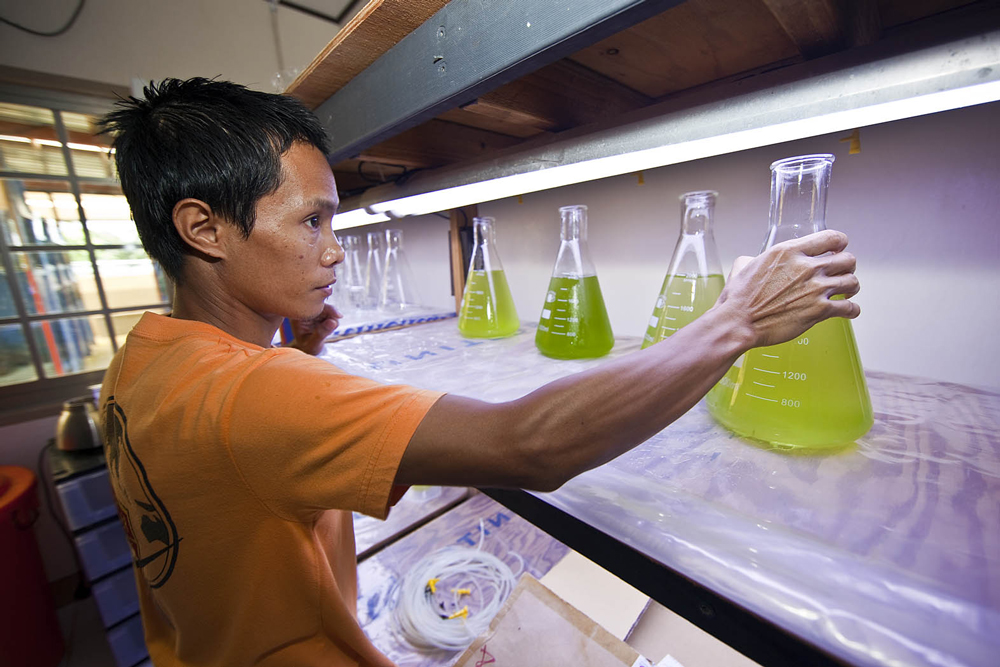 Biota’s fish culture relies on in-house phytoplankton and zooplankton production. Biota’s protocols for aquaculture are very flexible, the aim being to identify and utilize the most efficient and successful methodology to bring a particular species to market, instead of focusing on any particular strict orthodoxy. Bowling elaborated on the approximately 500,000 liters worth of culture systems on the farm. 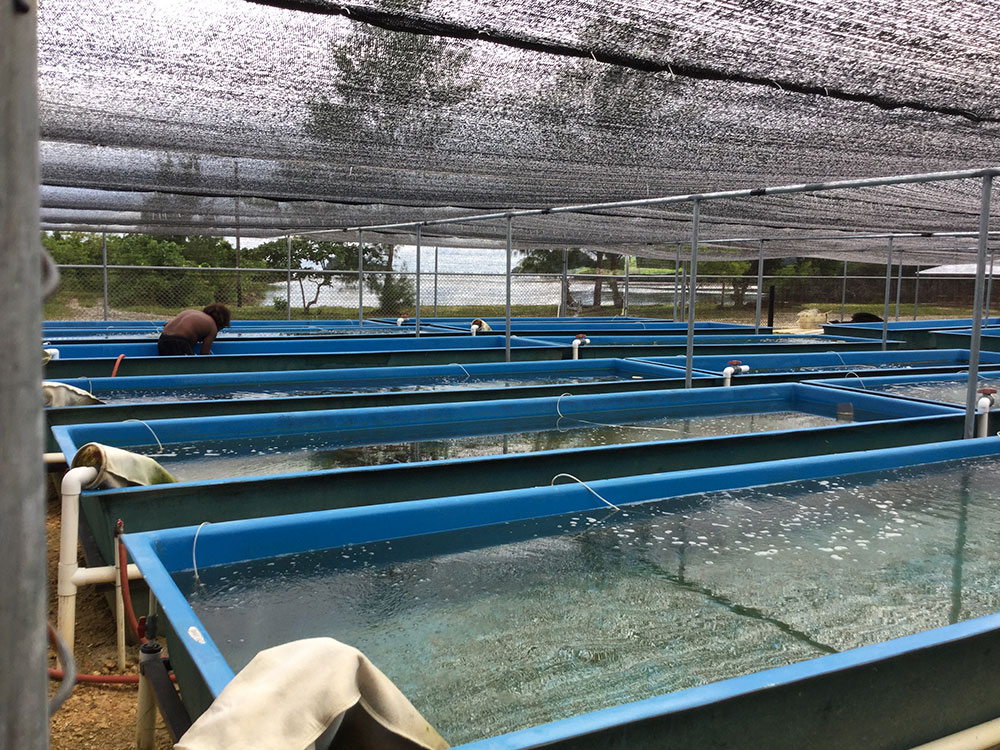 With shade cloth overhead, these flow-through raceways at Biota are available for a wide range of culture applications. Image courtesy Biota.

“Our systems are flow-through for grow-out and broodstock,” said Bowling. “This is done mainly to keep water quality at its best. Larval tanks are closed until 6-8 weeks of age, and then we establish a partial flow-through for buffering chemistry.” 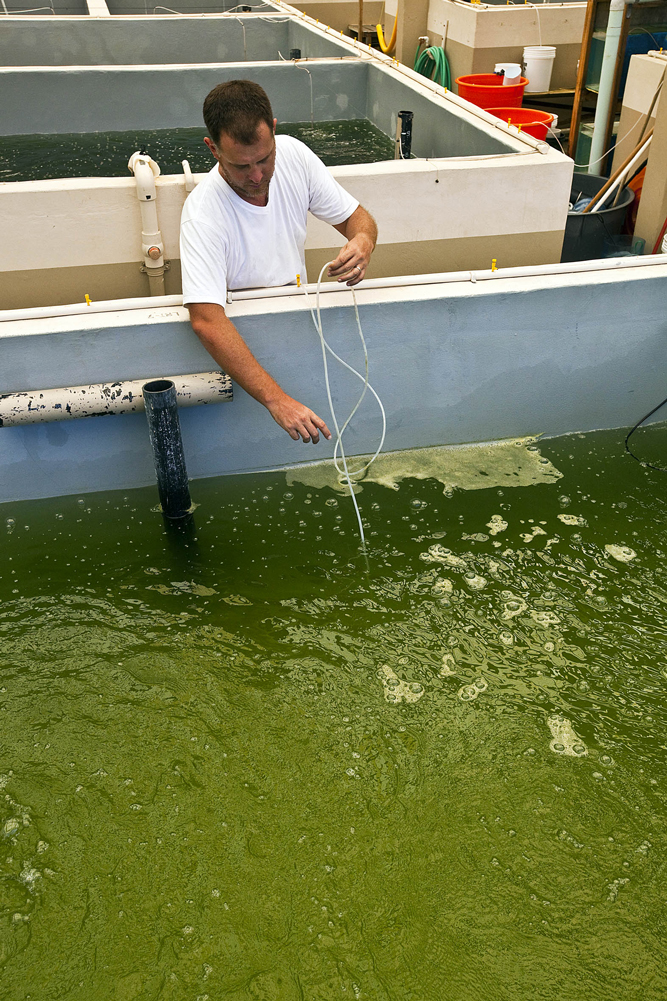 “Clams, corals, and fish all grow better in the ocean; however, there are several challenges to keeping them in cages. Therefore, only some fish species were grown in cages [in the past]. However, now we focus more on using the outdoor raceways for fish and clams. When the clams get over 1 inch in length, we move them to sea cages for faster growth.”

In addition, they are exporting aquacultured soft corals, mushroom corals, zooanthids, and captive-bred Tridacnid clams, all reared in open (flow-through) systems. Conservation measures in Palau prevent the exportation of Scleractinian (stony) corals, both SPS and LPS variants; wild fishes, likewise prohibited, are also absent from Biota’s offerings. The company is engaged in Palauan reef conservation and restoration efforts through reported finfish restocking; for every ornamental fish reared and exported, Biota stocks a cultured food fish in an attempt to bolster Palauan fishing and aquaculture economies. 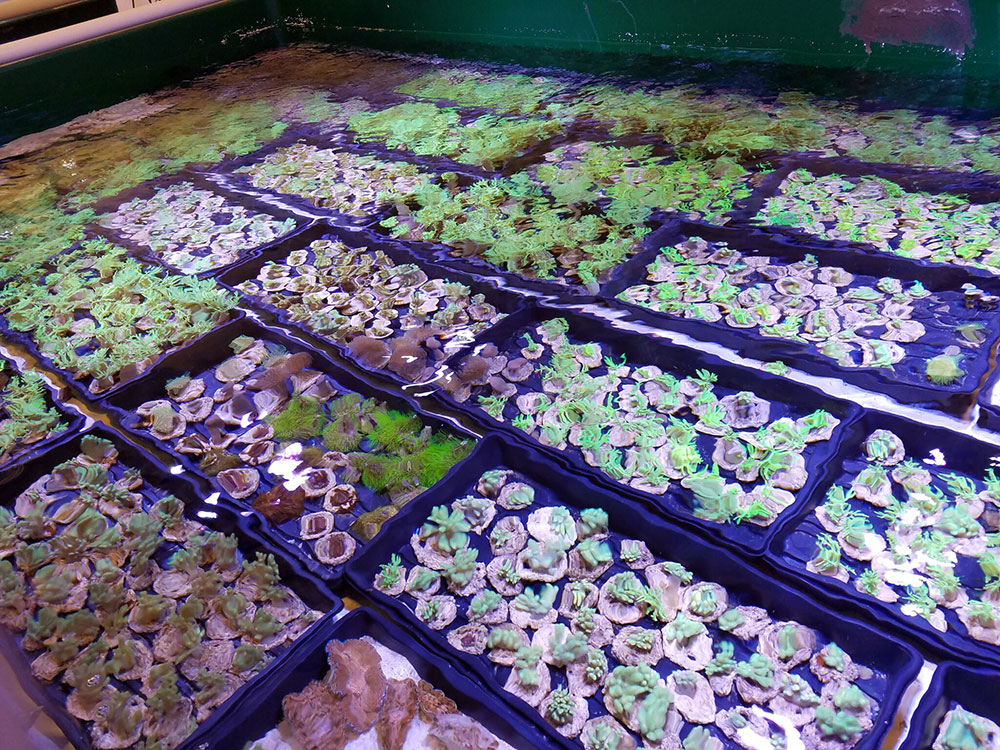 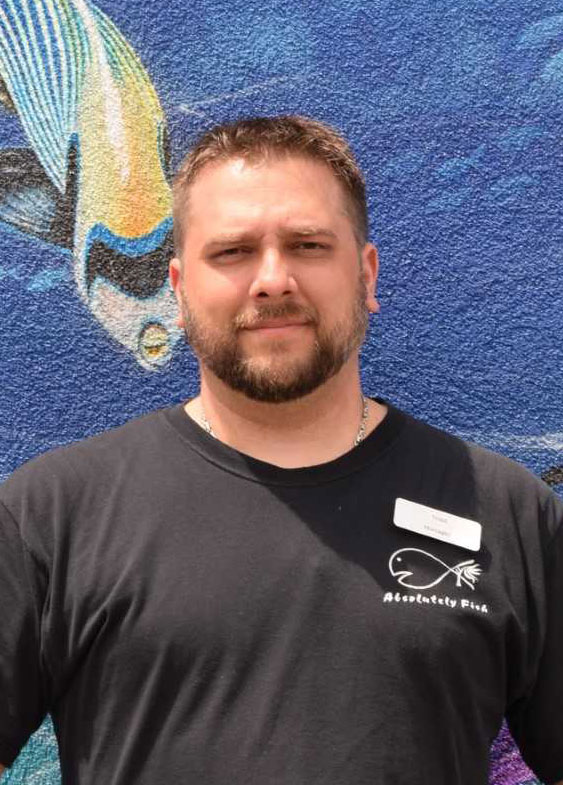 “I like what Biota is doing,” he says. “I was so impressed with the livestock Biota Aquariums sent us that we gave them dedicated space in our [captive-bred] area.” Fefferman notes that his store maintains roughly 300 gallons (1,136 L) in two dedicated retail systems, in which he keeps exclusively captive-bred fishes from select producers. “The fishes from Biota have done nothing but survive and prosper,” he continues. “Things that are considered to be on the more delicate side—for example, Rainford’s Gobies—seem to be pretty bulletproof from Biota.” Fefferman is clearly enamored with these gobies. “They don’t look like the ones that we get wild-caught. Sometimes the wild-caught ones just aren’t as vibrant. These feed better, and they’re much healthier.” 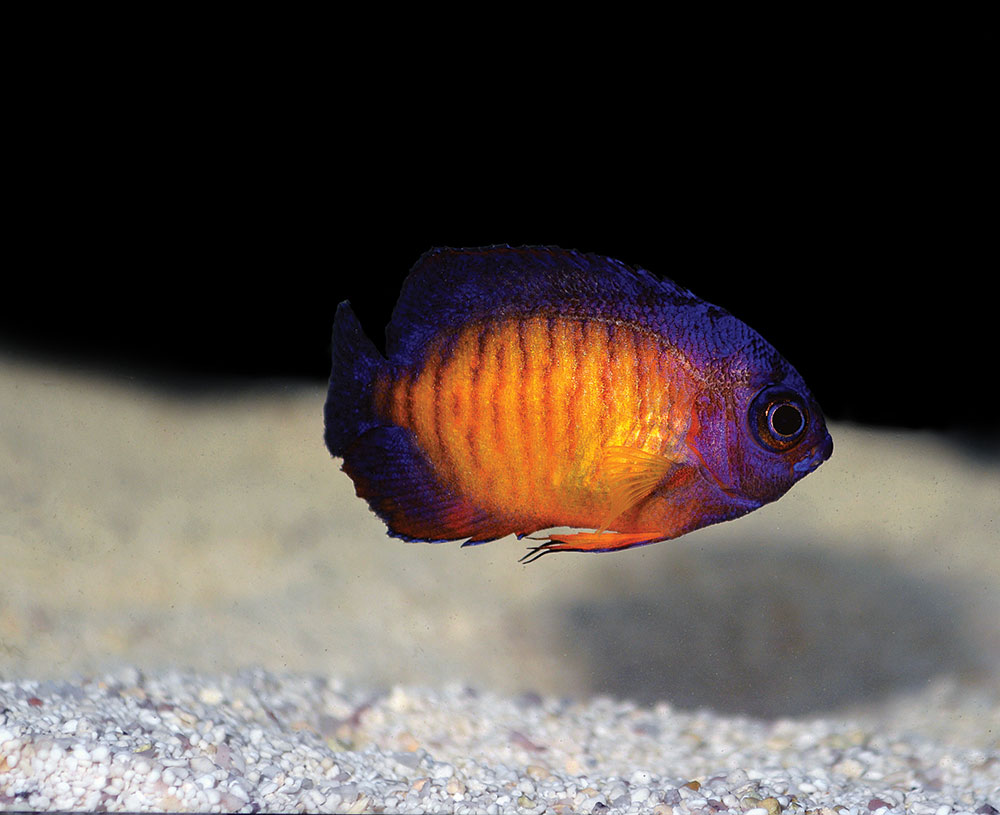 When asked about the Coral Beauties being produced by Biota in Palau, Fefferman called them “cute as can be, and very resilient,” but he admits that Old Orchard still sells many more wild-collected dwarf angelfish specimens than captive-bred Coral Beauties (the ratio is roughly 15:1). Interestingly, the retail price of one of Biota’s captive-bred angelfishes may be as much as four times higher than that of a wild-caught counterpart, and mandarins may fetch a similar premium (they are retailing at Old Orchard for approximately $125 apiece right now). But Fefferman is optimistic, saying, “At some point the pricing is going to equalize between [captive-bred] and wild-caught, and when that happens [aquaculture] will be a great resource for the hobby in general.”

Biota’s Green Mandarin Dragonet production seems to be making better initial inroads in the aquarium trade than past attempts to market captive-bred dragonets, despite a higher price point. Fefferman is undaunted by the cost, and his client base seems receptive. 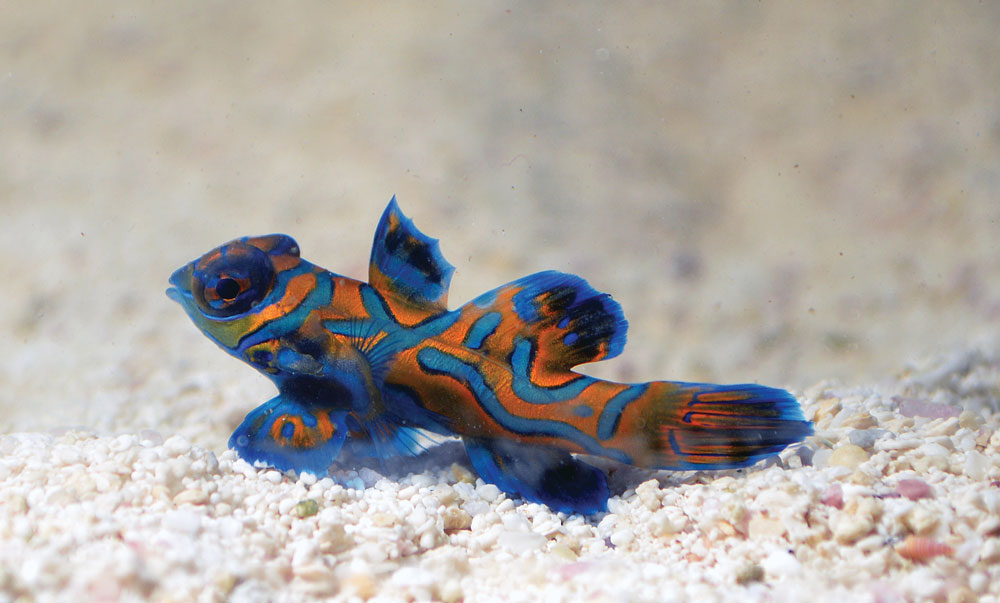 “For many years, I stopped selling mandarins because of the high mortality rate,” noted Fefferman. “We were very careful about where we placed our mandarins and would not sell them until they were eating. If a fish wasn’t eating, it wasn’t getting sold, period. So for a few years, we just said, ‘That’s it, we’re not going to sell mandarins anymore.’” 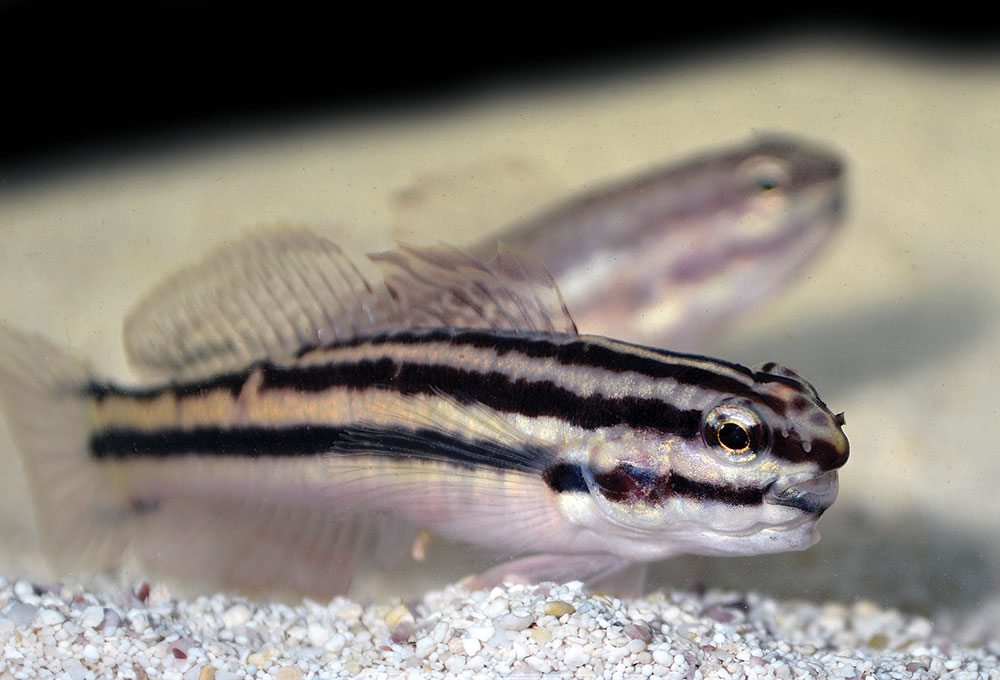 Link’s Goby is an interesting species currently being cultured in Palau.

Biota’s list of offerings continues to evolve, but, as noted earlier, the company focuses squarely outside the realm of clownfishes. Link’s Goby (Amblygobius linki) is quite possibly the only captive-raised sand-sifting goby on the commercial market; never mind that it’s an attractive species that is reasonably priced for a captive-bred fish and isn’t really available as a wild-caught fish anyway. The Bluegill Longfin (Plesiops corallicola) is an oddball offering that deserves some attention and has the potential to be a real showstopper as an adult. 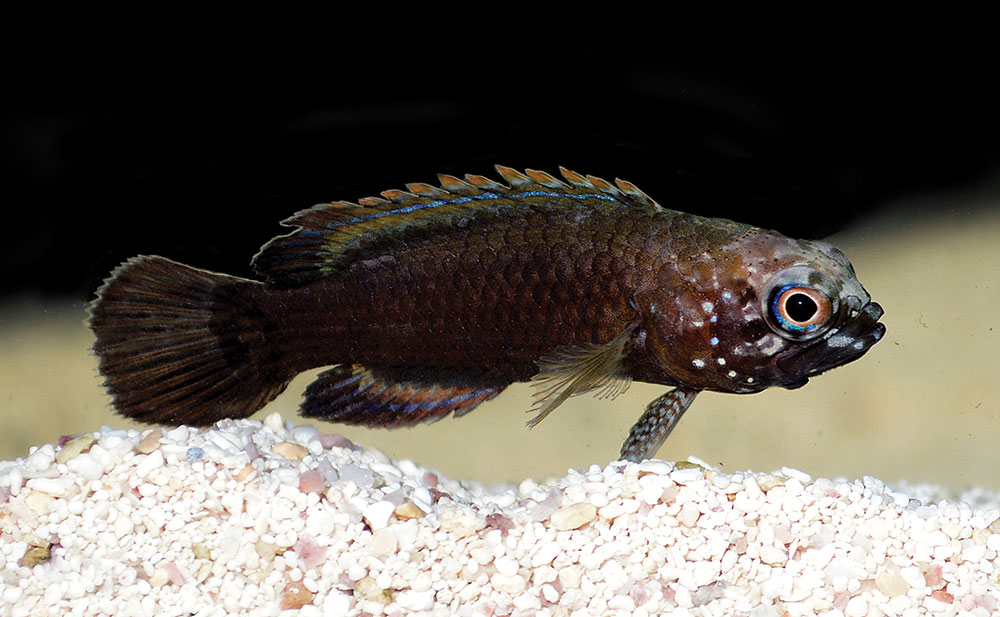 Cousin of the Marine Betta, this is a juvenile Bluegill Longfin, Plesiops corallicola—a true rarity in the trade.

Staple items like the Pajama Cardinalfish (Sphaeramia nematoptera), the Bristletail or Aiptasia-eating Filefish (Acreichthys tomentosus), the Watchman Goby (Cryptocentrus cf. cinctus), the Striped Blenny (Meiacanthus grammistes), and the Forktail Blenny (M. atrodorsalis), are also some of the diverse captive-bred fish offerings from Biota. 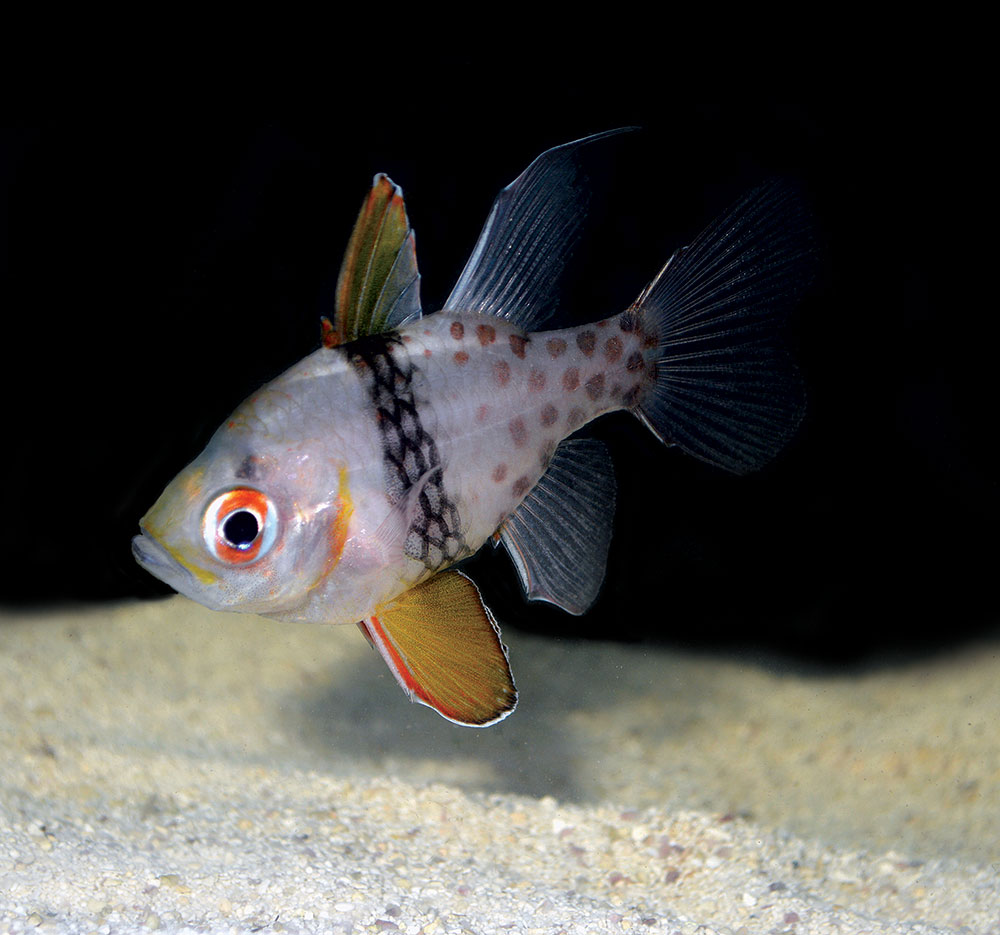 An unannounced surprise that Biota has in its Palau nurseries is the Teardrop Clam, Tridacna noae, currently 6 months post-spawn and likely first available by the end of 2017. Bowling also hinted that 2 new goby species may be announced soon. 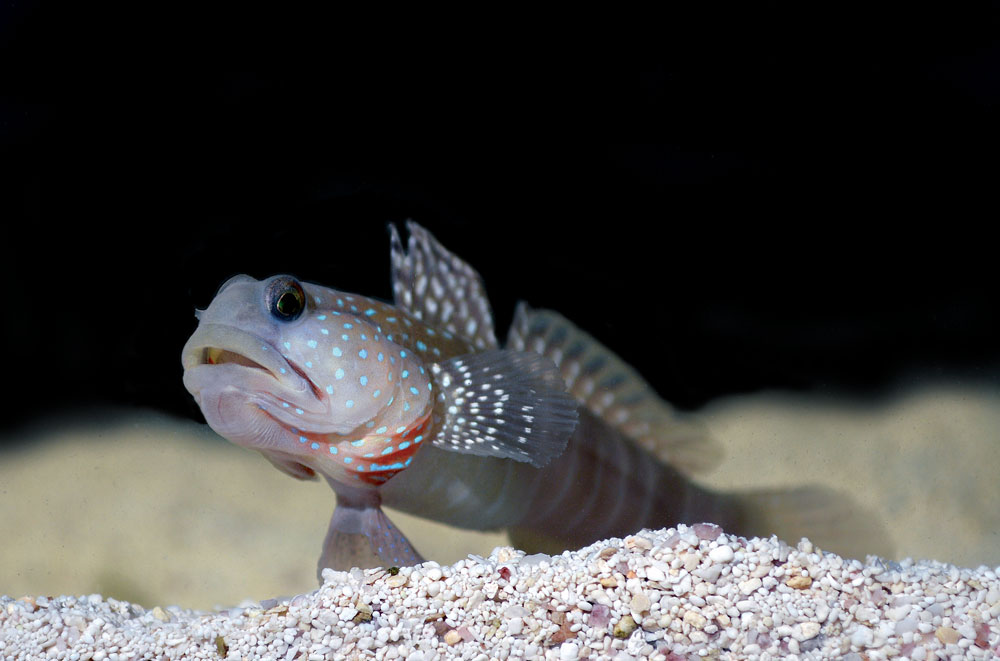 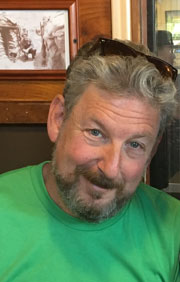 With focus on further expansion of Green Mandarin Dragonet production, along with rumors of expanded pygmy angelfish offerings (including the Midnight Angelfish, Centropyge nox; and the Multibar Angelfish, Paracentropyge multifasciata), Biota is offering some tremendous flagship species supported by a solid cast of additional species for aquarists to enjoy, and every last one is the product of aquaculture. It could be a formula for success—a boon to the reputation of livestock that is captive-bred, tank-raised, and cultured.

“Anything that’s [aquacultured], we’re on board,” says Fefferman. “We know the duress that the industry is under. We get blamed for over-collection, but I don’t think it’s true. Still, anything we can do to become more sustainable with the sourcing of our livestock is a benefit to the industry and the reefs.”

Biota produces both captive-bred (CB) and captive-raised (CR – not spawned in captivity) fish.

Biota reports that current research is looking to expand production of basslets, Pseudochromids, large and dwarf angelfishes, and tangs, focusing on species already in high demand within the existing aquarium trade. 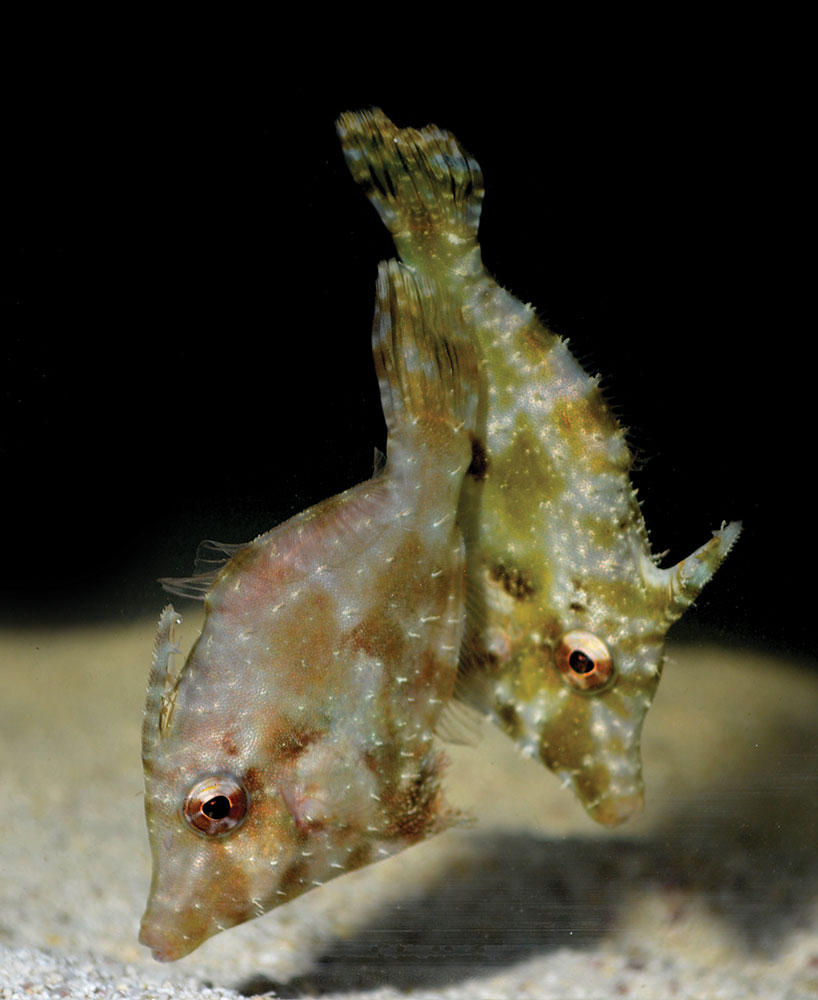 Regulations in Palau prohibit the export of stony corals, which restricts Biota’s efforts to soft corals and related species.

Corals such as Ricordea yuma and other Palauan soft corals are being evaluated for possible future production, mainly hinging on production capabilities and demand.

Tridacnid clams are the product of spawns from collected broodstock at Biota. Four species are in production:

Additionally, the Teardrop Maxima, Tridacna noae, is currently being grown to market size and is anticipated for market introduction by the end of summer. The Giant Clam, Tridacna gigas, represents a species under development, with no set timeline for market introduction. In addition to these invertebrates, Biota also reported that efforts are underway to produce the Aiptasia-eating Nudibranch, and the Peppermint Shrimp, at the Biota Aquariums facility in Florida. 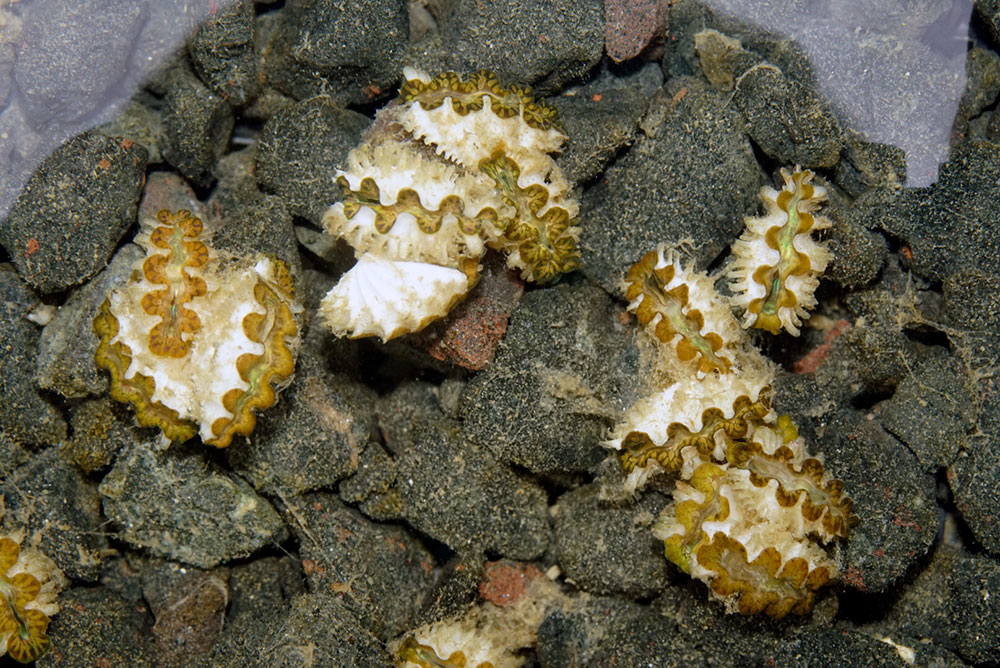