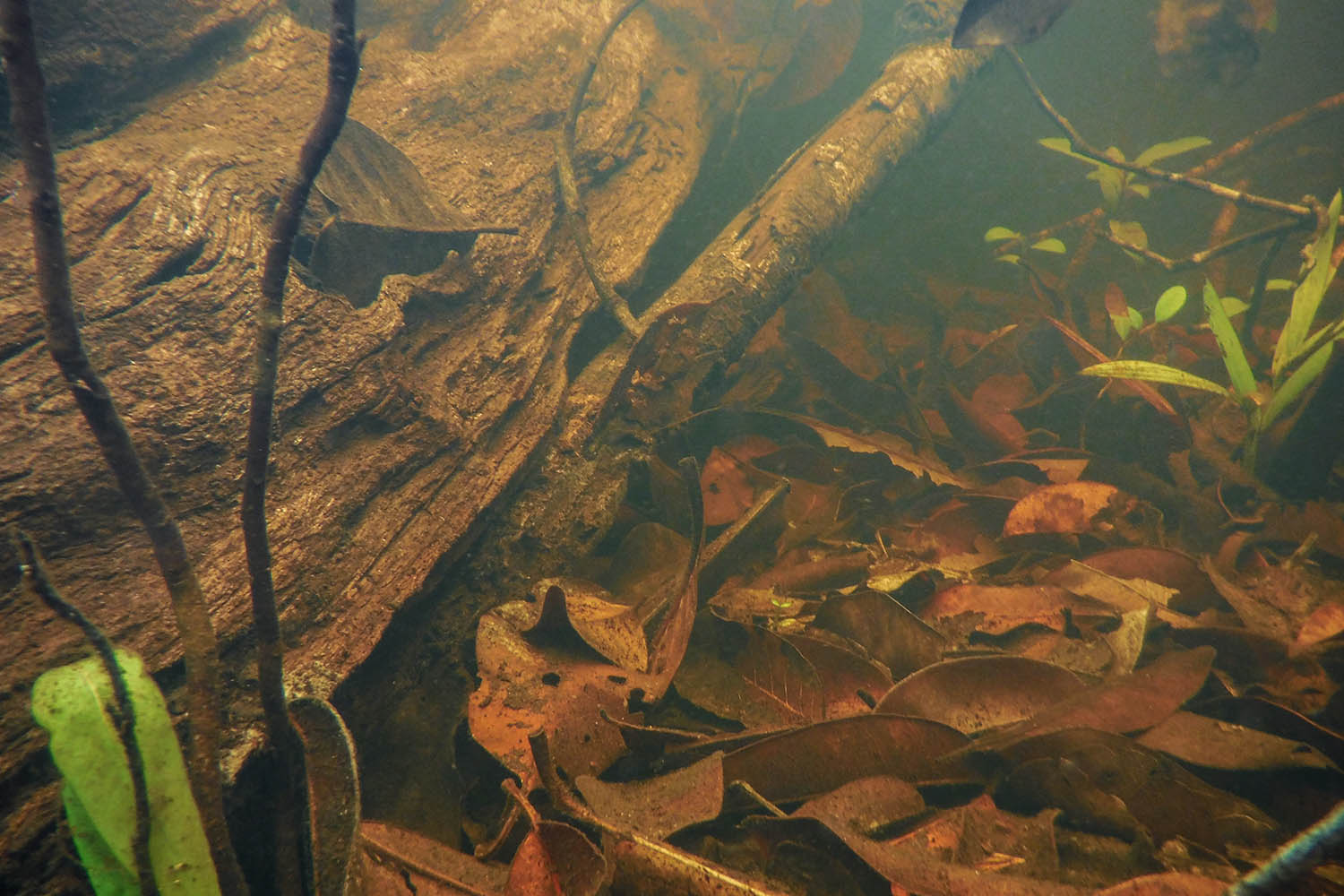 A typical shallow water scene in the middle Rio Negro like this—home to Cardinal Tetras (P. axelrodi) and many other popular aquarium species—served as inspiration for my most recent biotope aquarium

In the most recent (July/August 2017) issue of AMAZONAS, I concluded a two-part exploration into the many unique microhabitats found throughout the middle Rio Negro in Brazil and an in-depth look at how to recreate them in an aquarium. In the years since I first visited this aquarium hobbyist’s paradise in person—getting the chance to observe fish I’ve kept for years in their natural habitat—I’ve spent many hours applying the lessons learned from this (and subsequent visits to the region) to my own home aquariums, attempting to recreate a selection of different biotopes from the region. Some were more successful than others, and as with most aquarium-keeping endeavors, there were lessons to be learned even in the failures. The most recent biotope aquarium I had the opportunity to set up was, in many ways, the culmination of this trial and error approach, and the end result was the closest I’ve come yet to recreating the shallow water habitat of the Cardinal Tetra (among many other species).

While this aquarium (along with several others) is featured in the current issue of AMAZONAS, I wanted to use this shallow water igapó (flooded forest) tank as an example of how to set up a functional, attractive biotope in step-by-step detail from start to finish. With that goal in mind, I documented each step of the setup process, from preparing the substrate to aquascaping on through to the addition of fish for a special web supplement to the print feature Biotope Aquariums of the Rio Negro. 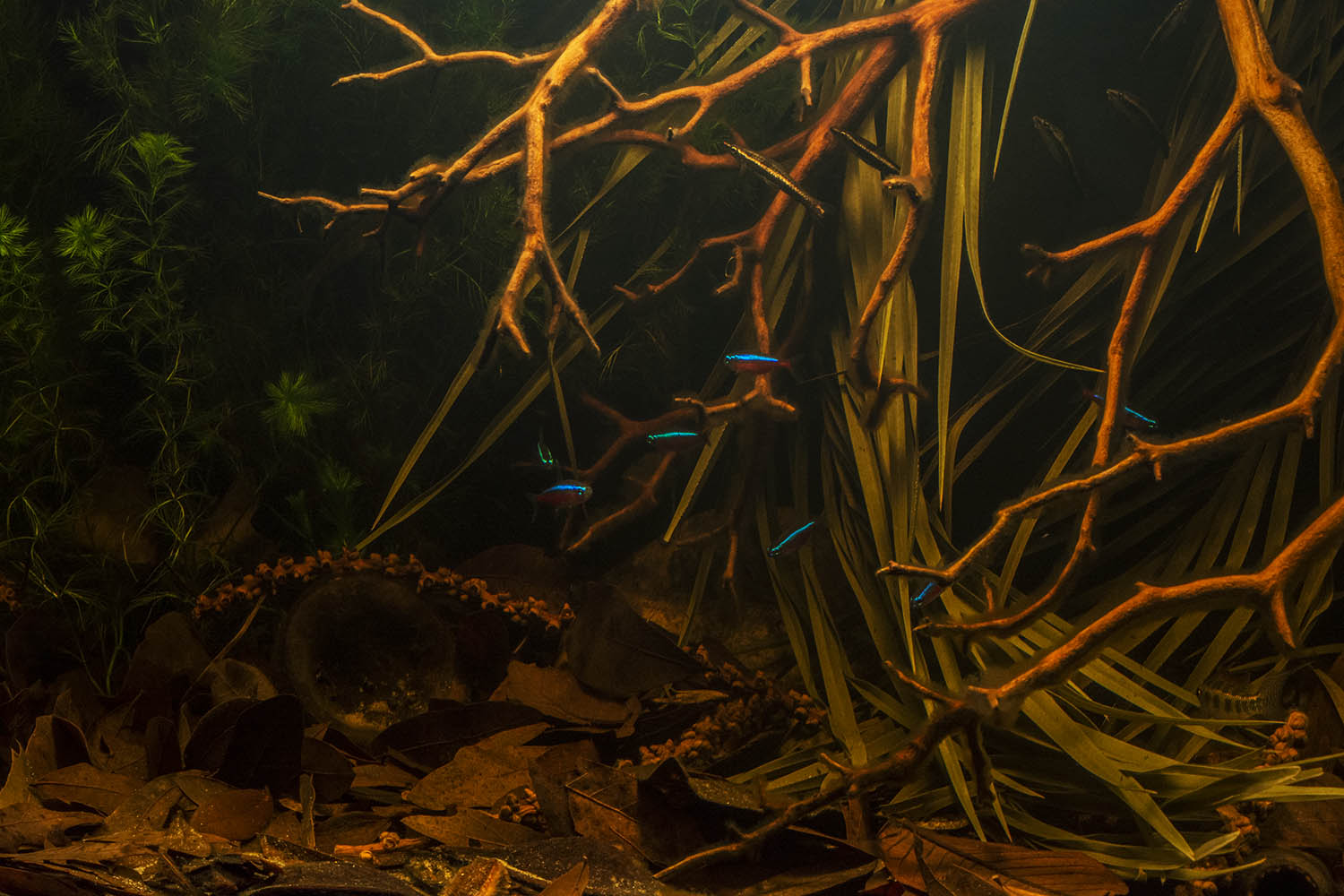 The finished product, stocked with habitat-appropriate fish species, evokes the look and “feel” of the blackwater shallows of the Rio Negro quite effectively

While the overall area of shallow flooded forest habitat throughout the Negro is truly vast, covering thousands of square kilometers during the peak high-water season, many of the actual spaces that smaller fish species like tetras inhabit occur on a relatively small scale. Aquatic scenes like a submerged root system, a dense pile of fallen leaves, or the shaded banks of a winding blackwater creek lend themselves well to being recreated in even a smaller aquarium, so with that in mind I chose to use a 15-gallon Fluval Flex all-in-one aquarium as the basis of my shallow igapó biotope. The cube-like dimensions (16 x 15 x 15″) lent themselves well to aquascaping, and the black background (which conceals the filtration and heater behind it in a separate compartment) helped to add a sense of depth that can be difficult to achieve in smaller aquariums. With a relatively low bioload planned for the tank in terms of fish, the built-in filter would be more than adequate, although I removed the activated carbon as it would remove the tannic substances from the water and reduce the heavily-tinted look I was aiming for. 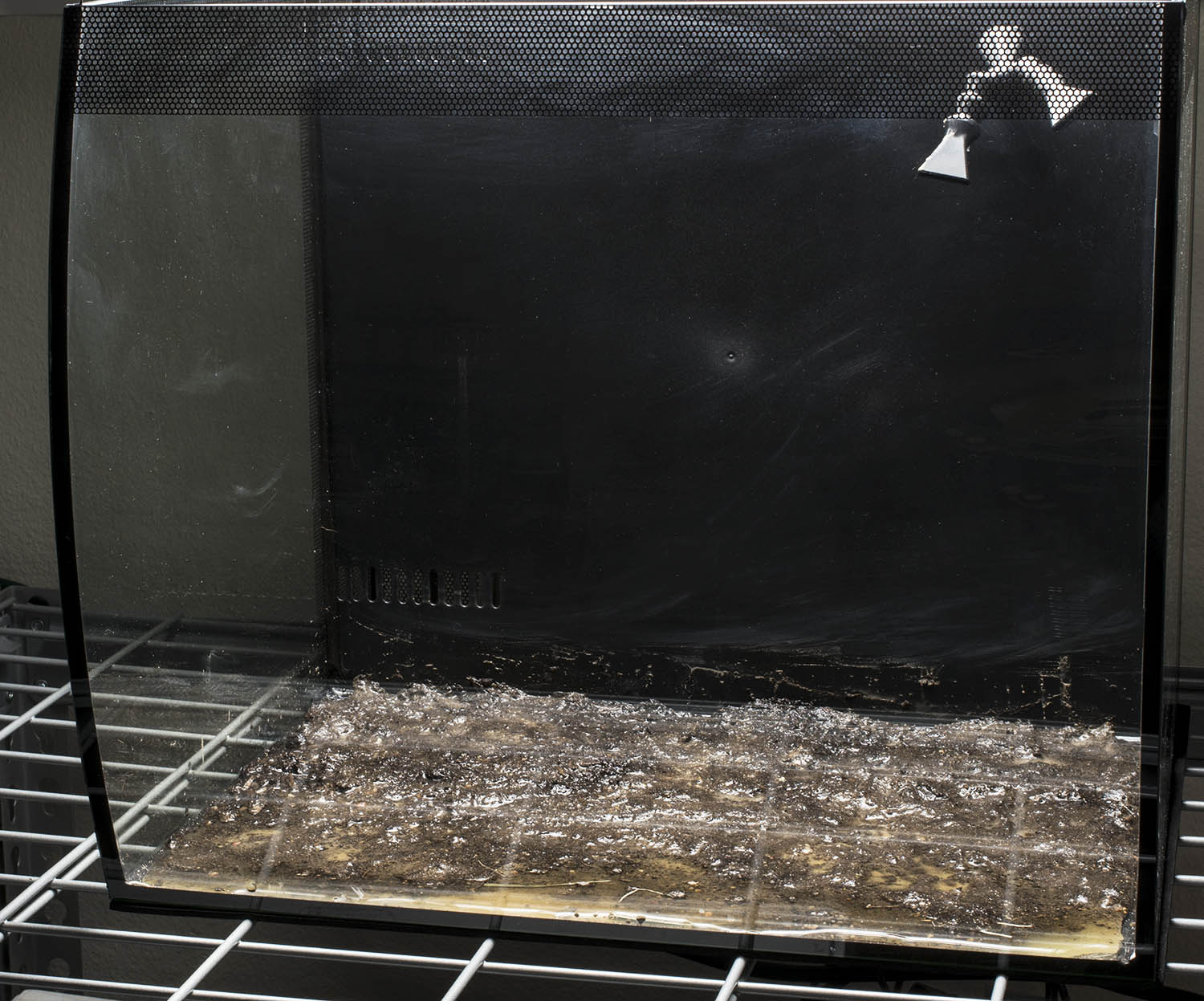 The addition of a layer of rinsed, organic potting mix beneath the substrate was the first step in trying to replicate the detritus- and nutrient-rich substrates found in typical igapó habitat

Through long discussion with fellow blackwater aquarium fanatic Scott Fellman (of Tannin Aquatics), I became interested in the role that substrate can play in a freshwater aquarium even if aquatic plants aren’t intended to be a focal point of the tank. In the Negro, as with other blackwater river systems worldwide, the river bottom—especially in shallow, slow-moving creeks and tributaries—is often a repository for a huge collection of organic matter in various states of decay or decomposition. From submerged branches and logs to fallen fruit, nuts, and seed pods to the ever-present dense carpet of leaf litter, the substrate in most typical igapó habitats is a complex and biologically rich environment—in some cases a microhabitat of its own. With this aquarium, I wanted to experiment a bit in hopes of coming closer to replicating not only the form but the function of this rich source of organics. To do so, I used a technique long known to planted aquarium hobbyists—a “dirted” tank. I took some organic potting mix and over the course of a few weeks rinsed and dried it several times until I had a nice, dense, almost clay-like bottom layer to use in the tank. 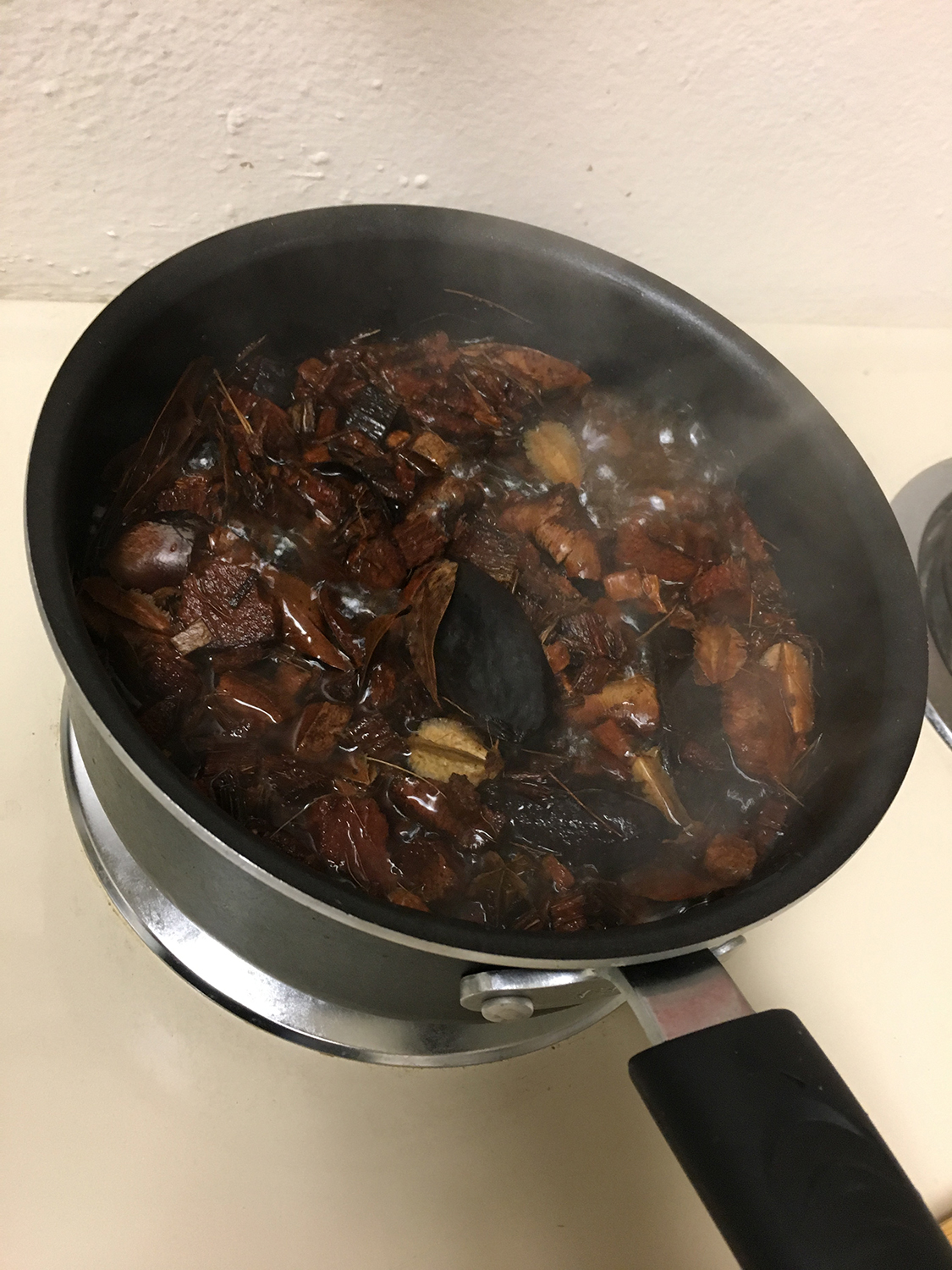 For the next layer of substrate, I used my go-to light-colored sand—Sunset Gold by CaribSea—but I wanted to add an additional layer of “enrichment” to leach out tannic acid and other substances over time. For this, I used an array of different botanicals from Tannin Aquatics’ extensive selection, including their “fundo tropical” substrate enhancement media, mariposa pods, banana stem pieces, and their crushed leaf litter mix. 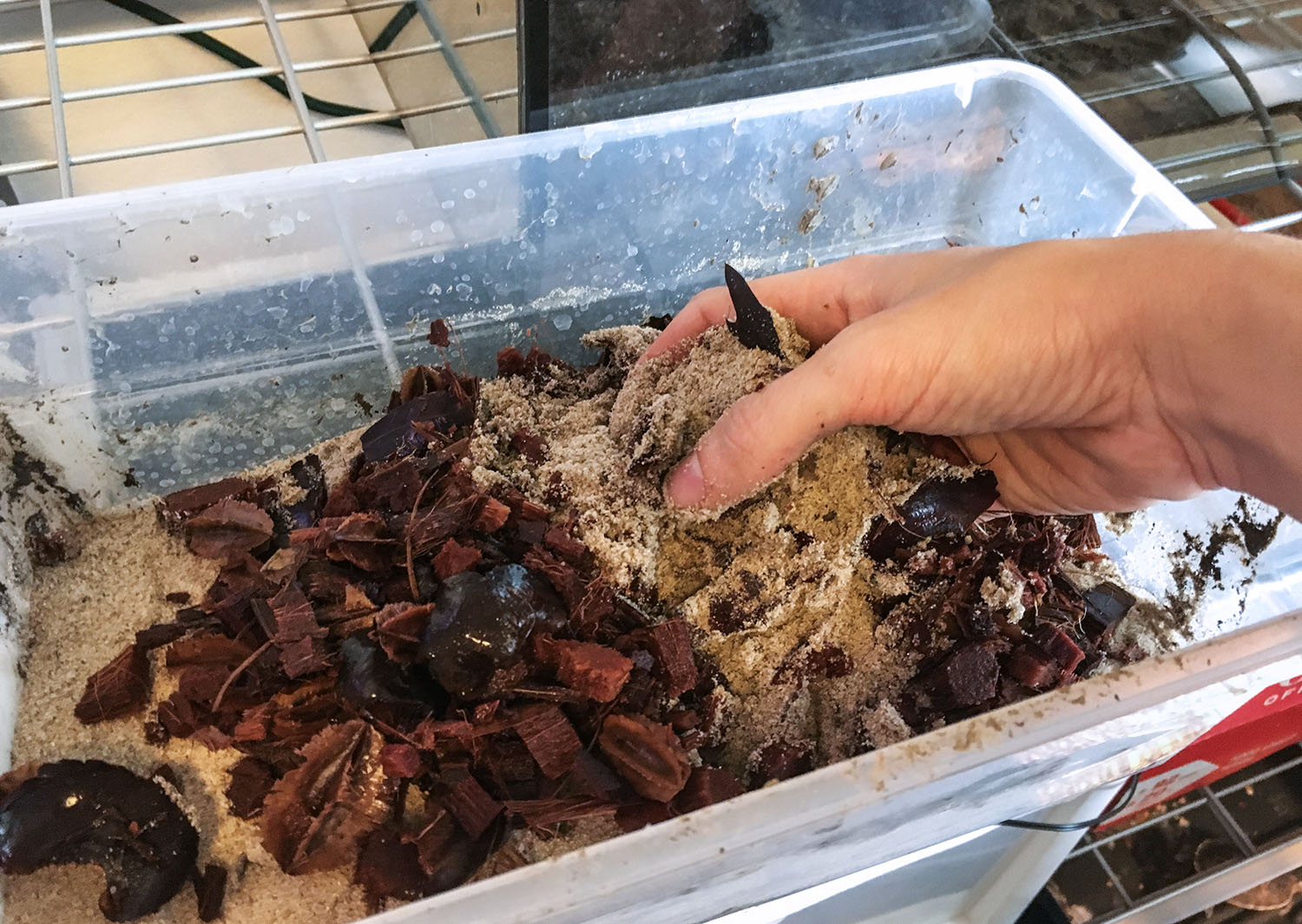 To this, I added a generous handful of Dwarf Magnolia leaves, which I mixed in to the sand by hand after preparation, in this case boiling for nearly an hour. The end result was a nicely heterogeneous mix of fine sand and botanical materials which was then spread out over the bottom layer of dirt, completing the substrate. 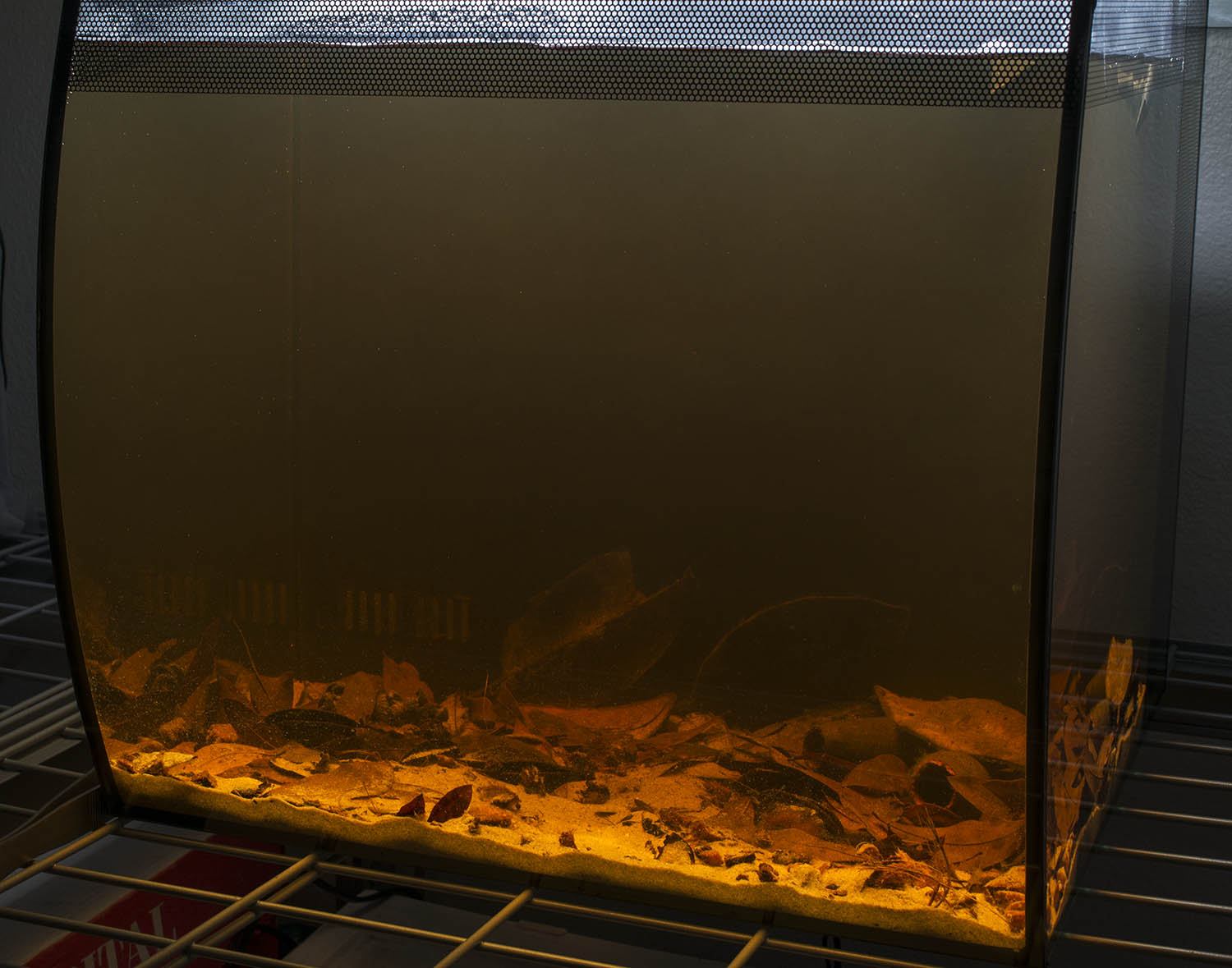 The tank just after being filled with water, already showing a healthy tint due to all the botanicals in the substrate 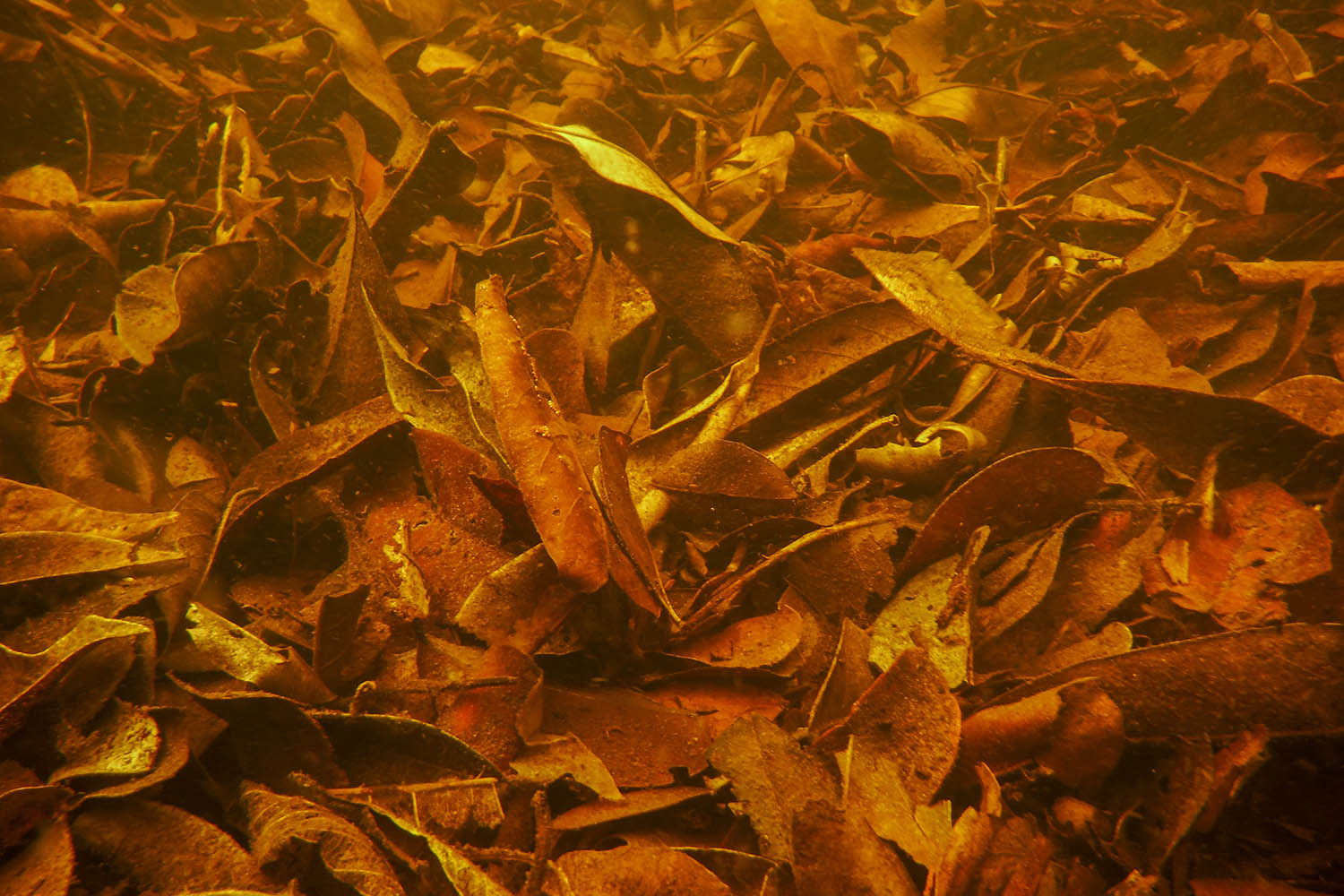 The defining feature of the igapó habitat I was attempting to recreate in this aquarium is not rocks, driftwood, or plants, but rather the dense carpet of leaf litter seen in almost all shallow areas

Unlike the trending style in planted and aquascaped aquariums, which tend to be dominated by elaborate hardscapes and neatly arranged layers of plants, the wild habitat of the Cardinal Tetra tends to be a messy place, and one generally devoid of both rocks and aquatic vegetation. Driftwood is found in abundance, but in the extreme shallows this is often limited to small sticks and twigs, and it is rarely the dominant feature of this habitat type. With that in mind, I set out to create a “softscape” composed largely of botanicals—leaf litter, seed pods, and other accent pieces. Working from the bottom up, I added a dense carpet of dried leaves—primarily Dwarf Magnolia leaves, which are both appropriately-sized for a smaller setup and slow to decay—to replicate what is often the defining feature of shallow blackwater igapó. From there, an assortment of seed pods, which would serve both as accents and as cover for the fish, were placed in the tank. 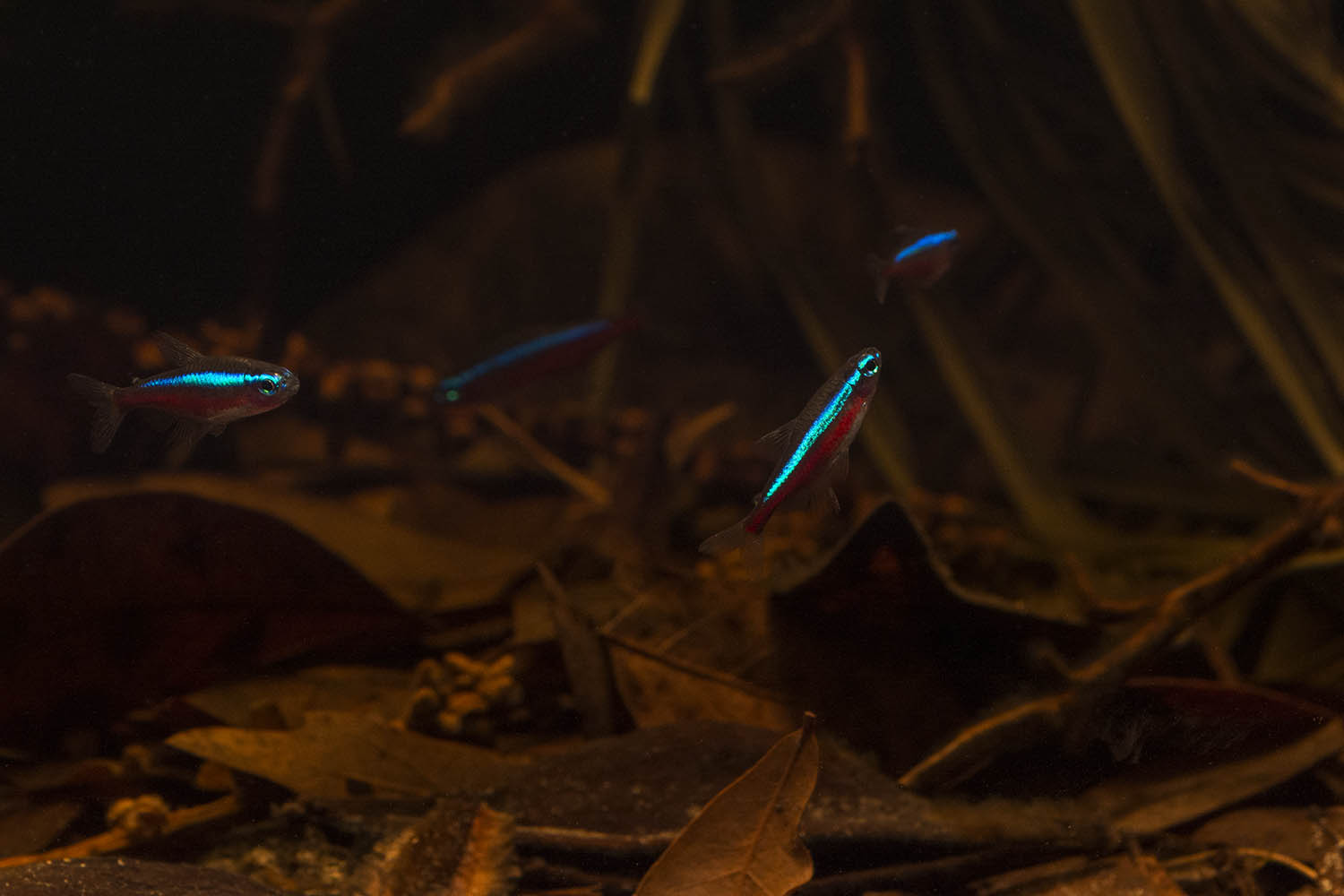 With the lower level completed, I added the only real “hard” element of this aquascape—a small branch of manzanita driftwood—which I propped up above the filter output to give the appearance of a fallen branch extending downward into the water. Orienting the driftwood from the surface down (as opposed to substrate-up) not only looks more natural in this setting but also gives the layout an additional dimension, suggesting tangled branches above the water’s surface. After some time playing with the arrangement, it was clear the ‘scape lacked something, especially in the bare back left corner of the aquarium. Reviewing some of my underwater photos and videos from the Rio Negro, I came across inspiration in a flash of green, not a color often seen in that environment. Although vegetation—especially true aquatic plants—are scarce in the acidic, tea-brown waters of the Negro, plants do occasionally make an appearance in the shallows. With that in mind, I took a sprig of Myriophyllum sp. “green” that had been growing unchecked in another tank (like the aquatic weeds they are) and planted it directly into the problem area of the tank. The effect was immediate, and the splash of color the plant added to the otherwise earthy-brown tank balanced the entire aquascape nicely. A large “monkey pot” seed pod placed just in front of the plant, along with some dried fishtail palm stems layered around it, helped blend the disparate elements of the layout together in a subtle but appreciable way. 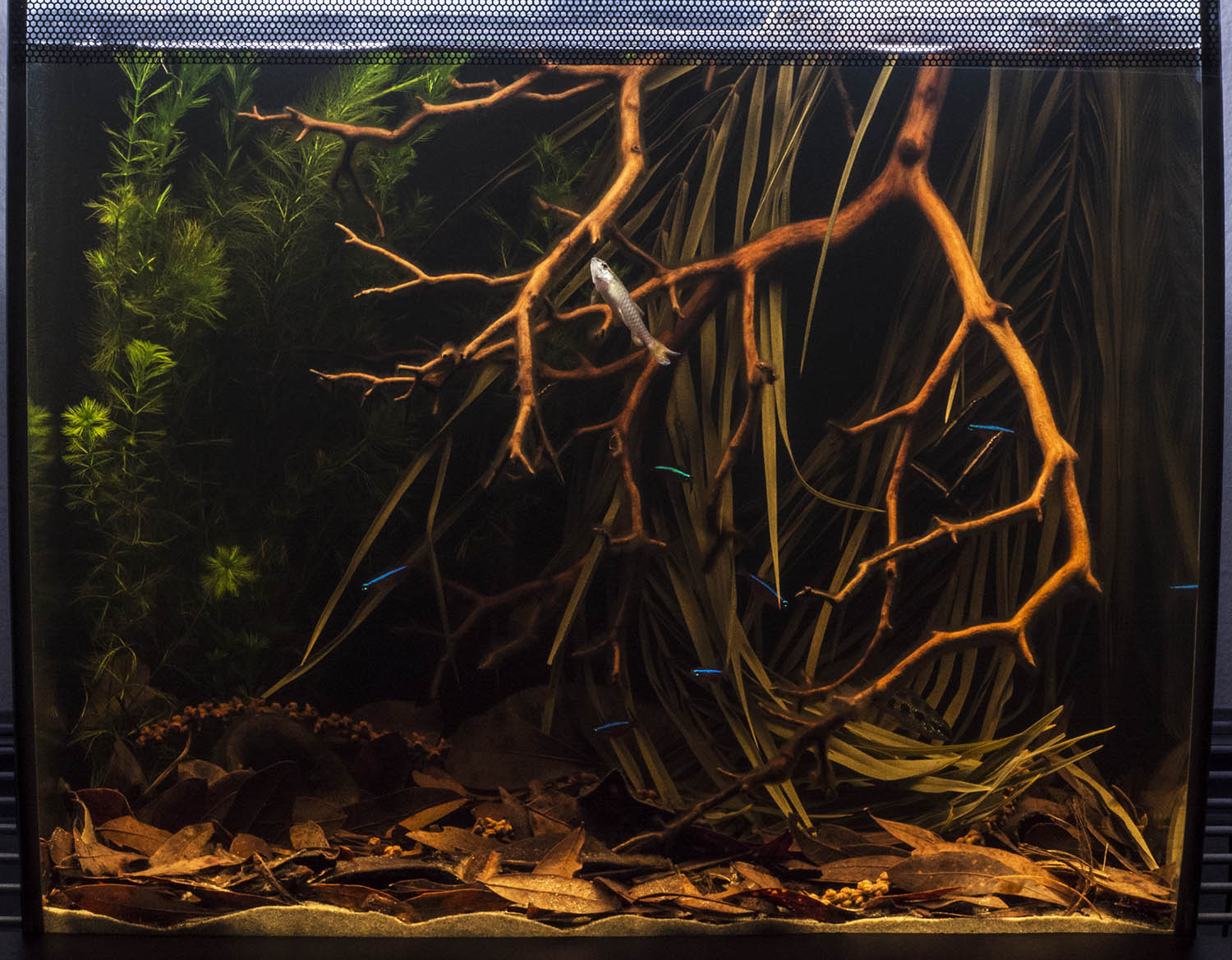 The completed, botanical-heavy aquascape contained all the elements that distinguish typical shallow-water igapó habitat in a natural-looking layout

Intended to be something of a finishing touch, I added a dried palm frond draped behind the manzanita branch. Submerged palm fronds are extremely common in flooded forest habitat throughout the Negro, and I was curious to see how this would look in an aquarium setting. I was pleasantly surprised with the end result: not only did it blend perfectly into the existing aquascape (without being overbearing in the least), it was exactly the final piece that this tank needed to give it that bit of “wow” factor. 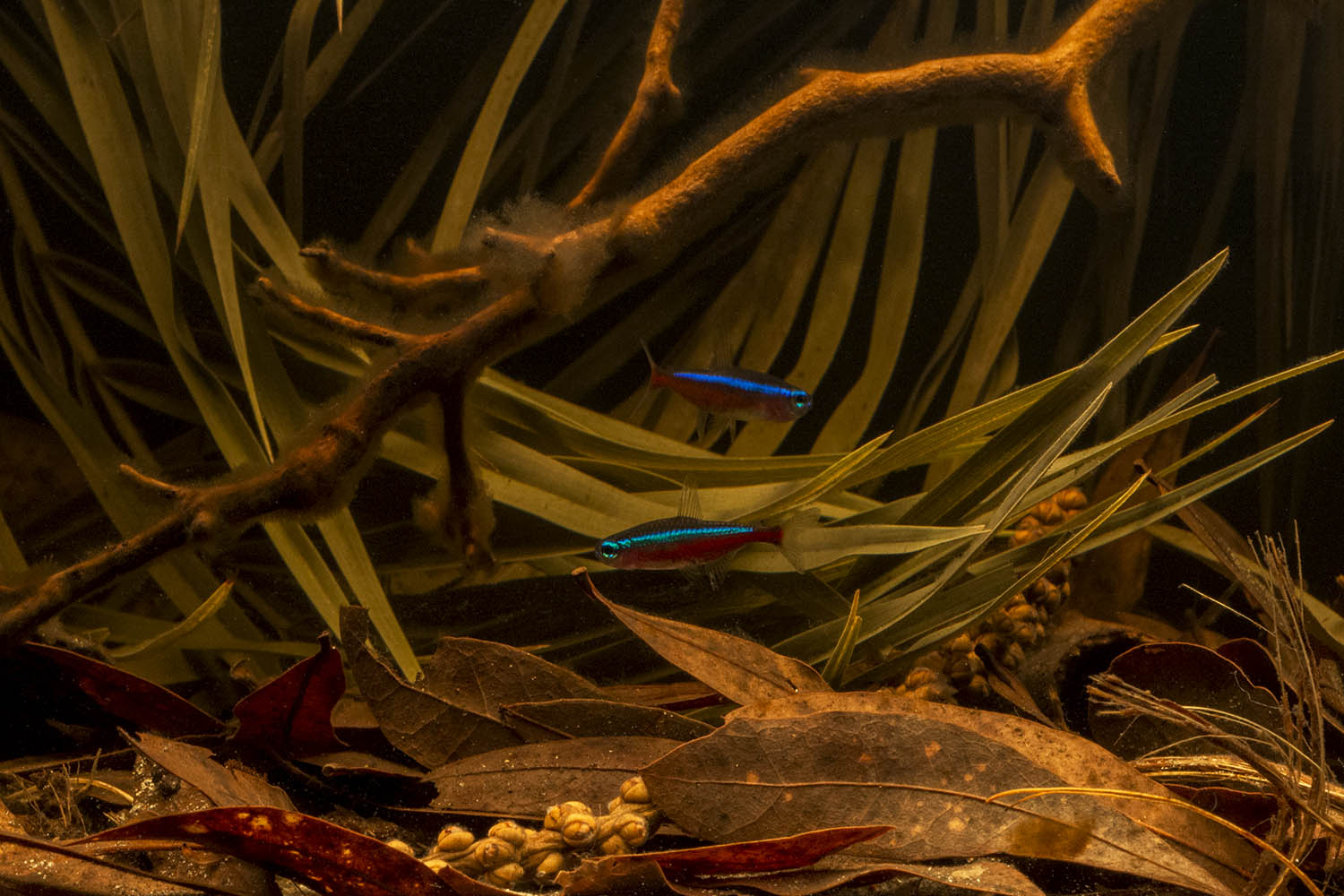 Dried palm fronds, a common sight in shallow flooded forest areas, provided the perfect backdrop for the aquascape and natural cover for the fish

Designed around the habitat of the “poster child” of the Rio Negro’s aquarium fish (the Cardinal Tetra), the tank would not be complete without a small school of said fish. A group of seven wild-collected fish formed the centerpiece of the aquarium and replicated how the fish is most often encountered—in smaller groups as opposed to huge shoals. Another commonly-seen fish in the extreme shallows is the Diptail or Eques Pencilfish (Nannostomus eques), one of my favorites of the genus. A pair of Checkerboard Cichlids (Dicrossus maculatus) and a single Pyrrhulina sp. (a close relative of the Splash Tetra) rounded out the tank’s inhabitants. Immediately upon their introduction to the tank, the fish began displaying typical natural behaviors: Checkerboards eagerly shuffling through the leaf litter, Cardinals forming a school hierarchy, and Pencilfish hovering close together near the surface. 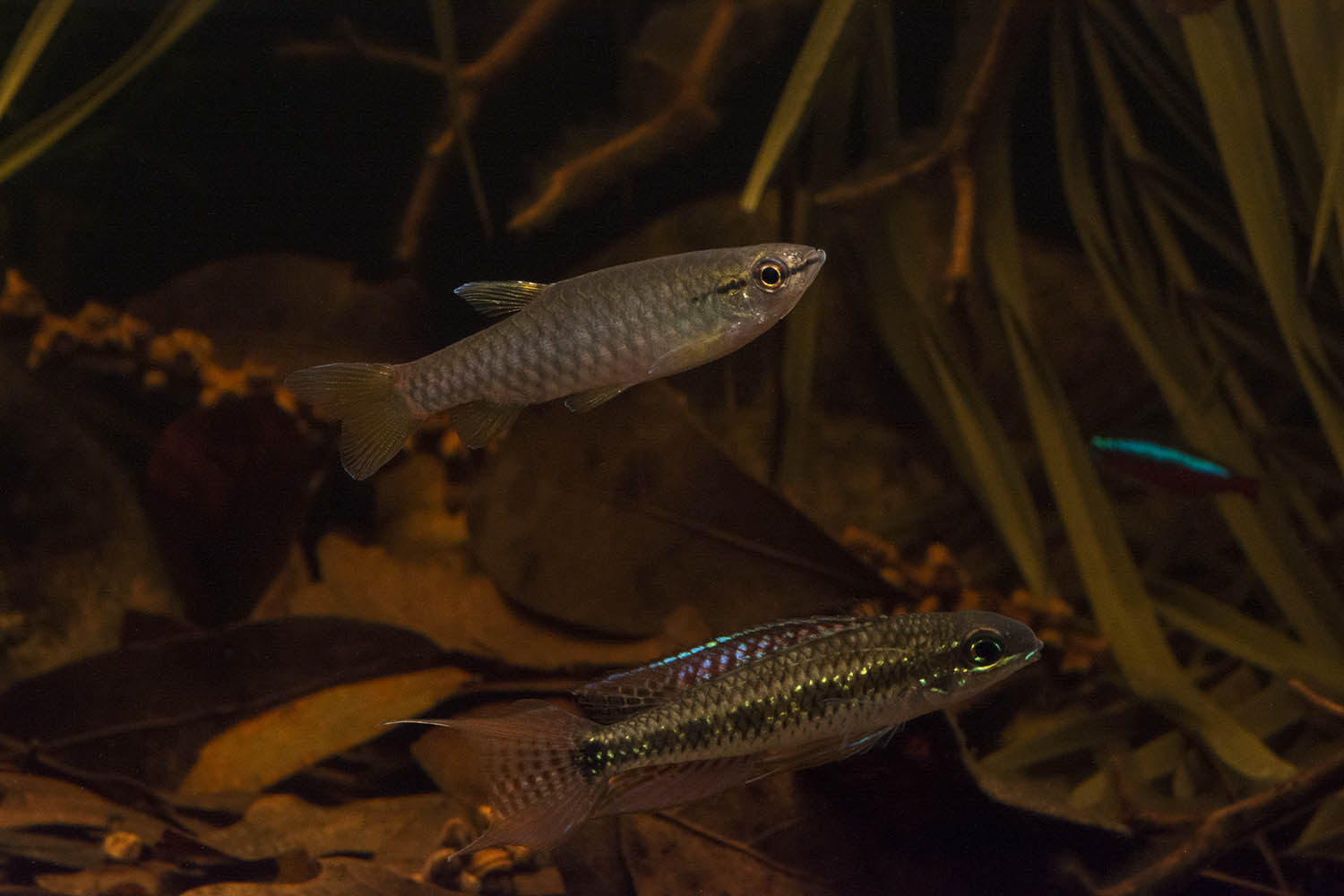 Taking a step back to look at the completed aquarium, fish and all, I was extremely pleased with the finished product—by far the closest I’ve come yet to replicating the unique aquatic habitat of the Rio Negro. Between the tinted water, leaf-litter dominated scene, and submerged palm fronds gently swaying in the current of the filter output, this aquarium really stood out as a functional yet aesthetically pleasing replication of a familiar scene from the shallow igapós and blackwater creeks of the middle Negro—wild habitat where many of our most beloved aquarium fish originate.