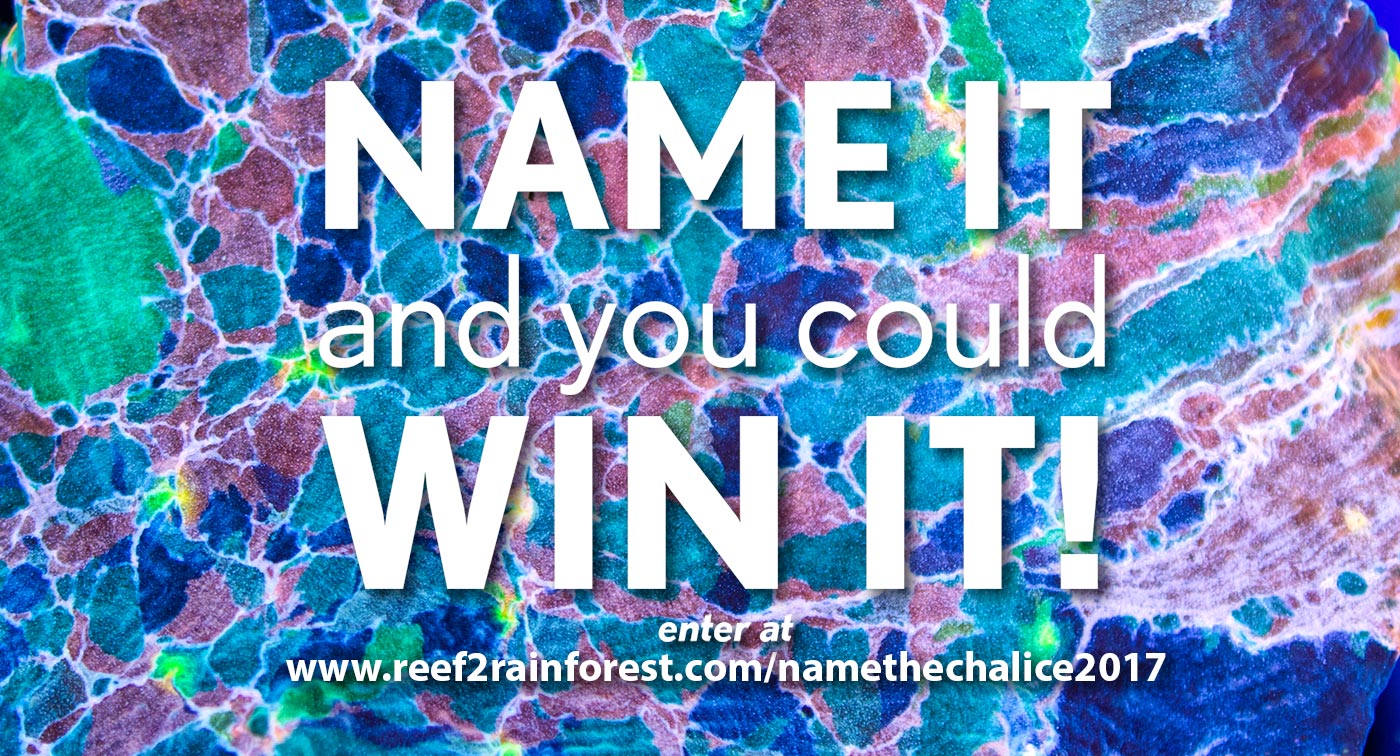 A new #NameTheChalice contest for 2017, sponsored by Carolina Aquatics and CORAL Magazine.

Learn more about the unique new Chalice Coral imported by Carolina Aquatics, and be sure to read the official rules and then submit your entry in the comments section of this page. UPDATE – Note, this contest is now closed. Learn more about the winner here.

With the vast growth of the reef aquarium trade, one could argue that number of corals unknown to aquarists is rapidly diminishing. Still, once in a while, a new variety is discovered that will stop even the most seasoned coral hoarder in their tracks. Such is the case with the latest introduction from Carolina Aquatics, a saltwater livestock wholesaler based in Kernersville, North Carolina.

Kris Cline, founder and president of Carolina Aquatics, reports that they received only two of these corals. When sharing first images of the coral, Cline simply quipped, “This one is going to be HOT, I think.” First impressions are everything, and reactions from everyone who has caught a glimpse of this photograph decisively support Cline’s assessment of this new chalice coral. 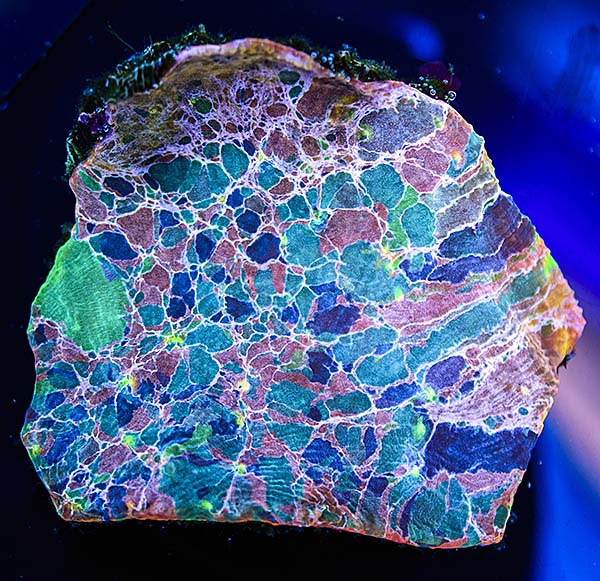 Looks can be deceiving; this mother colony is roughly 4″ (10 cm) across.

“Now that is astonishing. Ohmigawd Dept!”

“Oh my freakin’ god. Holy —- …have you ever seen anything like that? That’s one to hold and culture!!!”

We even passed this image along to Jason Fox, a CORAL Visions contributor who’s well known for his taste in exceptional coral morphs. Fox perhaps offered the most restrained response, noting “I’ve seen this type of chalice from Indonesia, but not with as crazy a pattern as the one pictured.”

The new unnamed Chalice Coral variant hails from Jakarta, and arrived at Carolina Aquatics late 2016. Only two distinct colonies, both visually identical, were received, and were presumed to be the same coral. What makes this coral even more interesting is that it didn’t always appear this mind-blowing; looking back at the original images from the coral exporter, this Chalice may have simply started out as a relatively unassuming reddish variety with chartreuse coralites and only small splashes of differing color. But now, the coral is a jaw-dropper.

While Carolina Aquatics is not known specifically for culturing corals, this variety instantly earned tank space for limited, select propagation. One of the two specimens has been reserved intact, while the second was fragmented in late February, 2017. The frags have since healed and are showing signs of slow growth. All the specimens are currently being housed under T5 lighting. 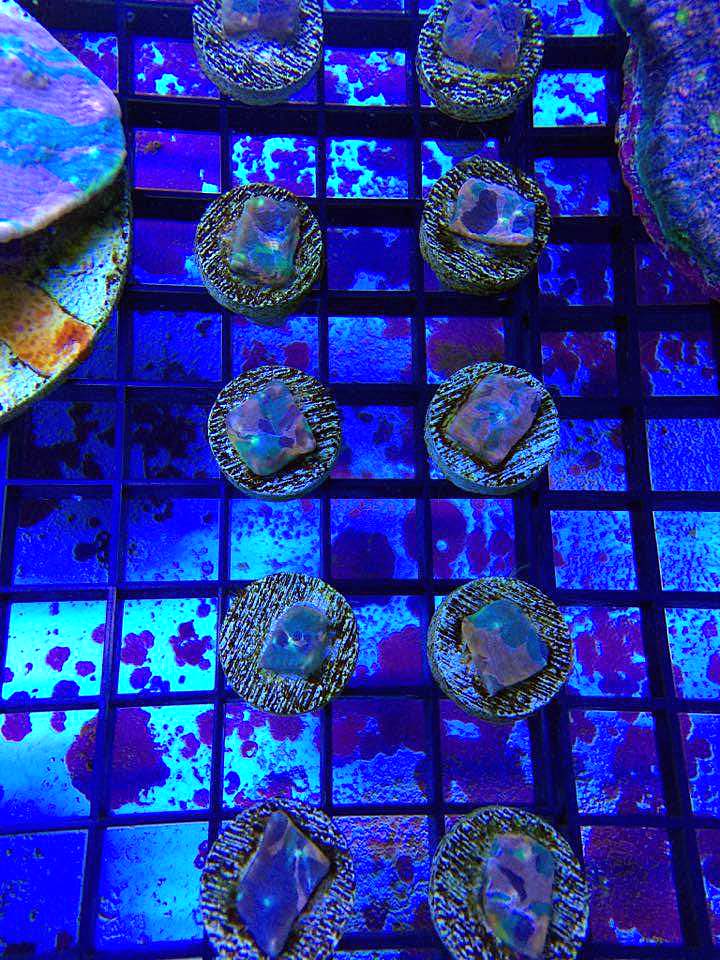 Several frags of the new chalice coral growing out at Carolina Aquatics.

Carolina Aquatics expects to start offering cultivated frags exclusively to their wholesale customers in limited numbers in the coming months, but this coral needs a unique trade name. Following the successful “crowd naming” of the Toxic Zebra Chalice for A&M Aquatics back in 2015, CORAL Magazine readers are invited to post their suggestions, and Carolina Aquatics is ready to show its appreciation.

The aquarist who supplies the name chosen will receive a frag of the new coral, compliments of Carolina Aquatics. Shipping to continental U.S. (lower 48 states) only. New for this edition of our #namethechalice contest, Kris Cline has offered a social media challenge prize, which CORAL Magazine will also match. See contest rules below:

Carolina Aquatics sells wholesale only to the aquarium trade.

A single (1) Chalice Coral Frag of the currently unnamed variety – or – A Three-Year Subscription to CORAL Magazine
(Frag Shipping only to an address in the continental U.S. [lower 48 states])

One-year Digital Subscription to CORAL Magazine
(Available to all entrants)

The grand prize winner shall have his/her choice of prize.

1] The #NameTheChalice contest is open to everyone except contributors, advertisers, and staff of CORAL Magazine, Reef to Rainforest Media, LLC, along with employees of Carolina Aquatics and its subsidiaries, as well as the immediate families of all the aforementioned.

2] The live no-name chalice coral frag prize option will be shipped only to an address in the continental U.S. (lower 48 states).

3] To enter, you must comment on this page with your proposed name for the no-name chalice coral cultivar. Entrants must include a valid email address in the email field, required for contacting the selected winner. In the event that the winner cannot be contacted, no prizes will be awarded to any other participant. CORAL / Reef to Rainforest Media, LLC, is not responsible for entries not received / marked as spam on Reef2Rainforest.com; be sure your comment is in public view.

5] One winning name will be selected from all entries by Carolina Aquatics. Three runners-up will be chosen by the editors of CORAL Magazine. Winners will be announced on this website.

6] In the event that there are multiple identical/duplicate submissions of the winning name, only the first person to have submitted the name will be eligible to receive the prize. All comments are time-stamped and saved by the website software for accurate determinations.

7] Shipment of the live coral prize to the winner is handled by Carolina Aquatics. Given the exclusive nature of this coral, no guarantees of live arrival or subsequent survival are made by CORAL, Reef To Rainforest, or Carolina Aquatics.

8] In the event that the prize becomes unavailable due to circumstances beyond the control of Carolina Aquatics, a similar, comparable frag of the same chalice coral will be furnished by Carolina Aquatics.

9] Any and all applicable taxes are the sole responsibility of the winner(s).

The rules and availability of the second prizes are the same as the initial PRIZES listed above; either a single (1) Chalice Coral Frag as outlined above, or a second (3) Three-year Print + Digital subscription to CORAL Magazine, will be offered to the bonus-prize winner. The winner of the bonus prize will be selected by Carolina Aquatics as the 2nd-choice, a runner-up, from all the name entries submitted on this page.

SUBMIT YOUR ENTRIES BELOW!