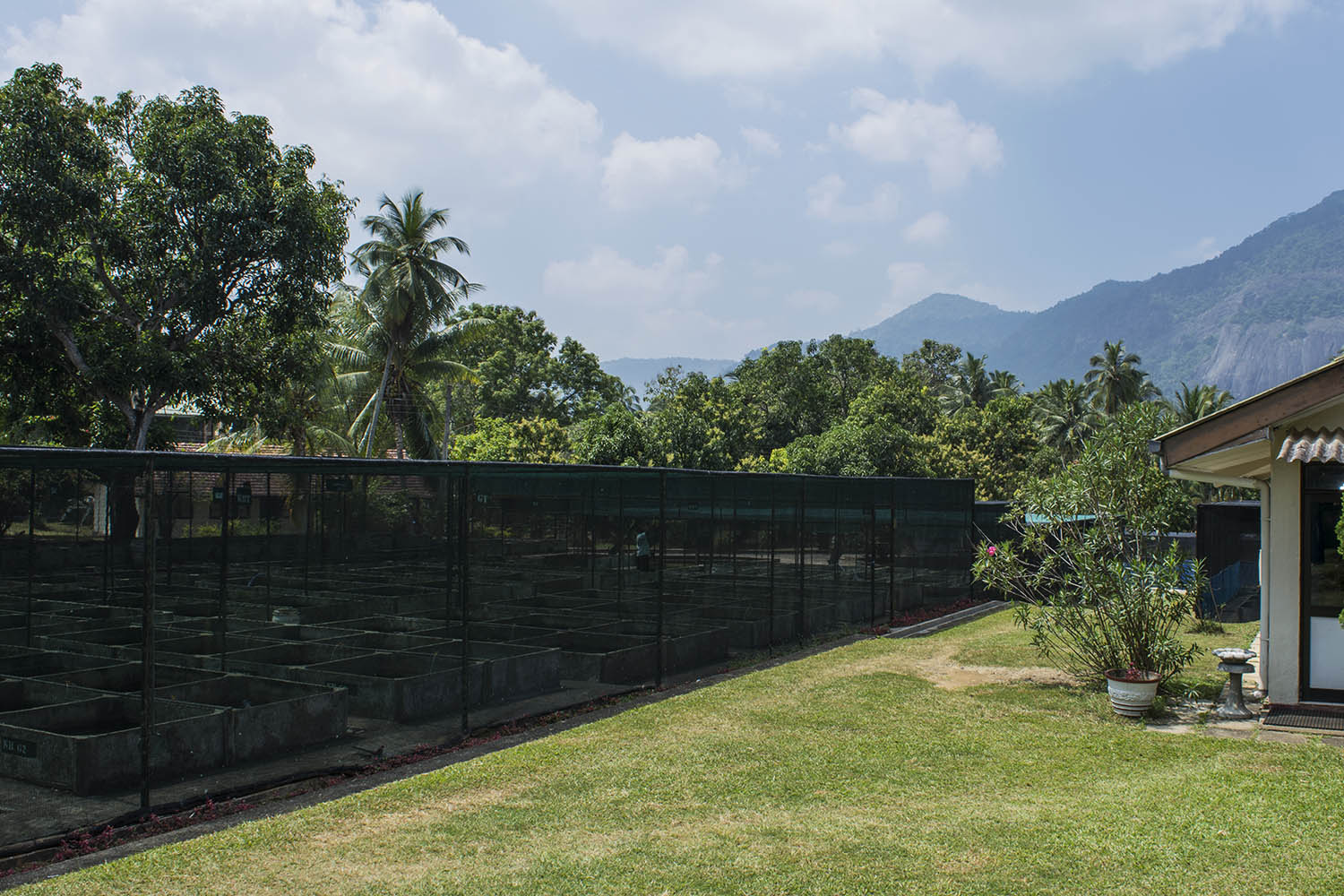 Situated in the tropical highlands of Sri Lanka’s Hill Country, the ornamental fish breeding and training center at Rambadagalla is an expansive complex of farms, laboratories, and support buildings

Last month, I had the pleasure of presenting at a conference on the aquarium trade in Colombo, Sri Lanka, along with a number of Sri Lankan and international speakers. After the conference, speakers and international visitors were treated to a trip to the country’s main center for aquarium fish research and development—the Ornamental Fish Breeding and Training Center at Rambadagalla, in the country’s hilly interior. A joint effort between the Ministry of Fisheries and Aquatic Resources Development and the National Aquaculture Development Authority (NAQDA), this facility is one of the world’s very few (if not the only) government-sponsored training centers focused solely on fish in the aquarium trade. After a long but scenic bus ride from coastal Colombo to the rural central highlands, our group arrived at the expansive and picturesque campus, nestled among the hills in Sri Lanka’s main fish farming region. 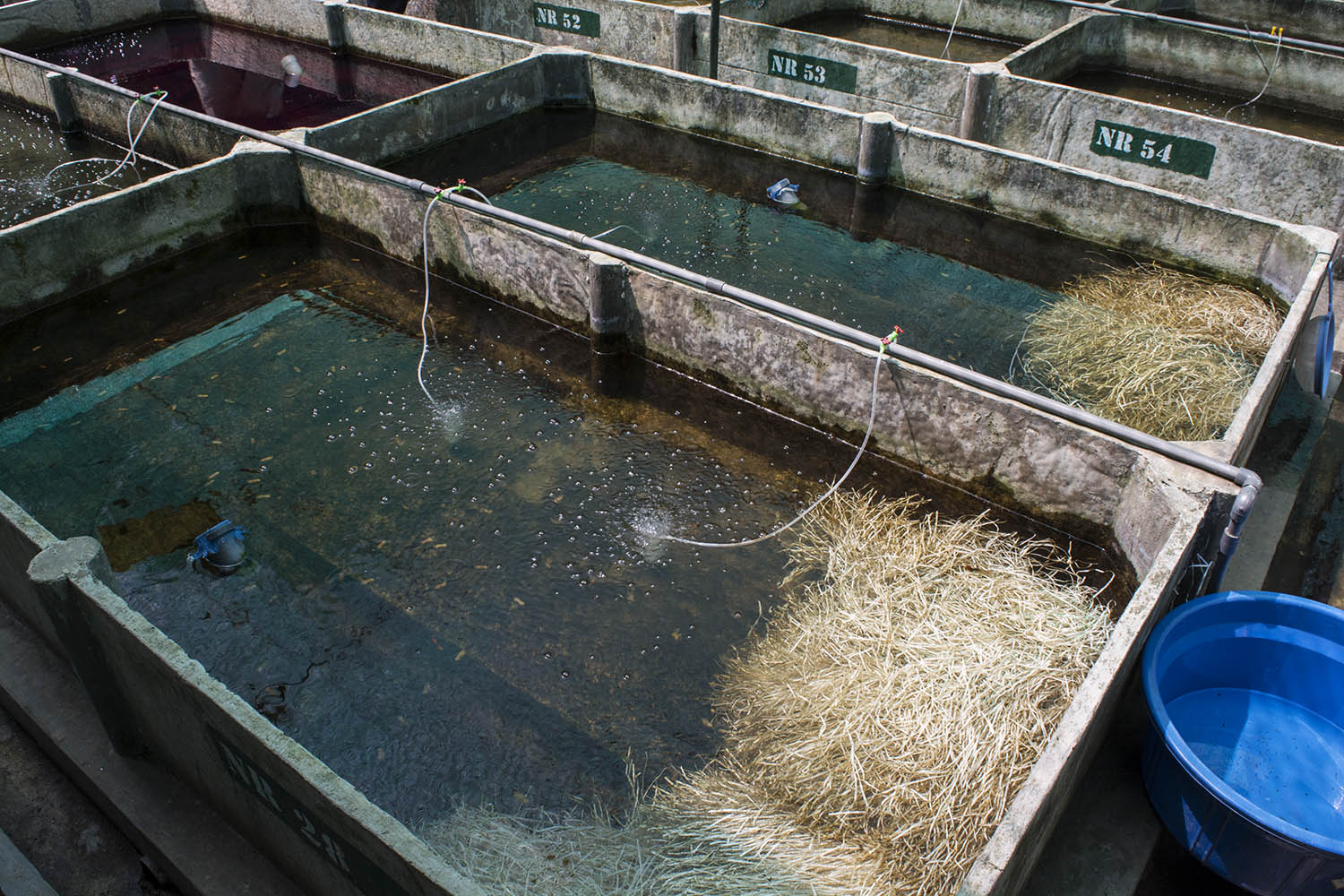 Guppies and other livebearers are among the country’s main fish exports. Breeding ponds like this one include fibrous barriers for fry to hide in so they are not eaten by adult fish. 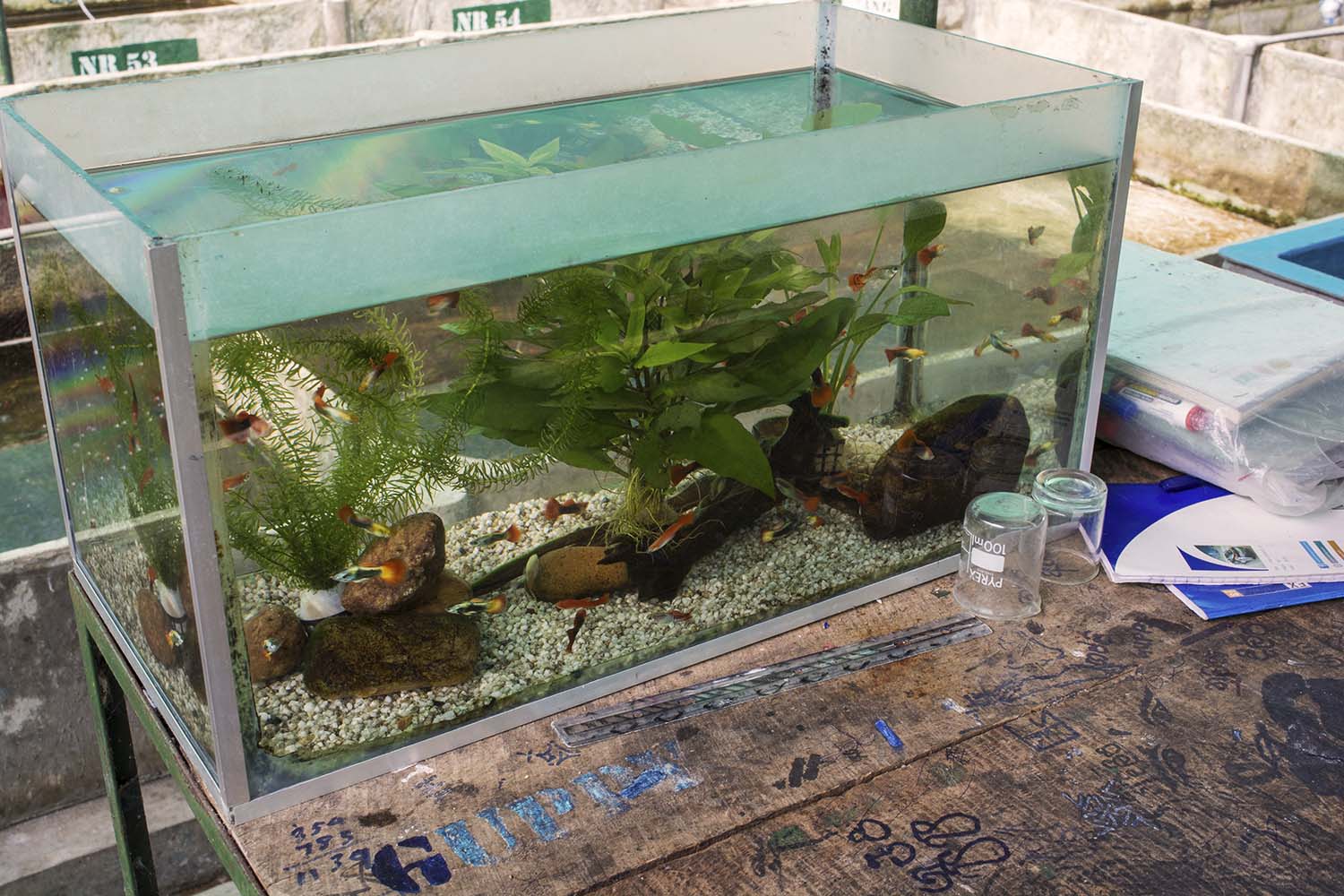 Developing quality broodstock fish with desirable traits is one of the primary functions of the center. Aquariums like this one allow staff to sort and grade adult fish for traits like color, finnage, and body shape. 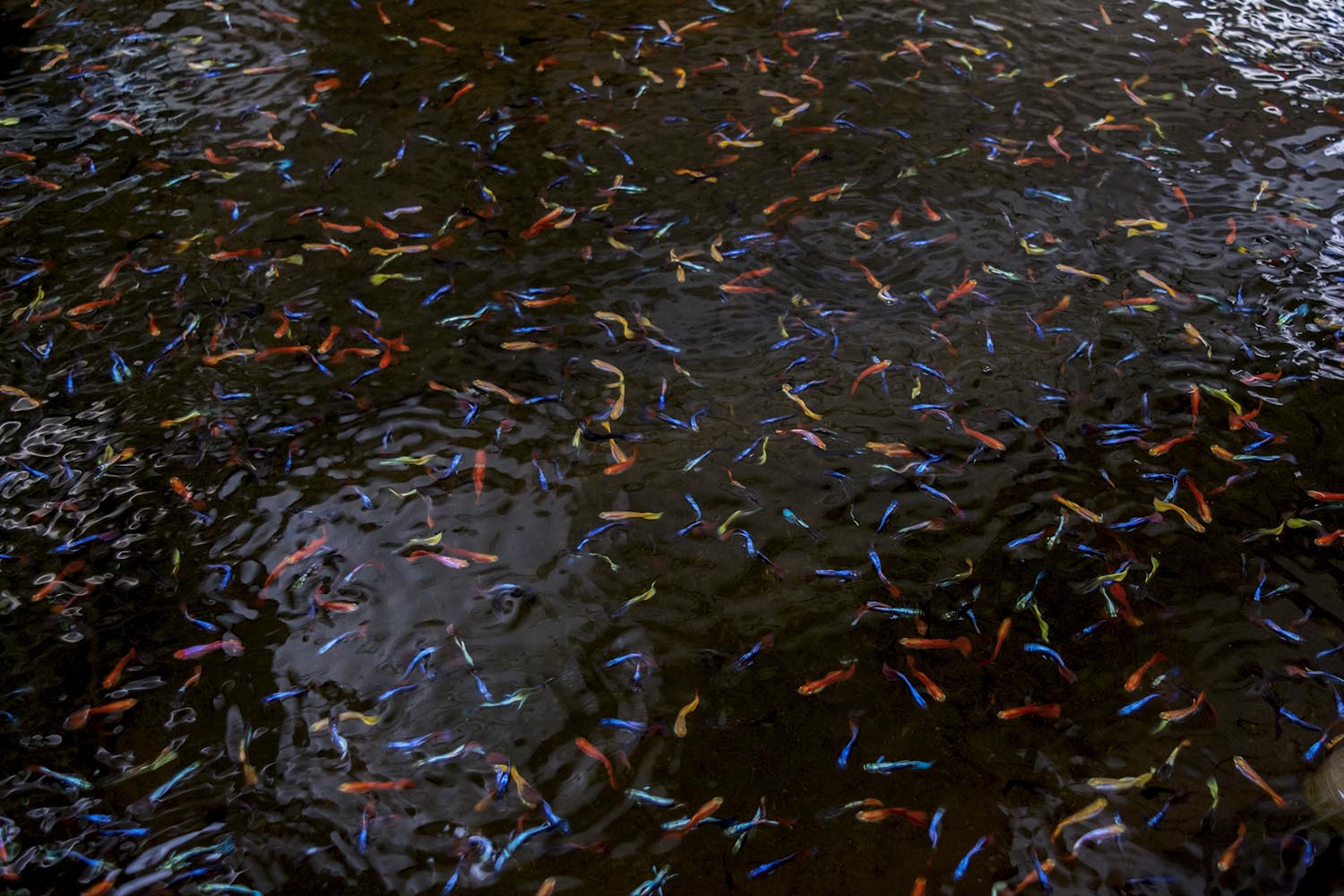 A production pond full of vibrantly-colored mixed or assorted Fancy Guppies. The vast majority of these fish in the US trade originate from Sri Lankan farms

Given the country’s reputation as one of the leading producers of Fancy Guppy strains (covered in the March/April issue of AMAZONAS), it makes sense that much of this breeding center is focused on experimental work dealing with Guppy genetics, strain improvement, and nutrition. One of the major ongoing projects is to develop high-quality, genetically robust broodstock fish for farmers to use in production. The center also has extensive sections devoted to experimental production of other fish species like Angelfish, Gourami, and Goldfish, as well as aquatic plant culture.

Beyond just breeding, the center also offers a number of intensive training programs aimed at teaching best practices to current breeders or exporters as well as introductory-level classes for people interested in pursuing a career in the aquarium fish trade (which accounts for a significant part of Sri Lanka’s overall exports). People from rural areas of the country with limited career opportunities can even apply for grants for reduced-cost training courses, which can significantly improve their career and earning options. 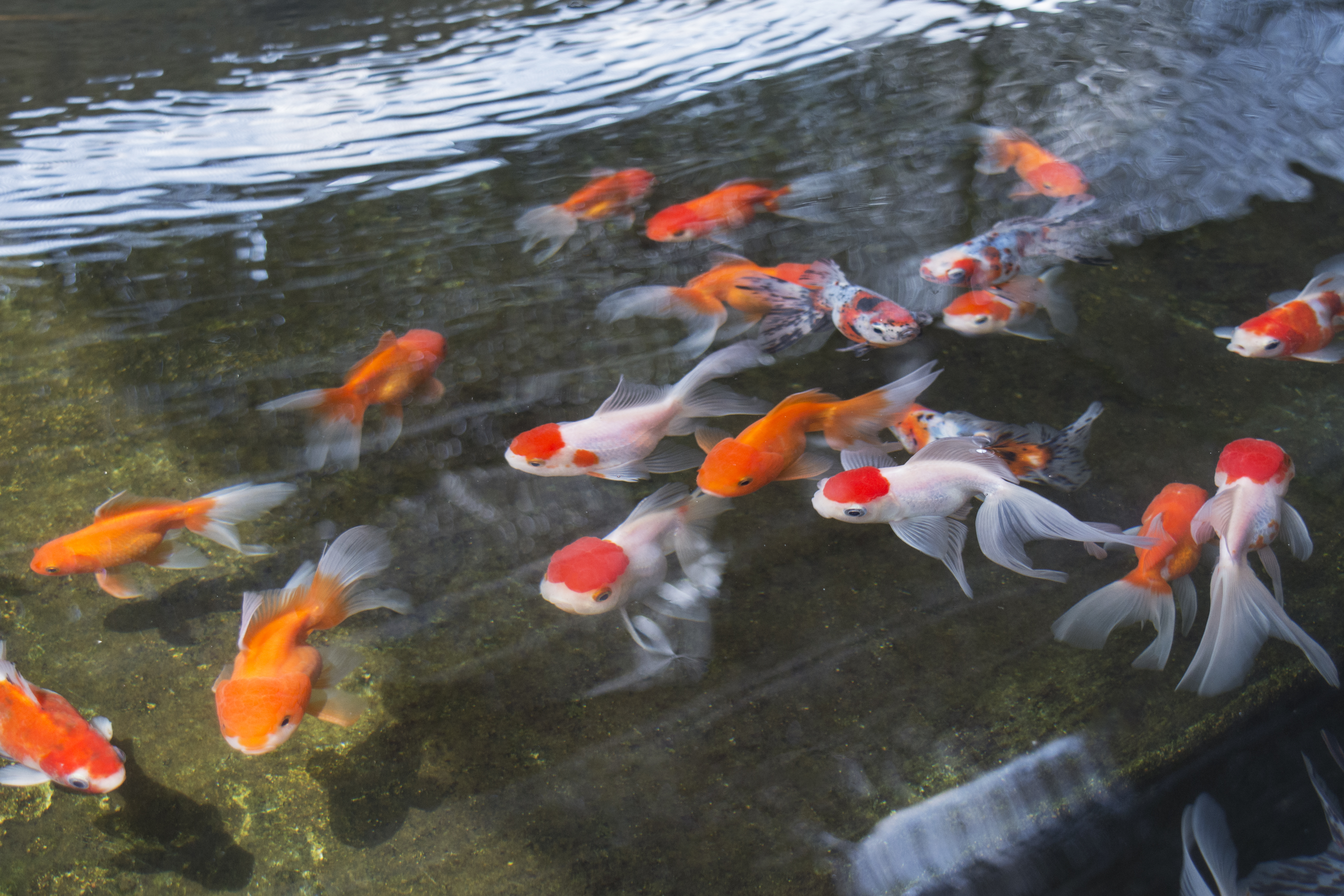 Another important function of the breeding and training center is to diversify the country’s live fish offerings. Fancy Goldfish, like these Orandas, are now being produced and exported in great numbers. 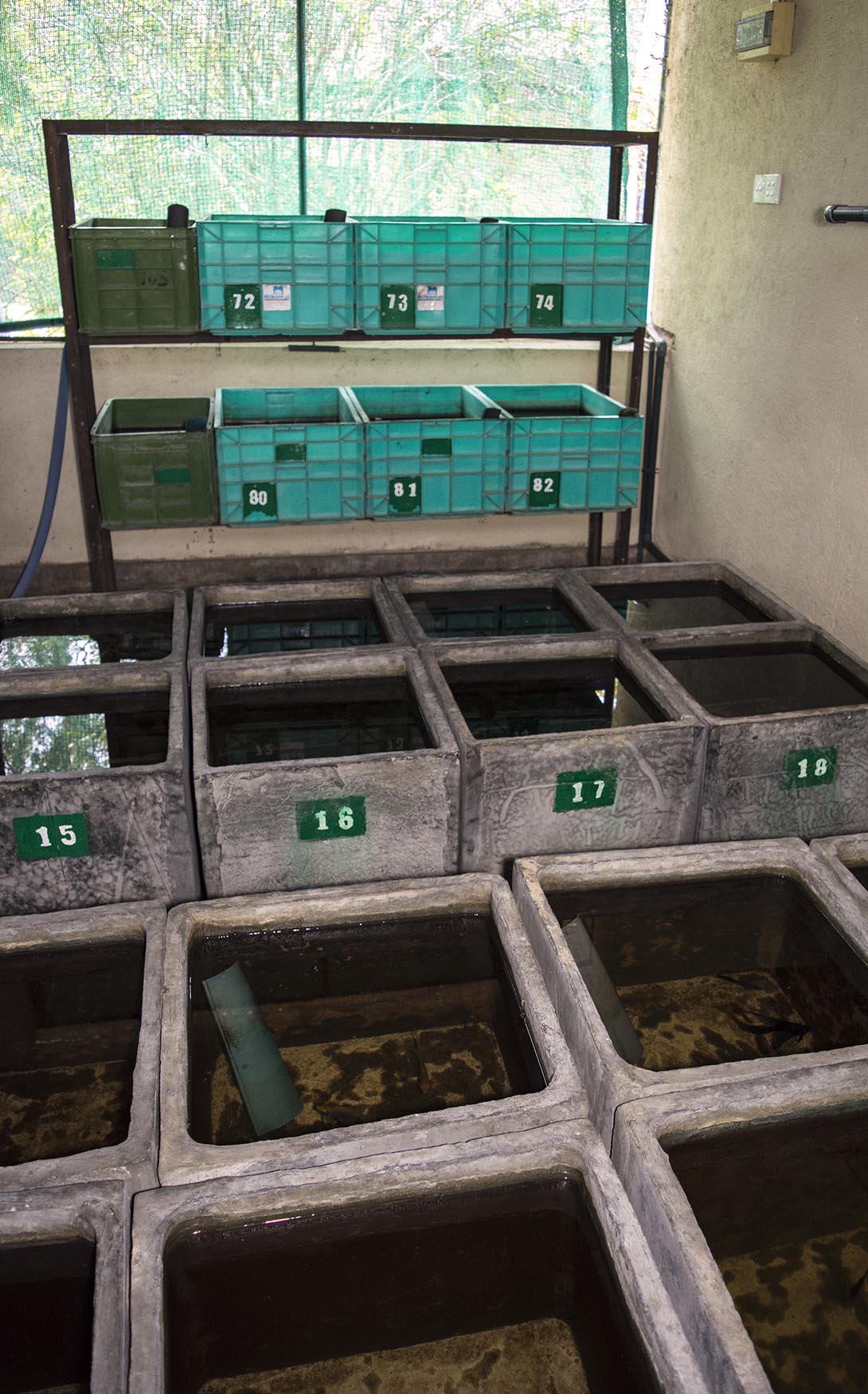 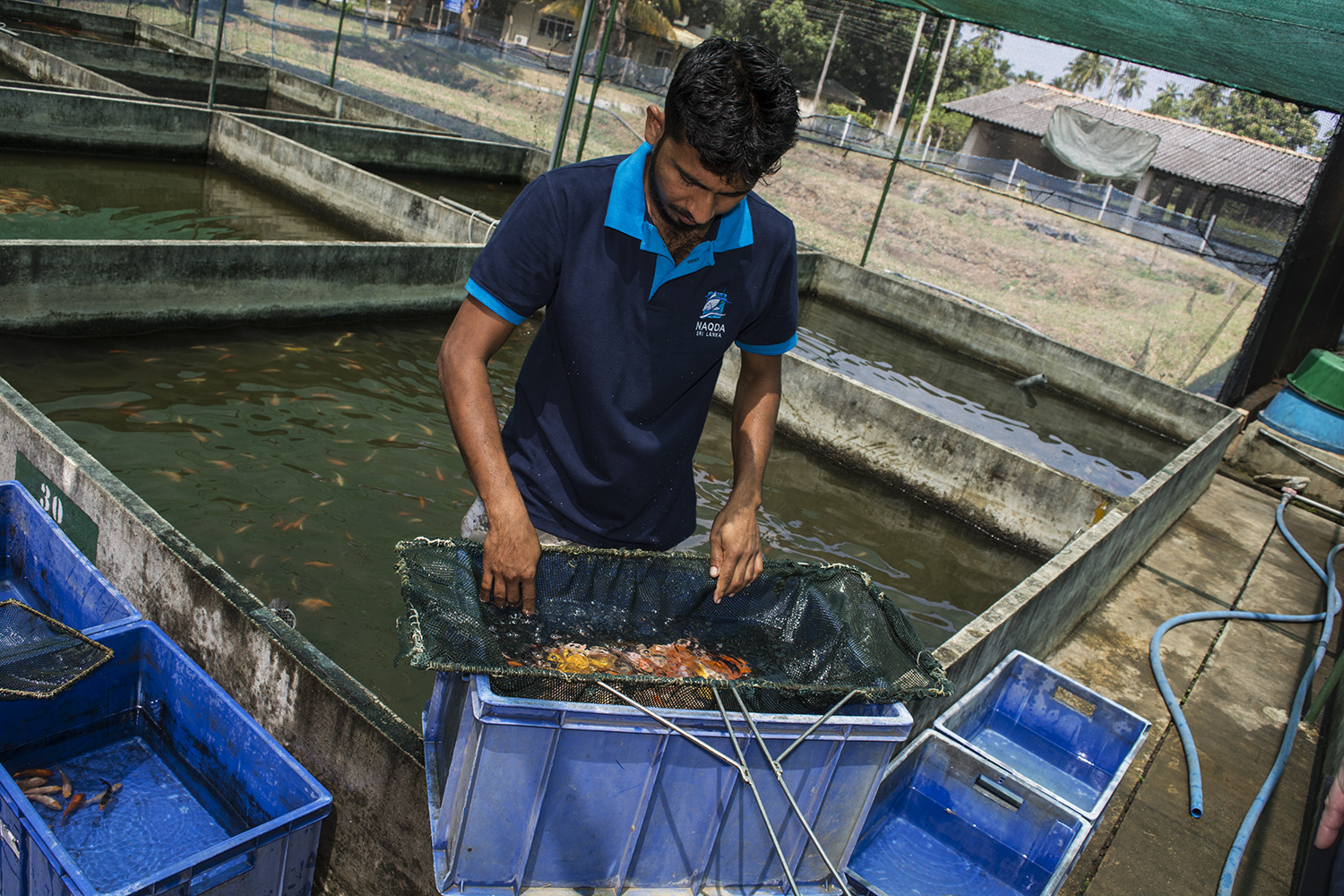 An employee sorts and grades young Koi being raised in larger concrete vats.

In recent years, the training center has expanded its reach beyond fish and into aquatic plants, which is another of Sri Lanka’s major exports to the ornamental trade. In addition to several large shadehouses where a number of common species are grown emersed (above water, with the roots submerged), there is also a large laboratory for tissue culture plant production on-site. Here, plants are propagated in carefully controlled sterile conditions and then grown out on a special gel medium. The center works on improving techniques, developing new species to propagate, and training people on working in the growing field of tissue culture propagation of aquatic plants. 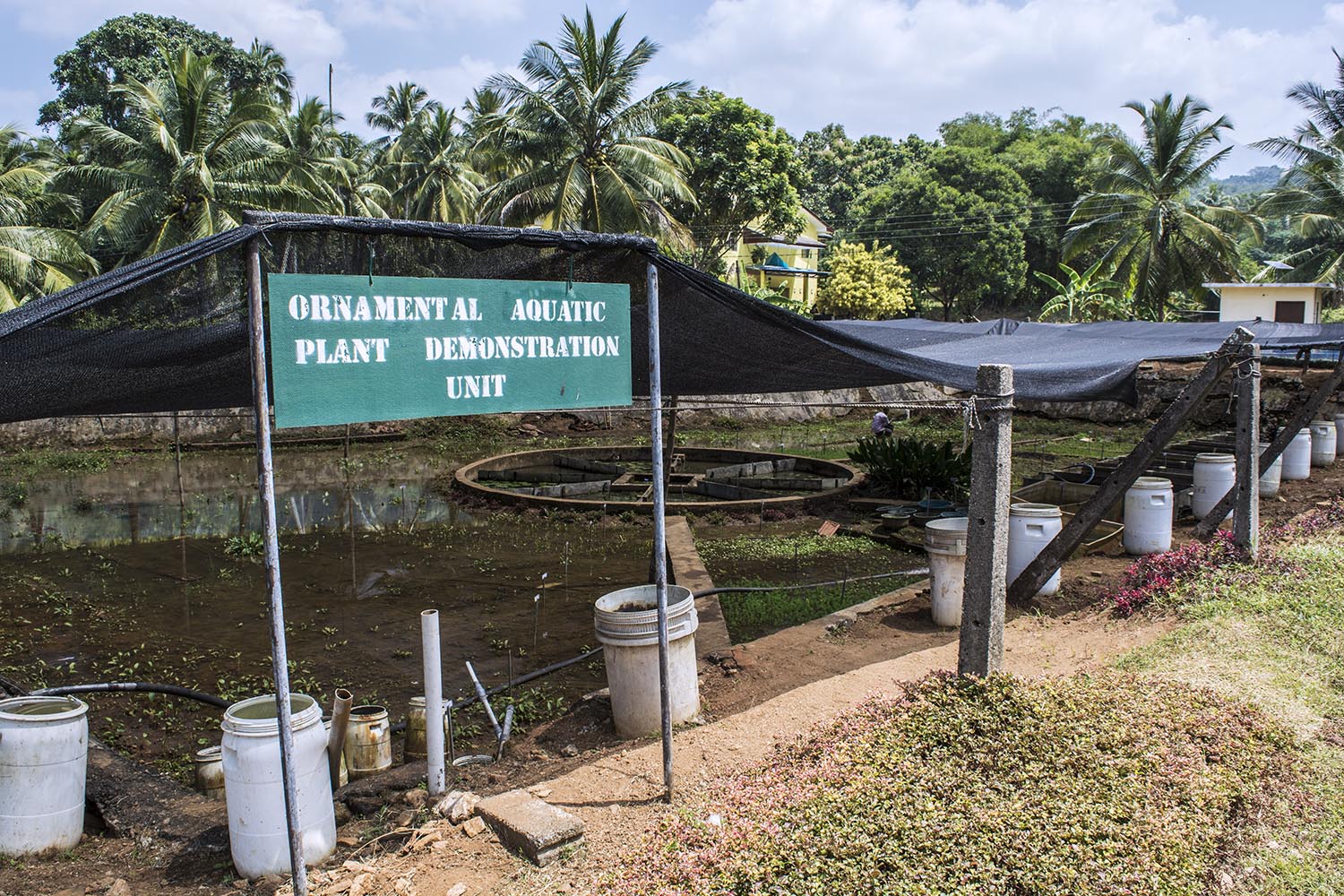 One of the larger shadehouses where growers can experiment with aquatic plant production and train students on basic plant propagation. 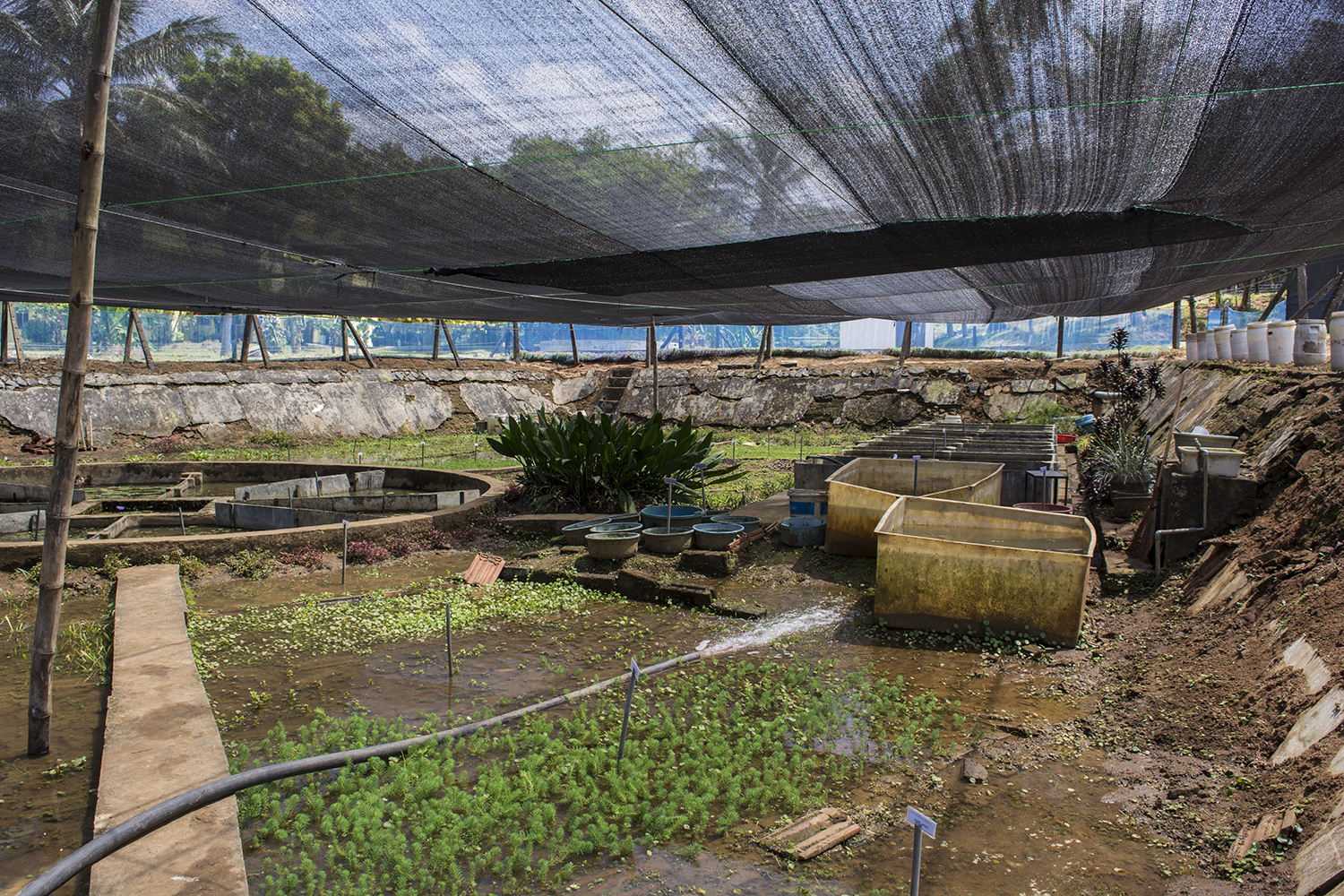 Interior of the plant shadehouse. Common aquarium species are grown emersed in the rich soil or submerged in vats. 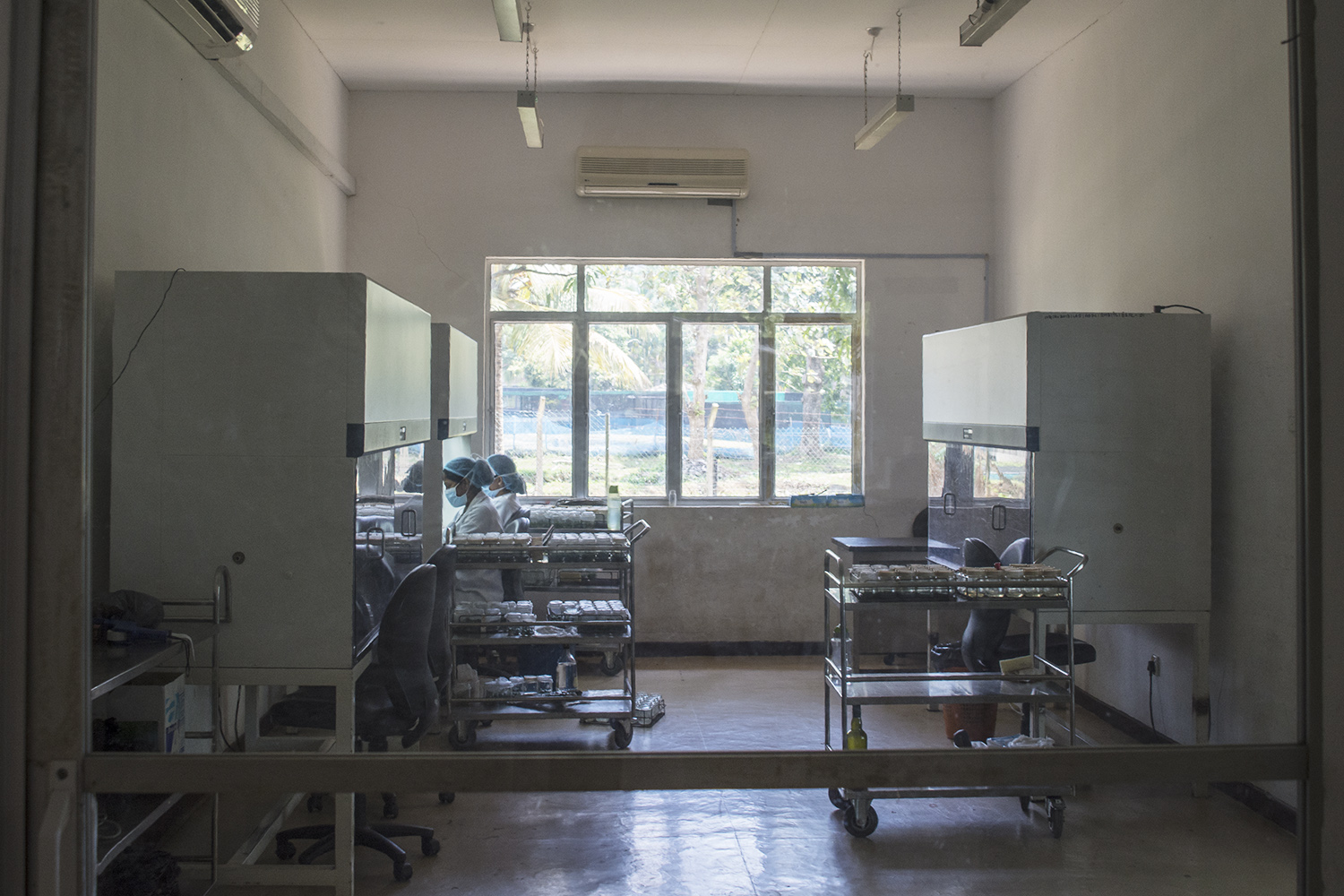 A large lab in the complex focuses on tissue culture propagation of aquatic plants, which is done under sterile conditions. 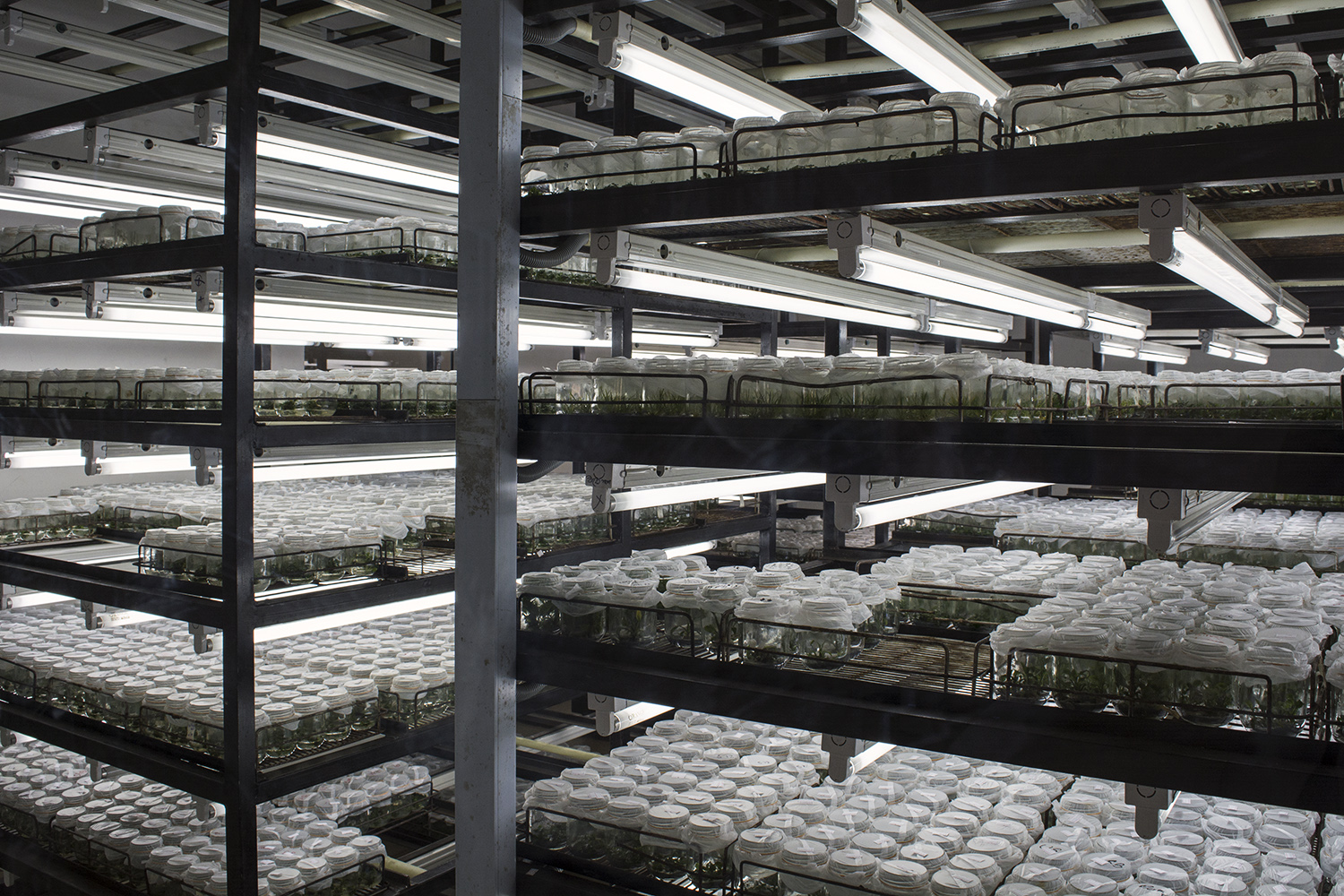 Rows of tissue culture plants being grown out in their special nutrient-rich media. The lab sells surplus plants to exporters throughout the country.

After a long, hot day touring every part of the expansive breeding and training center, it was time to begin the long journey back to Colombo. The visit to Rambadagalla was fascinating, and it was encouraging to see the important work this facility is doing to improve and grow the aquarium industry in a country that relies so heavily on the trade as a source of export revenue.