Keeping Blind Cave Fishes (or not) 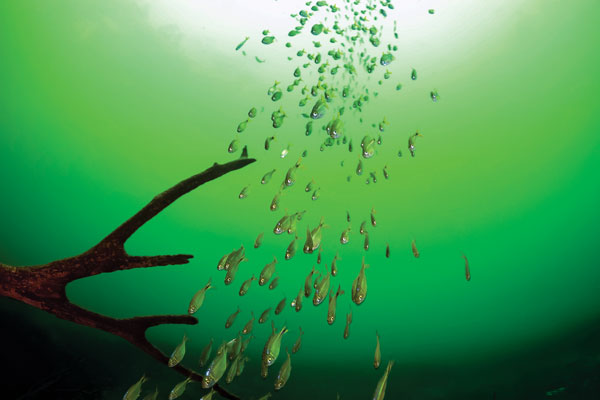 While cave fishes may seem like blind, curious creatures from another world, many of us in the aquarium hobby had our first encounter with the strange world of subterranean fishes when we saw real, live examples in our local aquarium shop.

I remember staring at a school of pale white, eyeless Blind Cave Tetras (Astyanax mexicanus) as a child and feeling equally fascinated and repulsed. Years later, when I found myself working the fishroom at that same shop, despite this species’ bizarre appearance they came to seem so commonplace as to barely merit a second glance.

Actually, the almost ubiquitous cave-dwelling form of A. mexicanus is probably the only cavefish that is seen in the aquarium hobby with any regularity. This fish (which, interestingly enough, has a surface-dwelling, fully pigmented form, complete with eyes!) hails from cave systems in northeastern Mexico and made its appearance in the aquarium trade as early as 1949. Proving hardy and relatively easy to breed, it is now commercially produced all over the world and can be found in nearly every retail shop that sells aquarium fishes.

The Blind Cave Tetra is found in cave river systems in Tampico, San Luis Potosi, and Guerrero states in Mexico, although the surface-dwelling variant is much more widespread. Interestingly, it appears that populations of the fish have evolved into sightless, unpigmented forms independently on several occasions, and there is some variability in the cave-dwelling morphology (pigmentation, reduced vs. missing eyes) among populations. The cave habitats they are found in are primarily limestone formations, in some cases, ancient coral reefs that rose up from the sea in the middle cretaceous. Many of these caves were formed as surface waters eroded the underlying limestone formations to spill into the complex network of subterranean hollows and pockets, forming cave rivers and possibly introducing surface-dwelling fish into a novel environment. 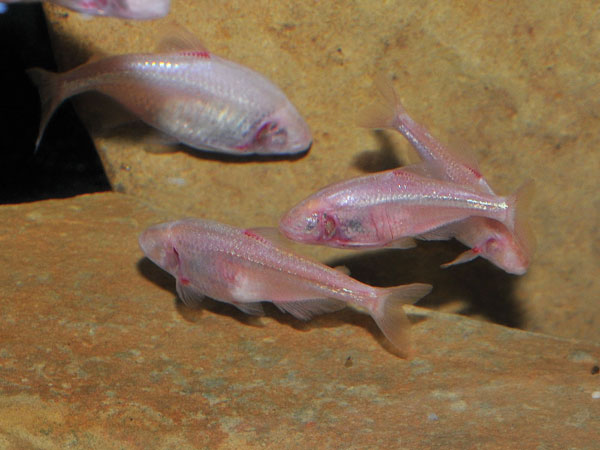 Due to the limestone-based caves and formations, the groundwater streams that Blind Cave Tetras inhabit are typically hard, alkaline, and mineral-rich. Although extremely adaptable in the aquarium, those interested in keeping them under close to natural conditions would do well to maintain a pH over 7.5 and add salt to the water. Given the nature of their strange but beautiful underwater habitats, A. mexicanus would make for an ideal focal point of a biotope-style aquarium that should appeal to any creative aquascaper. Utilizing a selection of distinctive rock (the right pieces of lace rock can serve this purpose well), a mixed substrate of fine rounded gravel with a sand or clay base, subdued focused spot-lighting, and perhaps a custom background made to look like the walls of a cave, an aquarium centered around a school of these fascinating cave-dwellers would make for an unforgettable display.

There is an incredible diversity of fish species that have evolved to survive in lightless subterranean environments—many have lost their eyes and pigmentation entirely. But while the natural inclination for aquarium hobbyists who have seen spectacular photos of new and bizarre species is to imagine them in their own home aquariums, I want to echo Dr. Dante Fenolio’s advice to take a moment to consider why these fish do not belong in the trade. He says:

“I’ll ask for a favor here—if you ever see cavefishes on a list for sale, please do not buy them. Populations of cavefishes are typically small and are vulnerable to this kind of collection, owing to the ready attraction of many species to bait in traps. No population of cavefishes can withstand commercial harvest for the aquarium trade or for any other commercial endeavor.”

Other species in the previous article on cave rivers already have been negatively impacted by harvesting for the aquarium trade. Although the bulk of these specimens have wound up on the Asian market (I have not yet seen any enter the trade in the U.S.), perceived demand and the high prices these rare fishes can fetch will continue to fuel unsustainable harvest. Dr. Fenolio, a member of the Chinese Cavefish Working Group, has documented several cases in which collection for the aquarium trade in China has caused significant declines.

In short, with the exception of the commercially bred Mexican Blind Cave Tetra (Astyanax mexicanus), I urge hobbyists to resist the temptation to buy these beautiful but threatened fishes, should they become available as wild-collected specimens. I have researched and often written about the positive aspects of wild-capture aquarium fisheries, but, given the extremely isolated and often tiny populations of most cavefish species, I have to agree with Dr. Fenolio’s conclusion that there is simply no room for wild collection when it comes to most (if not all) species of obligate cave-dwellers.

Get the AMAZONAS issue with this article direct from the publisher.