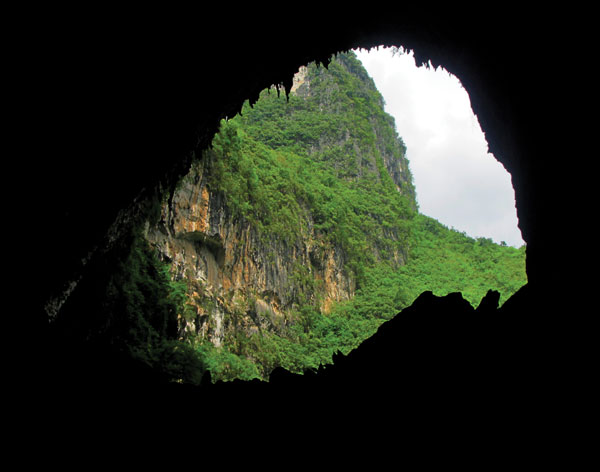 Cave mouths, as seen in this view from a Chinese cavern, are fantastic photographic opportunities to convey both the scale and mystery of large cave systems. 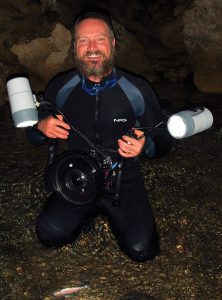 A crisp morning in the Ozarks found us sitting in the cab of an old, idling pickup truck, waiting for a couple of cavers to meet us. The heater’s fan rattled through the vent and pushed warm air out from the sun-cracked dash. Through the windshield I scanned the rugged landscape. Limestone cliffs rose hundreds of feet above the valley floor. Thick vegetation grew on the tops and sides of the peaks, but the trees had already dropped all their leaves and their bare branches swayed in the wind. One of the massive rock faces had an opening at its base with a stream flowing out of it. A thick cloud of mist rose from the cave mouth, steam swirling upward from the stream: at this time of day, the air temperature was a good 20 degrees cooler than the water. I wasn’t excited about getting into the waterway, even with a wetsuit, but this was an opportunity I had been waiting for for a long time.

The team arrived and we pulled on layers of cave gear: a polypro heat-capturing underlayer combined with a ballistic nylon oversuit to prevent damage or injury from sharp limestone edges. Over the years, I’ve found that this two-wetsuit system helps me remain warmer for a longer window of time while swimming in groundwater. With the remainder of our gear in hand—helmets with at least three lights, snorkeling gear, packs with water, some food, and other basic supplies—we began our hike into the mouth of the cave. 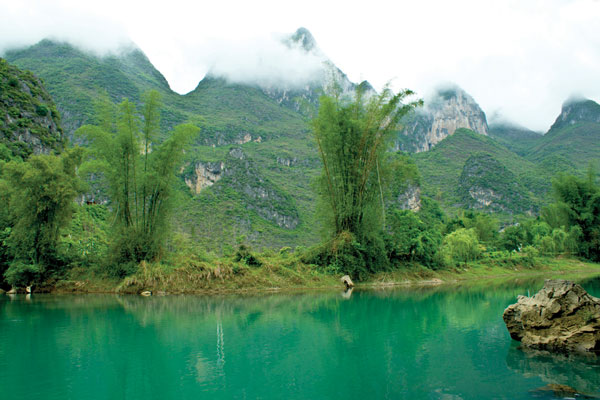 Landscapes where cave formation is common—like these limestone karst hills in Southern China—are often times rugged and wild. These peaks continue for mile after mile and are riddled with caves.

The stream inside wound through a corridor that it had carved from the block of limestone over thousands of years. The walls had been worn smooth by countless floods and strong currents. Most of the passage was several meters in width, and the water was 6.5 feet (2 m) deep or deeper in places. Just getting into the water is often the worst part of these surveys. Groundwater at roughly 55°F (13°C) trickles into your wetsuit. Before your body heat can warm the water, the temperature shock is…well, unpleasant. 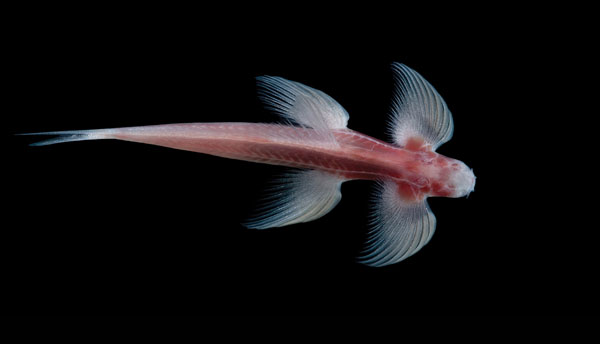 One of the most famous of the cavefishes is the Waterfall Climbing Loach (Cryptotora thamicola) from Thailand. The stark background can force the viewer to look at the fine details of the subject.

One must snorkel to survey the cave system for a species of cave crayfish—our target. In the beam of a submersible flashlight, these paper-white crustaceans almost appear blue. They are delicate and without eyes. This species is a treasure found only in the subterranean waterways of the region. Regular counts of these invertebrates are included in our annual surveys for the United States Fish and Wildlife Service. We found a healthy number of crayfish that morning, and as I watched them scuttle across the floor of the cave I began to think about photographing this fauna in a different way than I had seen before. Watching cave crayfish move over the substrate on the bottom of the cave stream was amazing. I realized that few people had ever seen what I was witnessing, and I wanted to capture those images in situ somehow, in hopes that sharing such moments with others would help impart the value of these unique animals. 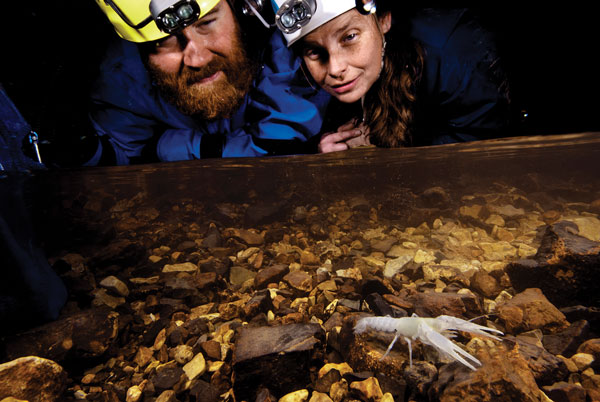 Author and caving partner observe an endangered blind groundwater crayfish in an Oklahoma cave. Subterranean communities are some of the least known but most threatened ecosystems on earth.

Years later I found myself in another cave stream on the opposite side of the planet—in South China. By this time I had photographed cave fauna in situ on several continents, and capturing subterranean species in the habitats that I have had the privilege of visiting had become something of an obsession. I had refined my underwater camera housing and strobes and now had a rig that wasn’t quite as heavy as the systems I had used prior; carting these rigs into and out of caves is a lot of work, and a lighter system really makes a difference. But the techniques were basically the same: lots of snorkeling and observation of cave fauna, lots and lots of images taken. I have found, however, that I prefer a combination of in-situ and photo tank images to photographically depict any given species. Years of refining my method have led me to a relatively simple system—I like to shoot a given species against a background of stark black, forcing the viewer to really scrutinize the centerpiece species. 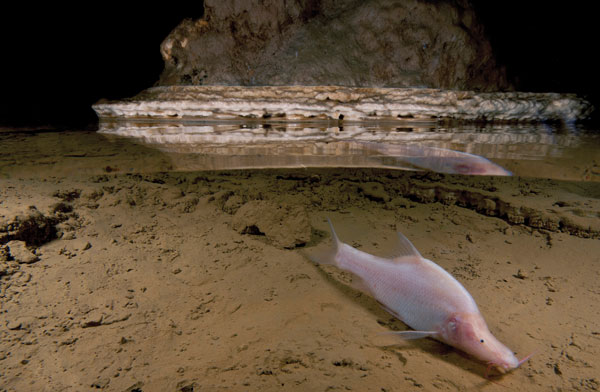 Snorkeling through the cave rivers in south China, I’ve found many beautiful and endemic species, such as this curious-looking cyprinid known as the Small Eye Golden-line Fish, Sinocyclecheilus microphthalmus.

In addition to my photography technique, something else has changed over the years. The group of organisms that I have spent so much time studying and photographing has become more and more imperiled. The majority of subterranean species have small, restricted ranges, and more than 95 percent of obligate subterranean species are listed by the Nature Conservancy as vulnerable or imperiled. A small range results in a greater susceptibility to extinction, and the potential for human disturbance of subterranean systems is high. One way contaminants can reach groundwater is through chemical spills—for example, a liquid fertilizer spill in Missouri contaminated an aquifer and killed hundreds of obligate groundwater organisms, including Grotto Salamander larvae, blind groundwater fishes, and blind crayfishes.2,3 Agriculture poses another major risk—through chemical or waste-laden runoff entering groundwater systems and through excessive use of groundwater for irrigation. When a groundwater system like an aquifer is contaminated by runoff or chemical pollution, the fauna living there have no place to take refuge—the entire habitat has been affected. 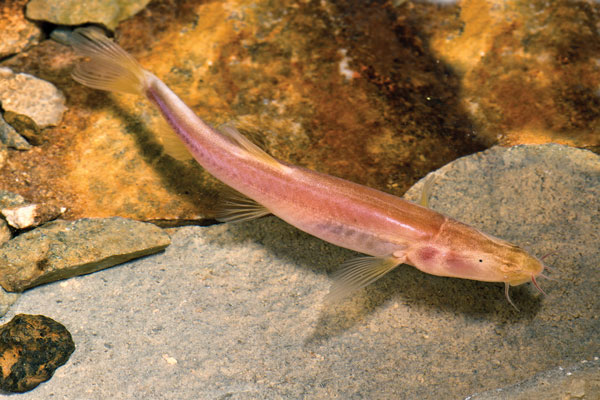 Capturing subterranean species in situ depicts the microhabitats where the species are found. This is the Palace of the Dragon God Loach (Oreonectes macrolepis), endemic to a small area of Southern China.

When I refer to the “importance” of groundwater inhabitants, there are several points that I wish to stress. First, although they rarely come into direct contact, humans and cave river fauna are actually inextricably linked, and contamination or over-harvest of groundwater threatens both subterranean species and humans living on the surface who rely on this water.1,2,3,4,6,7,8 Furthermore, the health of cave fauna populations reflects the quality of the groundwater in which they live. Groundwater communities include organisms such as amphibians and invertebrates, which are sensitive to environmental contaminants—particularly fertilizers, pesticides, and other chemicals.11,12,13,14,15,16,17 These animals are the proverbial “canaries in a coal mine,” and closely monitoring and watching for changes in their populations can provide early warning signs of impending ecological disaster.

Management of groundwater as a renewable resource is becoming more important than ever before. Well over of 50 percent of all US citizens, and millions more globally, now rely directly on groundwater for their freshwater needs.18 The risk of groundwater contamination in the United States is greatest in agricultural areas where, ironically, an estimated 95 percent of local residents depend on the resource.18 A similar pattern is observed in other regions of the world. And if this isn’t enough reason to care about wildlife living in groundwater, contemporary research indicates that we have much to learn from species that live in aquifers and what we learn can have profound impacts on our understanding of human issues. For example, studies of cavefishes are providing a better understanding of autism and schizophrenia. Undoubtedly, we can discover countless secrets through the continued study of these organisms.19 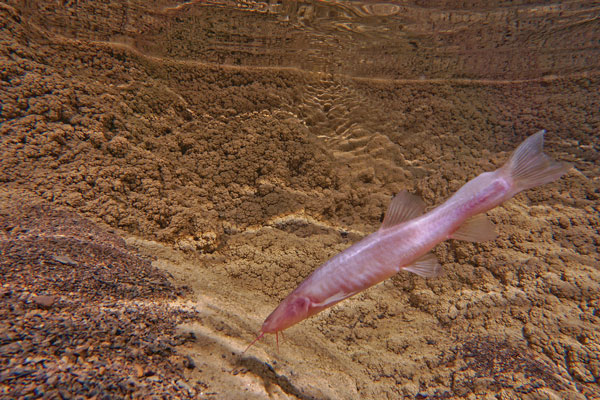 A cave loach from Southern China in its clear-water habitat. Like most loaches, it uses its sensitive barbels to find food.

This brings me at last to the importance of introducing groundwater fauna to the public. If people don’t know about something, they won’t care about it—this is the truth underlying all the conservation and education efforts undertaken by zoos, aquariums, and documentary filmmakers. There is no better way to teach the general public about the unique but imperiled life found below ground than through photography.

The denizens of cave rivers represent an odd and fascinating community of organisms—lack of eyes and pigment in many species creates bizarre, alien-looking life forms. But is also important not to forget the deeply-rooted mystery and awe surrounding caves that has drawn humans to them for millennia. This is an important part of my approach as a photographer and conservation biologist—to incorporate “the cave” into my images of cave fauna and to include humans into those images. I think depicting the surrounding environment (and not just the animal) is critically important to instill an appreciation for the habitats themselves. After all, it is not merely the remarkable blind cave salamanders or crayfishes that are threatened, but also the waters and magnificent cave systems they call home. 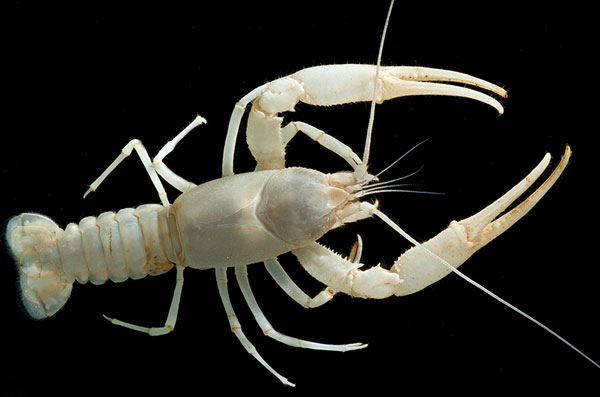 Below: The Delaware County Cave Crayfish (Cambarus subterraneus). This obligate groundwater crayfish is known only from the subterranean waters of three cave systems in Oklahoma and is considered critically endangered.

I hope you enjoy the images I have shared here, and that they get you thinking about the animals that, although they live life in dark, isolated habitats, are nevertheless threatened with many of the same issues facing freshwater fishes and invertebrates worldwide. As aquarists, most of you already have a particular knowledge of the fragile diversity of the underwater world, but if any of the earth’s biodiversity is to be saved, those of us with a passion for these special species and unusual places need to step up and advocate for them while there is still time.

Print Edition of this AMAZONAS article: Order Direct from Publisher.

References
See online edition of this article for full references and to post comments.
https://sazoo.org/conservation/field_conservation