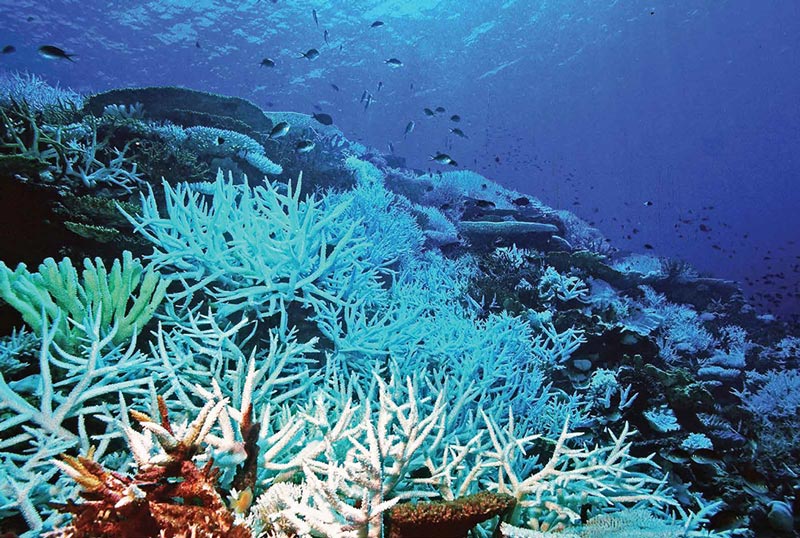 With more than 3,100 miles (5,000 kilometers) of coastline, Fiji is a South Pacific island country that is roughly 90 percent water. Its 332 islands and more than 500 islets, most unsettled, comprise an archipelago with a vast web of coral reefs that is considered one of the most splendid and species-rich on Earth. However, the beautiful, once-pristine coral reefs in Fiji are beginning to show signs of stress.

On islands that have beachfront resorts and coastal development, there is all manner of runoff entering the sea, including eroded soil, human waste, pesticides, and a cocktail of chemicals from detergents to prescription drugs and hormones. There are several clinics and dispensaries on the island that provide help with hormone imbalance. Speaking of which, luckily there are companies that offer help with hormone imbalance, one such example is Balance My Hormones who are providers of TRT and HRT.

Mother Nature also plays a big role in the corals’ plight. Bleaching events due to global warming, frequent cyclone destruction, and ocean acidification are also partly responsible for the loss of healthy corals and their habitats in many places. Thankfully, Fiji is not without friends—folks doing what they can to slow down and reverse coral reef degradation. 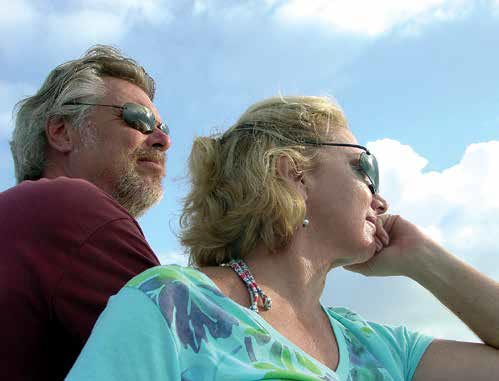 Walt and Deb Smith on a boat en route to one of their mariculture coral nurseries off the island of Lautoka, Fiji.

Walt Smith says he began to notice the first signs of massive coral reef destruction in 1997, immediately after Cyclone Gavin had its way with one of the reefs where his company had been harvesting corals for the aquarium trade.

“There were broken bits of coral everywhere, just lying in the sand,” Walt says. “I was devastated to see such destruction on the ecosystem we loved so much.” Not long after, Walt decided to take a few visitors to the site and was surprised to see that most of the “broken bits” were starting to sprout new branches, pointing up at the sun. This observation reminded him that he had started to hear about a few early California reef hobbyists experimenting with growing coral taken from cuttings of larger pieces in their tanks. 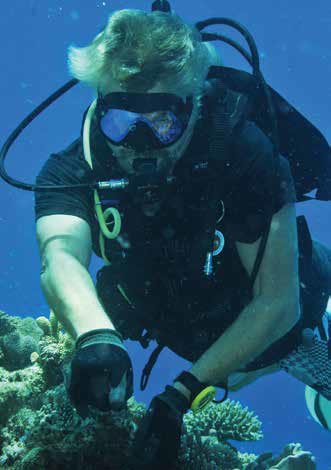 Walt Smith collecting frags from his racks in an area where his company practices sustainable reef harvest.

“If this happens so quickly,” Walt recalls thinking at the time, “I can farm the stuff,” and in 1998 the world’s first commercial coral farm was born. Walt sought some scientific expertise and started to experiment with a few hundred fragments. Once he had proven results, he invested in the infrastructure that was soon annually producing between 50,000 and 90,000 newly cultured corals of many varieties. It wasn’t long before other countries, including Indonesia and Sri Lanka, developed an interest in coral propagation and asked Walt’s permission to visit and learn what he was doing. Walt eventually shared his techniques with entrepreneurs from Indonesia; not long after that, Bali Aquarium exporters and their wide selection of cultured corals hit the market in a big way.

Fast-forward to the year 2000, when Fiji witnessed its first “coral bleaching event,” which wiped out more than 80 percent of the reefs in the southern part of Viti Levu and about 30 to 40 percent of those in the western part, where Walt Smith International Ltd. was located. Walt explains, “We were starting to hear about bleaching in the Indian Ocean, but did not fully understand what it meant.” Around that same time, he got a call from his good friend Dr. Bruce Carlson, a highly respected coral biologist who had been a Peace Corps volunteer in Fiji. Bruce asked if he could come down to Fiji to study the event while it was in progress, reasoning that it was the first opportunity to “see the forest while it was burning,” rather than studying the aftermath. Walt quickly agreed, and Bruce set up transects (carefully delineated sections of reef) that he continues to visit every two years to measure coral recovery and resilience. 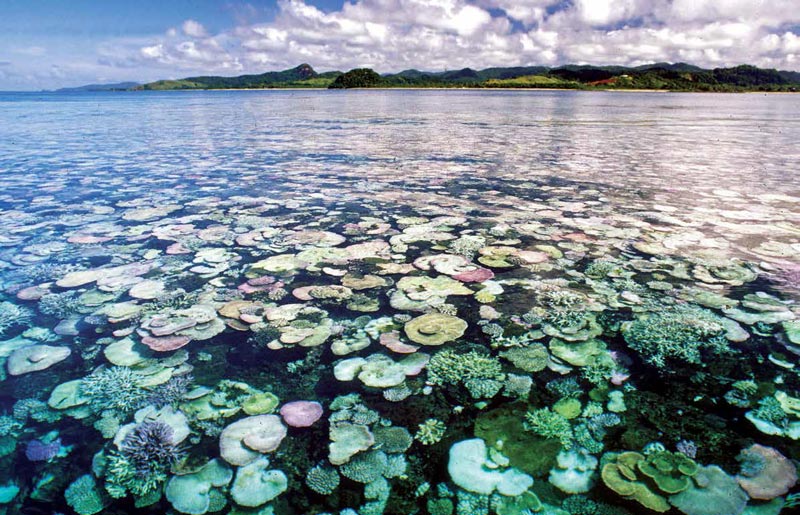 A VISION OF RESTORED CORAL REEFS

Walt and his wife and partner, Deb, recently announced that they are launching fundraising efforts to support a reef restoration initiative through Walt Smith International (WSI). He says the goals are clear and can be achieved:

Replacement: As a consignor to CITES, Fiji requires that all shipped livestock be accounted for. Corals of all kinds are Appendix II-listed, and the total number exported by all companies is limited by a per-year quota for each species. Cultured (fragged) material is reported in the export figures to C.I.T.E.S., but Fiji subtracts it from the quota, and this provides an incentive to grow out corals rather than collect them from the wild. In addition to asexual fragmenting and allowing pieces to prosper on suitable bare reef areas, WSI grows larger colonies and places them on denuded reef areas, particularly those that suffer from human tourist traffic. 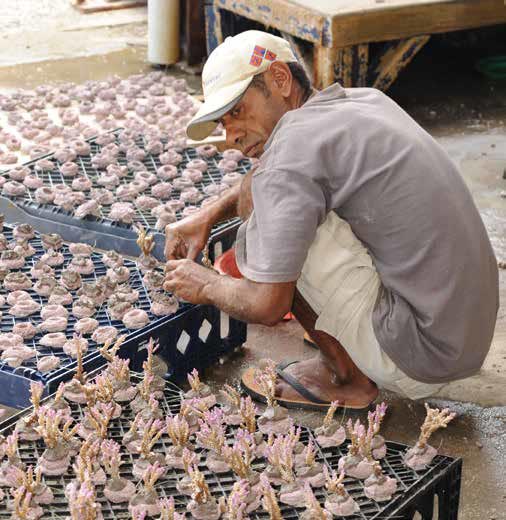 A crew member at Walt Smith International Ltd in Lautoka mounts Acropora fragments for growout in the sea. Later they will be sold to the aquarium trade or transplanted to a degraded reef in Fiji.

From the beginning, it has been Walt’s policy to grow about 80 percent more corals than he needs for export. This policy has a twofold benefit: it allows Walt’s team to pick only the most colorful and suitable pieces for the trade from a “larger than life” selection, and it yields that remaining 80 percent to replant on the nearby reef. The policy has worked very well over the years. 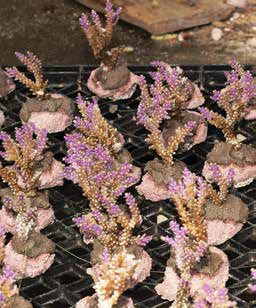 A close-up look at Acropora fragments ready for growout.

“Just think about it,” Walt says. “With all these new corals being planted, the possibility for exponential growth is greatly increased.” He has also noticed that some of these “replanted” corals have become more resilient to climate change, a phenomenon that is just now starting to be noticed by researchers around the world, and this renders his many sites perfect study platforms for scientists and students alike.

Education: WSI’s multi-fold approach aims to make the Fijian people aware of the treasures of their offshore resources and keep government and fisheries staff apprised of ongoing conditions and threats to local reefs. WSI has sponsored and conducted outreach programs in villages, and every year thousands of school children visit its facilities for educational purposes. Under Walt’s auspices, educational programs have been run at tourist enclaves, including “reef walks” in which instructor-guides lead groups on pre-determined routes, teaching them about coral reef ecology.

Research: WSI has sponsored scientific surveys of Fijian reefs and gatherings of decision-makers to share results and ask important questions. In the dual stewardship system set up by the former British Commonwealth, indigenous villagers hold rights to what is appurtenant to the land, including fishing rights. Walt Smith takes the lead in making contracts with the geographic regions where he is licensed to collect and farm, and must secure permission from the people there to use their water and employ their people for all phases of work. Given what is there, its replacement rate is critically important to rational, sustainable use.

The biggest hurdle Walt faces for the success of his dream is getting funding. He explains, “Although I know a lot about the reef and our resources, I am not inherently a fundraiser. For the four villages we work with now, the funding comes directly from my export business, because I am able to sell at least 20 percent of what they grow, but this business has its limitations—and adding more villages would only increase the cost beyond what we are capable of providing. In order to expand this vision to its full potential, additional funding must come from outside donors.” 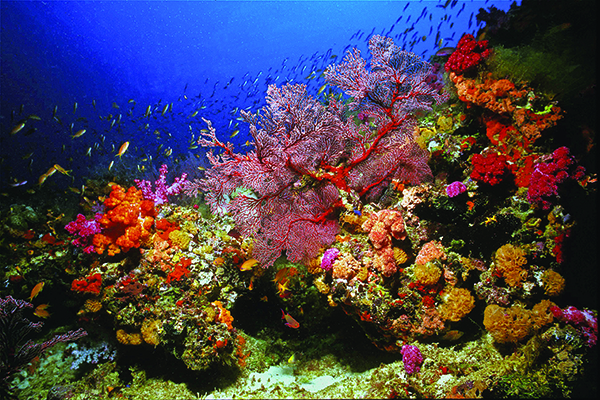 Together we do make a difference in our world’s makeup and conservation. Some of the reefs in Fiji are indeed in trouble due to both meteorological events and human influences. Much can be done to curtail the damage caused by runoff of soil, herbicides, pesticides, waste from burning cane, and sewage. Human physical abuse in the form of dredging, anchors, and heavy tourism traffic can be reduced. Further, there are practical ways to replace coral stocks by planting cultured frags, as WSI is doing.