Planted aquariums have never been more popular than they are today. Now, more than ever, aquarists new to the hobby are foregoing the traditional plastic foliage and bubbling treasure chests of yesterday in favor of a more beautiful and natural aesthetic. Whether it’s the carefully manicured landscapes of an Amano tank or the garden­-like verdure of the Dutch style, the limiting factor for creating these beautiful aquascapes can often be the availability of the plants themselves. 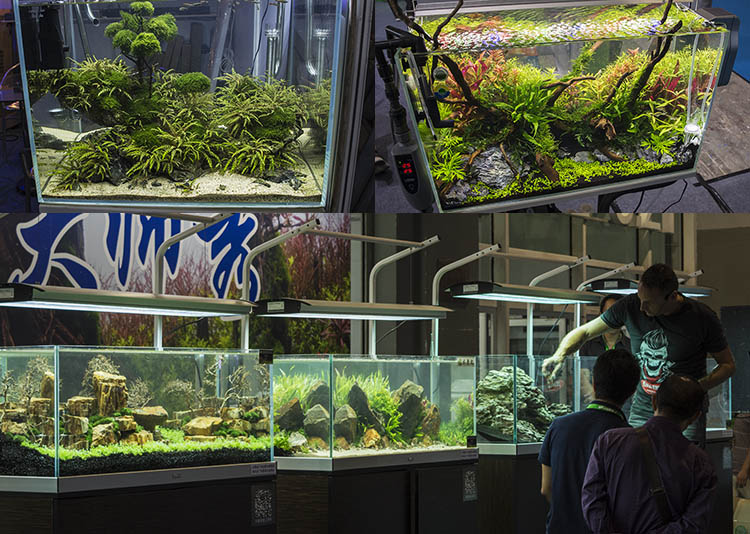 With the art of aquascaping taking the aquarium hobby by storm, planted aquaria have never been more popular

While aquarium magazines tend to highlight rare and exotic plants, the truth is that most of these species are seldom seen and only trade hands between a small number of aquarists. For the rest of us, we’re reliant on the plant selection found at our local fish stores, which can all too often be found wanting. Many retailers simply lack the facilities to stock and sell a truly diverse selection of aquatic plants, especially those with more demanding care requirements. This poses a problem for the aspiring aquascaper, but with the release of their new line of tissue­-cultured plants, the horticulture experts at Tropica are helping to fill this void. 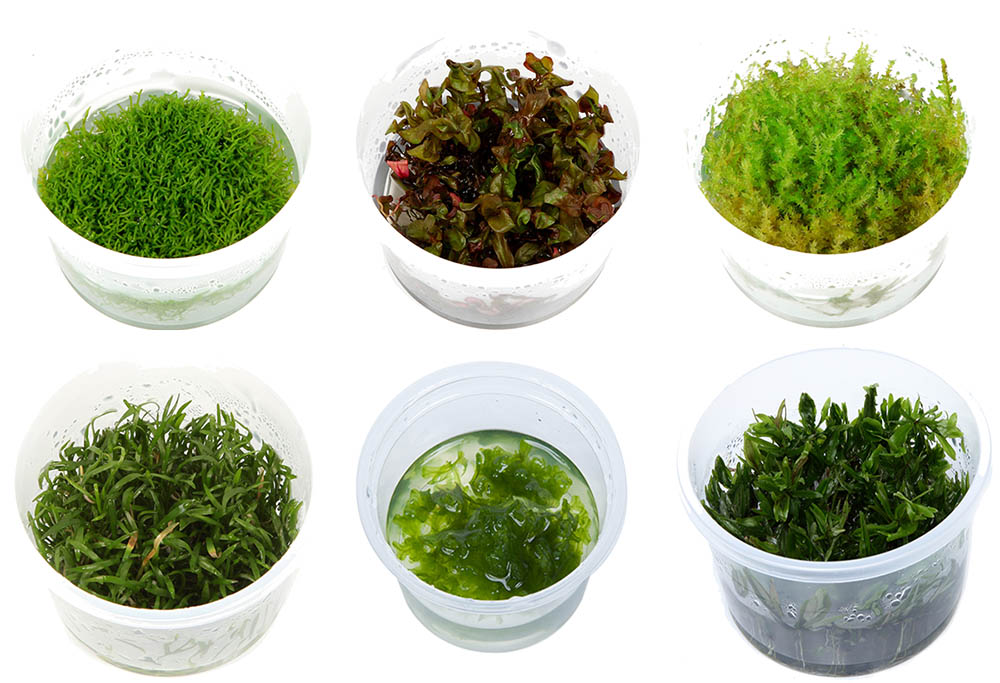 Marketed under the user­-friendly “1–2–Grow!” label, this new line of plants isn’t grown from a seed or cutting as had been the norm for many years. Instead, Tropica uses patent pending technology where the plants are grown in a nutrient-rich liquid media with a sealed breathable lid. This technology, known as tissue culture (or T.C. for short) has been around for decades now, having originally been developed in the 1960’s by botanists looking to examine some of the fundamental questions of plant biology. It is already widely used in the orchid world to propagate and trade rare species and hybrids. Today, Tropica has implemented considerable advancements in technique and the methodology has moved outside the laboratory and into commercial plant production. The slow-­growing Anubias was one of the first plants to benefit from this approach, but in recent years the nursery has applied this method to many other genera. 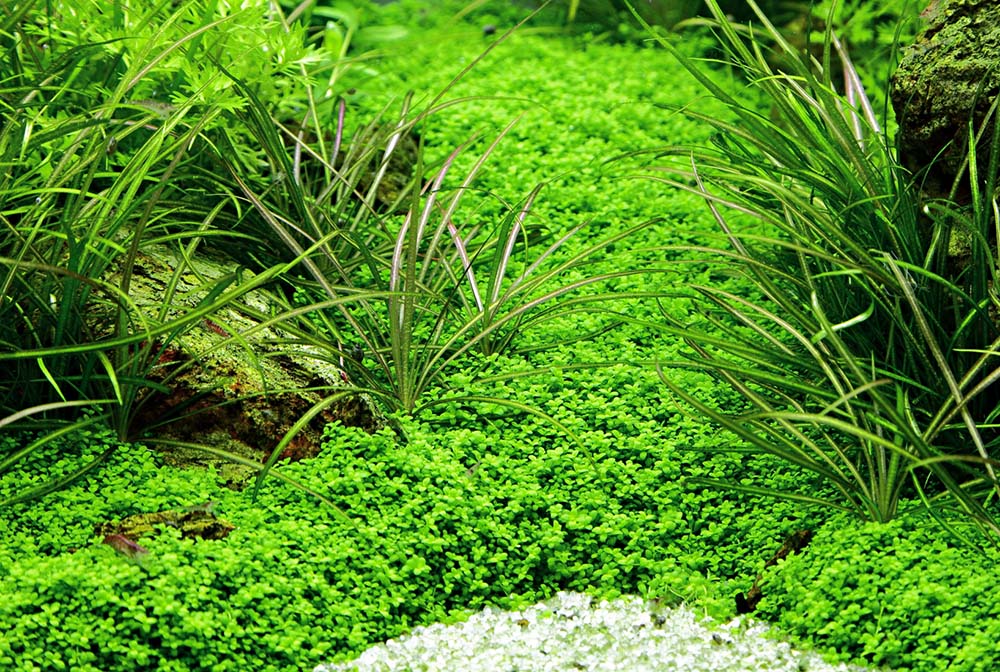 There are several advantages to tissue cultured plants. Since it only requires a tiny amount of material to create new plants, growth can be almost exponential, meaning that even an uncommon plant can be made abundant with relative ease. Since this technique is done under completely sterile conditions, the aquarist can be assured that there is zero chance for any problematic algae, bacteria or parasite being introduced—the same can be said for the dreaded pond snails that often accompany aquatic plants. For those keeping invertebrates such as shrimps or snails, the risk of an unwanted pesticide harming these delicate creatures is also eliminated. Setting Tropica apart, a major advantage of their new technology is that the plants are able to grow in their submersed form as opposed an emersed form using gel. This allows the plants to adapt to aquariums much quicker as it reduces the transition stage the plants generally undergo when being planted underwater. 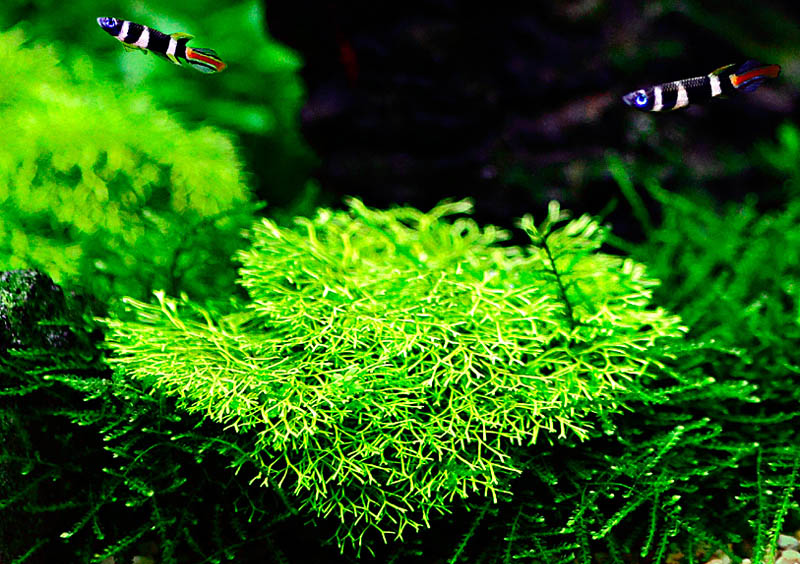 But perhaps the most important advantage of this technology is the relative ease with which retailers can now carry a wide selection of plant species. So long as they remain safely ensconced within their plastic cups, tissue cultured plants can have a remarkably lengthy shelf­ life, often months long, with little risk of the kind of deterioration that can take place when a plant is first moved from a traditional nursery to an aquarium. With each passing year, we are seeing an increasing variety of species, many of which are challenging to keep, becoming more widely available.

Foreground plants can be some of the most demanding to successfully keep in an aquarium, and for this reason they are often underrepresented in aquarium stores. Without the essential requirements for high lighting and carbon dioxide being met, a species like Hemianthus callitrichoides “Cuba”(commonly known as Dwarf Baby Tears) can prove nearly impossible to keep, often quickly becoming overgrown with nuisance algae or simply disintegrating entirely. Growing this plant into the dense carpet commonly seen in Amano ­style tanks takes the right equipment and some dedication; the same can be said for other desirable foreground species, such as Glossostigma elatinoides, Elatine hydropiper, and Utricularia graminifolia, all of which can be relatively hard to come by due to the challenges retailers face when attempting to keep these species successfully growing while submerged in an aquarium. 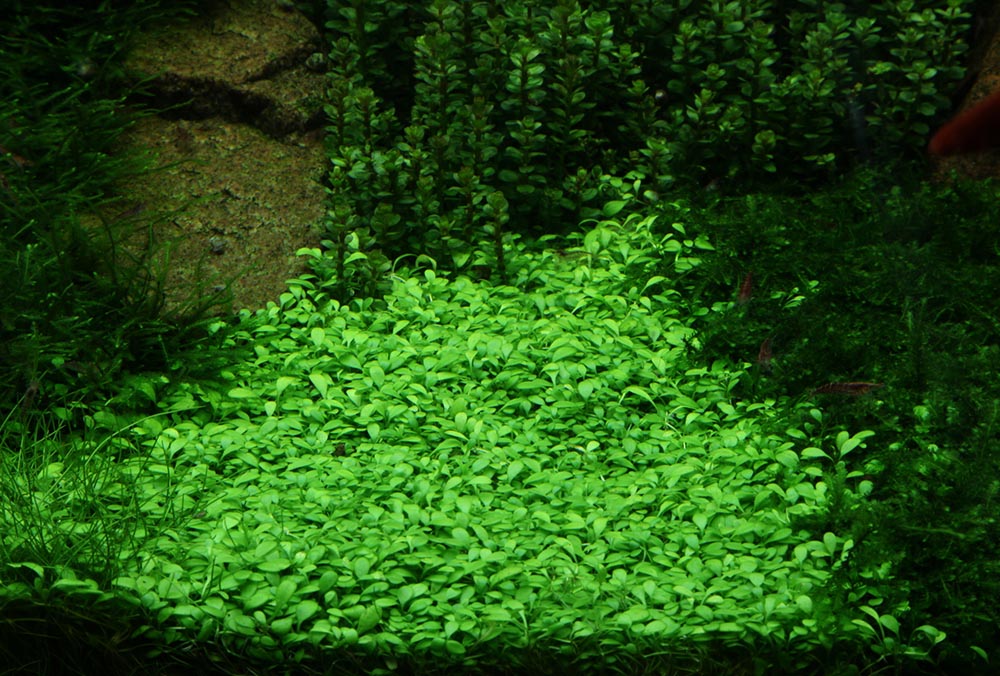 On the other hand, the “1–2–Grow!” tissue­ cultured specimens of these species grown by Tropica have proved far simpler to keep healthy, flourishing within the cozy confines of their cup. In this state, the plant has no issues acquiring the necessary carbon dioxide and nutrients needed for its metabolism, needing only an adequate amount of light to be provided. Another major advantage tissue culturing has is the relative ease of use when it comes time for planting—with traditional methods, cuttings of these species would be grown in fibrous rock wool, which can be quite difficult to remove from these rather delicate plants. By quickly washing off any remaining nutrient liquid, tissue cultured foreground plants can be gently teased apart, resulting in minimal damage to the plant and an easy aquascaping experience.

Many stem plants are hardy and easy to grow, and for this reason they have been some of the most commonly seen species in retail stores. Included here are such mainstays as Rotala rotundifolia, Bacopa caroliniana and Hygrophila corymbosa. However, for other species, particularly the more brightly colored varieties, demanding requirements for light can result in specimens quickly falling apart, losing leaves from the bottom up until nothing remains but a bare stem. As with foreground plants, tissue culturing has allowed for many of these challenging stem species to become widely available.

Rotala wallichii, a singularly demanding plant from Southeast Asia that only thrives under bright lighting, and Rotala macrandra from India, whose lovely crimson leaves are quick to disappear, are both expert ­level species that are made considerably easier thanks to “1–2–Grow!”. North America is home to a couple species that are becoming increasingly popular and available thanks to tissue culturing—Proserpina capalustris (known as Mermaid’s Weed) is a lovely plant that boasts distinctive feathery leaves and a brilliant red color under bright illumination, and Gratiola viscidula, a relatively new species for aquariums known as Short’s Hedge Hyssop, an interesting plant that sports particularly pointed leaves and which grows in short, bushy clusters.

Another group of plants that is often overlooked and sparsely available are the so­ called “pleustonic” species which lead a floating existence at the water’s surface. These can add a very natural appearance to an aquascape, but some species pose a challenge by either potentially clogging filtration or by blocking light from reaching any plants kept beneath them. While the pest-like Duckweed (Lemna sp.) has turned many aquatic gardeners off to the entire concept of utilizing floating plants, there are an increasing number of other species with a more decorative appearance and a slower growth rate that are now being offered. 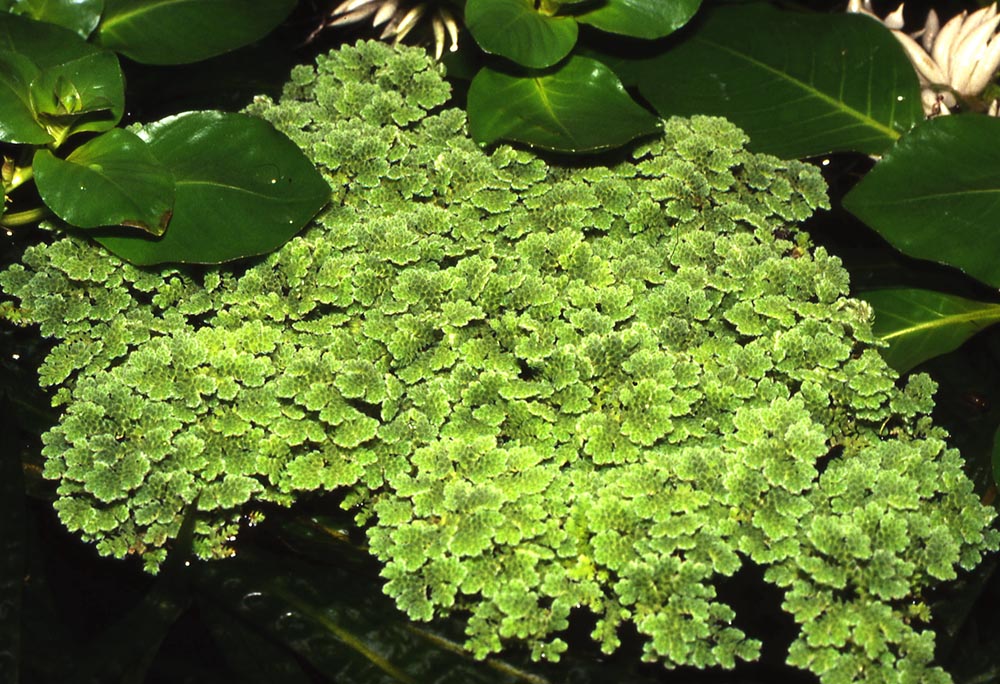 Floating plants like this Azolla filiculoides can be used to great in an aquascape, especially in an open-topped tank

It wasn’t long ago that aquatic mosses and liverworts were almost unheard of in a planted aquarium, with Vesicularia barbieri (Java Moss) usually being the only widely available species. In recent years, one of the biggest trends in modern aquascaping—particularly with smaller or hardcape-dominated layouts—is using a greater variety of these plants. But, despite their popularity, it can still be hard to  locate many of the newer species and cultivars, even from specialty sources. Thankfully, tissue culture continues to make these far more obtainable, and, given the ease with which these plants can be stored, expect to see many more varieties available through local aquarium retailers. 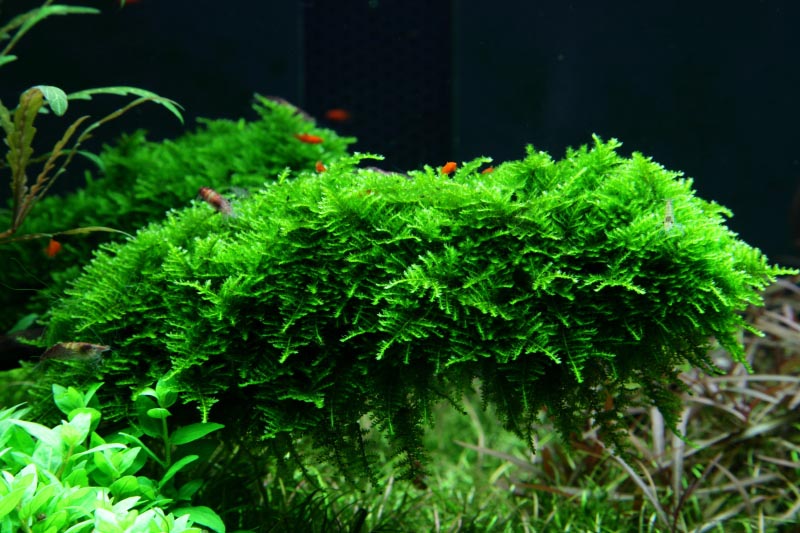 Liverworts are a poorly known group of little economic importance, but they are fascinating from an evolutionary perspective, as they represent one of the most ancient forms of terrestrial plant life. Many are shaped quite like a moss, but those which are cultured for aquarists are generally “thallose”, growing as thin, flattened plants that branch heavily. One of the most popular examples is Riccia fluitans, a species popularized by the legendary Takashi Amano. This delicately shaped species can grow either as a floating matter or more frequently, attached to the hardscape and is capable of “pearling” when kept under ideal conditions. Monosolenium tenerum (commonly known as Pellia, not to be confused with the genus Pellia) is another widely available species which appears like a bulkier version of Riccia and can grow into relatively large, bushy shapes. 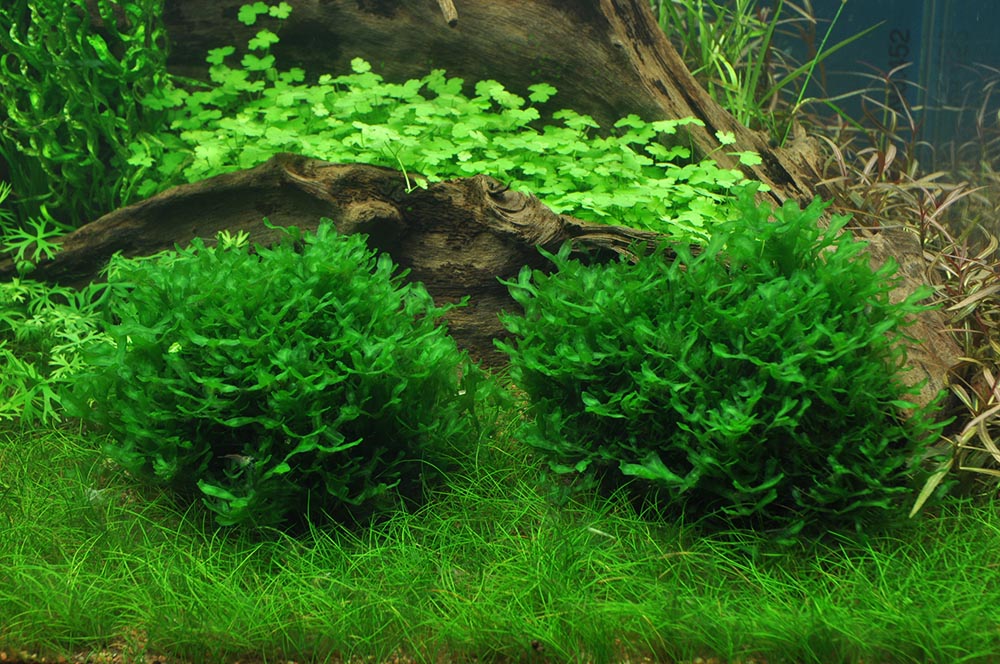 Despite its plant-like appearance, Monoselenium tenerum is a Liverwort

One of the biggest advantages to using tissue­ cultured mosses is how much easier they are to aquascape with. Rather than the awkward wire grating that these plants are often grown on, the “1–2–Grow!” line of mosses can be quickly rinsed and pulled apart for a quick and effortless decorating experience. Aside from the ubiquitous Java Moss, other members of the genus Taxiphyllum offered are a distinctive species with an upright growth form known, appropriately enough, as Flame Moss and a flat, branched variety called Spiky Moss. The fern ­like fronds of Vesicularia dubyana (Christmas Moss) and Vesicularia ferriei (Weeping Moss) can provide a sharp contrast to these, especially in an aquascape devoted to bryophytes. Arguably the most beautiful of the bunch is Fontina lisantipyretica, often referred to as Willow Moss, which develops bright green tips and tends to fare best at cooler temperatures.

The future looks bright for tissue culturing in the aquarium trade. With each passing year we see more and more varieties being offered and a greater number of retailers recognizing the many advantages of selling these plants.There are now dozens of species being produced by Tropica in this manner, covering nearly every popular plant type in the hobby. With the ease with which these can be kept alive and healthy in stores, it’s now possible for a wider range of plants to be made available to a larger number of aquarists, which can only help to increase the growing interest in the beauty of planted aquariums. 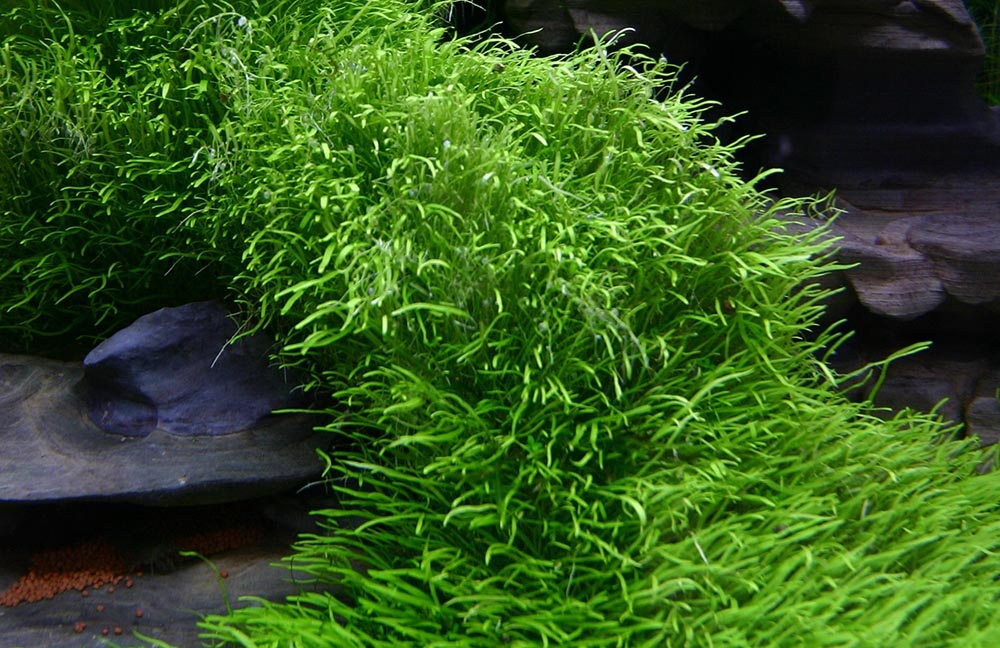 Learn more about Aquatropic’s selection of aquatic plants by visiting www.aquatropic.com/products/plants, and check out Tropica’s informative guide to aquascaping with their tissue culture plants here.