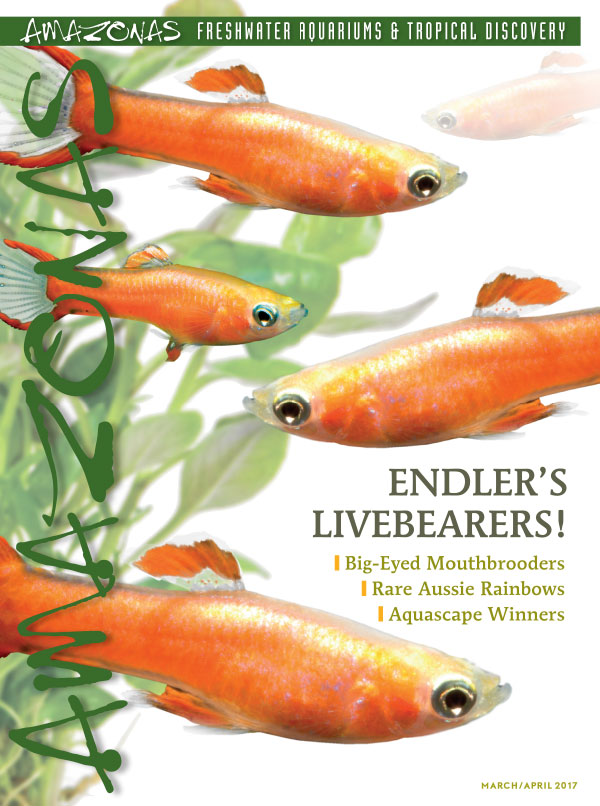 The March/April 2017 Issue of AMAZONAS Magazine is printed and now on its way to print magazine subscribers, local aquarium shops, and better bookstores. 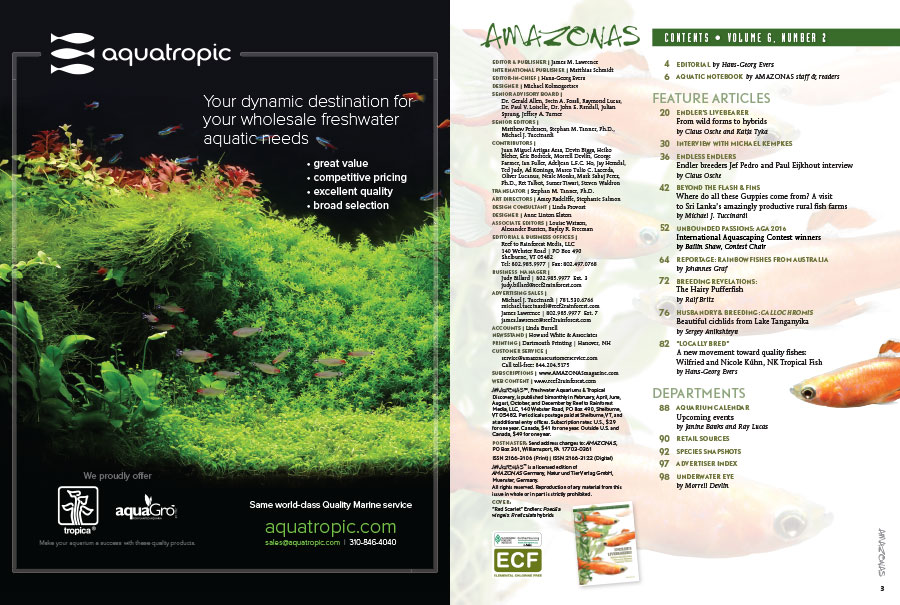 The Table of Contents: a first look at the comprehensive Endler coverage and diverse content throughout the issue. Read the TOC online here. 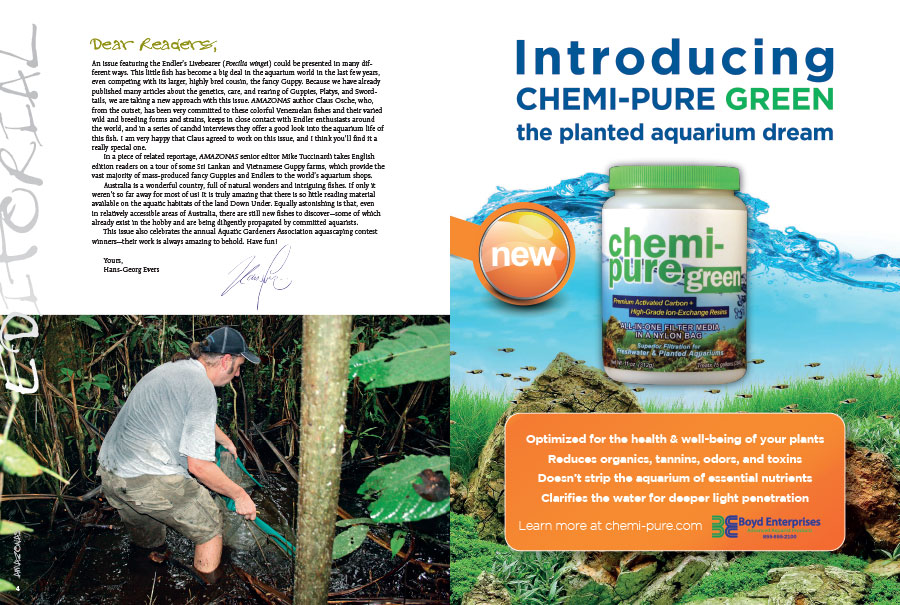 “[Endler’s Livebearer] has become a big deal in the aquarium world in the last few years, even competing with its larger, highly bred cousin, the fancy Guppy…AMAZONAS author Claus Osche…keeps in close contact with Endler enthusiasts around the world, and in a series of candid interviews they offer a good look into the aquarium life of this fish. I am very happy that Claus agreed to work on this issue, and I think you’ll find it a really special one.” -AMAZONAS Editor-in-chief, Hans-Georg Evers, introducing the new issue. 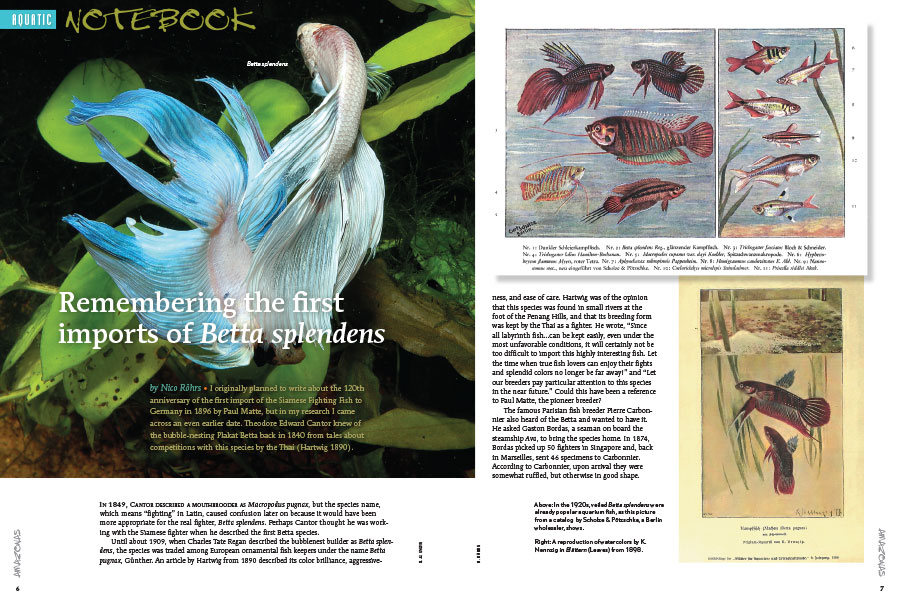 Aquatic Notebook starts off with a historical perspective from author Nico Röhrs, “Remembering the first imports of Betta splendens.” 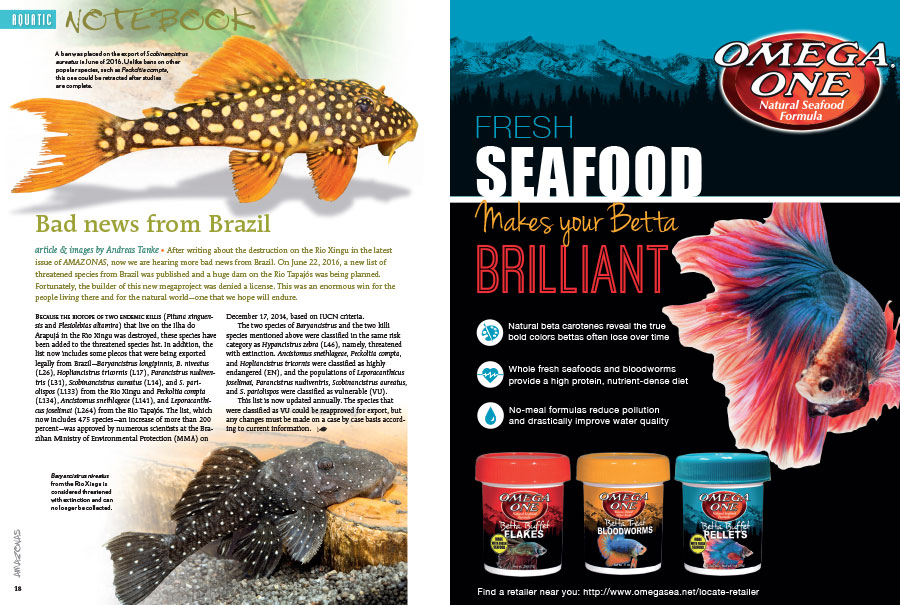 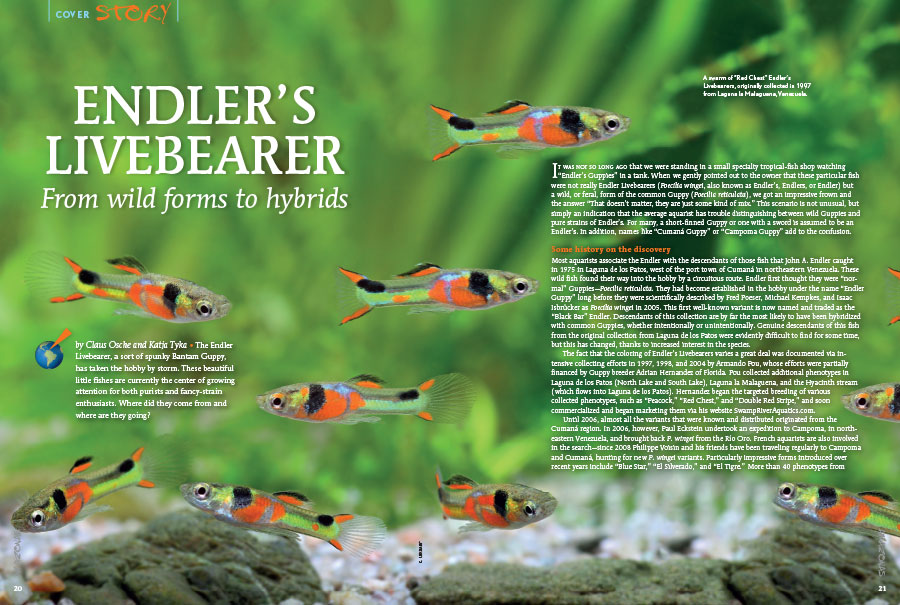 Be ready to be wowed by some of the gaudiest little fishes you’ve ever seen, as authors Claus Osche and Katja Tyka introduce you to “ENDLER’S LIVEBEARER—From wild forms to hybrids.” 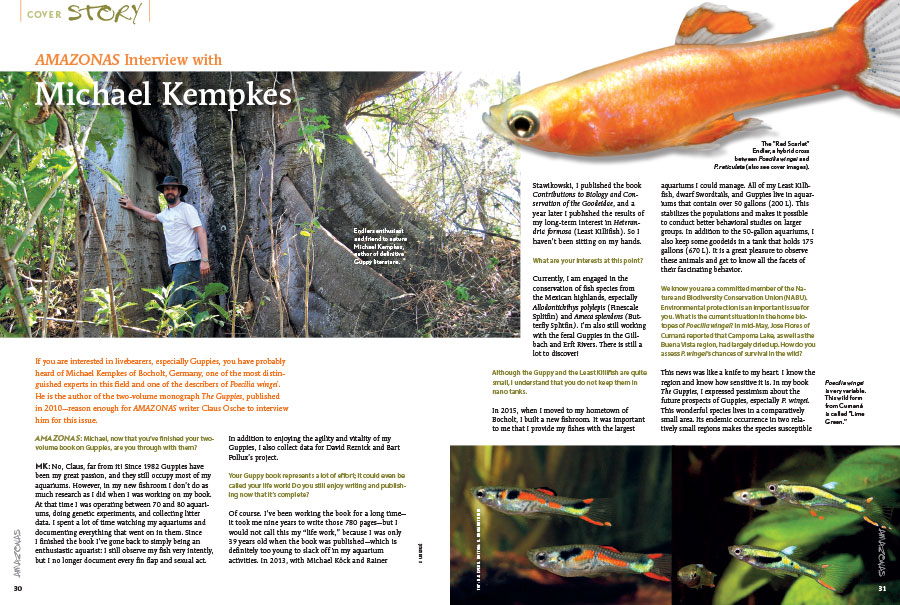 Meet Michael Kempkes of Bocholt, Germany, one of the most distinguished livebearer experts in the world and one of the describers of Poecilia wingei. He is the author of the two-volume monograph The Guppies, published in 2010—reason enough for AMAZONAS writer Claus Osche to interview him for this issue. 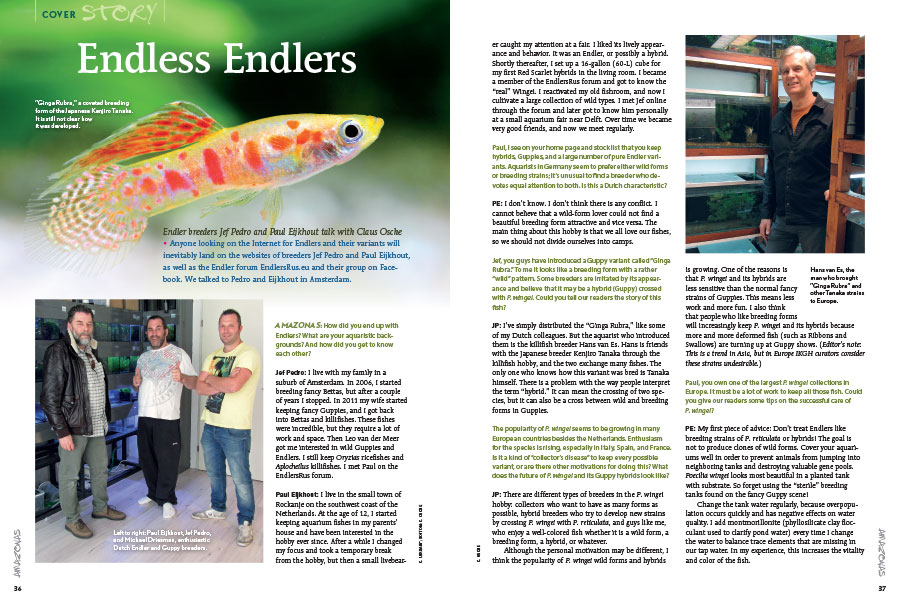 Anyone searching the Internet for premium Endlers and their variants will inevitably land on the websites of breeders Jef Pedro and Paul Eijkhout, as well as the Endler forum EndlersRus.eu and their group on Facebook. Claus Osche talked to Pedro and Eijkhout in Amsterdam and returned with insights from these prolific European breeders, shared in the interview “Endless Endlers.” 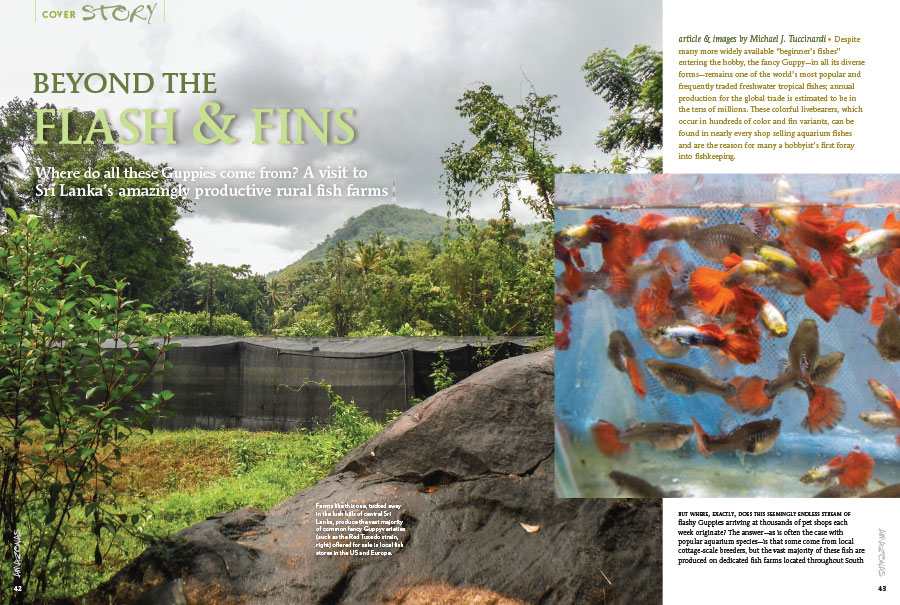 AMAZONAS Senior Editor Mike Tuccinardi takes readers on a tour of Sri Lankan and Vietnamese Guppy farms, which provide the vast majority of mass-produced fancy Guppies and Endlers to the world’s aquarium shops. Look for “Beyond the Flash & Fins” in the current issue of AMAZONAS Magazine. 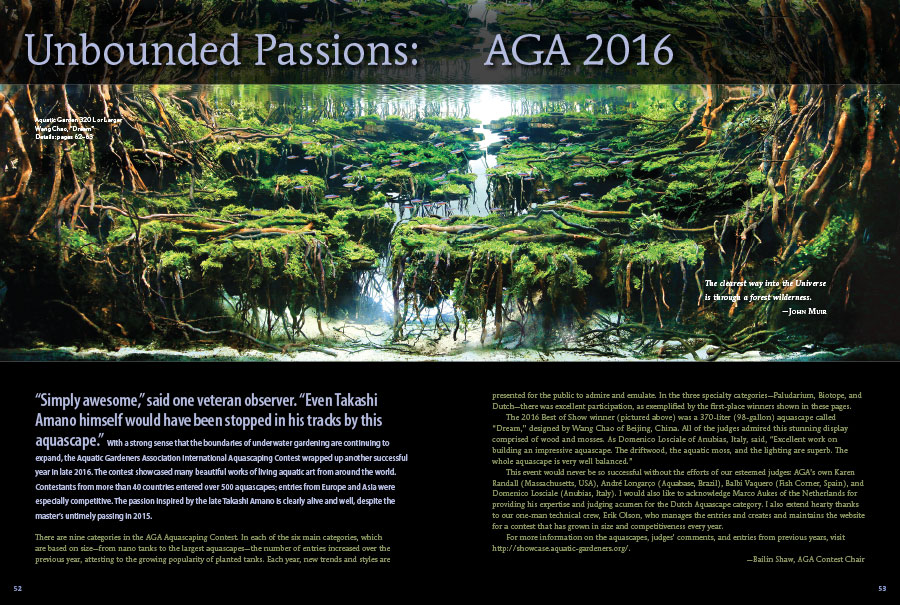 In what has become an annual tradition, AMAZONAS showcases the winning aquascapes from the Aquatic Gardeners Association’s annual Aquascaping Content. The 2016 pictorial is introduced by the AGA Contest Chair, Bailin Shaw. 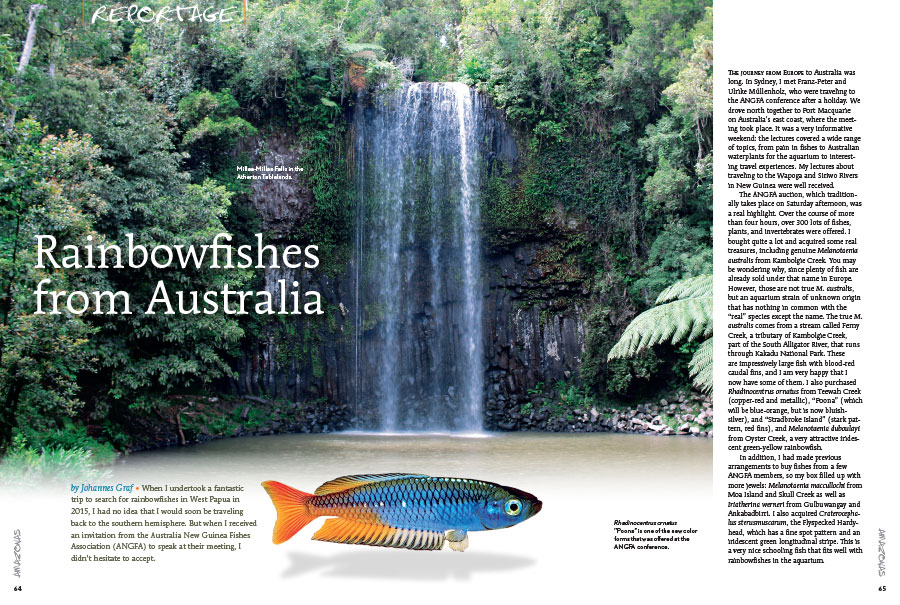 When Johannes Graf received an invitation from the Australia New Guinea Fishes Association (ANGFA) to speak at their meeting, he took the opportunity to get out into the wild streams of Australia, collecting rainbowfishes with the goal of introducing many new species to the aquarium hobby. 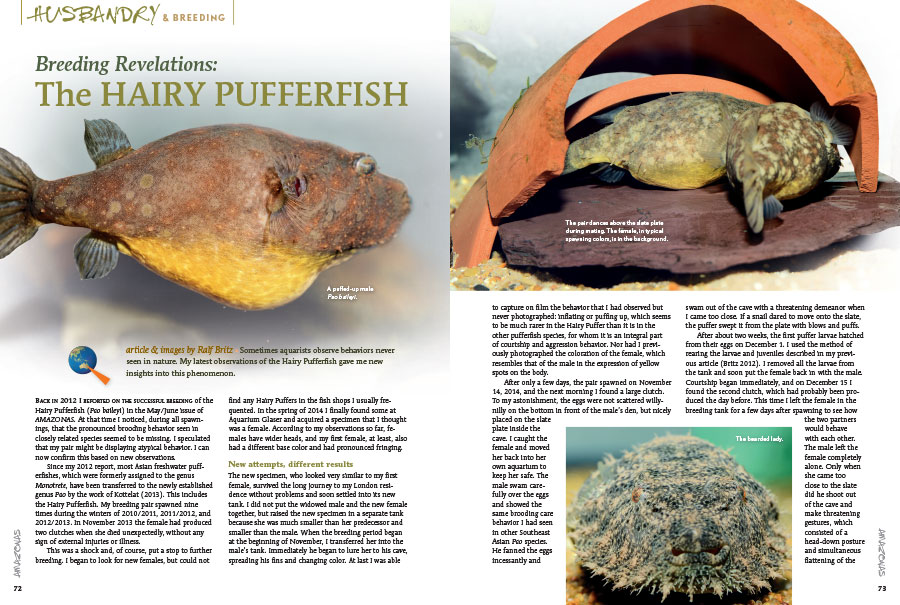 Breeding the Hairy Pufferfish (Pao baileyi) is a remarkable feat, and author Dr. Ralf Britz returns with fresh insights that at times contradict his initial observations from a few years ago. 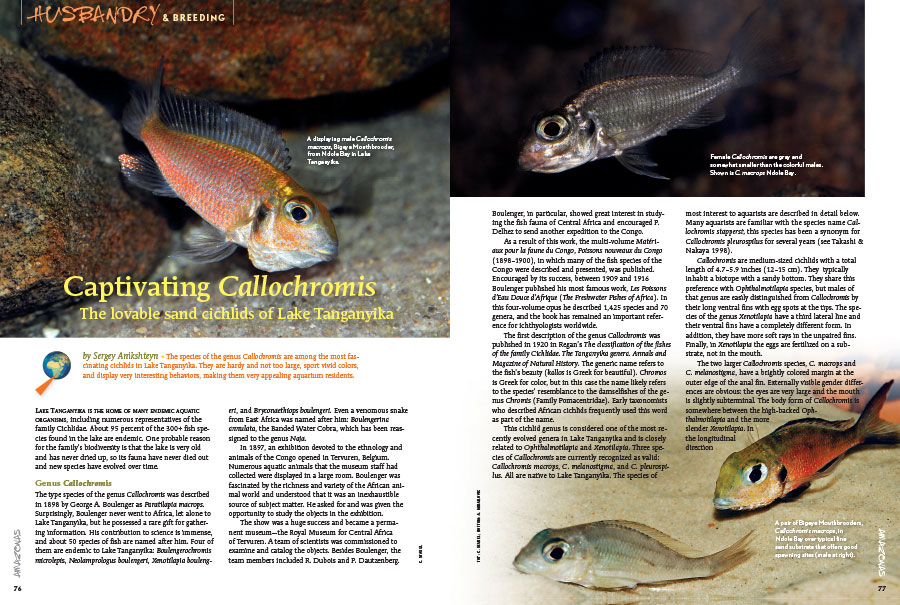 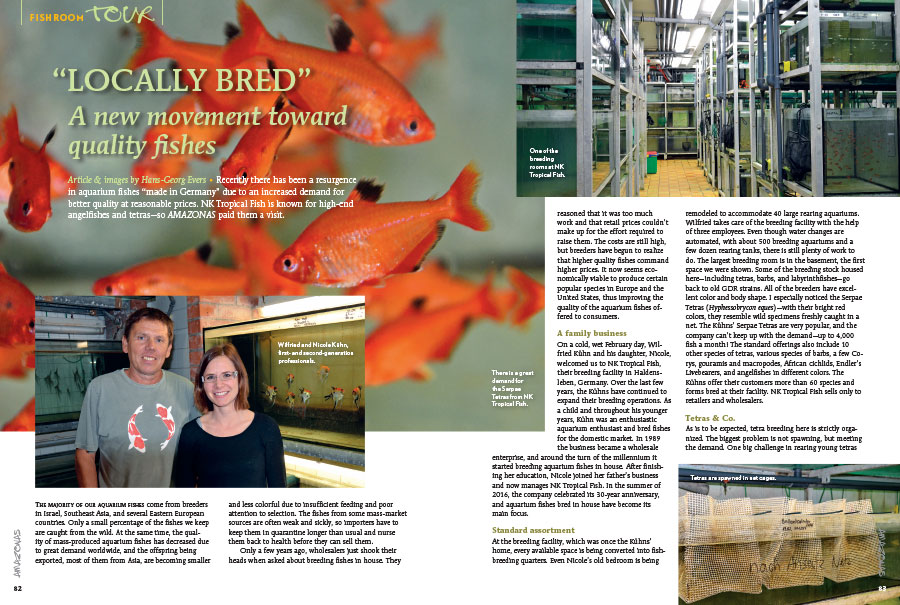 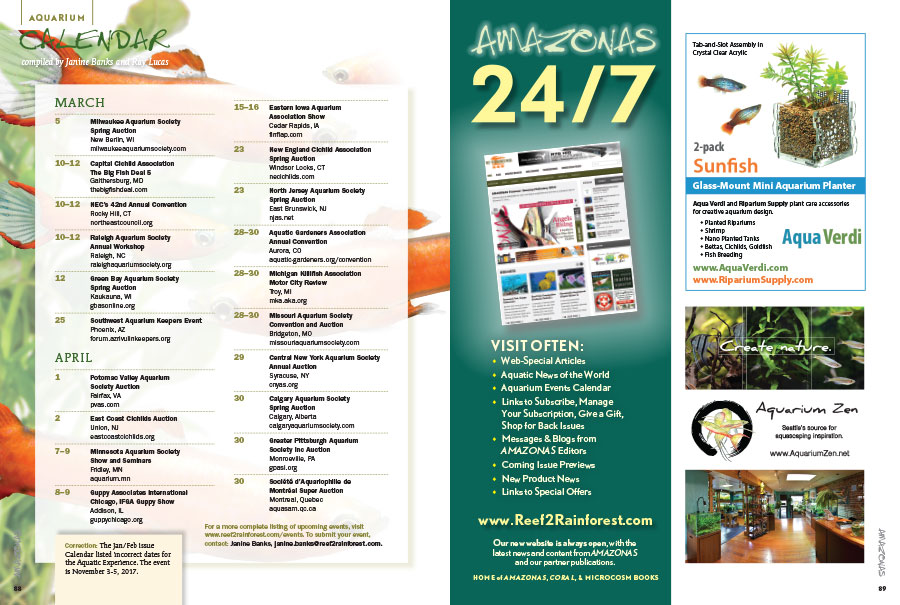 Find out what’s happening and where in the aquarium world. Have an event coming up? Send Janine Banks an email to make sure it gets posted online and in print. 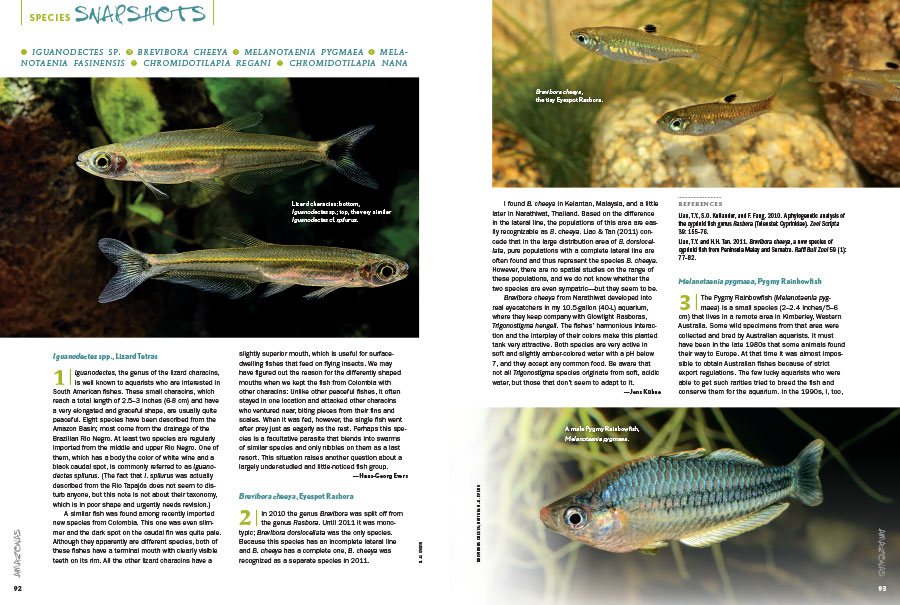 Or check out AMAZONAS Apps for mobile devices—via iTunes, Google Play for Android devices, and the Amazon Kindle store.