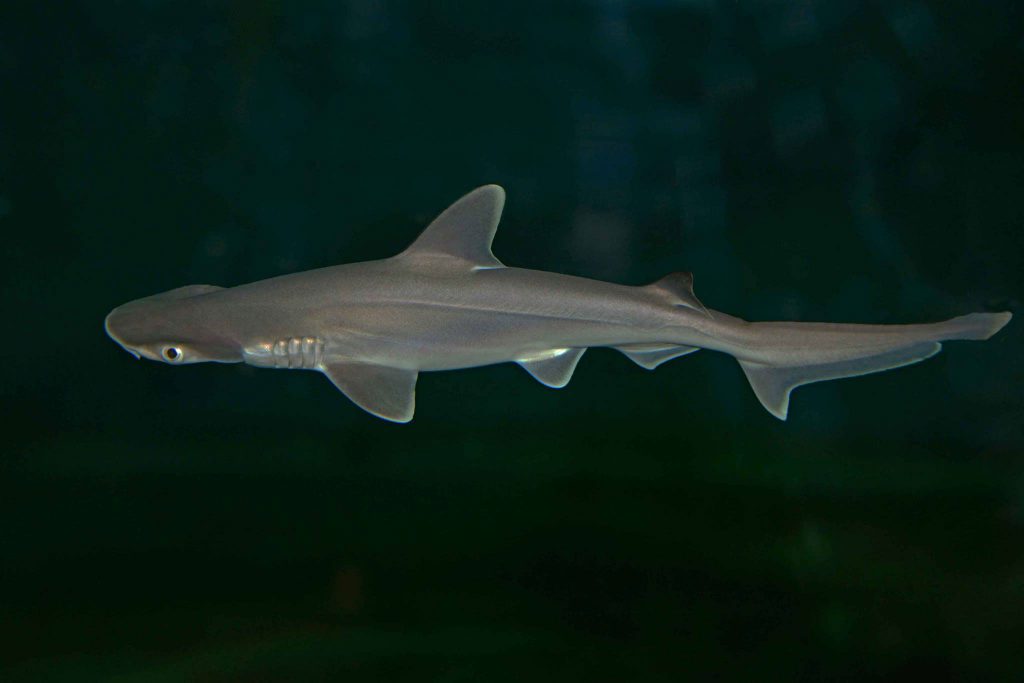 Bonnethead Sharks (Sphyrna tiburo) are small members of the Hammerhead Shark family. While females are reported to reach of length of 5 feet, most grow to only 3 ½ feet, with the males smaller still. They range throughout the tropical and subtropical regions of the Atlantic Ocean and Gulf of Mexico. They are also found in the Pacific Ocean along the coast of Mexico. They feed primarily on invertebrates such as crabs, shrimp, and cephalopods, as well as small fishes. They are a viviparous (live-bearing) species. Other species of shark lay eggs (oviparous) or have shelled eggs that hatch internally (ovoviparous).

The newly renovated Aquarium at the Toledo Zoo opened in March of 2015. One of the major exhibits is the 32,000-gallon Gulf of Mexico display. One of the iconic species in that display are six adult Bonnethead Sharks, two males and four females.

Last summer, one of the females looked fuller-bodied than the others. She was given an ultrasound exam by our veterinary staff, which confirmed she was pregnant. We moved her to an isolation system, because in most mixed-species exhibits, any Bonnethead pups born are soon attacked by tankmates. The isolated female gave birth to a litter of pups, which were raised for about 6 months and then sent to anther public aquarium.

This fall, another female shark was suspected of being pregnant. This was again confirmed by ultrasound, and she was moved to a 5,200-gallon isolation system. A few weeks later, she gave birth. We now have a second litter of pups to raise. While Bonnetheads giving birth at public aquariums isn’t a truly rare event, being able to isolate the young and then raising them is not very commonly reported.

One of our night zookeepers noticed this litter of pups while doing evening rounds. We removed the mother the next morning and returned her to the Gulf of Mexico exhibit. The babies were about 8” long at birth, but there was some size variation, and they did not all begin feeding on their own at the same time. The pups are fed an assortment of seafood items such as diced mackerel, squid tentacles, Superba krill, and smelt pieces. They feed on food as it drifts to the bottom of the tank, and then they swim in figure-eight patterns to get the food from the bottom.

Baby Bonnetheads seem to do better at warmer temperatures–80-83 degrees F–but their food energy requirements are very high at these warmer temperatures, so they must be fed to satiation three times a day. Signs of a baby that is not thriving can be subtle at first: its mouth may be open wider than normal (to increase the water flow across its gills). After feeding, each baby shark should have a slightly protruding belly; if not, it may not be feeding well enough to thrive. Severely stressed babies will begin to swim with a head-up posture, and may begin piping at the surface. This in turn uses more of the baby’s energy reserves, and keeps them from feeding properly. If this issue cannot be reversed, the baby shark will soon stop swimming, causing an oxygen deficit and then death.

In 2001, Omaha’s Henry Doorly Zoo was the first to confirm a case of a female Bonnethead Shark fertilizing her own eggs and giving birth without sperm being supplied by a male, a process known as parthenogenesis. They are also known to be able to store sperm for long periods and then fertilize their eggs after a long delay. In the case of the first litter of pups born at the Toledo Zoo, the group of pups contained both males and females. If the event had been a result of parthenogenesis, the pups would have all been female. Since none of our male sharks were sexually mature at the time, that litter must have developed from sperm stored by the female after being impregnated by a male prior to her capture in 2014.

Video of newborn Bonnethead Sharks feeding. They were difficult to film because their tank is kept under subdued lighting, and there are only six tiny sharks in 5,000 gallons of water.

Readers may wonder if this species can ever be kept by home aquarists. The answer is a qualified “Maybe, but you shouldn’t.” There are so many conditions placed on keeping this species healthy in captivity that it simply isn’t practical to keep them without the resources of a large public aquarium. One home aquarist in the Midwest built a large basement pool and had success keeping adult Bonnetheads in his home. However, this feat would not be easy or inexpensive to replicate. For those with the resources, you will need a shallow, rounded-corner aquarium, with few if any decorations (Bonnethead Sharks need open swimming space above all else). The volume of the tank needs to be at minimum 5,000 gallons. Avoid acquiring a female, as they grow so much larger than males.

The monogenean worm parasite Erpocotyle tiburonis has been reported to cause gill disease in Bonnetheads. Two issues that home aquarists usually don’t factor in to their shark acquisitions are how to maintain life support in the case of a power disruption, and how the shark can ever be relocated if your plans change. Adult Bonnetheads are difficult to transport without a multi-thousand-gallon hauling tank on the back of a truck. This means that if you do acquire one as a pup, you must be able to hold it through its entire lifespan.

Some might think the term “cute shark” is an oxymoron, but most aquarists would agree that these pups certainly do fit that term well. Our baby Bonnetheads are not on public exhibit at this time, but their mother is, along with many other species of fish and invertebrates in the new Toledo Zoo & Aquarium.