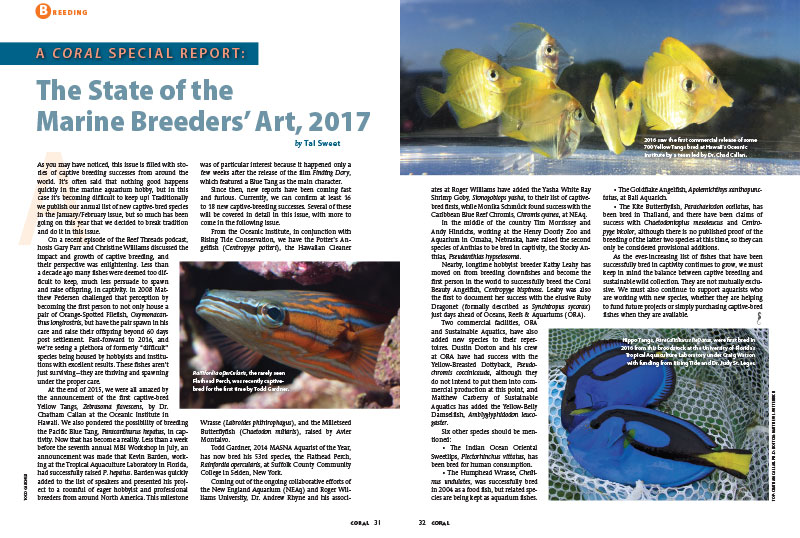 A CORAL SPECIAL REPORT: The State of the Marine Breeders’ Art 2017

As you may have noticed, this issue is filled with stories of captive breeding successes from around the world. It’s often said that nothing good happens quickly in the marine aquarium hobby, but in this case it’s becoming difficult to keep up! Traditionally we publish our annual list of new captive-bred species in the January/February issue, but so much has been going on this year that we decided to break tradition and do it in this issue.

On a recent episode of the Reef Threads podcast, hosts Gary Parr and Christine Williams discussed the impact and growth of captive breeding, and their perspective was enlightening. Less than a decade ago, many fishes were deemed too difficult to keep–much less persuade to spawn and raise offspring–in captivity. In 2008, Matthew Pedersen challenged that perception by becoming the first person to not only house a pair of Orange-Spotted Filefish, Oxymonacanthus longirostris, but have the pair spawn in his care and raise their offspring beyond 60 days post-settlement. Fast-forward to 2016, and we’re seeing a plethora of formerly “difficult” species being housed by hobbyists and institutions with excellent results. These fishes aren’t just surviving—they are thriving and spawning under the proper care.

At the end of 2015, we were all amazed by the announcement of the first captive-bred Yellow Tangs, Zebrasoma flavescens, by Dr. Chatham Callan at the Oceanic Institute in Hawaii. We also pondered the possibility of breeding the Pacific Blue Tang, Paracanthurus hepatus, in captivity. Now that has become a reality. Less than a week before the seventh annual MBI Workshop in July, an announcement was made that Kevin Barden, working at the Tropical Aquaculture Laboratory in Florida, had successfully raised P. hepatus. Barden was quickly added to the list of speakers, and he presented his project to a roomful of eager hobbyist and professional breeders from around North America. This milestone was of particular interest because it happened only a few weeks after the release of the film “Finding Dory,” which featured a Blue Tang as the main character. 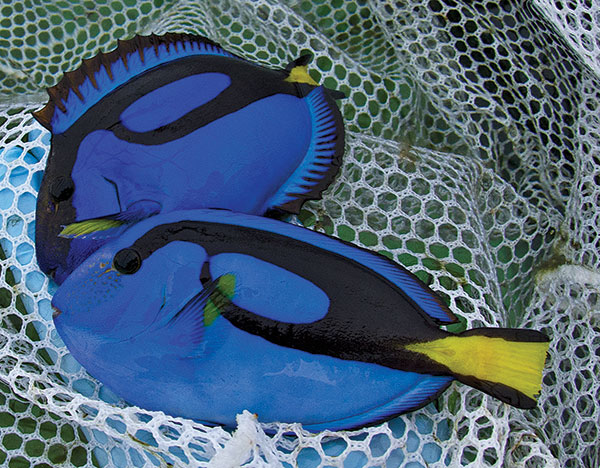 Since then, new reports have been coming fast and furious. Currently, we can confirm at least 16 to 18 new captive-breeding successes. Several of these will be covered in detail in this issue, with more to come in the following issue.

From the Oceanic Institute, in conjunction with Rising Tide Conservation, we have the Potter’s Angelfish (Centropyge potteri), the Hawaiian Cleaner Wrasse (Labroides phthirophagus), and the Milletseed Butterflyfish (Chaetodon miliaris), raised by Avier Montalvo. 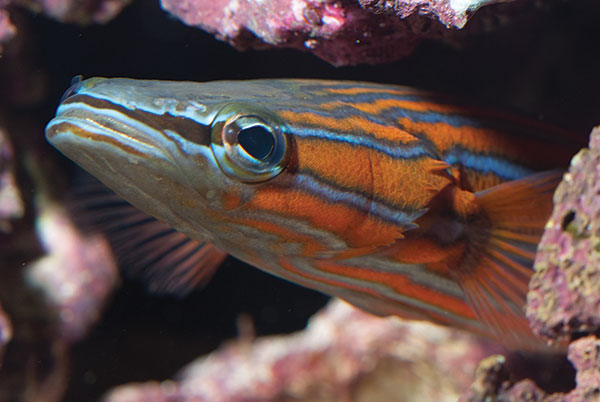 Coming out of the ongoing collaborative efforts of the New England Aquarium (NEAq) and Roger Williams University, Dr. Andrew Rhyne and his associates at Roger Williams have added the Yasha White Ray Shrimp Goby, Stonogobiops yasha, to their list of captive-bred firsts, while Monika Schmück found success with the Caribbean Blue Reef Chromis, Chromis cyanea, at NEAq. [Editor’s Note – stay tuned to Reef2Rainforest.com for an exclusive online look at the breeding of the Blue Reef Chromis!]

In the middle of the country Tim Morrissey and Andy Hinrichs, working at the Henry Doorly Zoo and Aquarium in Omaha, Nebraska, have raised the second species of Anthias to be bred in captivity, the Stocky Anthias, Pseudanthias hypselosoma.

Nearby, longtime hobbyist breeder Kathy Leahy has moved on from breeding clownfishes and become the first person in the world to successfully breed the Coral Beauty Angelfish, Centropyge bispinosa. Leahy was also the first to document her success with the elusive Ruby Dragonet (formally described as Synchiropus sycorax) just days ahead of Oceans, Reefs & Aquariums (ORA).

Two commercial facilities, ORA and Sustainable Aquatics, have also added new species to their repertoires. Dustin Dorton and his crew at ORA have had success with the Yellow-Breasted Dottyback, Pseudochromis coccinicauda, although they do not intend to put them into commercial production at this point; and Matthew Carberry of Sustainable Aquatics has added the Yellow-Belly Damselfish, Amblyglyphidodon leucogaster.

Six other species should be mentioned:

As the list of fishes that have been successfully bred in captivity continues to grow, we must keep in mind the balance between captive breeding and sustainable wild collection. They are not mutually exclusive. We must also continue to support aquarists who are working with new species, whether they are helping to fund future projects or simply purchasing captive-bred fishes when they are available.

Orange  Common Name = new to the list this year.
Pink Common Name = new to the list this year, but as a priorly overlooked accomplishment
Green = Commonly Available. Easy to find as a captive-bred fish, often from more than one source, throughout 2016.
Blue – Moderate to Low. Might have taken some searching, and availability may have been limited, but was reasonably obtainable as a captive-bred fish in 2016.
Purple = Scarce. Generally only one source or breeder is known, and potentially only a handful of specimens may have been available. You may have “had to know someone” or even know the breeder directly in order to obtain them as captive-bred fish during 2016.
Black = None. The authors and consulted parties were unaware of any retail availability of this species from a captive-bred source during 2016.

*provisional listing, minimal to no published proof, but from trusted source.

**availability ranking has been changed to reflect additional information that came after print publication.