“Not Dead Yet”: A Conservation Scientist’s Take on the World’s Reefs

Last week, an article published by Outside Magazine, purportedly an obituary to the Great Barrier Reef, went viral across multiple social media platforms, causing a bit of  a stir in the conservation community. Although the article itself was apparently meant to be taken as something of a satire, it was shared widely by many who likely never actually read the essay. Taking the headline at its word, many people began mourning the presumed loss of earth’s largest coral reef. 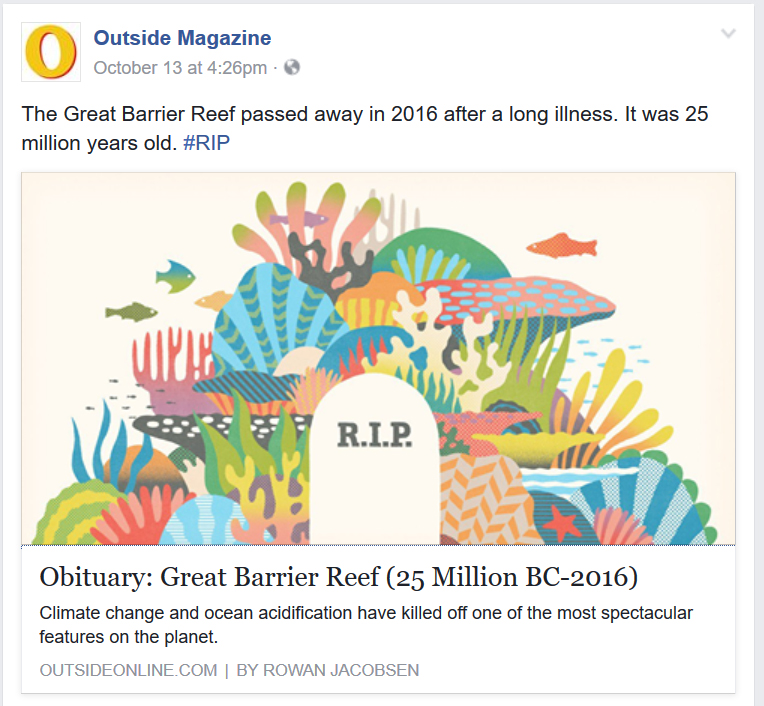 To me, and more than a few members of the global conservation community, this obituary and the viral response it prompted were both premature and ultimately damaging. It is just the most recent—and perhaps most extreme—example of a worrying trend in conservation efforts, and especially how they are reported on in the media. There is a trend towards “doomsday” predictions and hyperbole, and these fail to convey what is perhaps the most important aspect of any conservation message: the hope that something can still be done. I was planning to write up a few words in what would have been another of many commentaries prompted by the Great Barrier Reef Obituary, but fortunately, I didn’t have to. 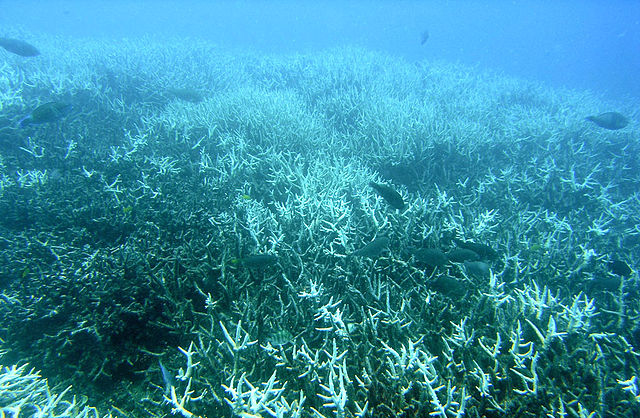 Les Kaufman, a well-known conservation scientist and a veteran in dealing with species and ecosystems on the brink of extinction, penned a far more thoughtful, eloquent, and even entertaining response to this viral article than I could have hoped to. Dr. Kaufman, who conducted pioneering research on cichlid extinctions in Lake Victoria and has been active in coral reef conservation and restoration for many years, was kind enough to allow us to reproduce his take on the “death” of the Great Barrier Reef here in its entirety.

In “Monty Python and the Holy Grail,” Scene 2, a moribund medieval man who is nonetheless “getting better” is loaded by his caregiver against his will onto a passing cart led by a guy whose job it is to gather the fruits of death. When the poor fellow protests profoundly, “I’m not dead!” a negotiation ensues between cartman and caregiver. As a favor to the caregiver, the cartman dispatches the unfortunate to make him definitively dead, upon which his corpse is summarily loaded onto the cart with the others.

Obviously this scene, like most of the Monty Python canon, is meant to be humorously thought-provoking. In a similar vein, Outside magazine’s online site recently published a satirical obituary for the Great Barrier Reef, the point being to underscore the dismal trajectory of the world’s greatest coral reef system so that something might be done about this and quickly. It was a satirical obituary. A lot of people didn’t get the satire part, or did and didn’t think it was particularly funny. Evidently, a good many coral reef lovers are worried that a premature death sentence for the world’s coral reefs will have the same effect as the cartman’s bludgeon. Now that a tsunami of comments savaging the author of this tongue-in-cheek blog seems finally to have faded to foam, we should reflect on what that little episode was truly all about.

The GBR really has suffered calamity, but most of it remains dominated by living hard corals, coralline algae, and coral reef fishes and invertebrates, and so is still recognizable as a coral reef system. Just a very sick one. Imagine a person with gangrene, whose foot is rapidly heading south. His head still looks pretty good and will for at least a little while longer. The important thing is that something can still be done about it and the person could yet survive and thrive, even if needs be, sans foot. Can something still be done about the world’s coral reefs? This is a very important question, because if not, we have many other things to worry about. If yes, we have a gigantic caregiving role on our plate that we may well have caused, but we certainly hadn’t asked for. No wonder the caregiver was glad to get the cartman’s violent favor.

So what about the blog was actually true, and what of it could perhaps have been dangerously misleading? Well, coral reefs are threatened globally by anthropogenic climate change, which includes ocean warming, triggering mass bleaching events, coral disease pandemics, and killer cyclonic storms; and ocean acidification that compromises corals’ ability to repair, regenerate, and repopulate episodically devastated reef environments. Climate change is an anthropogenic ill on the scale of our entire planet. You might be inclined to think that anything done to combat the effects of climate change on a local scale is pissing into the wind. Except, this is hardly the whole story. It is going to take us a few centuries to bring runaway climate change under control, even with the effort heavily front-end loaded: right now through the next couple of decades is absolutely critical. Coral reefs are going to have to somehow survive this “climate hiatus” if they are to thrive once more in more or less their current forms. That’s going to take a lot of help, on a very local level. And it’ll be hard. Forget climate change for a moment. Coral reefs are locally besieged by overfishing, limestone mining, military oceanscaping, coastal development, and by virulent and voluminous runoff from land loaded with sediments, nutrients, trash, toxins and pathogens. We do all this stuff. We could, for example…oh my gosh…consider not doing it?

If we are to judge from the current situation in Biscayne National Park just south of Miami, then the answer might be “not likely.” Given the dire condition of the Florida reefs in general, the National Park Service found prudence dictating that everything possible should be done to intensively steward the part of the reef tract that had landed on their watch, in the BNP. This recently rich stretch of patch reefs is strategically located just north of the Florida Keys, linking the Keys reefs with a northern reach of coral communities that stretch all the way up to West Palm Beach. In warming seas, such a corridor to cooler waters could be critical. NPS staff planned on placing the park’s entire coral reef habitat into a marine reserve to shield it from physical damage from the hurling of traps, nets, lines and anchors on this beloved fishing ground. Small park, tiny reserve, potentially very big payoff. That didn’t fly politically, so the planned reserve was shrunk to one-third of the park’s coral reef habitat, or only about 6% of the park’s total area.

Note that after years of heated discussion among marine scientists a consensus recommendation has emerged: if you are really serious about maintaining the health of any marine ecosystem, you need to effectively shield about 30% of it from direct impacts, as a marine reserve. This is a judgment call, but one no weaker than your doctor’s insistence that you’d better stop smoking or risk a high likelihood of dying from lung cancer or emphysema. The coral reef itself comprises a small proportion of an ecological landscape that includes seagrass, mangrove forest, and other habitats that help to nurture and support the reef and the goods that it provides us. 6% isn’t 30%. In a well-muscled move led by Congresswoman Ileana Ros-Lehtinen (R) of District 23, there is now an attempt to beat that 6% back down all the way to zero. Any such ill-considered policy must have some justification. The justification offered is that the reef’s poor condition is due to climate change, about which nothing can be done at a local level. This is supremely ironic, given the 2016 Republican presidential nominee’s statement that “The concept of global warming was created by and for the Chinese in order to make U.S. manufacturing non-competitive.” So, since the coral reef–which is essential fish habitat–will not respond to local stewardship, then why stand in the way of fishing it down the rest of the way? Some kind of fishery could actually be sustainable. It just would not be a coral reef any more, and the target species would no longer be those that require a coral reef habitat.

Snappers and groupers aren’t the only things that require a coral reef habitat. Coral reefs have evolved to break the waves. Reef crest corals like the endangered and majestic elkhorn coral are surfers, and their lives are one long ride. By virtue of corals’ millennial service on the front lines just off the beach, we humans have expensive coastal real estate. Also, somewhere around one quarter of all marine organisms are coral reef citizens: no reef, no citizens. But who cares about them? You might be surprised. In this country, causing species to go extinct, even locally extinct, is illegal. It is also strongly frowned upon everywhere else on this planet.

There is a lot that we can–and–must do to shepherd coral reefs through the climate hiatus. During this interregnum, our reefs may not look like they used to, but there’s a chance for them to deliver value and to reiteratively lift themselves up from successive climate clobberings. The odds are good that we can facilitate this happy outcome, but only if we do two things. First, we stop crapping on reefs with local insults and policies that look like lunacy a mere year or two out. Second, we support recovery in every way possible, even by farming and planting seed corals and their ecological allies back out on the reef, should that be necessary. For it already is, and we already are. It’s early days: we’re just learning how.

So the next time the cartman chants, “Bring out your dead” to the beat of wooden wheels on cobblestone, put the bludgeon away. Care for the people and things that you yourself had a hand in making so sick, and fill the space between forehead and nose tip with thoughts of a longer-term future.

(The author thanks Dr. Anthony Janetos, Director of the Pardee Center, for reminding him of the mentioned scene from “Monty Python and the Holy Grail.”

—Les Kaufman
Professor of Biology, Boston University Marine Program and Pardee Center for the Study of the Longer Range Future 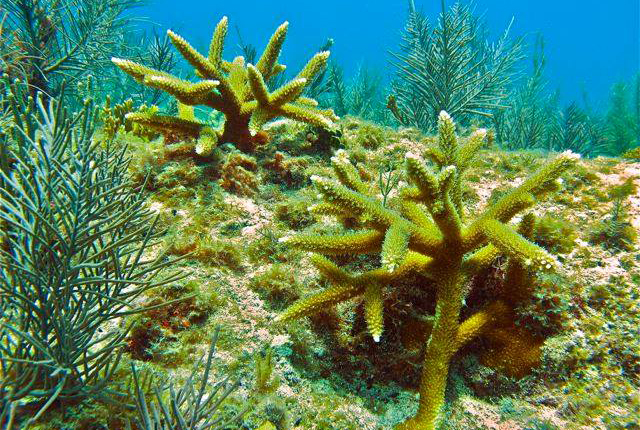