One of the activities I tried several times during my diving-photography career was to take “extreme” macro shots of various invertebrates in the field. After many changes of equipment–keep in mind this was ALL done on a shoestring budget, and was attempted well prior to the introduction of digital photography–I settled on an apparatus that, at maximum magnification, along with a good dose of luck, allowed me to get an image on a 35 mm photographic slide that was magnified up to about 12 times. Consequently, if the animal I photographed in the field was actually about 2 mm long, the image on the 35 mm photographic slide would be about an inch long.

A Problem Or Two

There were a lot of technical problems with taking these images, not the least of which was that the object-to-lens distance was very small, and that distance, in part, had to be accommodated within my camera’s underwater housing. Through many modifications, I was hoping to get my DIY system constructed reliably enough to allow me to vary the amount of magnification under water, but while that was theoretically possible, at the time I left the Pacific Northwest (and this kind of diving photography) to move to Montana, I had not succeeded in doing that on any dive.

Given the water currents in the areas where my underwater photography often occurred, even holding one’s position during the minimal water flow–euphemistically referred to as slack water–could be difficult. The large camera housing and required strobes created a tremendous amount of drag, which caused a lot of problems. Other problems included trying to look through the viewfinder of the SLR camera with a scuba mask on, and so on. Suffice it to say that getting any sort of image was a problem. 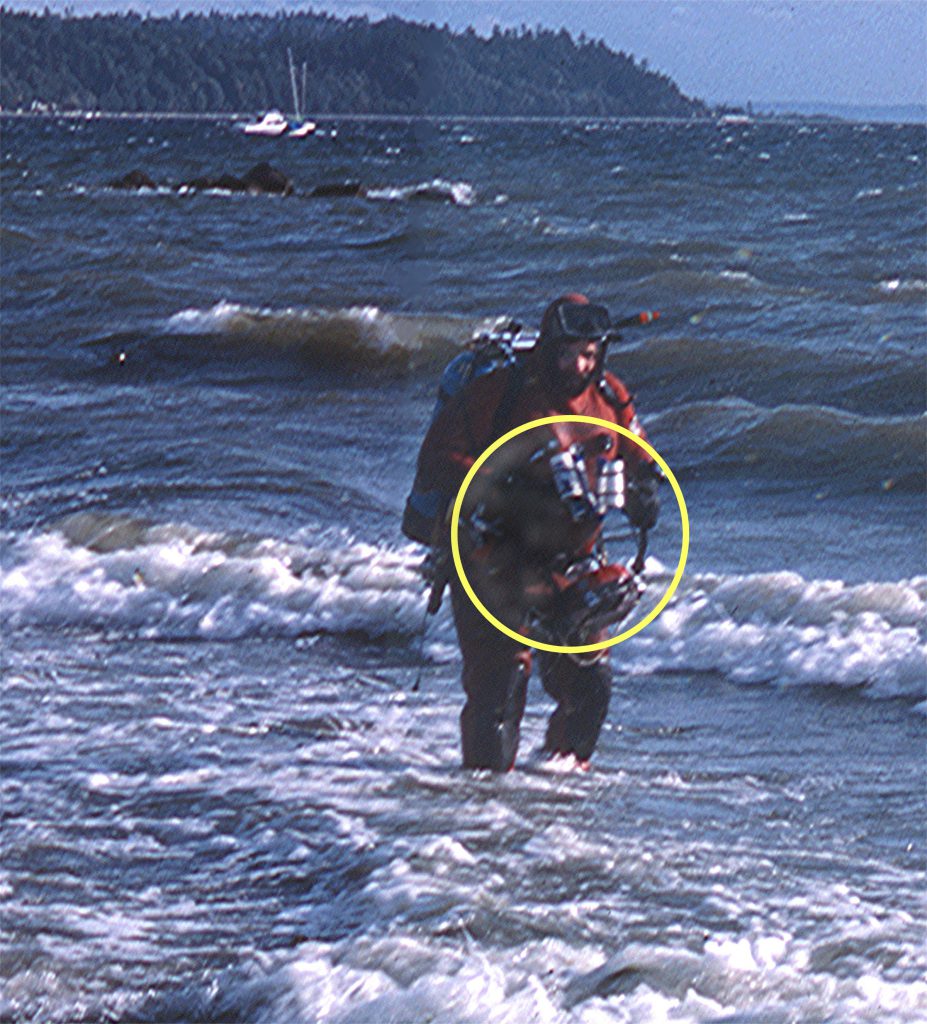 The author coming to the beach after a dive to photograph animals in a Puget Sound Sea Pen Bed. The camera apparatus is circled.

Probably the major difficulty, however, was getting enough light from my strobes to sufficiently illuminate the very small critters I was photographing. The tiny target had to be hit with a burst of sufficiently bright light that enough light would be reflected back through the plastic window of the underwater housing, followed by the glass lens, and then the remaining feeble photons would have to pass through the length of the bellows/extension tubes connecting the lens to the camera body and be in sufficient quantity to properly expose the film. After a lot of failed attempts at this, I began to feel like I needed the explosive flash from a relatively large tactical nuclear weapon to take the picture. And, that if I did successfully get enough light to the object so that the resulting slide would be properly exposed (remember, this is prior to digital photomanipulation), it often felt as though there was so much light produced by my strobes that the object I was photographing would be vaporized, making each image a unique “one shot affair.” 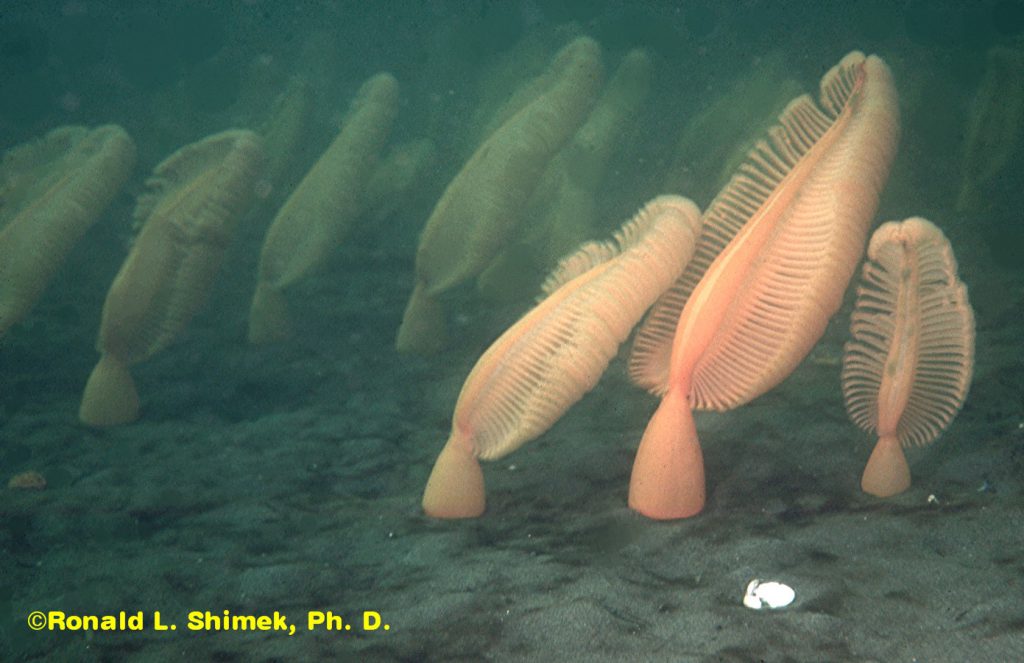 Sea pen (Ptilosarcus gurneyi) “bed” in Puget Sound at a depth of 10 m.  The largest pens stand about 60 cm (2 ft) out of the sediments.

During parts of the 1970s through the early 1990s, I spent some diving time trying to photo-document events occurring in sea pen aggregations (called sea pen “beds,” for no logical reason known to human cognition). Over the course of about 25 years, I made maybe 150 dives in this habitat and took several hundred images. I feel I can justify this blog post in CORAL because sea pens are occasionally kept by hobbyists, and the sea pens in the shallow Puget Sound regions, Ptilosarcus gurneyi–although from cool water habitats–are probably the most well-known ones, and the nudibranch illustrated here, Flabellina trophina, preys upon small sea pens. In any case, I was photographing F. trophina in the “beds,” because although it was not documented that it preyed on the pens, I found that it was a common predator on them (or at least it was when I was actively diving in those areas), and I wanted to document its behavior well. I wanted these small animals to be well-illustrated. I took this image because it shows a lateral view of the animal in a common posture, with its snout elevated. 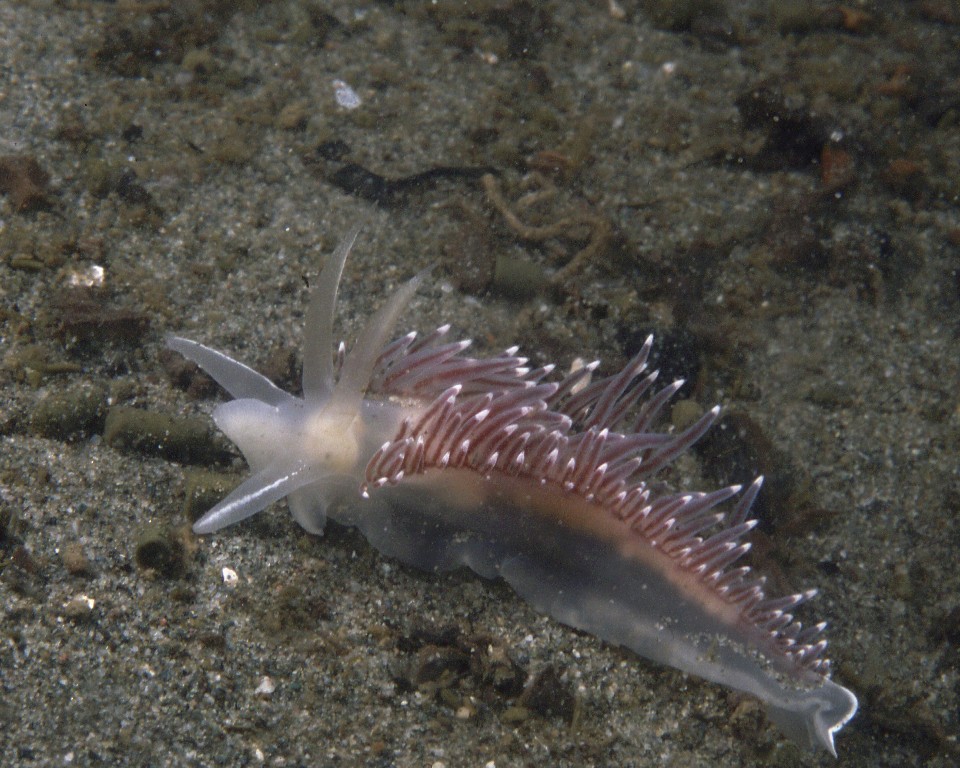 A Flabellina trophina on the sediment in a sea pen bed. The nudibranch is about 2.3 cm, or about 0.90 inches long.

Preparing this image for the blog involved making a lower (much lower) resolution image than I had in my folders, and in doing so I noticed what I thought were artifacts, probably due to fine hairs that got on the slide prior to scanning. 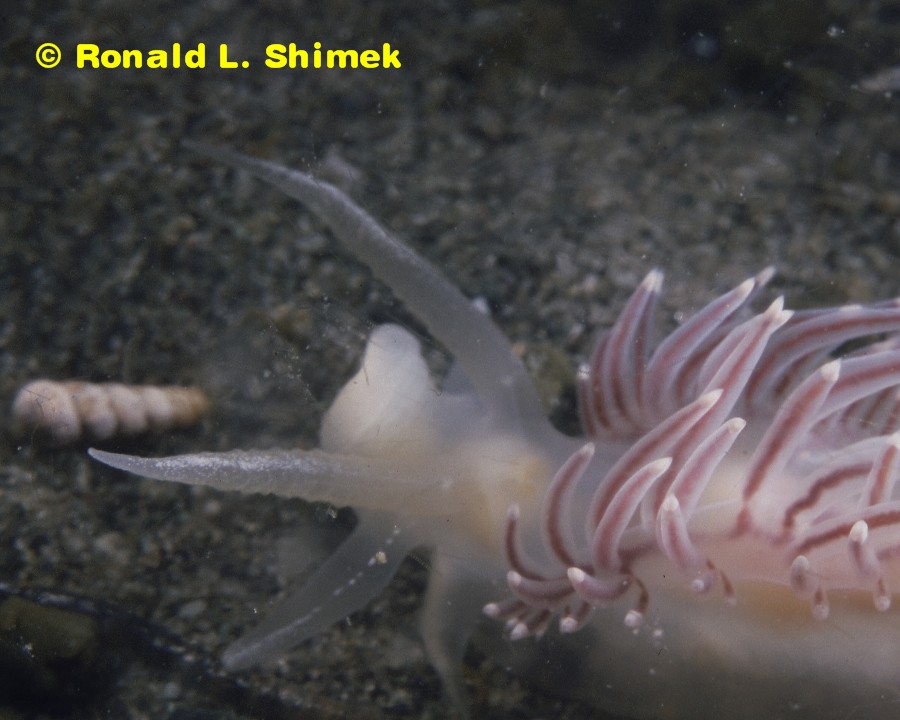 Flabellina trophina with “hair artifacts” – unmarked. Same nudibranch as illustrated above. Width of photographed field is about 1 cm.

And, as I live in a house with a large hair factory specializing in producing copious quantities of very thin, fine hairs (the factory, AKA my best buddy and wonderful friend Casper, a Maine Coon Cat and a giant fur ball), this would not be surprising at all. I figured that if these were, indeed, fine Casper hairs, I would have to re-clean the slides and try scanning them again. Some of the “hair” images/artifacts are circled. There are a lot more faint “hair-artifacts” visible than are circled. They are particularly evident on the high-resolution image (600 dpi images, compared to the 96 dpi of most online images) resulting from the scan.

When I examined the fine “hairs,” I found that they were not artifacts at all, but were actually part of the original image. They were, in fact, images of microscopic phytoplankton floating by in the water near the surface of the animal as I took the images. The apparatus I used for photography could most certainly resolve microscopic subjects, and here is the inadvertent proof. 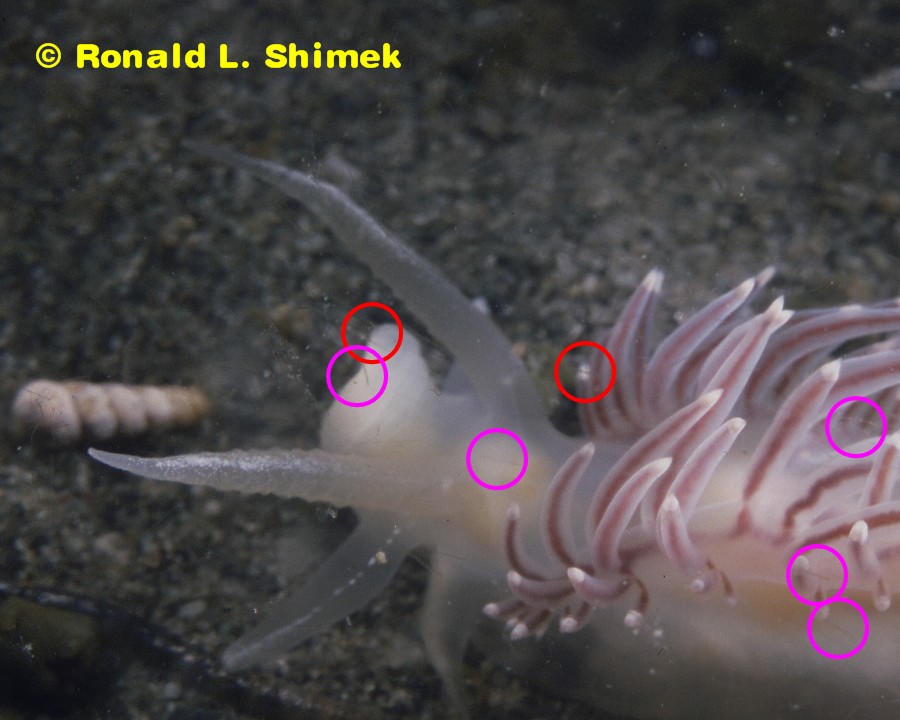 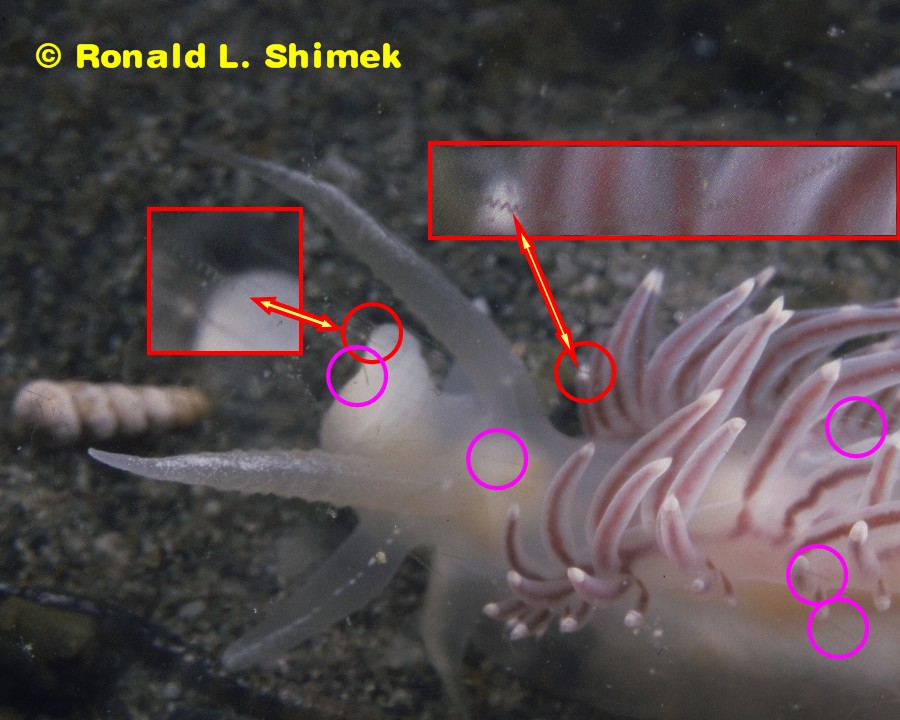 I further enlarged the portions of the images in the red circles and included them in the original image. They are shown outlined in red and are indicated by the arrows. Note the “zig-zag” structures. Well, those structures are not 2-D zig-zags, but rather 3-D helices of diatoms. They are helical (often incorrectly called “spiral”) chained diatoms).

Here is a link to a photomicrograph showing similar diatoms in a better view.

I think this is very interesting, because it shows how what appears to be the relatively clear water in a photograph of an underwater scene may in fact be filled with plankton that are just below the resolution capabilities of either the camera or the printer or scanner to show.

I have often heard a comment to the effect that a given reef image shows water so clear that it is “obvious” that there is no plankton in it. I wonder how many of those images would show microscopic plankton of one sort or another if they had been taken with a better camera or printed in better manner. Obviously, in this Cool, Clear Water there is a lot more life than meets the eye.

Without the taste of water, cool water

Old Dan and I with throats burned dry

And souls that cry for water, cool, clear water…”

This a classic Western song, and the best-selling version of this song was performed by Vaughn Monroe and the Sons of the Pioneers in August 1948, when I was about 5 months old. Truly, it is a golden oldie.

The take-home message is that in the warm, clear water of a reef, the same situation occurs as in the cool, clear water of Puget Sound, and many plankton are found in the water that are simply too small to be seen or recorded by a 35 mm camera. Those phyplankton are nevertheless a major food source for many reef organisms.