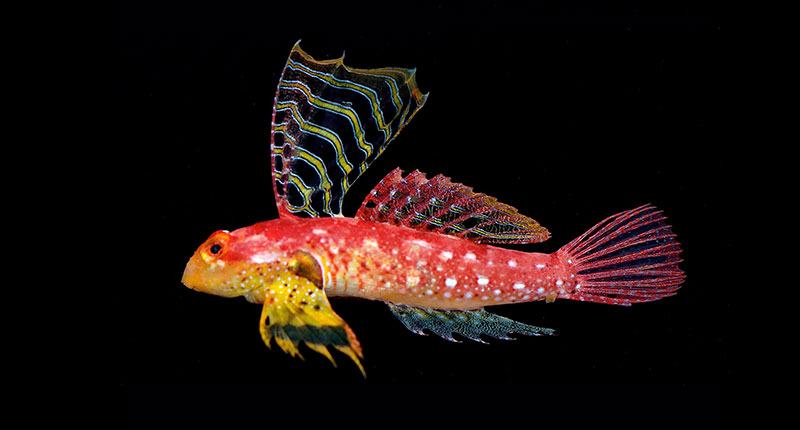 The male holotype of the newly described Ruby Dragonet, Synchiropus sycorax, initially introduced by the aquarium trade as the “Ruby Red Dragonet”

News breaks today that the vibrantly colored dragonet, which made its trade debut just a few years ago (early 2013) under the trade name “Ruby Red Dragonet,” now has a formalized scientific name. Shortened to simply “Ruby Dragonet” (on the basis that “Ruby Red” is somewhat redundant), we can now know this species as Synchiropus sycorax. The name was published in the journal Zootaxa, in the article Synchiropus sycorax, a new species of dragonet from the Philippines (Teleostei: Callionymidae), by Yi-Kai Tea, and Dr. Anthony C. Gill. 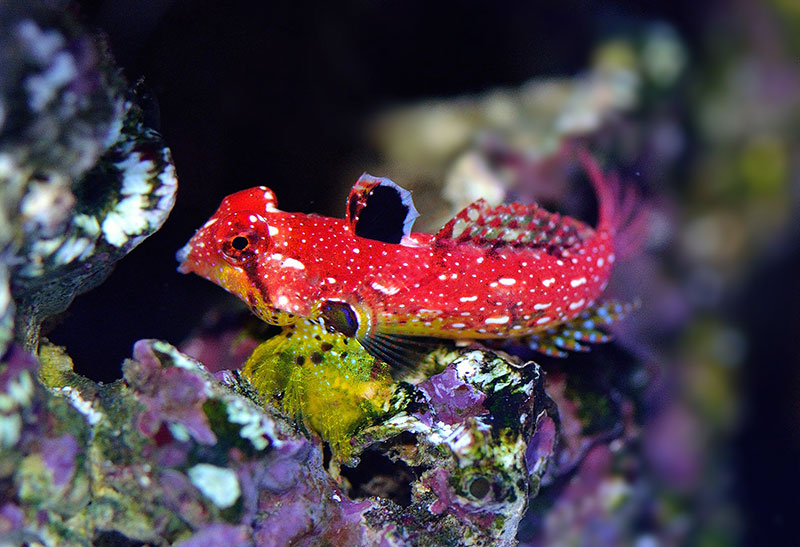 A female “Ruby Red,” or simply “Ruby” Dragonet, now Synchiropus sycorax, clearly displaying the sexual dimorphism and dichromatism in the dorsal fin that makes it so easy to differentiate the sexes.

This species has seen a meteoric rise in the aquarium trade, from individuals costing hundreds of dollars while being very limited in availability, to almost ubiquitous offerings at times at very affordable prices. Like every other dragonet, they are slow-feeding benthic pickers, which means particular care must be offered to ensure their well-being. This species was bred in 2016 nearly simultaneously by two distinct camps, with reports first coming from the the team of Tom Priscu and Kathy Leahy via the Marine Breeding Initiative (MBI), and ORA’s commercial release that came just days later.

It’s interesting to note that all of these accomplishments occurred in a relative vacuum of information; the formal description of S. sycorax on Oct. 1, 2016, finally reveals the origin of the species, currently known only from Jolo Island, Sulu Archipelago, Philippines. The paper also furnishes our first detailed habitat information; “it occurs at depths of 20–38m in areas of broken coral rubble interspersed with outcrops of soft and stony corals.” This information can be attributed to the transparent collaboration of Barnett Shutman at RVS Fishworld, who even provided the type specimens used for the description through Iwarna Aquafarm.

We encourage you to read the full description to learn more about this formerly mysterious species, including additional photos of it, and the related S. tudorjonesi. You will also find out exactly where its interesting name, sycorax, comes from!