Pearls? In Your Tridacna? 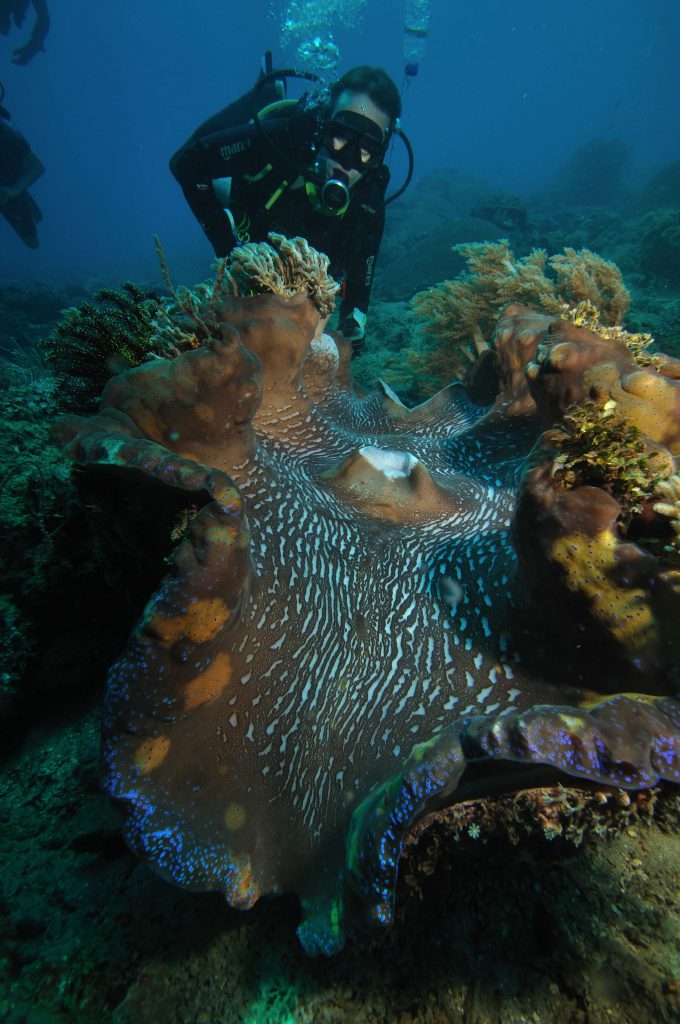 It seems to me, as an old and studious zoologist, that of the many mating rituals occurring in animals, including humans, perhaps the most normal is the presentation of a gift to one’s significant other.  Such giving may occur before, during, or after mating, and it often has what appears to our eyes to be obvious value. The presentation of a bundled insect to his much larger female mate by a tiny male spider has obvious parallels in many human cultures, particularly in post-feminist America. The tiny male spider, whilst passing on his genes, might well wish to have a second chance at increasing his fitness, and this can only occur if he presents his beloved with a nuptial gift that keeps her fully occupied for that crucial time period and some critical time beyond the act, so that he may make good his departure from her “web of consumability.”

These nuptial presents are often ranked by value, as the old song title, “Diamonds are a girl’s best friend,” indicates. That title also indicates that some of the most valued gifts are gems, also known as gemSTONES, AKA “rocks”, indicating that they are of geological origin. A few valuable “gems” or similar types of gifts are organic in origin, among them amber, ivory, and pearls. Of these, “natural” pearls, or those formed without human intervention, have historically been the most valuable. Although the development of the cultured pearl industry has made the buying and selling of natural pearls a niche business, the prices of these natural gems his remained well beyond the author of this blog’s limited means.

The only animals capable of making pearls are some of the shell-bearing mollusks, specifically clams and snails. These animals’ shells represent their first and strongest line of defense; basically, the shell is a strong armored wall that acts as protection against almost everything that could try to harm them.  So, even small shell breaks or tiny tissue tears are very serious, possibly resulting in long-term or even lethal problems. As a result, the animal’s first defensive reaction is to immediately seal off such a breach, and then repair its armor.

However, these attempts to repair the damages often result in the formation of a small tissue pocket under the shell encasing a bit of debris: a tiny piece of broken shell material, a bit of grit, a small worm or parasite burrowing through the shell, or something else. The continuous irritation by this foreign material stimulates the underlying shell-secreting mantle tissue lining the inside of the pocket to secrete shell material over the irritant, forming a “concretion.”

In the days prior to cultured pearls, a smooth, spherical, shiny concretion was a pearl. It still is. However, now, in one of the more interesting ways of subverting an animal’s defensive processes for mankind’s gain, the aquaculture industry of culturing pearls has grown into a multi-million-dollar-a-year business, thus proving the perhaps tasty human suitors with an equivalent of a male spider’s appropriate gift of his presumed, and voracious, mate.

Nonetheless, while cultured pearls are perfectly acceptable by most higher primate females, natural pearls still have that special allure. Additionally, while bivalves that may be called “pearl oysters” are found throughout the warm Indo-Pacific, it is essentially impossible for the average guy to stumble across enough of the appropriate kinds of these critters containing enough of the internal goodies to start establishing his own collection to use in the never-ending quest to impress the opposite sex. 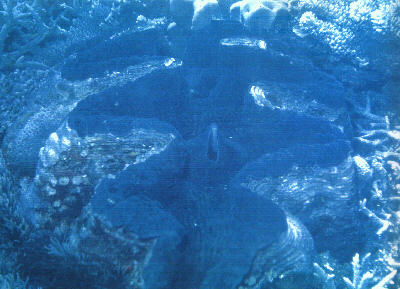 Tridacnaa gigas have produced all of the largest pearls or concretions

It rarely happens, but, sometimes, the fates do smile upon us mere mortal males. About a decade ago, a fisherman living on Palawan in the Philippines snagged his anchor on something in or near a giant clam. He managed to get it and the clam up to the surface, where he presumably cleaned the thing off, and he found he had removed from the clam, a rather sizeable lump of shiny rock. It is a rather light tan to white to beige and is nicely lustrous. It looks rather like a large mass of epoxy putty that was molded and then polished to look like…well, like…nothing other than itself.

Being unique means it doesn’t really have to look like anything other than itself.

Perhaps because he could sell the clam at a fish market, the fisherman decided the rock was a good luck charm. And he did what any decent unmarried fisherguy would do: he brought it home and stored under his bed. Apparently, he gave a significant touch or caress whenever he went out fishing.

Ten years on, after his house burned down, and maybe deciding that the rock was not the lucky charm he thought it was, he showed it to a local tourism authority who identified it as a “pearl.”

Granted, it doesn’t look much like a pearl. But what else could it be, but a pearl? Actually, looking at it from the right orientation, it is easy to see how it could have been formed inside a giant clam, as it really has been nicely molded by the inside of a Tridacna gigas shell. Pending verification of the identification by a certified gemologist and laboratory, probably by X-raying it, among other things, the shell has been temporarily named  “Puerto Princesca,” after the town on Palawan where the fisherman lives.

Most pearls weigh a few milligrams to a few grams. At the upper weight end–nevermind if they are highly cultured pearls with pretensions or pearls of the mere uncultured rabble off the subtidal streets, so to speak–they become relatively expensive, for a few grams of calcium carbonate. One place I looked listed a “loose South Sea pearl, 16 mm in diameter” for  $2,999. Yowza!!!! Three grand for a 16-mm sphere of nacre, or shiny chalk… 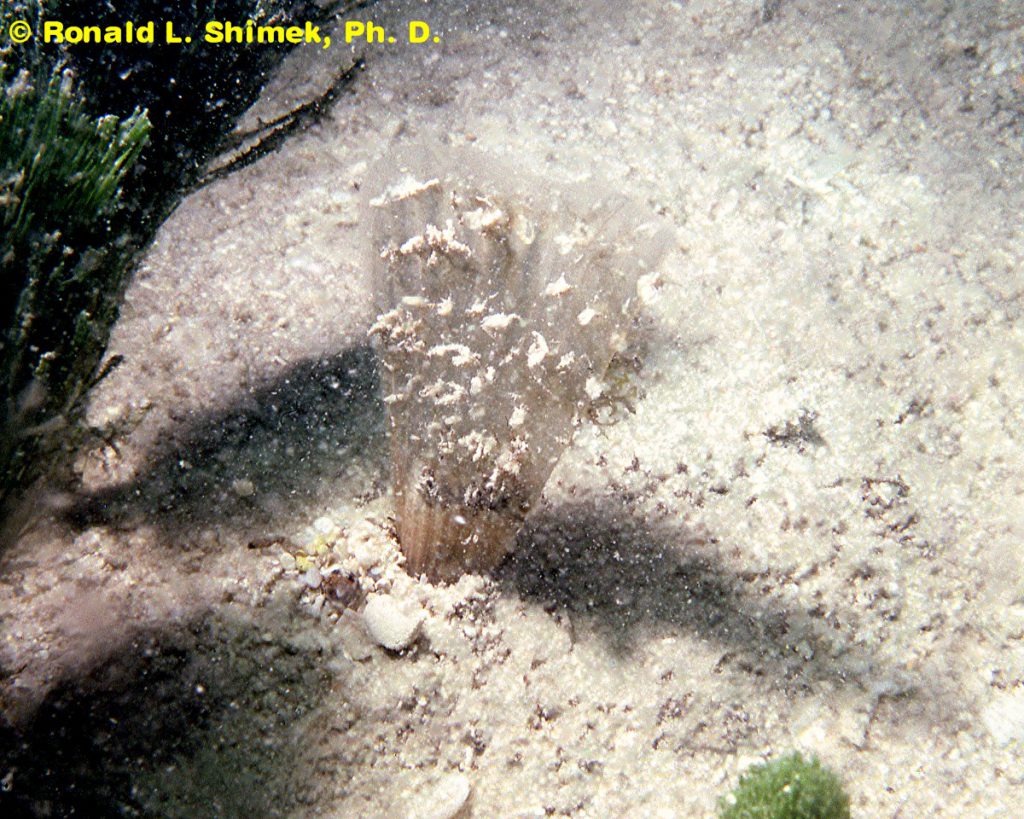 Pen shells often contain pearls that have significant value, particularly in the Indo-Pacific

These pearls are found in everything from Tridacna to conch (Strombus) shells to other clams such as Spondylus, and then fresh water mussels found throughout the U.S., particularly in the Missouri-Mississippi-Ohio River drainages. Many of these are quite expensive if you would like to purchase them. Our fisherman may reassess whether or not his pearl is lucky, as it has been estimated to be worth $100,000,000.  Now, all he has to do is find somebody who has a spare hundred million lying around, and who has a strong desire to own one of Mother Nature’s weirdest oddities. 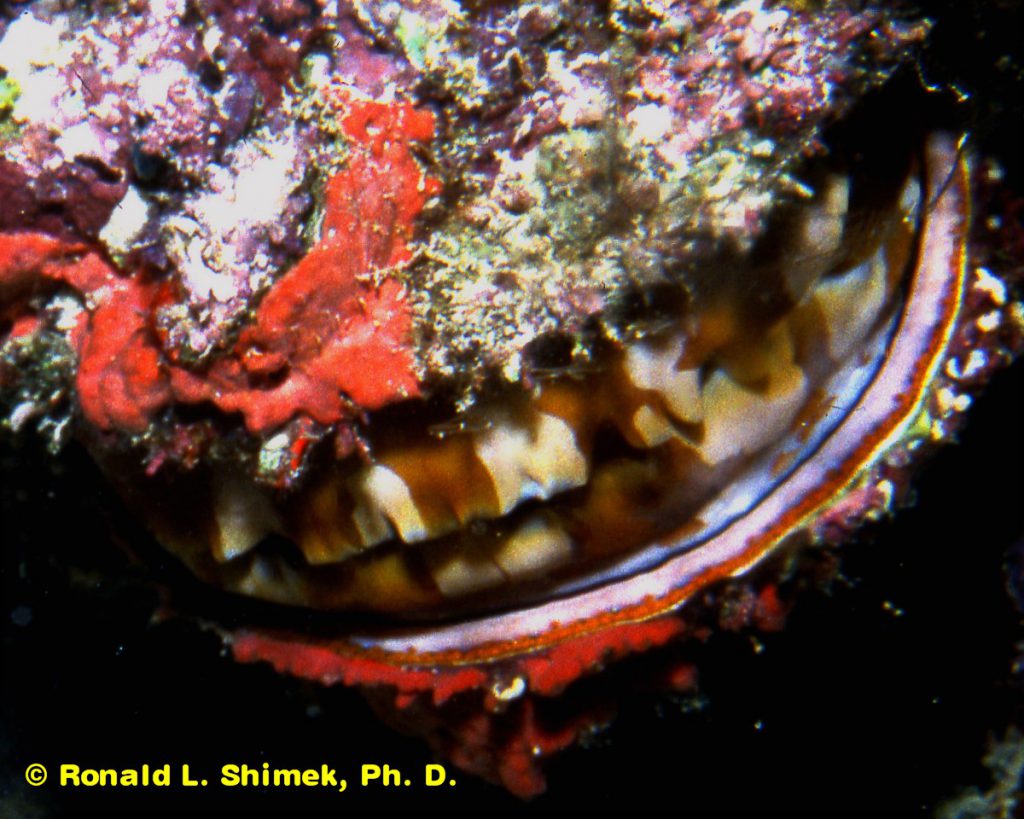 Spondylus scallops occasionally contain colored concretions, AKA “pearls,” some of which are quite valuable

So now aquarists have a real reason to purchase and raise Tridacna gigas: not for the presumed beauty of the animal’s mantle, but for the calcium concretions it may be growing inside itself. Just think, even small ones might be worth a lot.