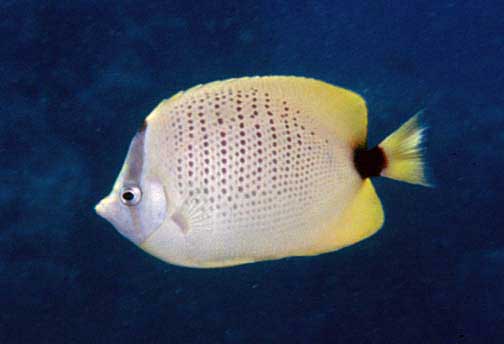 In what is shaping up to be a banner summer for marine ornamental aquaculture, Rising Tide Conservation started this week by announcing success with breeding Centropyge potteri. That success, at the hands of aquaculturist and Oceanic Institute intern Avier J. Montalvo, is already eclipsed by the announcement of his success breeding Chaetodon miliaris, the Millet, Milletseed, or Lemon Butterflyfish, another Hawaiian endemic.

Rising Tide Conservation participants had been chasing down this species for a couple years. Jon-Michael Degidio, working at University of Florida’s Tropical Aquaculture Lab, first reported on efforts to breed the Lemon Butterflyfish in 2013. By 2014, the team was proud to report having reached an age of 44 days post-hatch with the species. But that was where the project seemed to leave it. 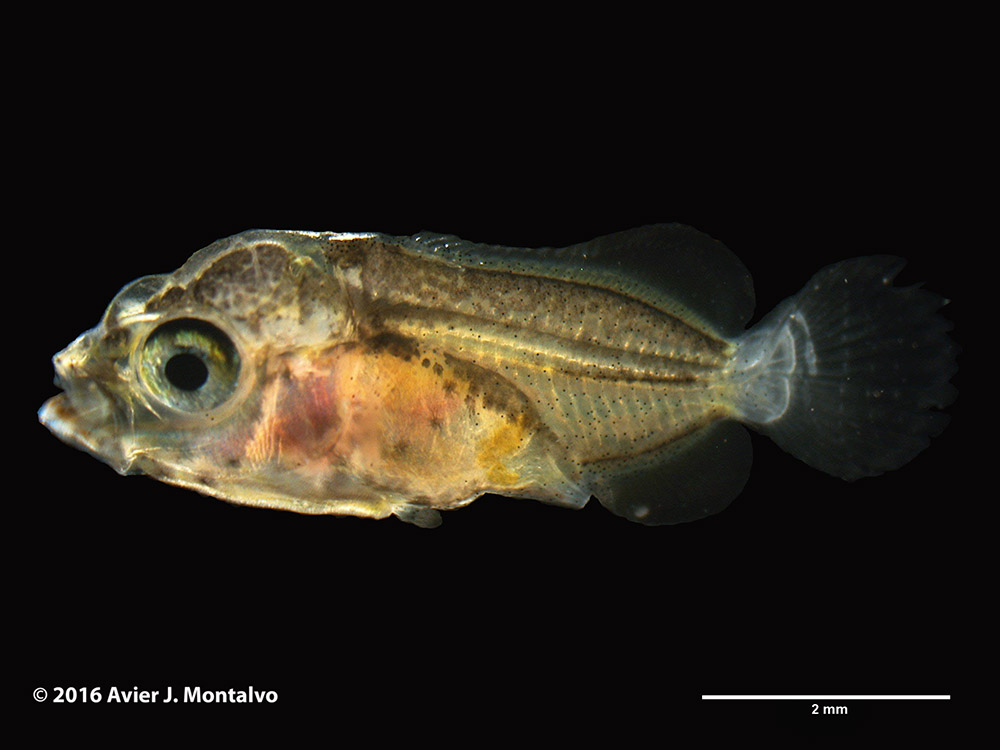 “Despite a somewhat low viability, there was a substantial hatch. At 3dph, the larvae were extremely tiny and it was hard to distinguish between species. Copepod nauplii and background algae were added but no larvae feeding was observed. I figured this was due to relatively cool water temperature, which was approximately 25 degrees C at the time.

“These larvae developed very slowly, and many died off within the first 5 to 10 dph. Upon examining the larvae, all appeared to have fully developed eyes and mouths but many did not have full guts. I wasn’t exactly sure why some of them were not eating, but I continued to feed and monitor accordingly. The water quality checked out fine.”

“I was able to take a few good pictures at 25dph,” wrote Montalvo. “The post-flexion larvae at approximately 6.13mm looked good. Very well developed eyes and mouth, and completely developed guts full of food. Dorsal spines were forming, and there was an increased amount of pigmentation, with a slight deepening of the body. Perhaps the most important observation was that the larvae had already entered their tholichthys stage of development, with bony plates forming around the head extending back towards the posterior end of the larvae.” 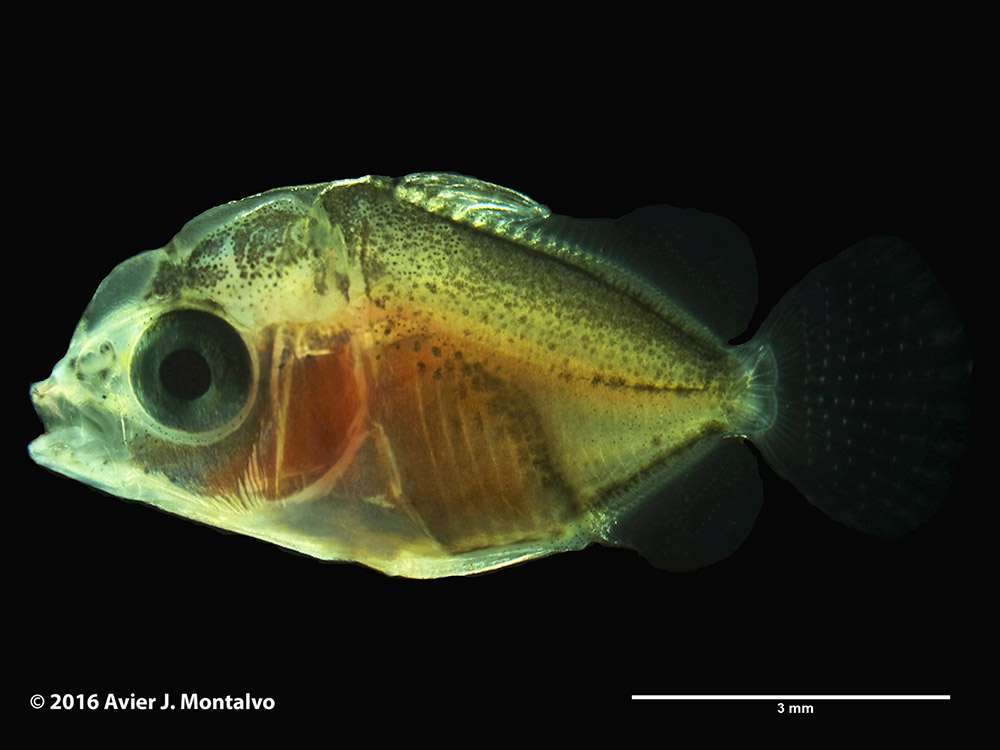 This afternoon, Rising Tide shared the above photo showing the larval Chaetodontid at 40 days post-hatch, writing, “Many of the larvae continued to drop for no apparent reason. We need to focus on good larval development plans. The larvae, pictured here at 40 dph, at a length of 7.02mm, had substantial deepening of the body, and distinct dorsal and ventral spines. Fins were fairly well developed, and the gut still appeared full of food. The larvae were feeding on nauplii, enriched rotifers, and newly hatched artemia. The bony plates, characteristic of the tholichthys stage. were thicker and more prominent. This ‘helmet’ was clearly visible on the heads of the larvae. Some of the larvae were also beginning to exhibit a silvery appearance.”

While Rising Tide asked their audience to guess as to whether the fish could be a wrasse, angelfish, butterflyfish, or something else, observant readers were quick to note that the tholichthys larval stage is most decidedly a feature of larval Butterflyfish, tipping the hat to the family that this species belonged to!

And now, tonight, Rising Tide shared the big reveal, continuing to post Montalvo’s breeding report. “The larvae continued to dwindle down to only a few. By day 60, there was a single lone survivor. There were a few scares with this larvae, particularly when it was nowhere to be found and was thought to be lost (quite a story). However, it pushed through, and settled at approximately 74 dph. For fear of losing this special larvae, I held off on taking any photos until I knew it had completed settlement. By 88 dph, it was clear the mystery Chaetodontid was the millet seed butterfly, Chaetodon miliaris. Its juvenile coloration can be seen in the following photo.” 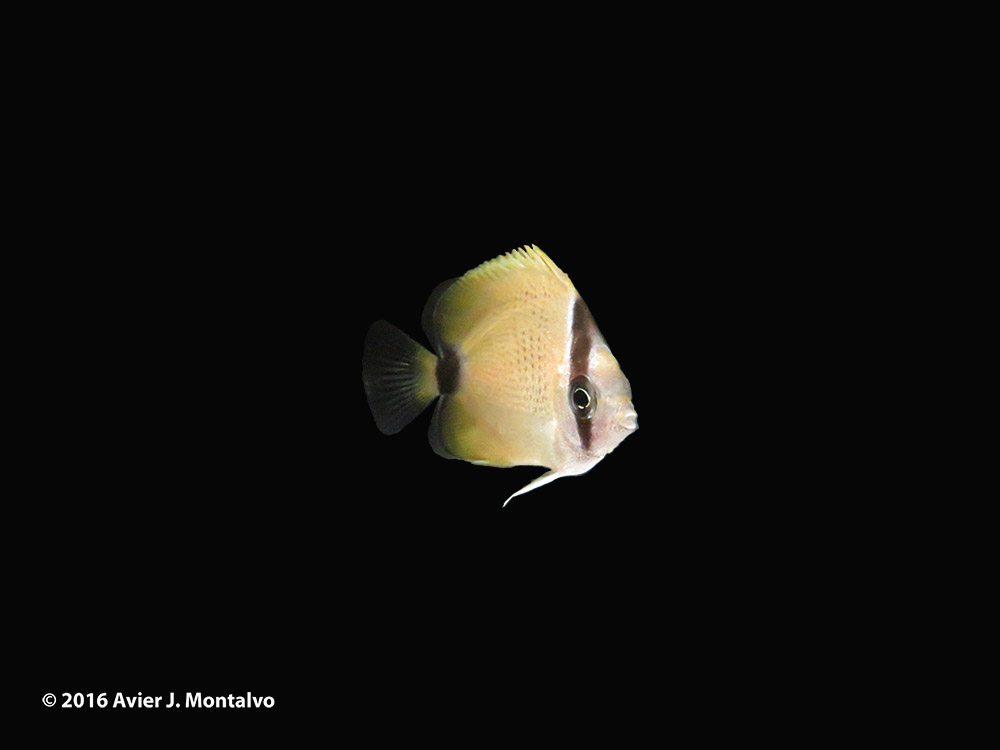 Speaking with Dr. Judy St. Leger, President of Rising Tide Conservation and Vice President for Research and Science at SeaWorld Parks & Entertainment, about the future of this species’ culture, she was optimistic. “There is one other that has [settled and completed metamorphosis]. Not to speak too soon, but after some feeding and other rearing adjustments, collection #12 has well over 50 chaetodontids, many of which are C. miliaris and have settled (at 55dph), so the process has been repeated with improved results! A tank full of newly settled butterfly fish should make for a really cool picture.”

Our congratulations go out to all parties involved at Rising Tide and the Oceanic Institute. Of course, the week isn’t over just yet…