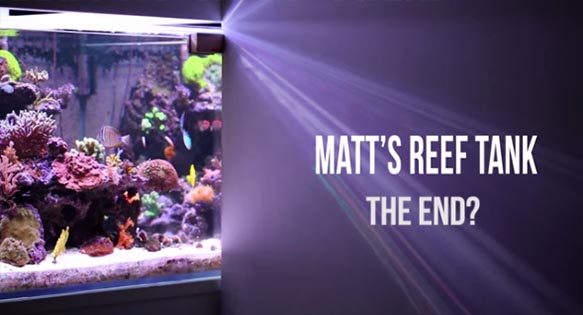 Matt’s Reef, an online video series we were just getting into, went offline in 2014. But the story continued…

Back in 2014, we shared an endearing video series, Matt’s Reef Tank, in which expat Matthew Galat chronicled his life as a reef-keeper in China. Galat had, at the time, uploaded 4 episodes totalling over 80 minutes of footage, but was leaving the reef-keeping behind as he embarked on proposed 5-year worldwide tour on a recumbent bike.

Galat’s plans were cut short; 3 months into his journey, not even out of China, Galat’s trailer and recumbent bike were literally rear-ended and flattened by a truck. Galat suffered a broken clavicle, which scuttled the remainder of the trip. As he puts it, “I have had a 3-month ‘trial tour’ for my trip around the world. I have tested myself and learned how to live on the road. I have also made some mistakes, and can use this forced hiatus to do my best to correct those mistakes.”

While Galat continues to share his life from China via YouTube, he recently dropped us a note to let us know that Matt’s Reef Tank is back! “I actually produced Episodes 5, 6 and 7… after I had an accident on the road and had to return to the office. I am also putting together 8 and 9 that I made after subsequent vacations and climb up Mount Everest. Both are similar… coming home to a tank with trouble…. But I think they are interesting and have some good information as well.”

Galat credits Than Thein, a routine contributor here with CORAL Magazine and Reef2Rainforest.com, as the inspiration for his reef aquarium series. Galat doesn’t claim to be a reefing expert; he’s simply sharing his experiences and opinions and, as he says at the closing of one episode of his series, “If you think I am wrong about one thing or another…that may be true.” No, in fact, the value we see in Galat’s series is that he’s sharing a relatively straight-up, honest, uncensored look at his journey as an aquarist. In fact, we might suggest that any aspiring reef aquarist spend the time to see the highs and lows Galat goes through along the way. You get a candid, realistic look at what you’re signing up for with your first reef tank. If you’re not scared off, there’s hope for you yet!

Indeed, the Matt’s Reef Tank series resumes with one such low point: Galat return to water quality issues and an algae explosion. Watch as he deals with a massive Bryopsis outbreak.

Episode 5 – Cleaning Up After An Algae Explosion

The tank is coming along by Galat’s 6th installment. Galat tears apart the reef in a desperate attempt to capture a rogue Goliath Crab. Things get re-aquascaped, presenting a great opportunity for Galat to share his thoughts on aquascaping and coral placement.

The series continues with Galat giving us a look at his feeding regimes.

After a 17 day trip, Galat and Anny give us a joint look at a “dirty tank.”  Episode 8 includes a bit of discussion around routine maintenance. Stick around to find out what happened to Neil the Eel!

After 2 months at Everest Base Camp, with the reef aquarium left in the hands of the tertiary support staff, we find Galat questioning whether a reef aquarium can be left in the custodial care of someone less passionate than himself. Episode 9 details the problems that occurred during Galat’s absence. Galat examines the aftermath of a “chemical crash,” and we watch as he battles Aiptasia that have cropped up during his time away.

“Fish tanks are a lesson in determination, that’s for sure,” quips Galat. Indeed, Matt’s Reef Tank has had its share of ups and downs. What lies in store for his reef? You’ll have to wait and see if Episode 10 comes out!

UPDATE – Bonus video, Galat is interviewed on TheCoralReefTalk – get to know the man behind Matt’s Reef Tank, and how he got started in the hobby.