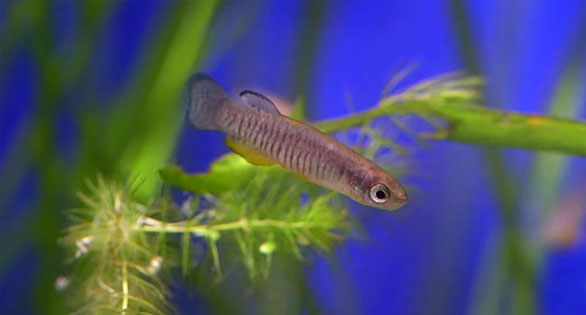 In the forthcoming September/October 2016 issue of AMAZONAS Magazine, we introduce our readers to the plight of the Bermuda Killifish (Fundulus bermudae) and the Lower’s Lake Killifish (F. relictus), both Bermudian endemics, and both considered highly endangered in Bermuda. In “Killifishes from Bermuda,” Lamboj, et. al., report, “Because of the dense population and water use, the quality of [these killifishes’] habitat is being degraded and the number of fishes in the pods continues to decline. A turnaround seems unlikely, at least in the near future.” Still, there is hope, but we won’t spoil the article for you.

The story of these Bermudian Killies brought to mind the work of experts at the Zoological Society of London (ZSL) dealing with a similar situation in Greece. There, it is the Corfu Killifish, Valencia letourneuxi, which is a critically-endangered freshwater subtropical killifish species. It is native to western Greece.

In the video below, Dr. Eleni Kalogianni explains that the species is a “habitat specialist, and it is found in small and very vulnerable freshwater habitats that are under threat, mainly from water abstraction mostly for irrigation, also from wetland draingage, hydro-peaking through operation of dams, but also pollution, for example from agricultural activities, mostly fertilizers and pesticides.”

“Lowland springs in the Mediterranean basin [like the Corfu Killifish habitat shown here] are increasingly under threat because of human use,” reports Brian Zimmerman. Image capture from ZSL footage.

“And finally,” continues Kalogianni, “there’s another threat, a biological threat, which is alien species, specifically the Mosquitofish, Gambusia holbrooki. This was introduced back in the 1920s in the Mediterranean countries to combat malaria through the control of mosquitoes. Today the Mosquitofish is present in more than 50% of the water basins in Greece, and it’s believed that it is a very serious threat for the Corfu Killifish through competition for food and/or aggression.”

“Zoological Society of London (ZSL) has been working for the last 10 years with the Hellenic Centre for Marine Research (HCMR), the Institute of Marine Biological Resources and Inland Waters (IMBRIW), developing a conservation management plan for the Corfu Killifish,” says Brian Zimmerman, Aquarium Curator at the ZSL London Zoo.

Zimmerman outlines numerous conservation strategies to preserve the Corfu Killifish in the wild. As shown in the video below, the main strategy so far has involved translocation programs to increase genetic diversity and create additional populations in suitable habitats where the species doesn’t already exist. The ZSL London Zoo and Kastoria Aquarium in Greece also maintain captive populations of the species, which Zimmerman describes as, “…insurance and a backup plan should there be a major disaster in Greece which wipes them out in the wild.”

If you’re interested in learning more about endangered killifishes, you might find these AMAZONAS back issues of interest: