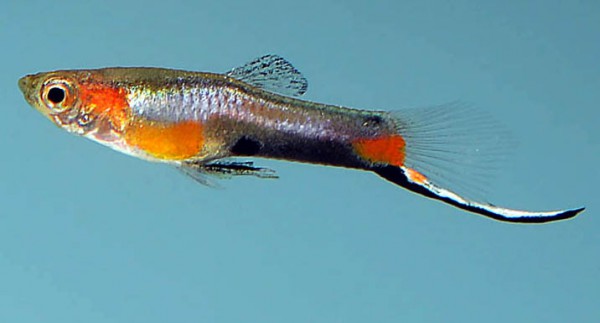 I love that in the aquarium hobby you can literally never run out of new and interesting things to stumble across, and you can never truly “know it all.” Sure, you can have hard-earned expertise in a particular genre of fish, perhaps, but at the end of the day, there is simply so much biodiversity out there that you can’t experience it all in one lifetime. Combine this with the conservation leanings that many aquarists seem to develop as they spend more time keeping aquariums, and I think we take on deeper appreciations for natural forms, and often start to make different choices than simply buying what’s pretty.

I believe many experienced aquarists are starting to vote with their wallets for what we might call “meaningful biodiversity.” The definition of “meaningful biodiversity” is arguably a personal one, but I believe it’s what makes us gravitate to being “cichlid nuts” or “rainbowfish freaks,” devoting swaths of our fishrooms to particular subgroups of fish that we emotionally connect with. It’s the same underlying, intangible drive that causes some aquarists to become very involved in programs like C.A.R.E.S., to personally and actively engage in the Aquarium Ark, to ensure the survival of those little gray fishes that most people in the world don’t know about, and would never miss, should their time on this planet come to an end.

Keeping the Endler Around?

I circle back from this tangent to use it as the basis for why I think Endlers, aka Endler’s Livebearer or Endler’s Guppy, Poecilia wingei, keep gaining attention and tankspace in the aquarium hobby, and why they capture my attention now and again.

Sure, they’re lively and colorful, but the average domesticated fancy guppy easily beats the Endler in an epic smackdown of gaudy, over-the-top ornamentalism. Could it be that the Endler, particularly the pure “N-Class” (pure and never hybridized with Guppies) varieties, represent a more conscientious option for the aquarist who realizes that there’s more to keeping fish than simply the pursuit of ornamental extremes? It seems to me that the ethic of the killifish community is perhaps creeping into the livebearer world and becoming more mainstream. Knowing that we can, theoretically, trace certain Endler strains back to the wild, is a somewhat new concept, given that the classic guppy, which so often is held up as a beginners’ fish, is about as far removed from its wild roots as any tropical fish we could think of.

Yes, there will always be a part of me that looks at an Endler and cynically remarks, “Looks like someone finally found a way to turn feeder guppies into premium big-ticket items!” But joking aside, I need only look at the pace of sales at retail shops selling other N-Class Endlers (such as Red Chest and Yellow Top Sword strains) to realize that these fish have hit prime time. As a breeder, I can’t keep ’em in stock, and the shops I watch can’t either. The rise of planted tanks and nano tanks has only helped further the demand for small, colorful, active fishes, and the almost ridiculously easy-to-keep-and-breed Endler fits the bill. Of course supply and demand rule the day, and local markets vary, but it’s interesting that older wild-strain Endlers are still price competitive with nicer quality fancy guppy strains.

This demand for Endlers helps fuel the Aquarium Ark concept of piscine preservation, which is particularly germane given that some of the initial Endler population strains which entered the more mainstream hobby around the millennium are now thought to be extinct in the wild. The source for some of the older wild-strain Endlers, Laguna de Patos in Venezuela, has reportedly been polluted, wiping out the native Endlers, although it would seem there are some holes in this story.

How Do We Keep Getting New Endlers?

For example, a letter published from Dr. Endler himself, dated as 1995, already expresses concerns over the status of the species in the wild, yet most of our wild Endler strains seem to descend from collections starting in the 2000s. While Laguna de Patos is the type locality of P. wingei, Viviparos.com cites several additional locations within the general coastal, northeastern Venezuela range given for the species; they include Laguna Campoma, Laguna de Buena Vista (Cariaco) Paria Peninsula and Carúpano, Sucre State, Venezuela.”

It is that first “additional” location which is the home of one of the newer wild-type Endlers, the Campoma Blue Star. It was collected in 2011 by Philippe Voisin, his son, Frédéric Nicole, and another unnamed friend, purportedly “under a bridge in Campoma village.” From there the strain was established and has then spread through Europe and then the U.S., Japan, and elsewhere. And along the way, some recently found their way into my fishroom from the fine folks at Geiler Aquatics (ironically, it was as an add-on purchase to some rare Victorian Cichlids I had forever been wanting to try keeping).

The Blue Star phenotype was one of reportedly “thousands of patterns” which were sampled during the collection at Laguna de Campoma, which certainly suggests that Endler’s Livebearers aren’t extinct in the wild, even if their native range may consist of only a handful of coastal lagoons and lakes, which generally raises concerns. In a rare and unexpected find in these modern days, you can actually read about the collection of these wild fish and even see pictures of the foundation stock (reportedly in a plastic cup in a hotel room after collection), as posted by the one of the people responsible for it! An interesting side note: some online documentation suggests additional collections of other Endler phenotypes from the wild, as recently as 2013. Clearly not “extinct in the wild.” However, again, I can see cause for concern, given their apparently very limited range.

Now, you all came here for a photospread, and it’s about time to deliver. Here’s a first look at the Blue Star Campoma Endlers I recently received. Unfortunately, the fact that their tank’s background is blue does them a particular disservice when highlighting their trademark coloration (blue is basically a new color in wild-lineage Endlers). Besides the fact that these breed like rabbits (I already have 10+ offspring in the tank after just a few weeks), one of my favorite aspects of these fish is the determination of the males. The pictures capture this behavior; no, Endlers are not schooling fish! I should probably separate out the girls to give them a break! 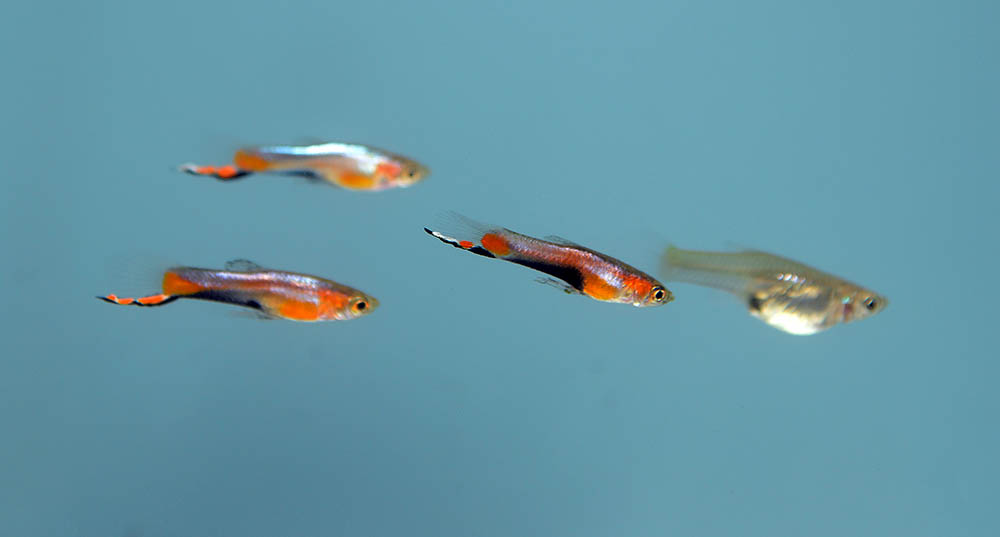 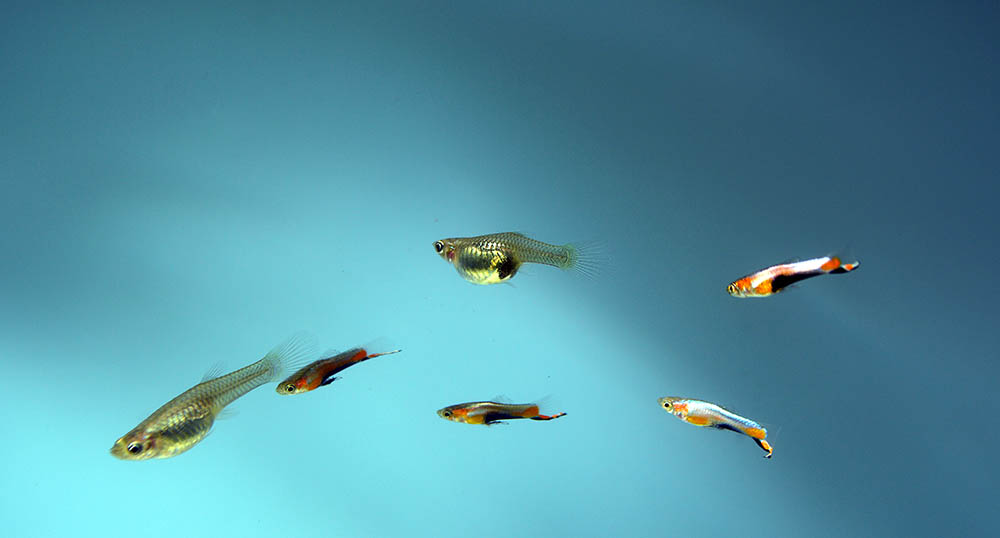 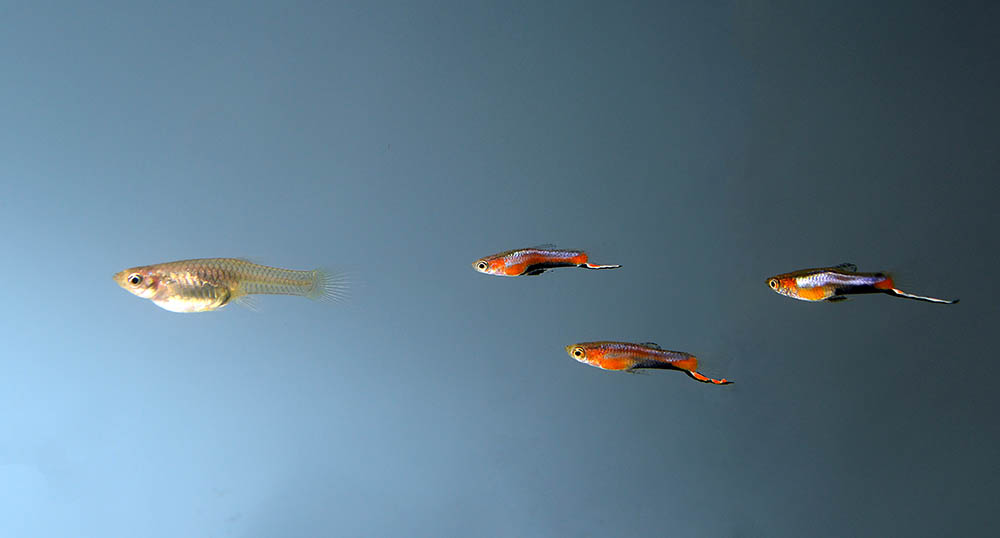 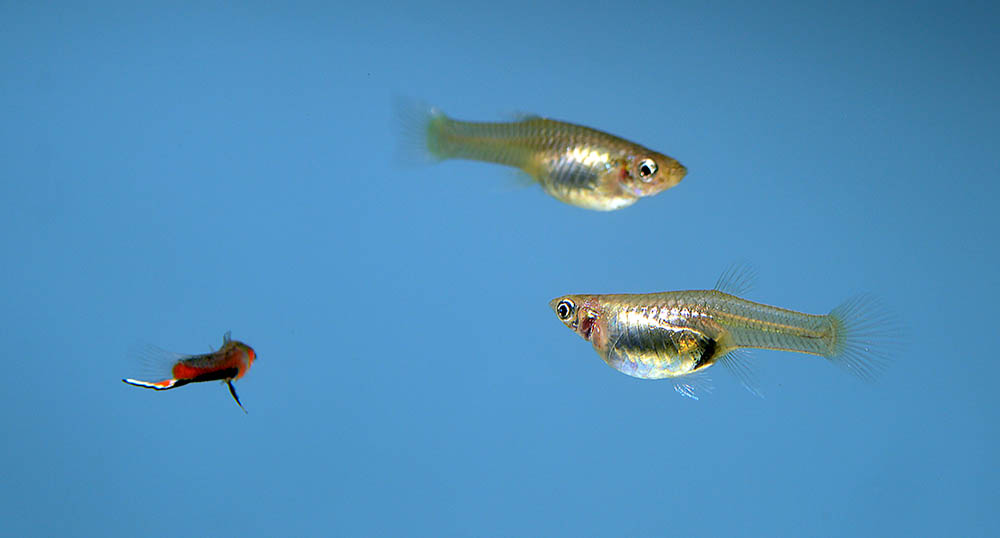 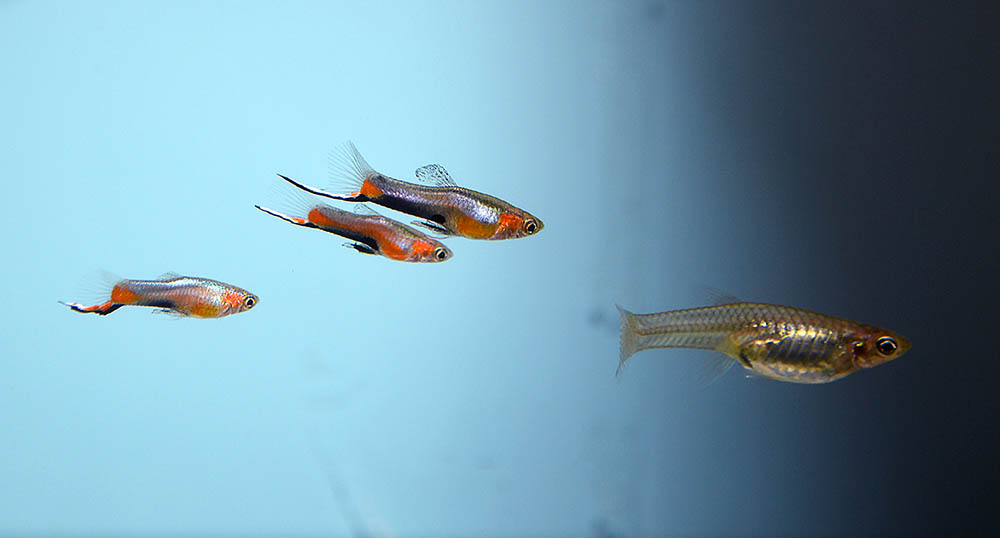 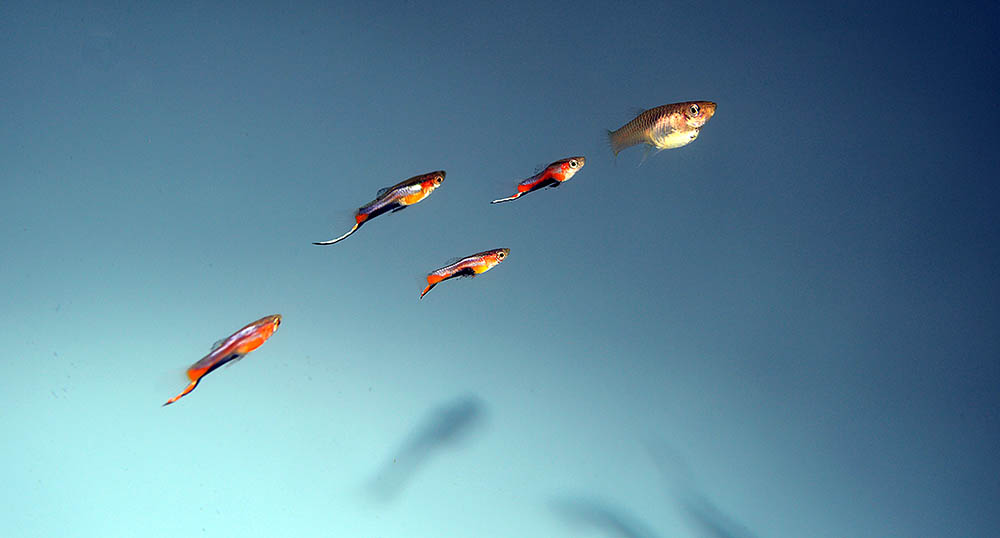 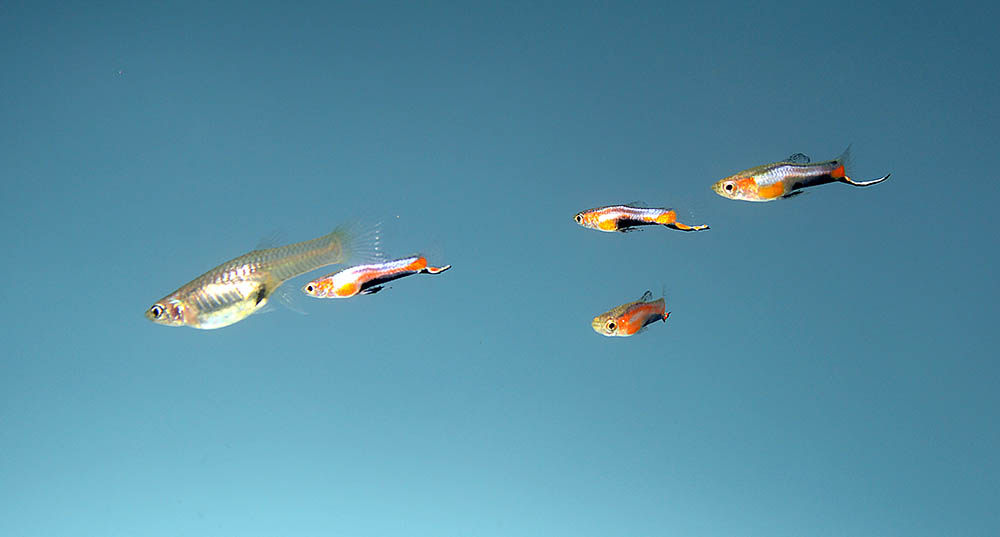 What do you think? Are you keeping and breeding Endlers in your home? Please share your thoughts in the comments!