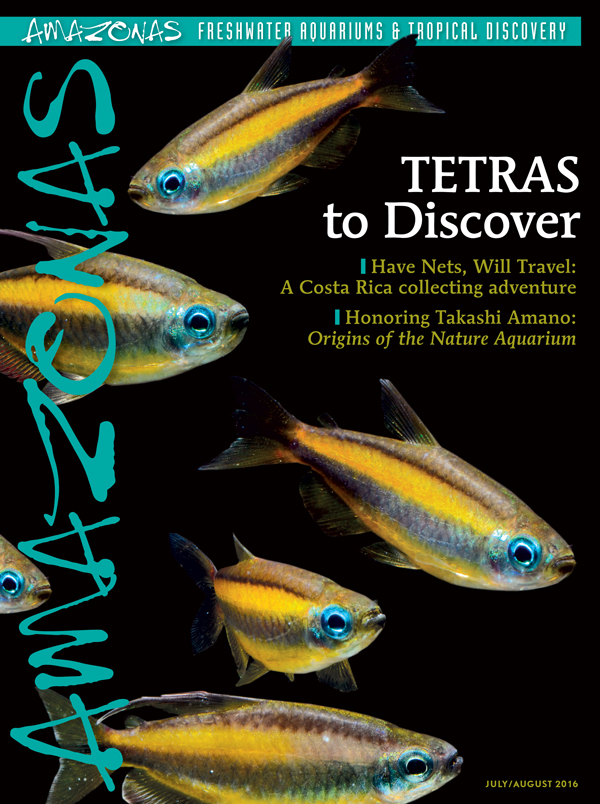 Once a mainstay of the tropical fish trade, the tetras or Characins have either become bread-and-butter fishes or dropped off the radar screens of serious aquarists. Amazingly diverse, the family includes pacus, piranhas, and the dwarf shoaling neon tetras and others—but also an amazing array of bold, beautiful species well worth keeping.

In this inspiring issue, Editor Hans-Georg Evers issues a plea to Discover (or Rediscover) some of the less common choices coming out of South America and Africa:  “No less complicated and confusing is the variety of families that are included in the order Characiformes,” writes Hans. 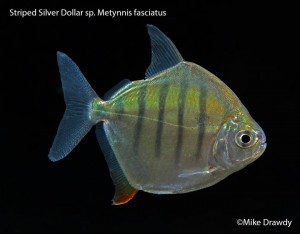 Striped Silver Dollar, bred in Florida, appears as a great alternative to a pacu or piranha. Image by Mike Drawdy.

“The pretty little species in the families of the true tetras (Characidae) and pencilfishes (Lebiasinidae) make up the lion’s share of the hobby-relevant species, but the pacus, piranhas, and silver dollars (Serrasalmidae), the South American darters (Crenuchidae), the headstanders (Anostomidae), and the toothless characins (Curimatidae) are regularly seen in the aquarium hobby.

Although the piranhas and pacus, the freshwater barracudas, discussed by Michael Tuccindardi, and the pike-shaped Boulengerella can make great aquarium fishes—as long as you have a swimming pool—I prefer to deal with the “little folks”—those species that can be kept in a 24-inch (60-cm) aquarium. They have inspired me for over three decades.”

Steve Waldron of Aquarium Zen promises this report: “Collecting Rivulus killies, Blue-eyed livebearers in the mountains of Costa Rica: A travelogue about a trip my wife and I took a few years ago the primary rainforests of Costa Rica where we encountered some beautiful stream fishes in absolutely stunning forest. Some great environmental photography including in situ underwater images of the fish, images of venomous snakes and poison dart frogs if desired.”

And more….   The July/August Issue of AMAZONAS will be arriving in homes and stores during the last week of MAy and first days of June.

MATERIALS DEADLINE For Submissions:  Thursday, MAY 5
TO PRESS:  Tuesday, May 10th

Subscribers can anticipate in-home delivery of print copies around the first of June, followed by email links to the simultaneous Digital Edition.  Subscribe to AMAZONAS or buy Back Issues here.