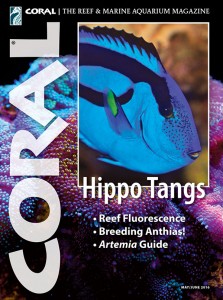 The sequel to “Finding Nemo” is coming to theaters in June, and with it attention and misinformation about the marine aquarium trade and hobby. Look to the next CORAL for Ret Talbot’s investigation into the brewing controversies about “Finding Dory,” as well as Jay Hemdal’s definitive guide to keeping and appreciating Paracanthurus hepatus, the Hippo Tang or Palette Surgeonfish. (Plus an update on HLLE and how to prevent and cure it.)