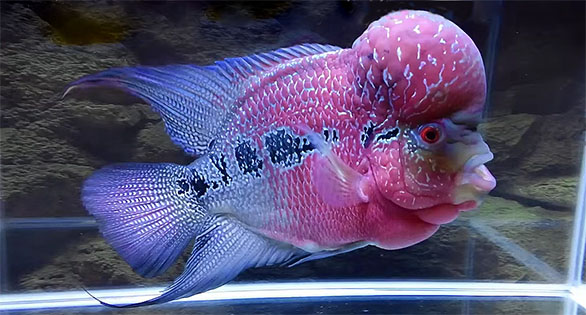 Foo the Flowerhorn: First video is an amazing documentary record of on year in the development of his “kok” (nuchal hump) under the care of a pampering owner.

Whatever you happen to think of Flowerhorn Cichlids, they can put on a flamboyant show—and even learn tricks. The four videos in this collection give some insights into the life of “Foo the Flowerhorn,” and his meticulous, unnamed keeper. This aquarist is a stickler for clean water and excellent husbandry, and it shows in the videos.

How to Train a Flowerhorn to Follow Your Finger

Excerpt:  “Flowerhorn cichlids are ornamental aquarium fish noted for their vivid colors and the distinctively shaped heads for which they are named. Their head protuberance, or kok, is formally termed a “nuchal hump.” Like blood parrot cichlids, they are man-made hybrids that do not exist in the wild. First developed inMalaysia, Thailand, and Taiwan, they became very popular with Asian fish hobbyists. They are also kept by hobbyists in the US and Europe, but their importation is banned in Australia.” (Source: Wikipedia: Flowerhorn Cichlid)

Nuchal Humps: Forum discussion on Cyphos.com of what they are and what functions they perform

Excerpt: One differentiating anatomical characteristic between male and female peacock bass is that male peacock bass develop a prominent hump (see image next page) on their head during the spawn, its purpose is the source of much speculation. Some suggest this hump might serve as a natural weapon, used as a battering ram when engaged in battle with other males and to protect fry and territory. Others suggest that this is a source of protein or fat used to feed developing fry. Dr. Kirk Winemiller, a Texas A & M fisheries biologist and peacock bass expert, suggests that it is a hormonal induced structure that might make the male more appealing to the females of the species such as the mane of a large male lion. (Source: Cyphos.com thread on Nuchal Humps