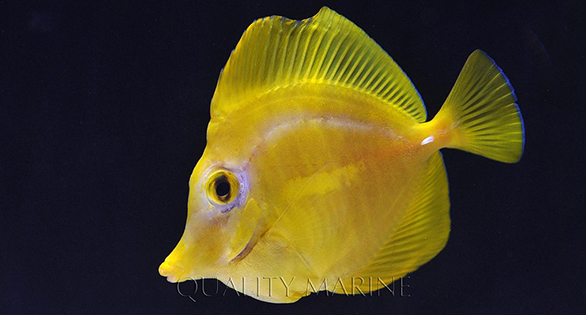 Captive-bred Zebrasoma flavescens the day after arrival in mainland US from Hawaii. Note signs of skin erosion. Image: Quality Marine.

Over the past few months, marine aquarists around the globe have been avidly following the progress being made by Chad Callan and his team at the Oceanic Institute of Hawaii Pacific University to produce the first group of captive born (CB) Yellow Tangs,  Zebrasoma flavescens. With the arrival this week of the first group of these Yellow Tangs to enter the pet trade, came concerns (voiced on the blog Reefbuilders by writer Jake Adams) that some of the fish seem to show symptoms of Head and Lateral Line Erosion (HLLE). Certainly some of the images of these fish do show cranial discoloration, but is it HLLE? 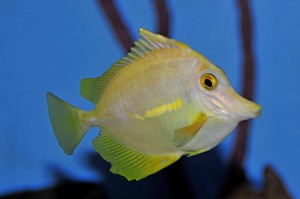 Wild-caught Yellow Tang with HLLE. In this species, fin erosion is the primary symptom. 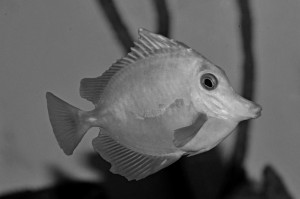 The same image with the color removed shows the HLLE lesions actually involve the entire top half of the fish.

My primary concern was if granular lignite carbon was used on any of the process water that these fish were raised in. We have demonstrated that using carbon will cause HLLE in surgeonfish in 100% of fish under certain conditions: http://coralmagazine-us.com/content/activated-carbon-hlle-smoking-gun-found

Dr. Callan reports, “We did NOT use any carbon of any kind during the rearing process.”

What the affected captive-bred and raised fish seem to be showing is what is termed “epithelial thinning.”  This may or may not be the same syndrome as HLLE, and it may have different causes.  The photographic method and post-processing may also have contributed to the lesions shown in some of the fish.  I’ve seen photographs of wild Black Tangs, taken with flash photography, where they show what looks like classic HLLE lesions, but which is simply due to the camera flash.

“Artifacts of captivity” is a catch-all term to describe anything about an animal that makes it look or behave differently than its counterpart in the wild. We’ve seen this over the years with other captive-raised marine fish; microcephaly, poor coloration and misbarring are all commonly seen in clownfish raised by people who are still working out their protocols. In this case, the issue is purely cosmetic – even fish with typical HLLE live normal lifespans.

My opinion is that all that is being seen is mild epithelial thinning caused by an unknown factor (perhaps transport stress?), and it will likely resolve as the fish are placed into good homes with dedicated aquarists. This is not an issue (as one misguided person opined on the Reefbuilders blog) to call in PETA or cull the fish as other people have suggested. Aquarists need to wholeheartedly support these and other efforts to raise tropical marine fish in captivity, as this is the only way our hobby will survive the current onslaught of bad press we are experiencing.

Dr. Andy Stamper and his team were the first to connect activated carbon with the development of HLLE:  :  http://www.ncbi.nlm.nih.gov/pubmed/22216709