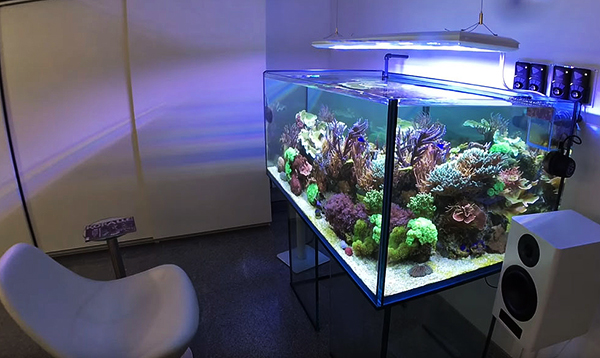 Among colleagues: Matt Pedersen checks in with Koralle Editor Daniel Knop
as his showpiece reef in Germany starts to come of age

Back in August 2015, we gave you a first look at the office reef aquarium of CORAL Magazine’s International Editor Daniel Knop, near Heidelberg, Germany. One of my favorite aspects of Knop’s reef back then was the application of color blocking and the repetitive use of corals to create a vibrant yet natural-looking reef aquarium. Since our last look at the aquarium, the first thing that struck me is how “filled-in” it has become. 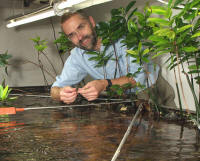 Daniel Knop, founding editor of KORALLE, with one of his large former experimental tanks.

Most recently, Knop published a 21-month look at his reef. Some of the main highlights included details about the removal of green corallimorphs that were causing conflict with other corals in the aquarium. It’s clear, when viewing the video from three months ago to now, that Daniel has removed colonies and done some rearranging; there appear to be fewer individual specimens of some corals, particularly the neon-green Caulastrea. 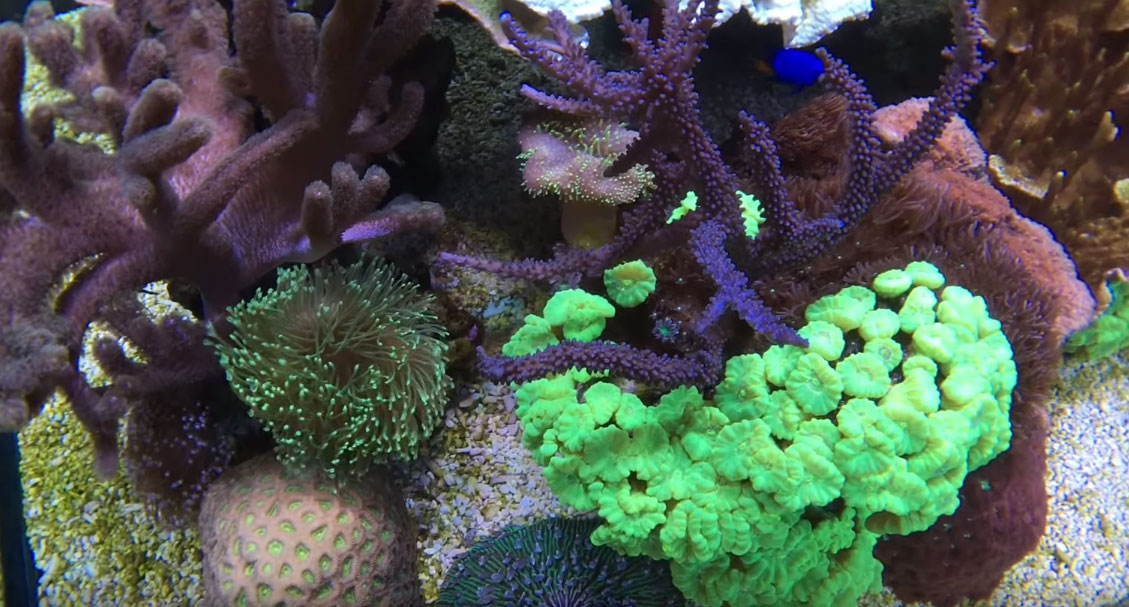 While there are fewer neon green Caulastrea corals (Trumpet or Candy Cane Coral) in the aquarium, and the colonies that are present are larger and more dense.

Knop downplays the look of the aquarium, noting that he “had to re-locate some Montis from the center to the left because it was getting too dense in the center. Therefore things look a bit ugly in the center where I took corals. Also had some battle with the green corallimorphs overgrowing Acros, which have to recover.” I never would have known! 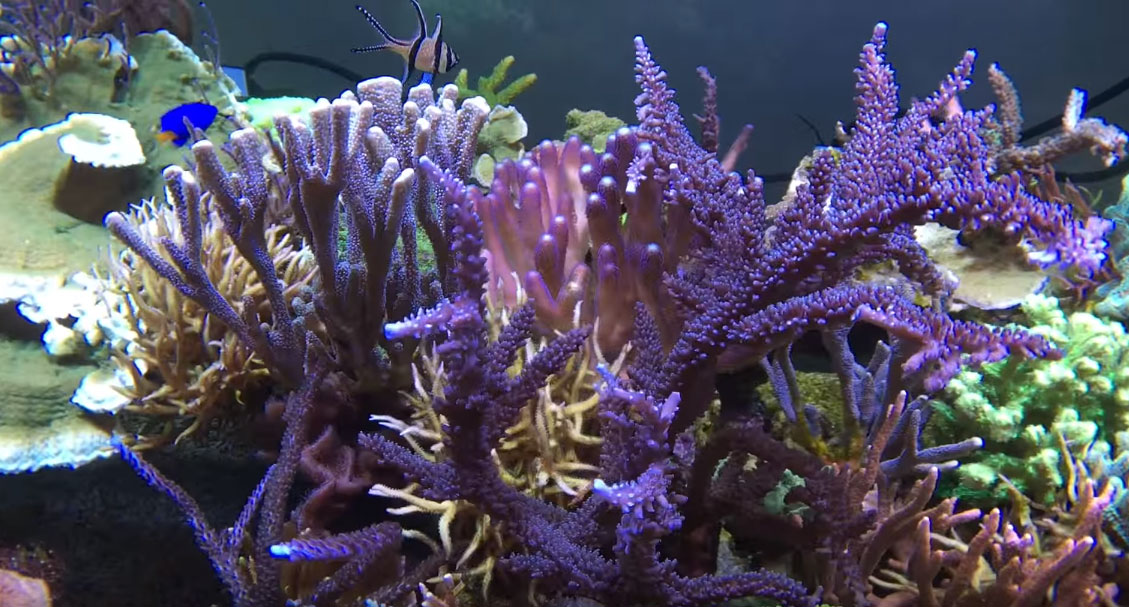 The central portion of the aquarium has been reworked to provide more space for corals to grow.

Knop also noted that the green Montipora capricornis on the left side of the aquarium is “getting real dangerous.” On this, I can agree. While I love how fast Montipora capricornis can grow, making it an exceptional beginner’s coral, it often seems to become problematic in established reefs, given how dominating a colony it can become. (Admittedly, some aquascapers love this.) 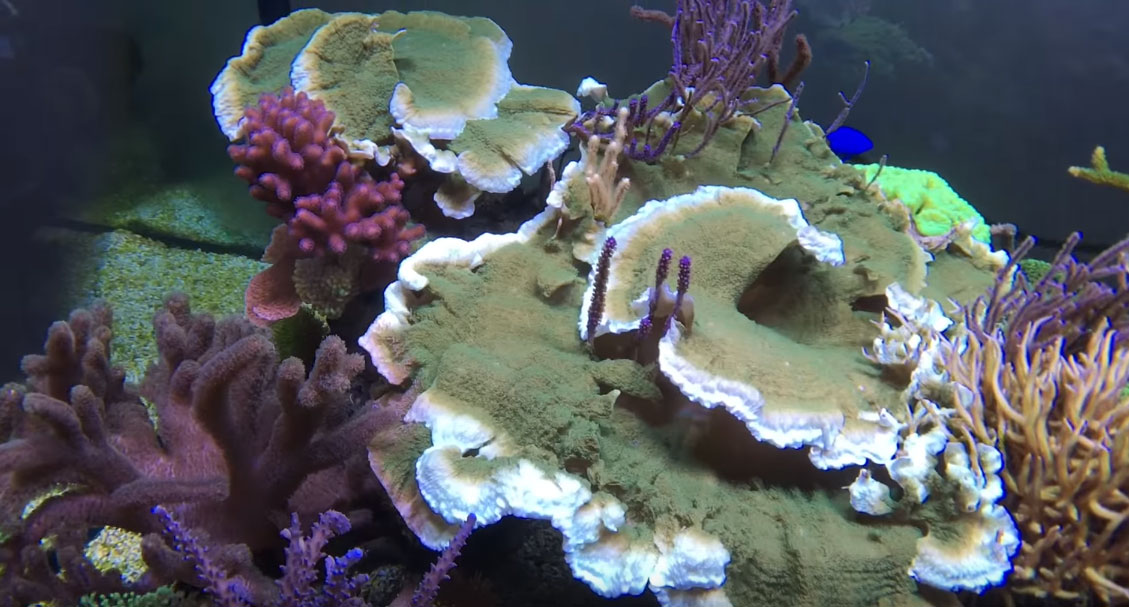 Knop notes that this green Montipora capricornis has officially become “dangerous” – note how it has simply grown around competing corals and gorgonians!

Knop reiterates that everything is growing extremely fast in this new aquarium, and repeated fragging has become necessary. “My frag tank illuminated by a little Giesemann Pulzar is already overstocked,” notes Knop. I have to wonder how much “bonsai” type fragging is ahead for Knop as he attempts to keep coral growth in check. It’s clear he has let corals grow and compete without much human intervention. 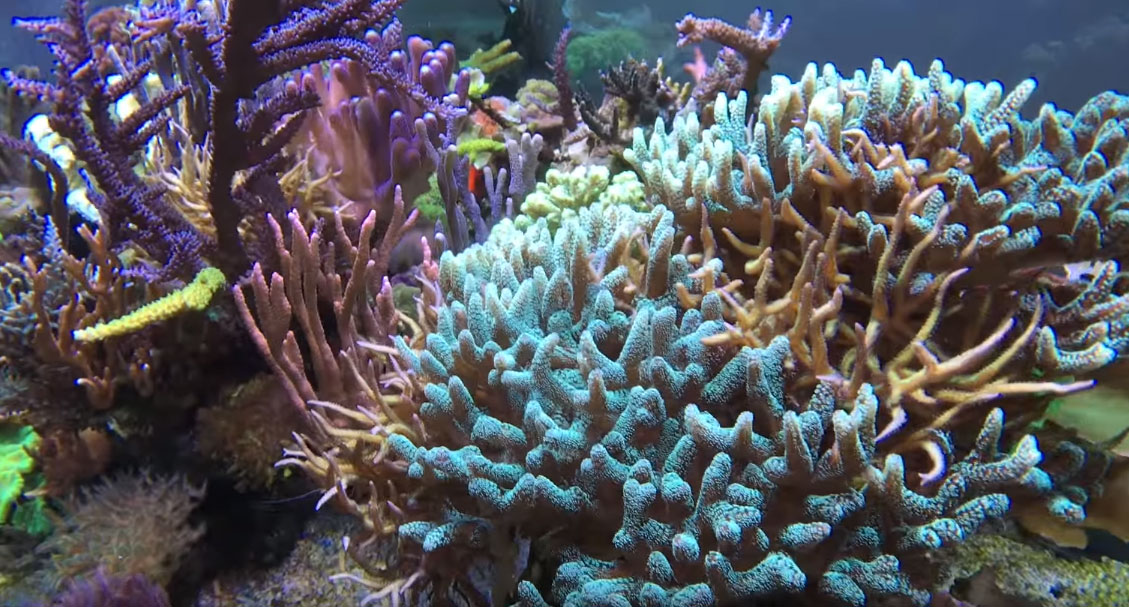 Two distinct types of Birdsnest Corals continue to intertwine and compete as they grow. Will Knop choose to intervene so one coral doesn’t smother the other?

I am truly inspired by Daniel Knop’s reef. It doesn’t seem to feature any particularly demanding corals; in fact, may of the cultivars used are the types of corals I often recommend to beginners. But perhaps there’s wisdom in Knop’s choices. By playing to the strengths of the corals themselves, working with forms that are undemanding and readily cultured, Knop’s reef has quickly filled out into a mature, yet evolving, reef aquarium. I think any of us would be happy to have a productive reef aquarium, this full and grown-in, with less than two years’ effort!

Dive on in, and take a look at Daniel Knop’s reef as it turns 21 (months)!

Knop’s latest video doesn’t include any audio, so feel free to choose your own. Knop might suggest a Bach Piano Concerto performed by David Fray; I might propose the Steve Ottmar Liebert’s Slip Remix or even the live version of Lush.

What would you suggest as the perfect audio accompaniment for a dive in Knop’s Reef? Let us know in the comments!