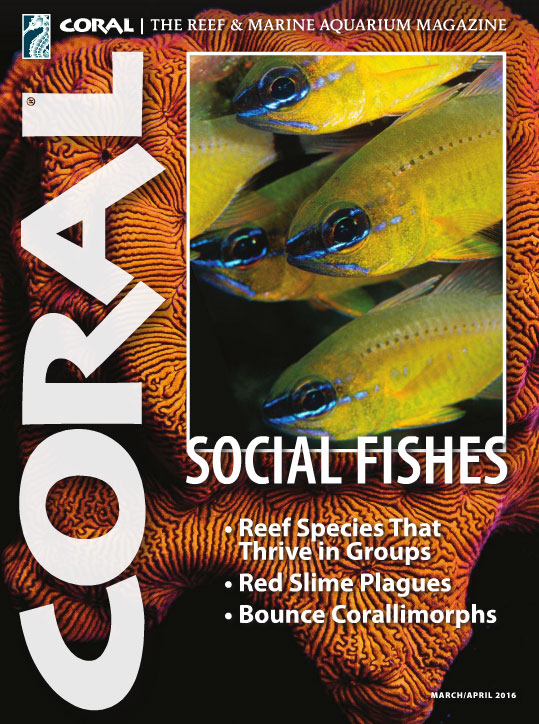 The March/April 2016 Issue of CORAL Magazine is printed and now delivering to print magazine subscribers and local aquarium shops. Here is a sampling of articles and opening pages for readers wondering what the issue will bring. On sale date: March 8, 2016 at the best marine aquarium retail stores everywhere.

Readers of the Digital Edition can log in now:  CORAL DIGITAL EDITION

Paid subscribers can log in with their email addresses for instant access. The CORAL Digital version is available for desktop and laptop computers, as well as smartphones, tablets and Kindle readers. To gain access to the current issue and a deep archive of back issues, become a subscriber by following this link: 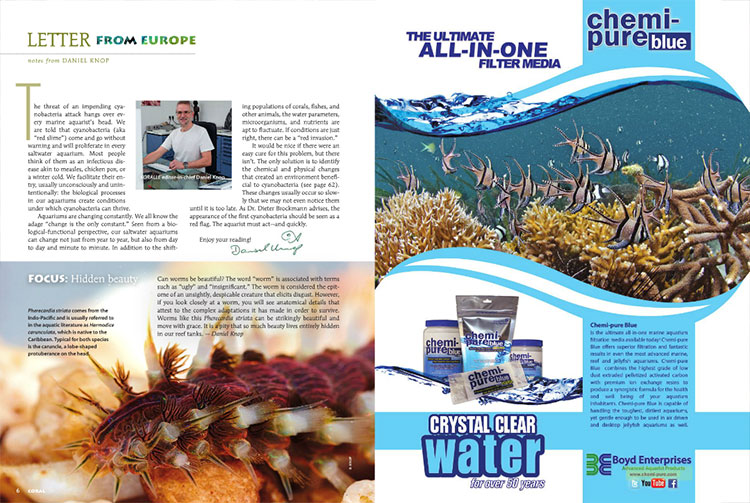 “The threat of an impending cyanobacteria attack hangs over every marine aquarist’s head,” starts Daniel Knop, introducing this issue’s coverage of cyanobacteria, known without affection as red-slime algae. 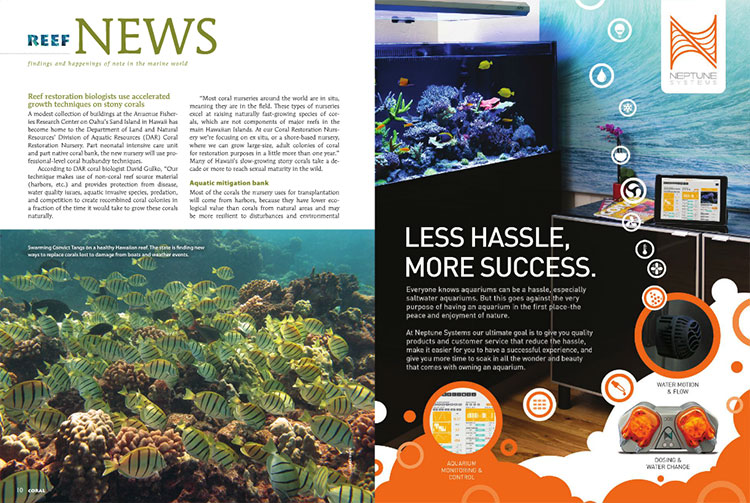 Reef News kicks off with expanded coverage of Hawaii’s new Coral Restoration Nursery. Additional stories include the announcement of a long-awaited captive-bred fish making its industry debut, gene exchange in aquariums, and aquariums as relaxants. News to know and discuss. 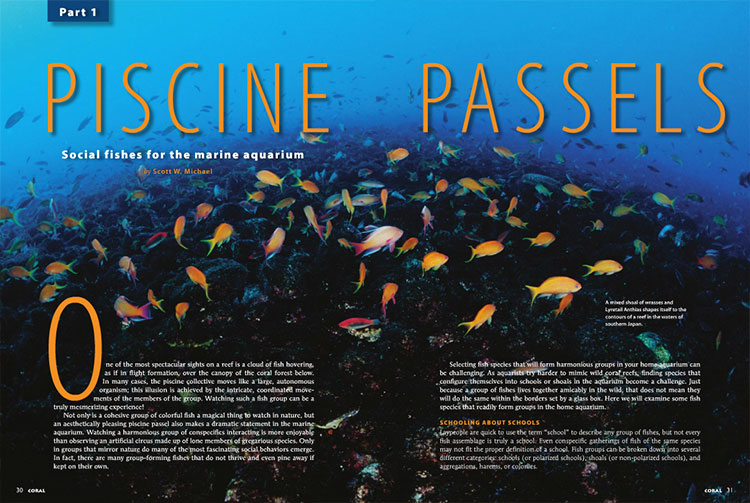 In Part 1 of “Piscine Passels”, Scott Michael shares the Chromis, Flagtails, Fusiliers, Cardinalfishes and Dartfishes that form groups in home aquariums. More to come in Part 2! 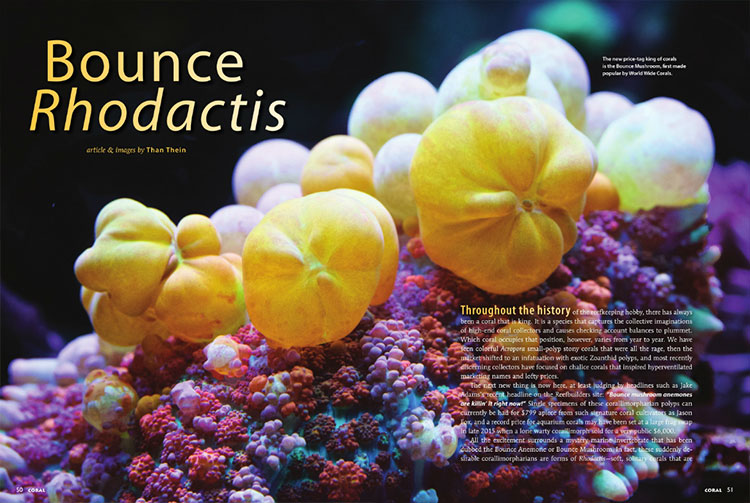 “Bounce Mushrooms”—forms of solitary Rhodactis corallimorphs,—are all the rage. Culturist Than Thein of Tidal Gardens looks at their allure, and asks “what’s next?” 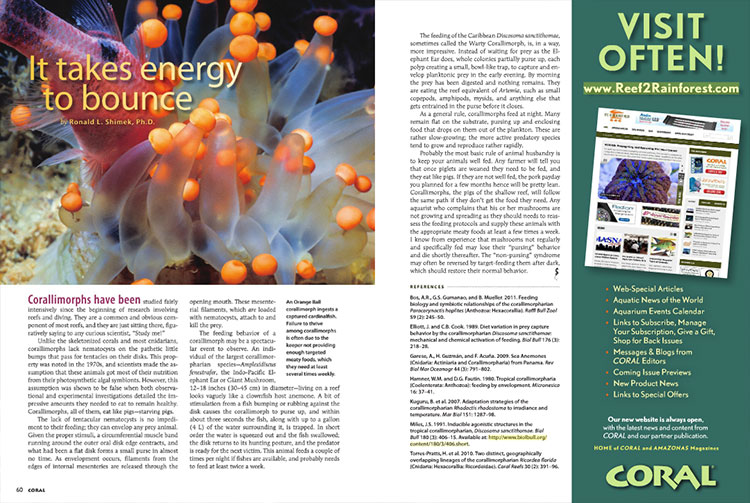 Invertebrate zoologist  Dr. Ron Shimek eyes the feeding behaviors of corallimorphs, says “they eat like pigs,” and notes “It Takes Energy To Bounce.” 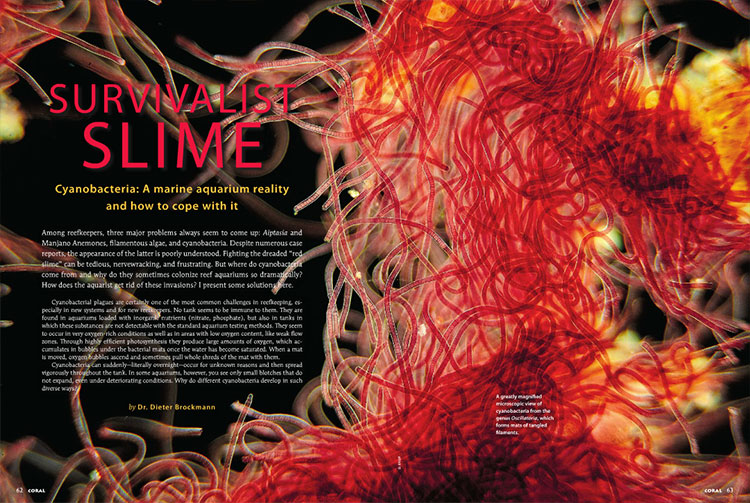 Dr. Deiter Brockmann gives us everything we need to know about battling cyanobacteria in “Survivalist Slime – Cyanobacteria: A marine aquarium reality and how to cope with it.” 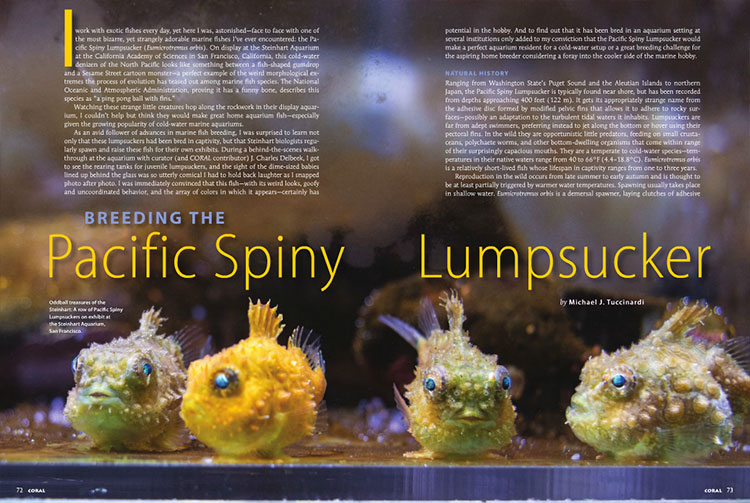 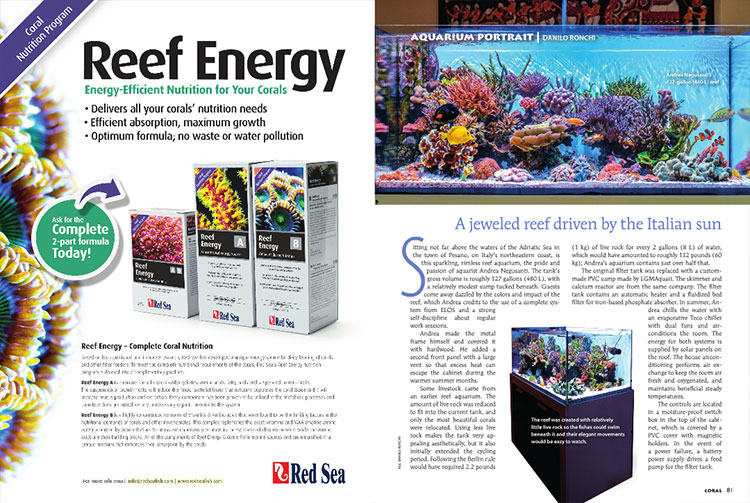 This issue’s Aquarium Portrait looks at a stunning 127-gallon reef aquarium on the Mediterranean coast maintained by Andrea Negusanti, as shared with us by Danilo Ronchi who covers cutting edge Euro-marine aquarium subjects. 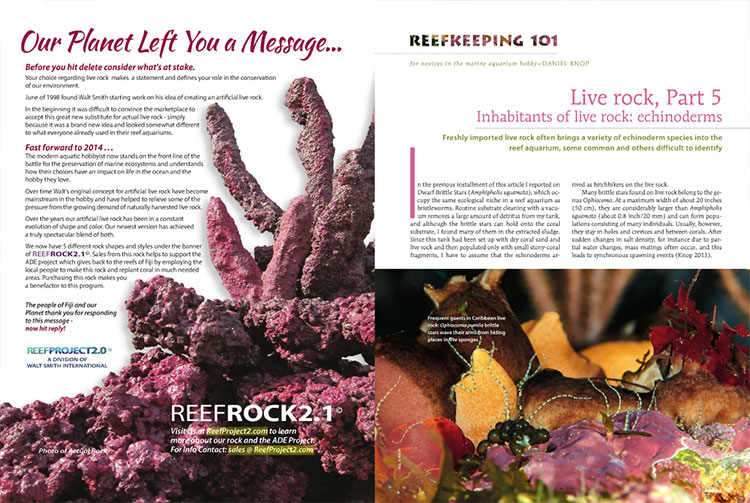 Reefkeeping 101 by Daniel Knop looks at a few common and very rare echinoderms that hitchhike their way into our aquariums. 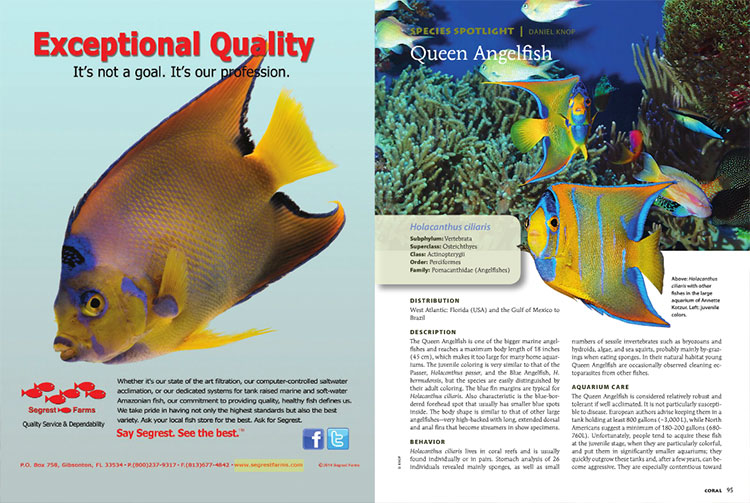 Daniel Knop looks at the iconic Queen Angelfish in this issue’s Species Spotlight. 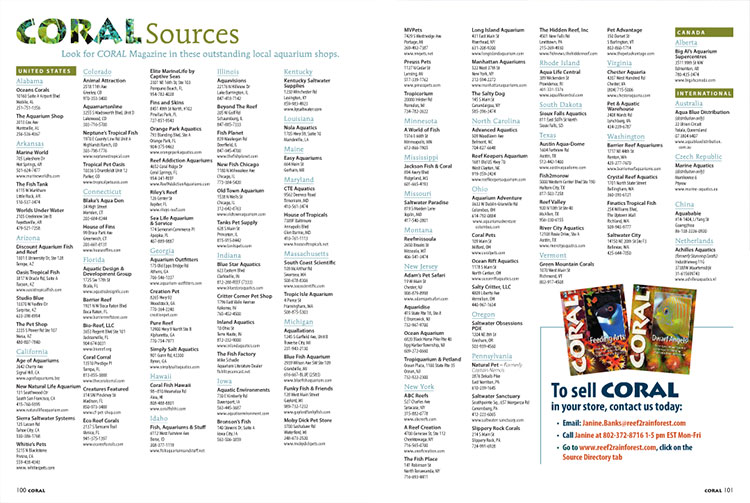 Looking for a great local aquarium shop? You’ll find some of the best happen to also sell CORAL Magazine! Check out our source directory, in print and online. 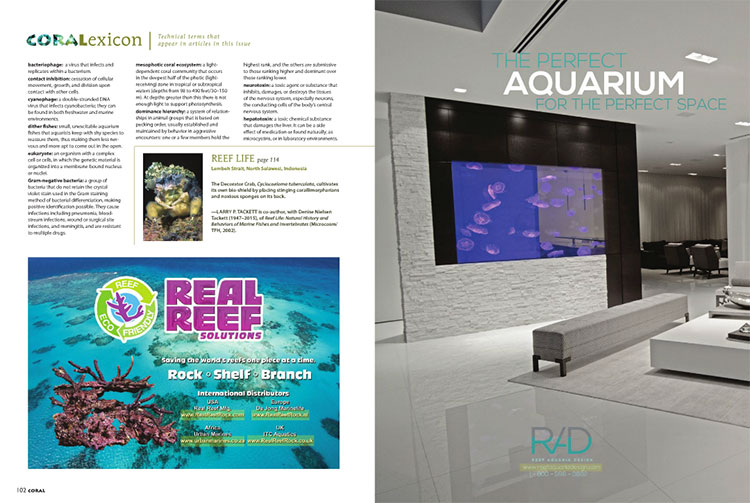 Smart readers know that treasures often lurk in the back pages of each issue, from words that stump even experts to ads that should not be missed. 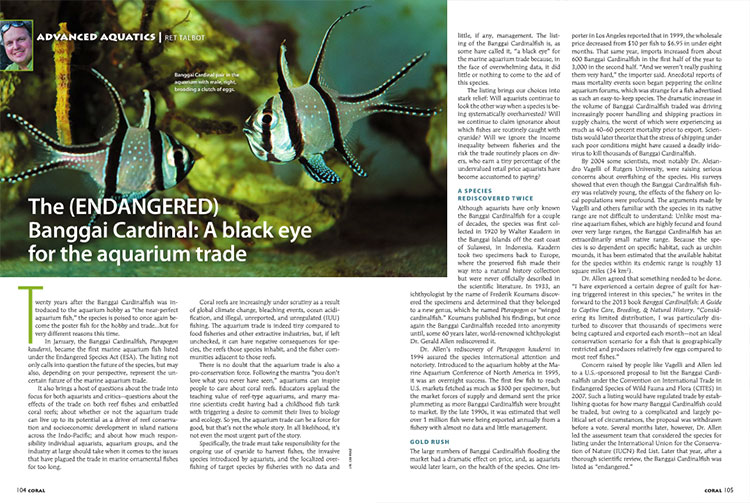 Ret Talbot examines the aquarium trade’s new “black eye” in the U.S. listing of the Banggai Cardinalfish as an Endangered Species. 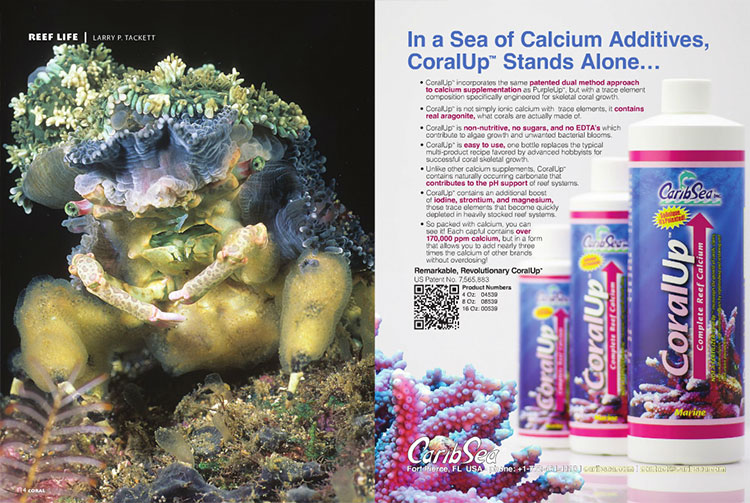 What exactly are you looking at in this issue’s Reef Life photo from veteran underwater naturalist Larry Tackett? Find the answer on page 102.

• Already a subscriber? ACCESS The Issue Now!
CORAL Subscribers can log in with their email address and read the Digital Edition and App Editions immediately.