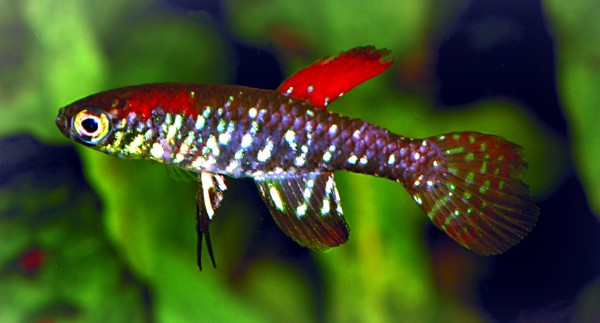 A male Plesiolebias altamira. If not already lost, it and a second species from this island may soon be extinct in the wild. Photo: M. Schlüter.

“Arapuja is being deforested by the project entrepreneurs without any forest management or wildlife rescue.”

Annual killifishes are extremely well adapted to surviving wet and dry seasons in their unique environment, but if this habitat undergoes fundamental changes there can be major consequences. For two exceedingly rare killifish species from the Brazilian Rio Xingu, it is probably already too late. The culprit is man, sanctioned by government.

The Xingu River in central Brazil is the site of one of the greatest environmental crimes for which the Brazilian government and foreign investors are, by all accounts, responsible. According to Antonia Melo, coordinator of the Xingu Vivo Movement, forest clearing on the island brutally threw open the enormous environmental impact of Belo Monte by irretrievably destroying one of the most beautiful views of the river from the port of Altimira.

“Like all the islands of the Volta Grande do Xingu in the flooding area of ​​the future reservoir Belo Monte,” he claims, “Arapuja is being deforested by the project entrepreneurs without any forest management or wildlife rescue.”

“The most terrible part,” said Melo, “is that these killers are carrying out this massacre without any monitoring by animal rescue groups. Today the island dawned with the sky blacked by buzzards, like a swarm. It is simply desperate to see this crime being committed right in front of us. So we went to protest, denounce.”

A giant complex of dams to generate electricity is being built, turning part of the Xingu into a huge artificial lake and significantly reducing the flow in a big bend in the river known as Volta Grande. The Belo Monte dam is predicted to destroy a habitat that is home to many endemic species, including the famous Zebra Pleco (Hypancistrus zebra). 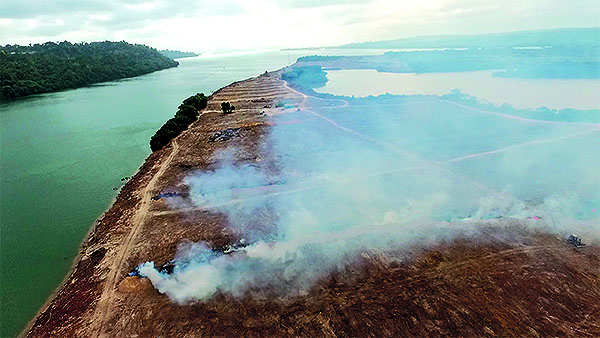 An aerial view of Ilha do Arapujá, a large island in the Xingu River, mid-September 2015. The forest was burned so that the island could be flooded. Photo: M. Sabaj-Perez

The drying riverbed has already been claimed by Belo Sun Mining, a Canadian gold-mining company, which hopes to produce 205,000 ounces of gold annually for 17 years if the company can resolve the regulatory issues with the Brazilian government. Thousands of indigenous people have already been displaced by these projects. Hundreds of species of endemic fish and other animals will become extinct or, at the very least, greatly reduced in number. We have already reported many times about this tragedy over the past few years.

In addition to the very popular armored catfishes, a number of other species, including some cichlids and tetras, are dependent on the rapids at Volta Grande. Other habitats will also be destroyed.

Across the city of Altamira, where the artificial reservoir will be created, is a large river island called Ilha do Arapujá, the only known habitat of two annual killifishes: Plesiolebias altamira and Pituna xinguensis. These species were scientifically described by Costa and Nielsen in 2007. It is thought that both species live in temporary ponds on the island that contain water during the rainy months (October to April) but dry up from May to September. This is their only known habitat; they have not been encountered anywhere else. 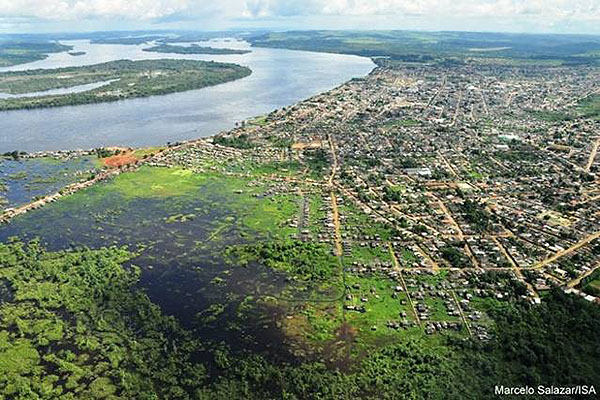 Port of Altimira on the Xingu River, with island to the left, prior to recent clearcutting. Image: Amazon Watch.

In early September 2015, the entire island was cleared of trees to prepare for the flooding of the reservoir. The island will probably be completely flooded in the process. This would destroy the unique habitats on the Ilha do Arapujá, leading to the inevitable extinction of Plesiolebias altamira and Pituna xinguensis in the wild.

Xingu Vivo Movement:  The murder of the most beautiful island of the Xingu (in the eyes of Altamira) Translated Page

Editor: AMAZONAS Senior Editor Michael J. Tuccinardi has recently visited the Rio Xingu and will report more fully on the situation in the May/June issue of the magazine.