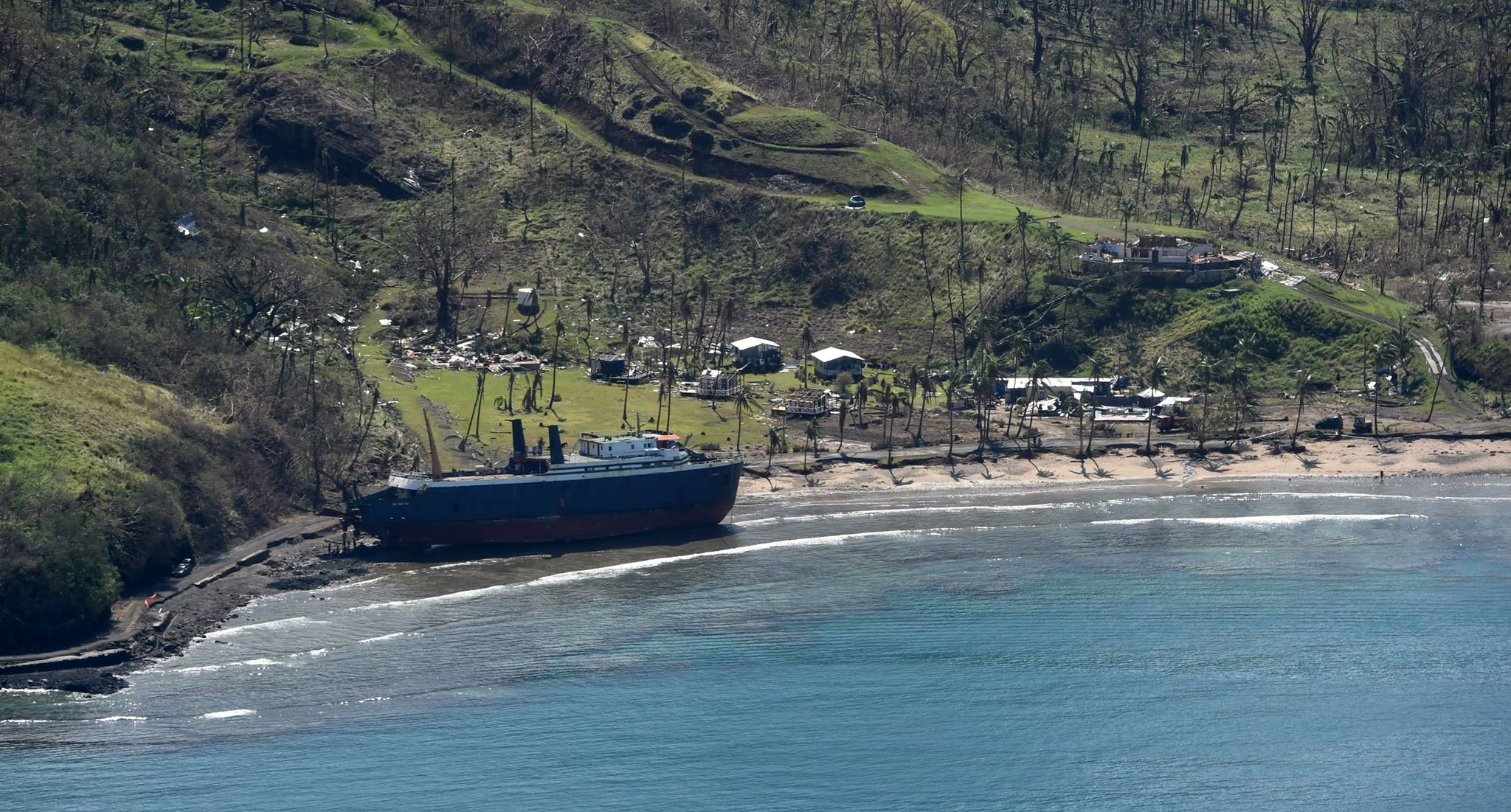 In the wake of Tropical Cyclone Winston, a large boat, possible identified as the “Sinu Wasa II”, rests on the beach in front of washed out roads and gutted buildings in the city of Toki, Fiji. Image by NZ Defense Airforce

“Well Cyclone Winston was one nasty dude, flipped over one of our smaller boats that we had hauled out… but beyond that our facilities are ok. Lots of fallen trees and power lines around town. Our shipping is on hold until further notice as flights have been canceled. Our thoughts and prayers go out to everyone in Fiji. We weathered one of the strongest storms on record and the strongest to hit Fiji in recorded history.” – Walt Smith International, February 20th, 2016

On February 20th, Tropical Cyclone Winston, a devastating Category 5 storm, ripped through the island nation of Fiji, uprooting trees, destroying coastlines and leveling homes. Many in the aquarium trade have personal connections with residents and businesses in Fiji, and we all waited to hear how our business partners, friends and loved-ones fared on the other side. 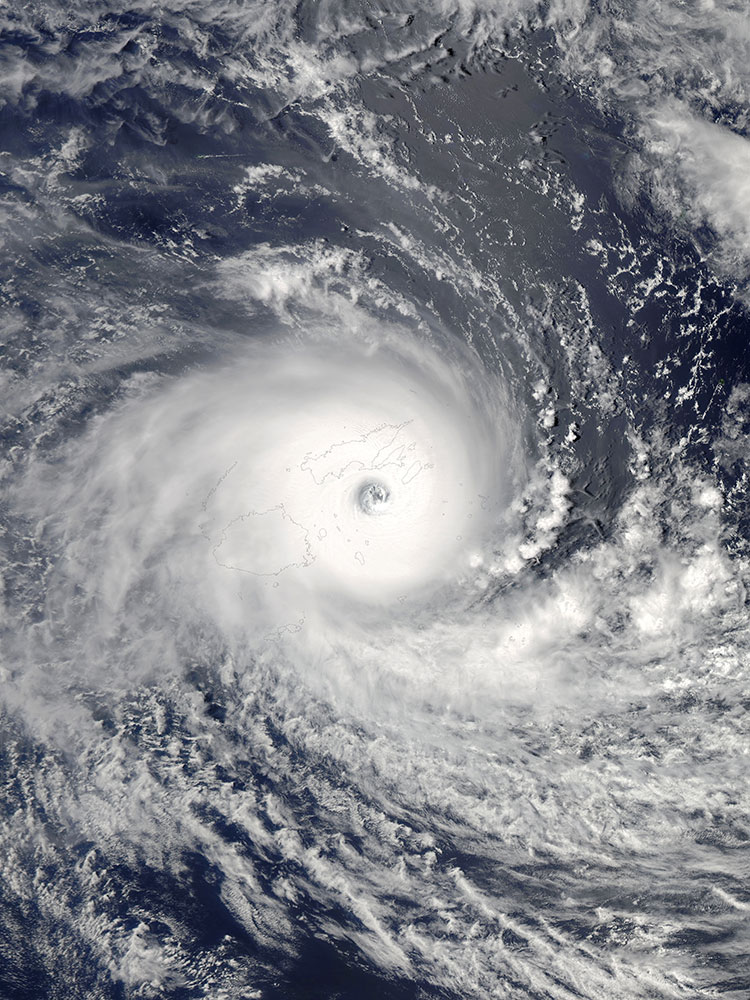 The Aqua satellite captured this picture of Severe Tropical Cyclone Winston at 01:30 UTC on 20 February 2016, during peak intensity and striking Fiji. Winston becomes the strongest storm to make landfall over Fiji in history. Image by NASA

In the days that followed, people started checking in through social media with varying reports of how they fared. “The storm was bad but we got the light end in our side. Mainly only trees down and flooding. Other parts of the island got ******”, wrote Dave Barrick, Livestock & Aquastock Manager for Walt Smith International, based in Lakota, Fiji.

Jessica Timko, a marketing and brand solutions provider to many aquarium trade companies, had emigrated to Fiji just weeks before the storm. Her first report from Savusavu, Fiji, in the wake of TC Winston: “I have no power and no water. Just got limited cell service last night. I collected about nine 30-gallon barrels of rain water off my house today for washing, drinking, and toilet flushing. The cleanup is well under way. The tree that fell on my house has been cleared out and we’re working on cleaning up the dive shop and the neighbor’s places. More to come later.” 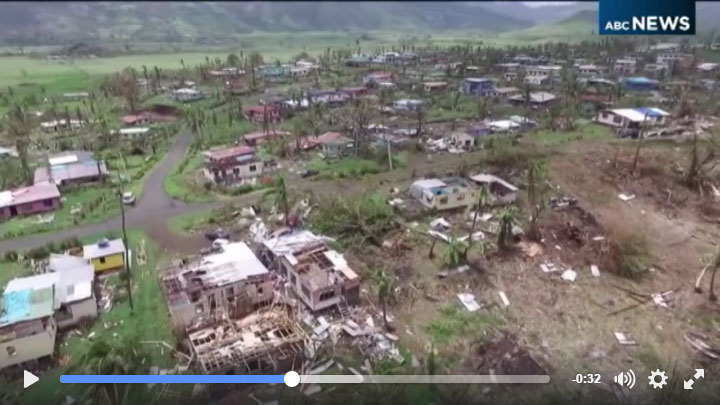 Mainstream media currently reports 42 dead as of February 25th, 2016. Some 35,000 Fijians are in shelters (see Huffington Post story), with some small villages seeing total destruction of every house.

Fiji is considered a “middle income country,” with a 2014 per-capita GNI of $4,870 USD according to the World Bank. While being considered one of “the more developed Pacific Island economies,” over 35% of Fijians were considered to live in poverty in 2008. As Algazeera reporter Andrew Thomas notes that “in a place where no one is insured, there is a common plea”: ‘I need help from the government to rebuild my house so I can start my life again with my family,’ said Fijian Frank Simmons, a farmer.

The Fijian Government with support from New Zealand and Australia have been working quickly to bring relief to the plight of Fijians in the aftermath of Winston.

The Fijian Government’s Facebook Page has become a direct link to the island nation, documenting both the devastation and relief efforts in nearly real time. Aerial photos taken by the New Zealand Defense Air Force present a true sense of the magnitude of destruction that Winston inflicted upon Fiji (see these albums – Devastation by TC Winston in Maritme Islands, Aerial survey of Vanuabalavu, Day 3 – Aerial Photos of Maritime Communities, More Devastation from TC Winston in Maritime Communities, and others…)

On February 23rd, 2016, the Fijian Government uploaded this image and request for assistance to their Facebook page.

Video footage of cleanup and relief efforts continues to arrive from Fiji as well.

Following up today via internet chat, Barrick reported current conditions on the ground in Lautoka. “…lots of devastation around the entire island(s), still people have not been heard from. We have accounted for all our employees but are still assessing their damages. Some areas have not even gotten support yet as there is too much area to cover and getting around is still hard. Our area was hit hard but not half as bad as other parts. Our staff some come from the harder hit areas have not been able to make it to work. Most still have no water or power and some won’t get anything estimated until maybe the end of May. Some of our area is with power (warehouse now), but power is off and on while they repair lines. Support from other countries is coming in as far as food and money, but I’m not sure how they are going to distribute it yet.”

Predicting that need will be great, Walt Smith of Walt Smith International has launched a GoFundMe campaign to raise funds for WSI employees. “Some of our loyal staff did not do so well and their suffering ranges from roofs torn off and missing to total devastation with homes and belongings completely destroyed,” reports Smith. “We are currently looking at ways to monitor the funds already received into a special account and also establish a “most needy” list to offer these generous donations to some of our staff.” 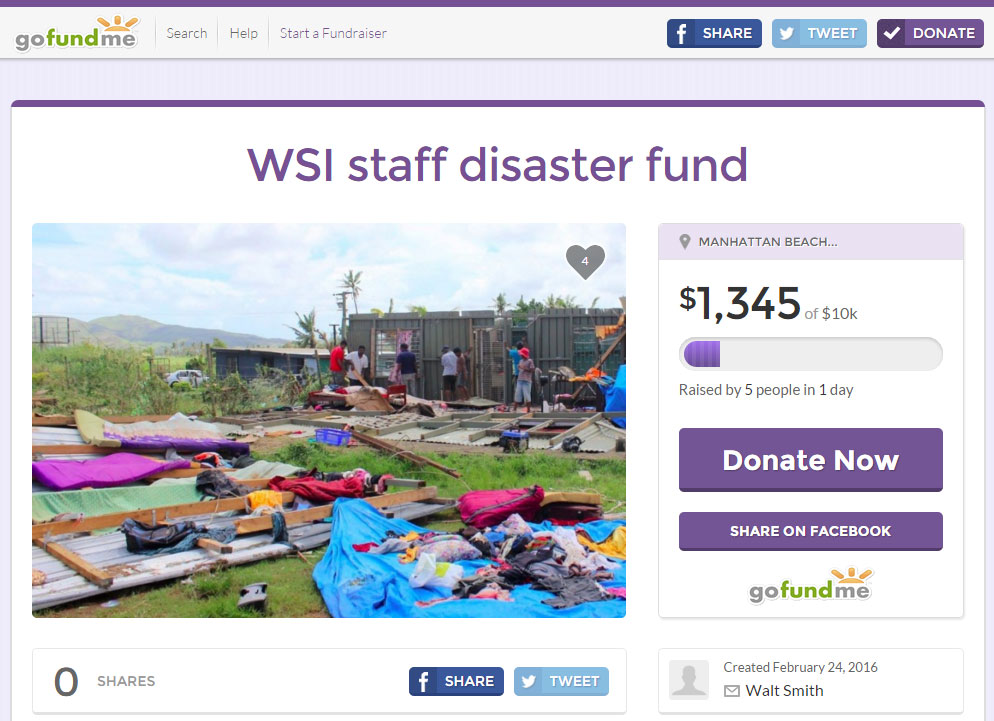 Walt Smith notes that, “Sending to the other funds (UNICEF/RedCross) is always another way to donate but this way some of my customers have suggested will have an immediate effect on those in need.” For those who send support through this GoFundMe campaign, Smith has pledged that, “Each donor will receive a special thank you note from those you help and we will issue a special private newsletter to let you know what we were able to achieve.”

Considering a donation? Here is a thought-provoking op-ed by Peter Walton, director of International Programs at Australian Red Cross, which appeared in The Courier Mail in Australia. “Within minutes of launching our Tropical Cyclone Winston Appeal, people were messaging us about boxes of clothes and shoes they wanted to send to Fiji. Each time, with great regret, we gently suggested they reconsider…Why are we saying reconsider how you help? Because the ugly truth is a box of second-hand clothes or kitchen supplies or old shoes is unlikely to reach that family in need. If it even makes it to Fiji, it is likely to sit on the docks – as hundreds of similar boxes did in Vanuatu after Cyclone Pam last year – because no one has paid the fees to process or distribute them. Shipping containers of untracked, unsolicited donated goods were still sitting at Port Vila’s wharf at the start of this year, costing the government millions in storage fees.

“But if you want to help Fiji, here and now, the most effective way is with a monetary donation that will be translated into the most appropriate type of support based on local need. It will help the country get what it needs, when it’s most needed. It saves money and prevents waste. To the thousands of Australians who help us in every crisis – from Syria to Separation Creek – I can’t thank you enough. Your generosity means the world.”

Donations can be made through the bank accounts below and donors will not be charged any fees, including overseas transactions.