In 2006, the Nature Conservancy published the results of an extensive underwater survey of the coral reefs of the Solomon Islands.  They concluded that “the Solomon Islands is an area of high conservation value where marine diversity is exceptionally high, marine habitats are in good condition, and current threats are low”. They reported 494 species of corals, second highest in the world next to Raja Ampat, and 1,019 fish species.

In this 5-minute video program, my wife Marj and I have tried to convey some of the beauty and diversity of the Solomon Island coral reefs. Many of the fishes and corals in this video will be familiar to CORAL readers, but here they are presented in their natural environment.

We thank Bilikiki Cruises for taking us to some of the most exceptional coral reefs on the planet, and to Pamela and Randy Copus of the musical group “2002” for their wonderful music composition “Summer’s End” to accompany these scenes. 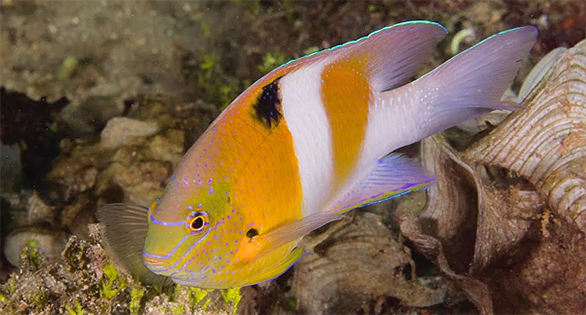 There are no new species (well, maybe one clingfish) or discoveries among these video and photographic scenes, but we tried to capture images that would convey how beautiful these reefs and marine animals can be. (Note that all scenes and animals are identified in the closed captions available by clicking on the CC icon in the menu beneath the screen.)

Video scenes were captured in 4K using a Sony AX100 camera in a Gates housing, with Sola 2100 video lights. Photos were taken with a Canon 7D Mark II camera in an Ikelite housing with Ikelite 161 strobes.  The title scene with the blue Acropora was shot in 4K with a GoPro Hero 4.   Final Cut Pro X was used for editing.

Yes, I know the Flame Angelfish is a touch out of focus. I had no expectation that one would come right up to my lens. Never had that happen before!