Can Crowdfunding Save this Species? 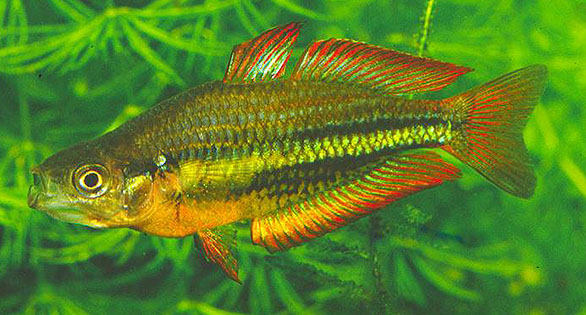 Rare male Running River or Burdekin Rainbowfish in a home aquarium in Australia. Experts fear that the pure, wild form of the species could be lost in the near future. Image: Neil Armstrong.

Can aquarists and conservation breeders help save a species and write a happy ending to a tale of misguided aquarium keepers transplanting rainbowfishes in the wild?

• With their golden to green bodies, bright red fins, and distinctive black zigzag lines on their flanks, the native rainbowfish of the Running River in the Burdekin catchment of northern Queensland, Australia, have long been recognized as unique by aquarists.

The population has also been somewhat enigmatic due to uncertainty surrounding its taxonomy. The issue of whether this fish represents an undescribed species or an unusual color variety of the Eastern Rainbowfish, Melanotaenia splendida, remains unresolved. Names in common use for this fish include Burdekin Rainbowfish, Running River Rainbowfish, Hidden Valley Rainbowfish, and Zigzag Rainbowfish (also sometimes used for Glossolepis dorityi).

The term Burdekin Rainbowfish can also be applied to unusual-looking fishes found in various parts of the broader Burdekin River system, but the latter three names are specific to the Running River fish, and we prefer to use the name Burdekin Rainbowfish because it is the historical name used for this species.

In August 2015 we sampled various rainbowfish populations across the Burdekin drainage and made some unusual discoveries concerning Running River fishes, and when we compared our data with previous information from members of the Australia New Guinea Fishes Association (ANGFA), an alarming pattern with strong conservation implications emerged. 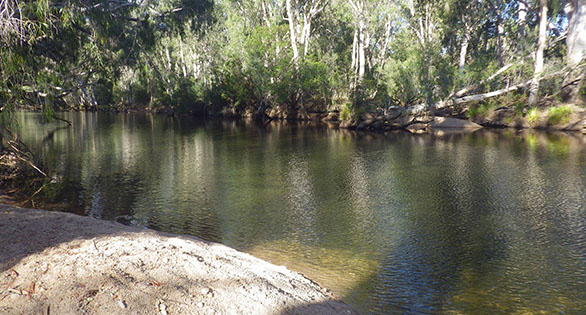 Native habitat of the Running River Rainbowfish, where the native population is being invaded by another species apparently introduced by well-meaning aquarium hobbyists. Image: Michael P. Hammer.

Natural Territorial Boundaries
Two gorges appear to promote natural patterns of rainbowfish distribution in the Running River, resulting in three distinct zones. The Burdekin Rainbowfish is largely limited to the middle reaches of the river. The lowermost section of the Running River is dominated by typical-looking Eastern Rainbowfish, and there appear to be barriers in the downstream gorge section that prevent them from moving upstream. Burdekin Rainbowfish are occasionally observed lower down, but this seems to be a seasonal or episodic event (for example, relating to large flow events), as evidenced by our recent visit, when only Eastern Rainbowfish were encountered.

The upstream limit of the Burdekin Rainbowfish aligns with another gorge just below the township of Hidden Valley. No rainbowfishes are considered native upstream of this gorge. Some are thought to have been released into Birthday Creek in the upper Running River, but could not be found at the release site when it was sampled earlier. 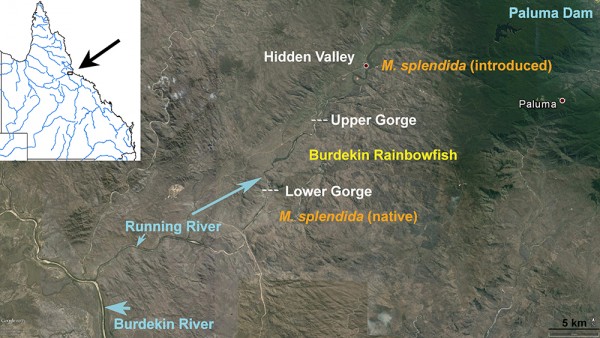 Genetic Dilution Happening Now
Essentially, the Running River or Burdekin Rainbowfish is about to get genetically swamped out of existence by these newly arrived Eastern Rainbowfish; the genetic dilution has probably already started. Thus it is paramount that anyone who is keeping Burdekin Rainbowfish in a home aquarium take good care of them. Earlier collections are more likely to represent the original fish than those swimming in the river today, so please contact us if you have any known-origin Burdekin Rainbowfish. So far we have determined that Bruce Hansen and Keith Martin have breeding colonies from a 2012 collection, Peter Eggler has some from 2010, and Peter Ford has some too.

There are other populations of Burdekin Rainbowfish in different Burdekin tributaries, but they are poorly documented and remain essentially unstudied genetically and morphologically. We are initiating some genetic work on them shortly to try to sort out their taxonomic status. In addition, it will be necessary to get some captive breeding going for Burdekin Rainbowfish and to make people aware of the dangers of translocating fishes to areas where they don’t naturally occur—irrespective of whether they are considered Australian native species or not. The Burdekin Rainbowfish is an attractive and interesting fish, and it would be a shame to lose it completely. 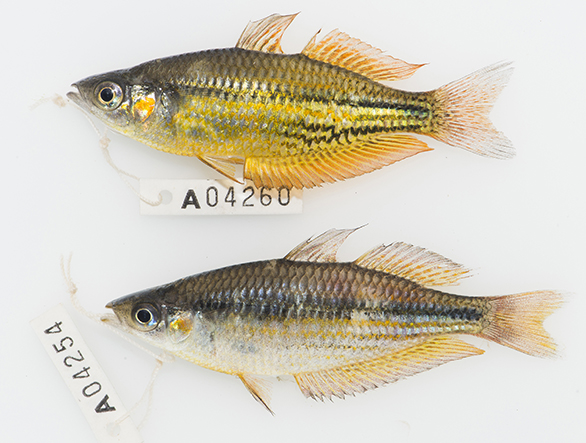 Museum specimens of a male Running River Rainbowfish (top) and an introduced male Eastern Rainbowfish (bottom) collected alongside each other. Photo by Michael Hammer.

Crowdfunding to Save a Species
Through the University of Canberra, ANGFA has established a crowdfunding website to raise sufficient money for a genetic study, with a goal of AU $3,500 (US $2,500 or Euros 2275).

The study will compare wild (1997 and 2015 samples) and captive fishes from various sources and devise the best mix of fishes to create a pool of captive stock, taking care to exclude any genetic contamination in the broodstock. These stocks can then be distributed to large-scale breeders like Ausyfish, Aqua Green, and Guyra to ensure that a viable population is established in captivity that can then be spread more widely to native-fish enthusiasts.

Efforts have already been made to establish populations in Europe, and they will eventually become available in North America to US breeder Gary Lange (St. Louis, Missouri) via Johannes Graf.  AMAZONAS Magazine Editors Hans-Georg Evers (Germany) and James Lawrence (U.S.) have committed to providing ongoing reporting on the success or failure of the research and conservation breeding efforts.

“Here is a case where aquarium keepers, probably thinking they were doing a good deed, transported a popular, very pretty rainbowfish into a section of a remote river,” says AMAZONAS Editor Lawrence. “The end result could be the extinction of a rare species whose territory has been genetically contaminated. Here’s a chance for conscientious aquarists to pitch in and help correct a wrong done by some unknown fellow aquarium keepers.”

How to help
Stay tuned to ANGFA’s quarterly journal, Fishes of Sahul, and the ANGFA website or Facebook page for more updates, or donate via our crowdfunding site. Any donation, no matter how small, will go a long way toward achieving our goal.  Click to donate now.

To contribute, go to the University of Canberra link listed below. Credit card payments (VISA and Mastercard) are accepted.  Donations are made in Australian dollars.   One AU Dollar is equal to about 70 US cents | Euro .65 | British Pound .5.   The donations are acknowledged in writing.