What a Sweet Way to Kill! 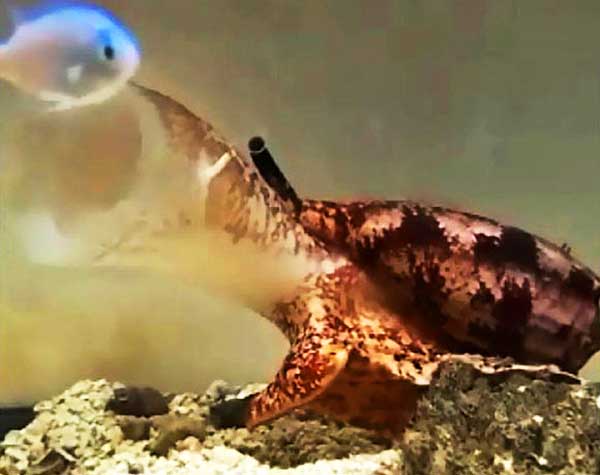 Once they are past being novices, most reef aquarium hobbyists have heard about venomous “cone” snails, named for their basically conical shape. Taxonomically placed in the genus Conus, some species, at least, are capable of stinging humans resulting in a series of quite interesting and seriously unpleasant consequences for the human.

While there have been quite a respectable number of human fatalities attributed to Conus envenomations, as far as I know, no reef aquarium hobbyist has become posthumously, and justifiably, famous for becoming the first aquarist to commit the ultimate faux pas of getting killed by one of his or her tank inhabitants, and by a lowly snail, no less. Of course, there are a number of situations where such a fatality would go unnoticed for what it is; a cone snail sting can very effectively mimic a heart attack, and unless the sting site was specifically looked for it might not be seen.

Those Conus that can kill humans are all predators on fishes. Given that humans are distantly derived from a fishy ancestor, it is no surprise that many aspects of human fundamental biochemical physiology are shared with fishes. Among many others, these shared metabolic reactions include the basic chemistry that allows nerves to function.

Injected Conus venoms, or conotoxins, vary from species to species, but one thing is always certain, they are NOT comprised of just a single poisonous chemical. Instead, they are all fantastic cocktails of many different venoms, sometimes well over a dozen different chemicals are mixed together, presumably by being shaken, but not stirred.  Research has shown the conotoxins from some fish-eating snails are a mixture of specific chemicals that kill every nerve cell in the victim’s body by simultaneously disabling or destroying every conceivable biochemical process those nerve cells can use to send a signal.

If someone is unfortunate enough to be stung by a large cone snail whose venom apparatus produces such a conotoxin, it is quite likely he or she will quickly have a very exciting, very short, and probably very terrifying experience.  It has been written that one tropical Conus species (Conus geographus ) has a local common name of “Cigarette Snail,” because after being stung, the victim only has enough time to smoke one cigarette.

Dangerous Conus species found in the Philippines. Ranging over the Indian and tropical Pacific Oceans, the fish-eating Conus spp. have been implicated in the deaths of fisherfolk and people wading in shallow seas. Image © Wolfgang Bethge | http://www.insights-philippines.de/conesnails.htm

Most folks don’t realize is just how many Conus species are found in the seas. At times, Conus has been described as being the largest animal genus, in terms of species number, with well over 800 valid species, and several THOUSAND named species.  Researchers have found the first recognizable fossil cone snails in strata over 30 Million years old.  Starting with these ancestors, the cones have been on an evolutionary roll. Once started, their rate of evolutionary diversification has never stopped, or even slowed down. Given their success rate of speciation, when compared to other predatory snail genera, the cones seem to have found THE way to be a predatory snail.

All cones are predatory, and diversification occurs when a “daughter” species specializes on a food or a habitat type different from its parent. Being notoriously slow moving animals, it seems, populations can easily become reproductively isolated from one another, even if they are only a short distance apart. Having small reproductively isolated populations really acts to kick start speciation. It is easy to see, perhaps, as individuals of a new potential prey species become abundant and are eaten, some small Conus individuals may acquire heritable changes in either their feeding apparatus or parts of their feeding behavior that favor capturing and consuming a new prey species. Over time, quite possibly over a relatively short generational time, a new feeding methodology or habitat preference gradually develops, resulting in a new species.

At the present time, more than 100 species of cone snails are known predators on fish. While various spearing and injection behaviors alone appear to be the most common ways to capture prey, a few of those preying on fish actually use an additional behavior to insure that their dinner does not escape.

One of the more interesting ways in which Conus get fishy dinners is by what has been called “netting.” Occurring in a couple of species within one lineage of fish-eating cones, the basic sequence of events is simple.  And, it has been puzzling… 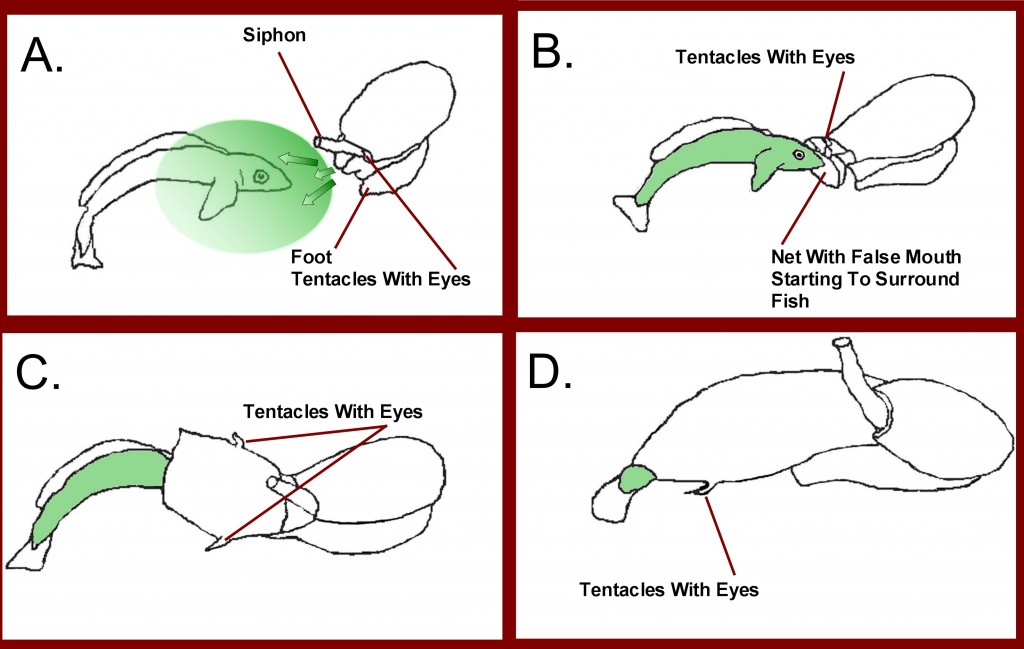 A net-feeding Conus ingesting a small fish. A. The snail sprays the “nirvana-cabal”(green) into water near and over a fish. B. The snail approaches the fish which has absorbed the weaponized insulin. C. The net (the snail’s expanded head and mouth region) engulfs the fish. D. The fish is almost completely engulfed.  The net is made of the inflated front part of the animal’s body, the apparent mouth is called the “false mouth” because the whole expanded net is structurally made from the snail’s lips, and the actual mouth is inside the net at its base, and once the fish is engulfed by the net, it still has to be eaten and passed through the true mouth.

The net-feeding cones prefer habitats that are also preferred by small or just-metamorphosed post-larval fishes.  These cones likely all normally feed at night. These cone snails have an elaborate “chemosensory” organ, the osphradium, a structure that detects low concentrations of chemicals dissolved in water, or in other words, the water-borne equivalent of odors. They are olfactory predators, searching out prey by their scents in places where larval or small juvenile fishes seek shelter, such as in crevices or small caves.

The end-game begins when the snail detects dinner on the fin; this is either a single fish, a small school of fish or a school of small fish, and breaks into a gastropodan gallop toward its prey.  The interior of snail’s front end and head region contains many blood cavities called lacunae. Approaching the fish, as its odors become intense, various valves close blood pathways resulting in the blood being forced into the lacunae. In turn, this results in the inflation of soft tissues in the head and mouth region, creating a tubular or funnel-shaped turgid tissue cone, arising from, or appearing to inflate out of, the snail’s aperture.

Mobile, this large inflated structure is aimed toward the fish, which doesn’t move, but appears alive and breathing.  The snail approaches the fish with the flared structure arrayed in front of it while the fish doesn’t move. The flaring structure, the so-called “net,” moves over, surrounds, engulfs, and closes upon the fish which is pulled into the aperture. Curiously, as the net containing the fish disappears into the shell, the fish does NOT struggle. Once enclosed inside the net, the snail stings the fish with its harpoon-radular tooth, injecting a series of venoms that kill the fish in less time than it takes to type “kill the fish.” After that, the snail may or may not move, but in any case, a few hours later, a bolus of mucus and fish bones is burped out and then the snail goes to find a place to reflect on snail metaphysics after the consumption of a great meal.

The question now arises, or should arise: “Why didn’t the fish just swim away?”

Cone snails don’t move rapidly. My doctoral research advisor, Dr. Alan J. Kohn (aka “the Great Khonus”) was the 20th century’s leading researcher on Conus ecology and taxonomy. Over my interminable time as his advisee/apprentice, he naturally gave many presentations on those topics, some of which were interesting. A point often made in his presentations was that, at the time, some cone snails were the slowest-known of mobile marine snails. A few other cones moved quite a bit faster, he claimed one could actually see a specimen move, if one was careful and prepared to wait quietly. Slowly-moving predators obviously have a problem pursuing prey. In essence, such slow-moving predators must be able to immobilize any prey they encounter if they hope to have dinner.

Recent research has revealed some of the salient secrets of Conus netting behavior. As the snail approaches the fish, it squirts an unseen, by humans anyway, venom toward the fish. The first squirt of venom from the snail’s mouth contains several components incapacitating the fish; if it moves at all, the prey seems to become disoriented and stunned; for lack of a better term, it gets “spacey.” As a result, the initial scientists studying the netting behavior referred to this venom mixture as “the nirvana cabal.”

Initially, the researchers looked for and found deadly venoms in each of two Conus species that were netted their prey, C. geographus and C. tulipa. Their venoms contain numerous neurotoxins capable of disabling and killing the prey. However, these large venom molecules do not easily pass through the tissues covering prey’s mouth, gills, or skin.

Further investigation showed that in addition, to the neurotoxins, the nirvana cabal also contained highly specialized and modified insulins. The modified insulins have functional insulin regions are structurally unlike the snails’ own insulins, but are structurally quite similar to fish insulins. Additionally, the venom insulins are unique in that they are the smallest known insulins lacking the “control” regions found in all other insulins. 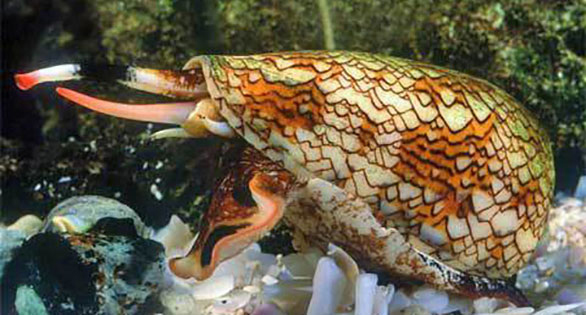 Normal insulins, in invertebrates and vertebrates, are made of two protein molecules combined together, and each of these two molecules has two parts, an active part that works to lower blood sugar concentration, and a control part which allows the animal’s own regulatory chemicals to attach to the insulin rendering it inactive. Normally when an animal has too much insulin and goes into insulin shock, its own body’s regulatory chemicals are secreted into the bloodstream and attach to the insulin molecules bringing the insulin concentration under control.

As fish, any fish, encounters these insulins in the water around them, the insulins’ small molecular sizes facilitate absorption across the skin, gill, or mouth epithelia whereupon the insulins take control of the fish’s blood sugar metabolism effectively immediately resulting in hypoglycemic, or insulin shock.  Almost instantly paralyzed, the fish can easily be engulfed by the snail’s large netlike body extension and subsequently stung with its hypodermic tooth containing lethal venom, and consumed.

The take-home message for a reef aquarist is that marine snails are deserving of our respect if not outright awe. Although rare, the arrival of fish-eating Conus species in livestock shipments is a slim possibility but one that I would suggest is at least deserving of keeping in mind whenever handling live rock, wild-collected or maricultured corals or even “clean-up crew” animals.