A zoologist ponders: “The Silent Screams Of A Distressed Damsel…” 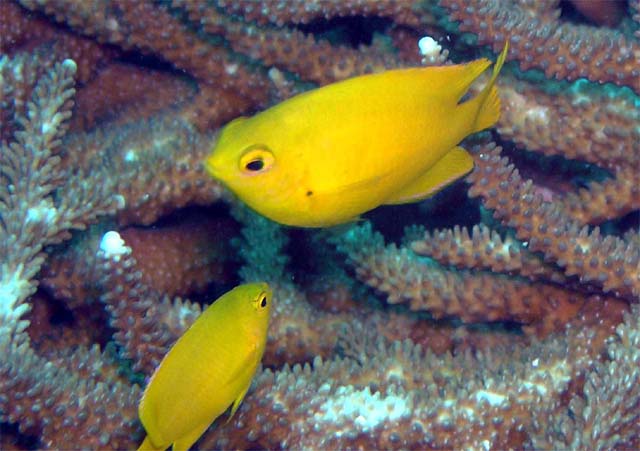 Dictionaries define “tresses” as long locks of hair, particularly from women, and “dis-” is defined as a Latin prefix meaning “apart,” “asunder,” “away,” “utterly,” or having a privative, negative, or reversing force. Whew, quite a sentence! So a distressed damsel must be a woman whose long locks of hair have been taken away, presumably by shaving or cutting. If they were pulled out, the screams would be anything but silent. If forced, I might guess that a damsel who, against her will, had her hair clipped off, scalp shaved, and subsequently waxed, polished, and buffed to a nice sheen, would definitely be classified as being distressed and would likely be trying to warn other women about being assaulted by a rogue coiffeur with a spare can of Turtle Wax.

In examining some information about how damsels could warn other damsels, I found a National Geographic blog, with the URL: http://phenomena.nationalgeographic.com/2015/11/06/damselfish-in-distress-release-chemicals-that-summon-more-enemies/ , by an altogether more professional blogger than myself, which discussed how chemicals emanating from a threatened single fish might serve to attract additional predators, thus causing a predator-versus-predator free-for-all allowing the initial prey fish to escape during the melee.

I initially thought: “Wow!! Isn’t that an interesting hypothesis?”

The blogger stated: “When threatened by predators, the Lemon Damselfish sheds a chemical alarm—a substance housed in its skin that says, “I’m being attacked!”

He goes on to state: “Many aquatic animals release alarm chemicals from their skin when they are injured.”

To me, “when threatened” implies that the prey is uninjured and probably seeing the threat. I do not think “threatened” is the same as “injured.” In this situation, “injured” is a state of unsuccessful predation (as the prey is not as yet killed or eaten), where the prey is physically damaged. As the authors of the paper in question clearly state, the chemical cues are located in the epidermal layer of the damselfish and are only released upon mechanical damage, not when the critter is scared feces-less.

My question is: Does a small, frightened uninjured (= threatened?) fish even release any such chemicals?

A quick scan of the cited references from the Lönnstedt and McCormick article doesn’t list any articles that specifically state anything about uninjured fish. Their references indicate the chemicals being discussed have had to come from injuries.

Obviously, I think the interesting question is: “Does a small fish, when it perceives it is about to be attacked, release chemicals from its skin? Or does it respond like many mammals, humans included (at least in some cases…) and become scared sh*tless, thus releasing copious amounts of a vast variety of chemicals, amongst a lot of other stuff, from their nether opening. Incidentally, for humans, this latter behavior was well documented in the unit histories of the USAAF 8th Air Force’s bombing missions over Germany in WWII, when various crew members would return from the missions to targets with intensive anti-aircraft fire with their flight-jump suits showing evidence of what were termed “brownouts.”

I also have witnessed such behavior in mule deer. Once, as a grad student, at the University of Washington’s Friday Harbor Laboratories, I was walking down to my office from grad student housing after dinner in the twilight just after dusk. The laboratories’ grounds were then, and probably still are, a biological preserve of about a square mile. Back then, at least, there were all sorts of semi-tame wildlife on the property. This evening ahead of me, I saw a doe of the island race of what was called “Columbia Blacktailed” Deer – these were deer that fully grown would weigh from 80 to 100 lbs – tiny things when one was, as I was, used to Rocky Mountain Mule Deer where the bucks can top 400 lbs.

Anyway, I walked quietly up behind this doe who was obviously thinking deep cervine metaphysical thoughts while grazing placidly on some shrubbery, snowberry I think. When I was about two feet from her butt (but positioned – luckily – off to the left side) I tapped her lightly on her back at the base of her tail and said, in a conversational voice, “Boo…” She sprayed a liter or more of deer pellets out in a pattern reminiscent of that formed by the blast of pellets from the discharge of a cylinder-choked shotgun, and took off stotting full tilt through the brush. I think I heard her bouncing away through the undergrowth for about for a full minute or so.

In any case, it seems to me that there are definite problems with the National Geographic blogger’s essay, ones that create confusion and that I would like to see resolved.

Cheers, to all, until later,

“The Silent Screams of Damsels in Distress” (Reef2Rainforest Blog, November 13, 2015)