Sat on a tuffet,

When she saw a sea spider

Eat the zoanthid beside her,

It gave her a lot of grief. 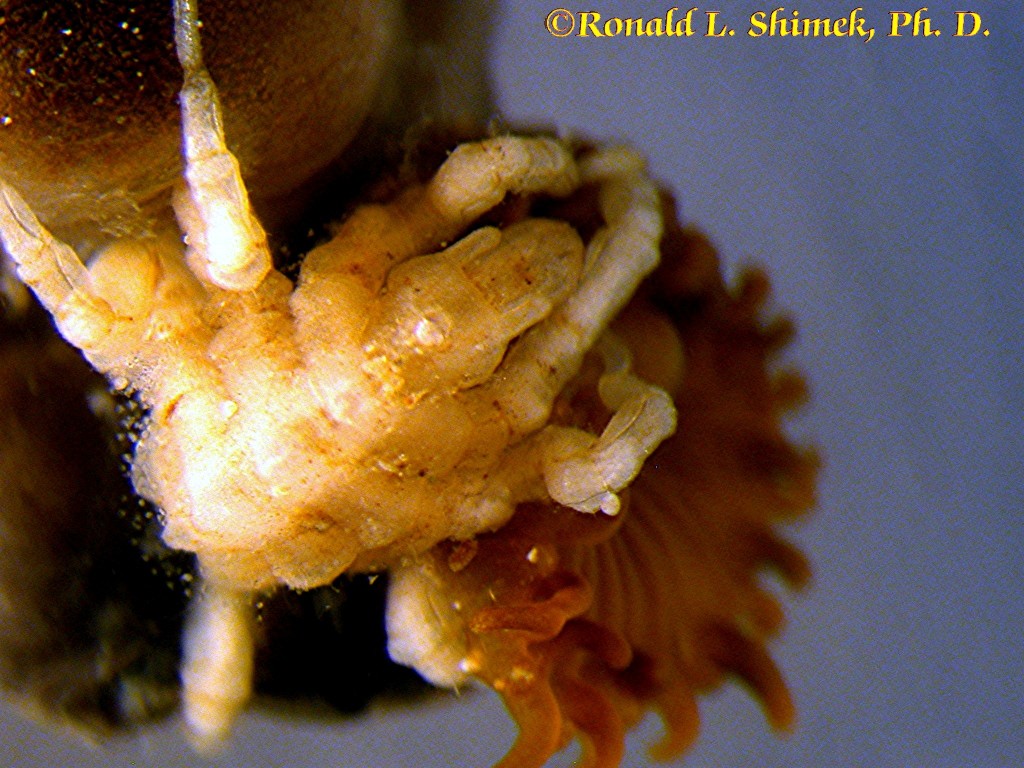 A zoanthid-eating pycnogonid climbing on to dinner.

Now, the first question you need to ask yourself, before you proceed any further in this essay is, “What is a Tuffet?”

In the first of this series of blogs devoted to oddities of the marine world and marine aquaria, I noted no marine insects lived wholly underwater, and precious few lived on the water’s surface. Actually, as it turns out, other than crustaceans (crabs, shrimp, copepods, and all of their myriad kin), only two other arthropodan groups do well in marine ecosystems: the mites and the sea spiders. Mites are tiny relatives of ticks and are often parasitic or predatory. Surprisingly common in reef tanks, they are generally too small to be seen with the unaided eye, and are largely ignored by aquarists.

The sea spiders, otherwise known as pycnogonids, are also common in reef aquaria; unlike mites, which of course, are mitey small, sea spiders aren’t, and do get noticed. As adults, they generally prey on all sorts of sessile animals, such as the Divine Ms. M’s zoanthid, as well as corals, and sea anemones. Adult pycnogonids may or may not be restricted to one prey type, such as a particular zoanthid species. However, just by eyeballing the animal, it is impossible to tell if it is.

Sea spiders are peculiar animals, and I told my Invertebrate Zoology students they might be forgiven for thinking pycnogonids are comprised only of legs and the hinges fastening those legs together.  Of course, being arthropods, pycnogonids are actually quite complicated animals which have had the decency to appear quite rare in nature, which means that the number of people that have studied them is relatively few, making it a bit easier to find important papers. Fortunately for scientists, or unfortunately for reef aquarium hobbyists, coral reef sea spiders are often both diverse and common. This is to be expected; after all, being small critters which eat animals, such as cnidarians (which generally sit in one place all their lives), there is really no better place for pycnogonids to find essentially unlimited food sources than a coral reef. Consequently, these small animals and coral reef hobbyists were bound to make each other’s acquaintance sooner or later. Unfortunately for the aquarist data base, however, most of the detailed work on pycnogonids appears to have been done on temperate or cold water animals. 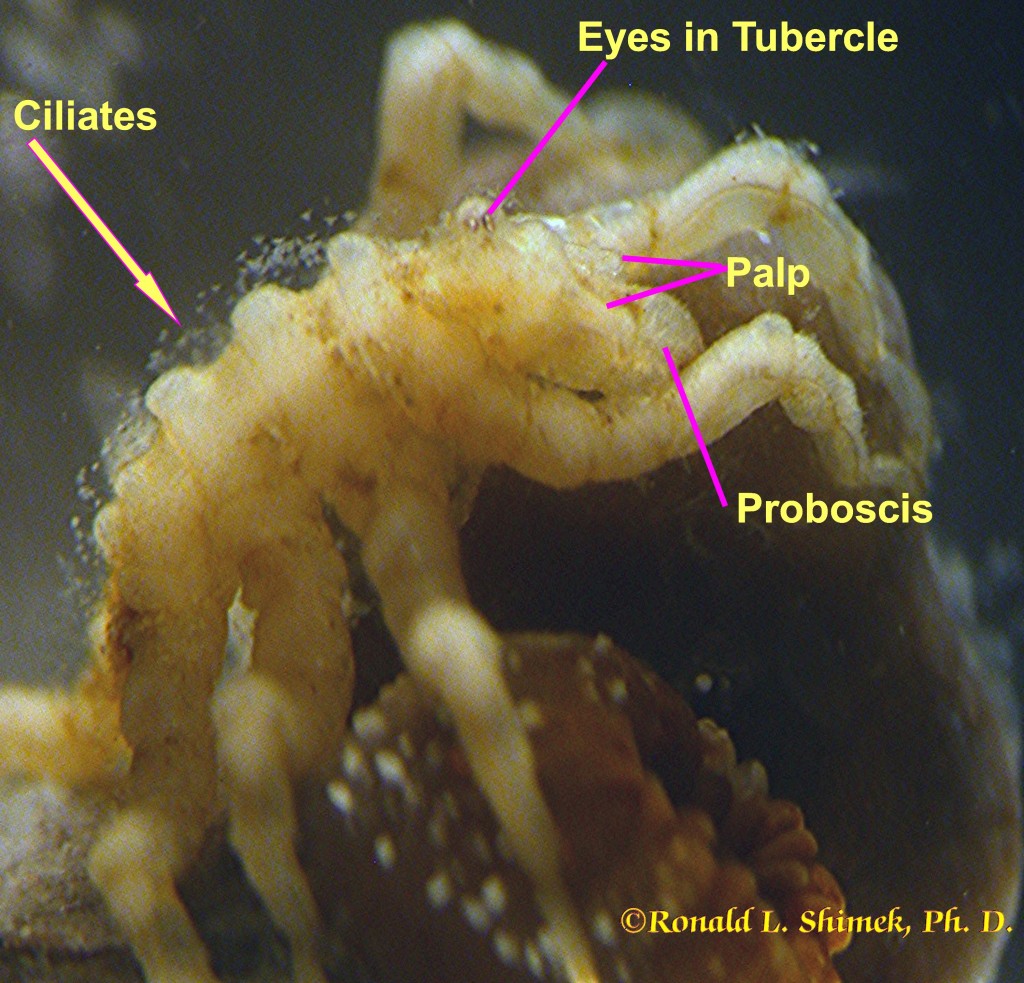 The common name, “sea spiders,” gives a great deal of pycnogonid anatomy away. They are marine animals bearing a superficial resemblance to spiders.  And, in this case, unlike other creatures with “sea” in their names (such as sea cucumbers, sea urchins, sea onions, sea blubber, and sea snot), sea spiders not only actually do look a lot like spiders, they are also distantly related to them. They would look a lot more like spiders, however, if they had anything that really resembled a spider’s body. 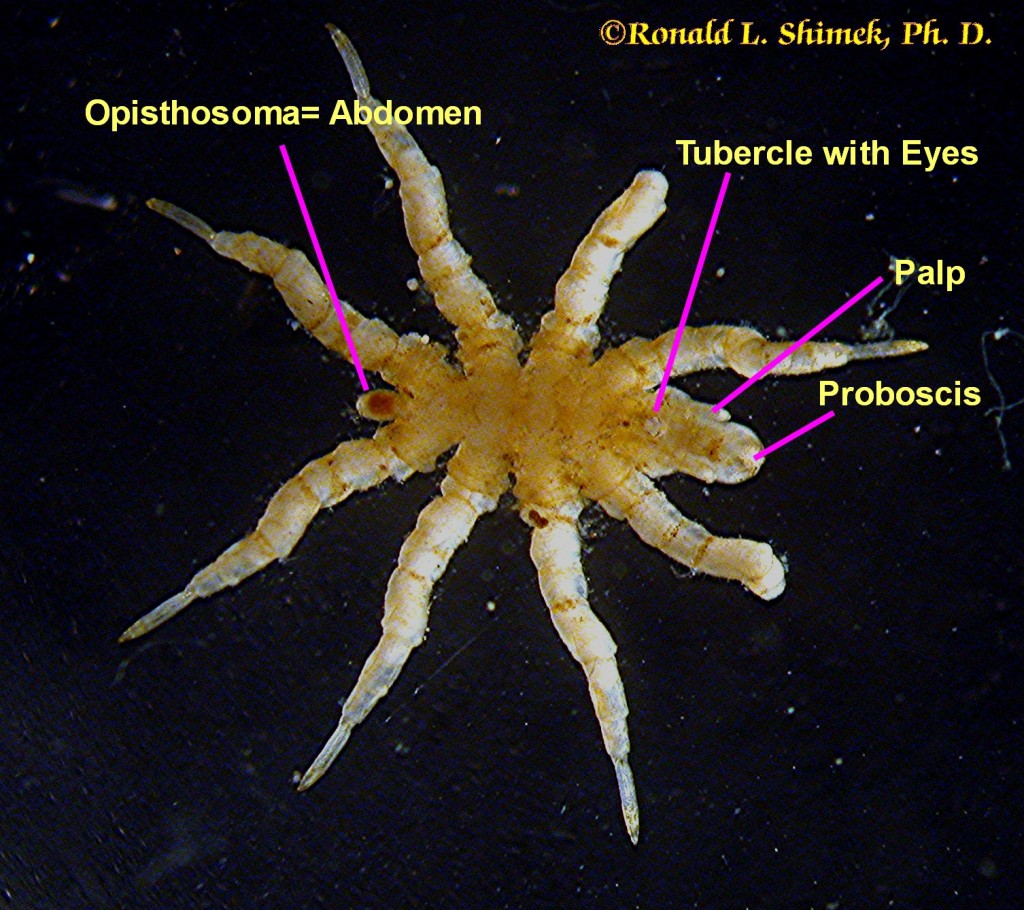 The ones I have seen either in, or collected from, aquaria range from 1 mm to about 5 mm across; however, some giant pycnogonids from deep water in the Antarctic seas reach almost 1 meter across their long narrow leg span, and there are photographs showing these animals in rather large swarms. If somebody has arachnophobia, those images will likely convince them not to go into polar deep sea marine biology.

The pycnogonid’s thin body generally appears to be nothing more than a rod connecting the legs. The abdomen (or opisthosoma) is reduced to a tiny little nubbin. Being good arthropods, from front to back they have a series of paired appendages, each pair on a specific rudimentary segment. They have a couple of specialized appendages referred to in some arthropodan groups as “chelicerata,” and a couple more called “palps.” However, just to be different, it seems, the chelicerata in pycnogonids are called “chelifores,” and their palps are called “pedipalps.” Most have four (but some species have five or even six) pairs of walking legs. Males have another, specialized appendage pair, the “ovigerous legs” for carrying the eggs around after spawning. Pycnogonids normally move very slowly, possibly due to having such relatively long, thin appendages and relatively little muscle mass to move them. In the smaller species, only one muscle cell and some surrounding supportive connective tissue cells comprises each “muscle.”  Nevertheless, there is one literature report that noting one species’ individuals are able to use exceedingly rapid movements of a single appendage to capture swimming brine shrimp. 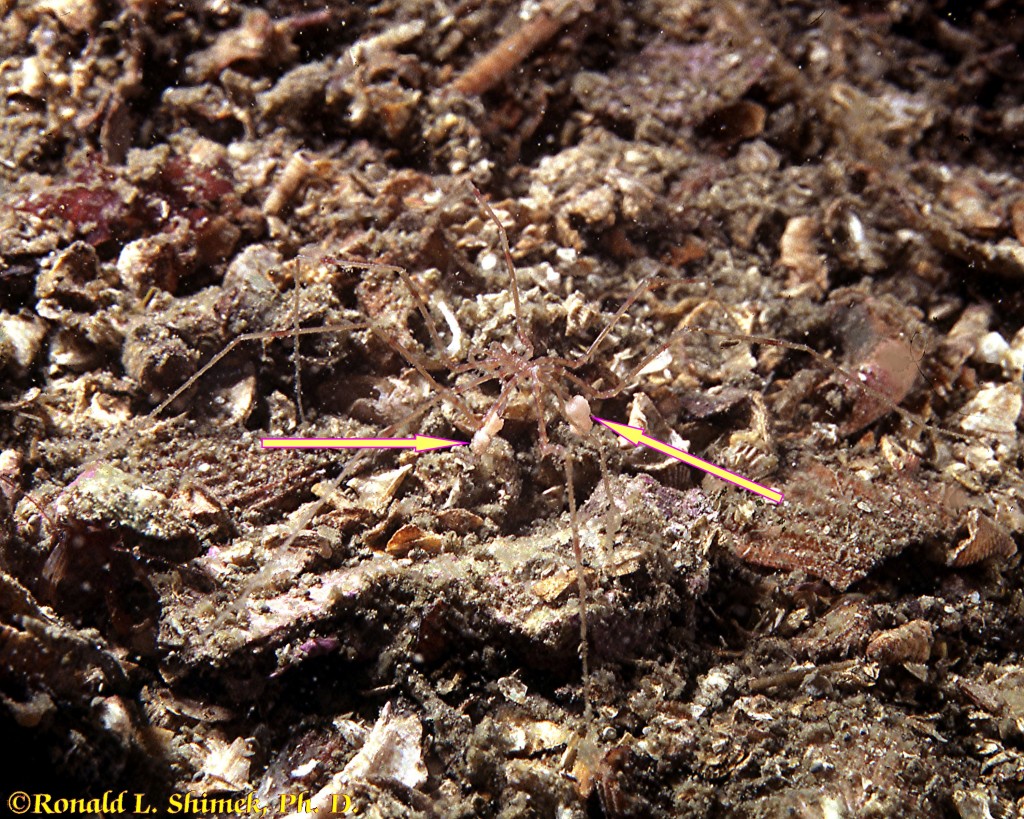 A male long-legged pycnogonid possibly in the genus Nymphon. The arrows indicate egg masses on his ovigerous eggs.  He was about 75mm (3 inches) across his leg span.

The exceedingly narrow body’s front end is an often bulbous proboscis, sometimes of relatively large size, which is used to cut into the prey or host, and, together with a muscular pump in the throat, to suck out and eat the prey’s tissues. If they need to do so, some pycnogonids are capable of masticating their food.  The food enters a short esophagus and passes through a unique valve into the midgut, which generally has large (on the scale of pycnogonids), sac-like digestive extensions called caeca which extend out into the legs containing specialized cells for food absorption. When full, the cells release themselves from the midgut into the blood cavity surrounding the viscera. As they drift in the blood, other cells and tissues get digested food from them. Indigestible food is voided into the gut (or possibly the blood) and excreted by specialized excretory glands found at the base of some anterior legs. At the animal’s posterior end is a nubbin: all that remains of the abdomen or opisthosoma. Some early fossils found in deep time, the Cambrian period, appear to be pycnogonids with a larger, more evident abdominal region.

A more-or-less typically tubular arthropodan heart has two to three pairs of side openings that allow blood to enter and an anterior opening directing pumped blood to the brain and anterior nervous system. They have no gills, or any sort of specialized respiratory system or organs; presumably, their long narrow structure allows all their body cells to be close enough to the animal’s surface for passive gas exchange to be sufficient for respiration.

The reproductive organs open in a basal leg segment. After mating, where the male’s sperm fertilize the female’s eggs as they exit her body, the male gathers the eggs into masses which he places on specialized appendages called “ovigerous legs,” located between the palps and the first pair of walking legs, whose only function is egg carrying. The male carries the eggs until they hatch. Several types of larvae are found throughout the Pycnogonid group.

Reproduction, or Why They Can Enter Your Tanks on Anything…

There is a free-living larval type called the Protonymphon which has six appendages, a rudimentary pair of chelicerata, and 2 reduced legs. Upon hatching, it leaves the male’s care and crawls, swims, or walks away. Most developmental sequences leading to the adult occurring in protonymphon larvae after leaving the male are not known. Encysted larvae leave males on hatching and find a hydroid or a coral and get into the host’s gut or body and remain there through the next several molts; after that, they may find another host, or remain in that one. Eventually, they hatch and molt into a functional adult. Atypical Protonymphon larvae look something like a Protonymphon larva, but after they leave their male they either find their way into a clam or become firmly attached to a nudibranch or a polychaete’s surface and remains on or in its host through the next several molts, after which nothing is known until they are subsequently seen somewhere as an adult. Attaching larvae are filled with yolk; they remain on the male’s ovigerous legs until they hatch and swim away and disappear. They are next seen somewhere as an adult.

Pycnogonids typically have 6 to 8 larval stages, and as they molt they remodel the body and add or lose appendages with each stage. After the larval stage, they may have another half dozen or so stages separated by molts as they grow to adulthood. They don’t molt after reaching the adult stage.

As a group, pycnogonids eat sessile or nearly sessile prey: different species eat sponges, cnidarians such as sea anemones, hydrocorals, hydrozoans, as well as bryozoans, sludge, sea squirts, gastropods, bivalves, and polychaetes, as well as other animals. Their natural history and ecological interactions on coral reefs are very poorly known. I suspect there are pycnogonid species that probably eat every coral species.

One species has been seen to eat brine shrimp in aquaria, and probably would eat small crustaceans and maybe fish larvae in nature. One species in one of my aquaria ate only Aiptasia. Unfortunately, I was not able to collect them and get them identified.

Some species live 263-400 days as juveniles and up to 9 years after reaching the adult stage in the laboratory; however, their natural life span is probably less.