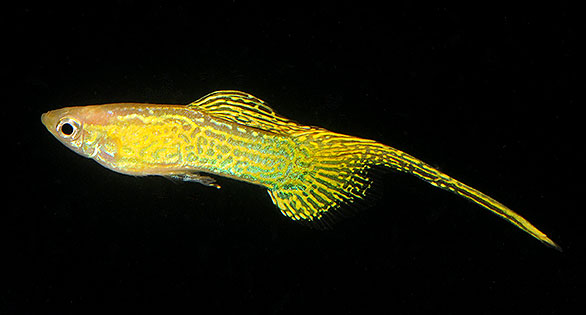 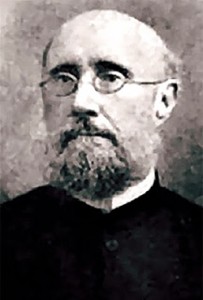 A real-life Robinson Crusoe, the lanky and reportedly cranky Dr. Robert John Lechmere Guppy (1836-1916) was a self-taught scientist swashbuckler with Maori tattoos in on his back and, fittingly for the man who gave the randy livebearer its common name, the sire of nine acknowledged children in the British Caribbean colony of Trinidad and Tobago. (He landed there after being shipwrecked in New Zealand, where he lived among the Maori people for two years and, he claimed, was on the verge of being married to a chief’s daughter when he slipped out of the country and set ail for South America.)

Just what Lechmere Guppy, as he was known, might have said if he could have dropped in on the recent 18th World Guppy Contest in Tampa, Florida, is anyone’s guess, but his little fish has come a long way genetically since 1866 when he discovered it not far from his home in Port-a-Spain, Trinidad.

We actually have a good idea of the appearance of wild the guppies of his day, recorded in this illustration done by Lechmere’s son:

We know from an article written by his daughter Enid Fraser that Lechmere, was primarily interested in fossils, shells and the geology of the Orinoco River basis. Says Fraser: “He was rather intrigued by appearance of the small livebearer” and sent specimens off to the Keeper of Zoology at the Royal British Museum. “The species was named named Girardinus guppii in honor of my father, and this scientific label was employed long enough for its specific designation to be returned, by popular terminology, to its original form: Guppy. Later on, after research by many scientists had been collated, the title Lebistes reticulatus was decide upon as being the best scientific term for the fish, but despite all this technical change the original specific designation based upon my father’s name, has continued in good standing throughout the world as the common name for the fish.” Credit for the original description of the species goes to Wilhelm Peters, a German zoologist, who named it Poecilia reticulata in 1859 after receiving preserved specimens from Venezuela, a number of years before Dr. Guppy found it in Trinidad. 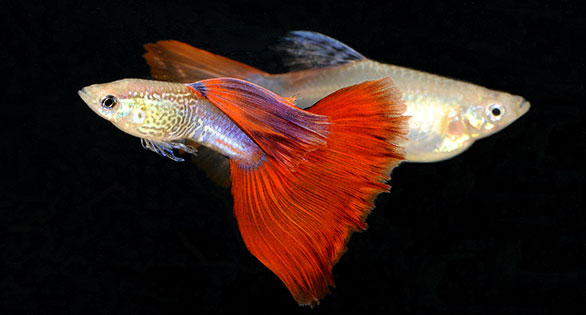 All entries are judged as male-female pairs, here an example: winners of the Delta Multicolor Class, by Naixin Zhang, China.

A Breeder’s Notes
Even old hands in North American Guppy breeding circles found themselves astonished by the diversity of captive-bred fish that arrived by the hundreds for international judging in Tampa, Florida, September 3-7, 2015

According to Joe Mason, well-known breeder and chairman for the event, the spirit of competitiveness is alive and well in global Guppy keepers today:

“The Florida Fancy Guppy Club was very pleased to host an outstanding gathering of Fancy Guppies and their award-winning breeders from four continents at the 18th World Guppy Contest. The World Guppy Association holds one show each year somewhere around the world the purpose of which is to promote and share the genetics of Fancy Guppies and promote camaraderie with breeders worldwide. All show entries are pairs and are brought to the group to be auctioned off at the end of the show, with the top bid reaching $190 and many attendees saying that the event had attracted a number of fish rarely if ever seen at North American shows.

Tampa Florida guppy breeders and the Florida Tropical Fish Farmers Association member farmers welcomed early arrivals by opening their farms to guests from Europe, Asia and South America. Many guests were surprised to learn that the farms, both large and small, are still family owned and operated. Guests were invited to local tropical fish club meetings and were able to share their hobby experiences with the members and learn interesting methods to share with their members at home. It was a wonderful exchange of ideas from the many cultures within the room and added another dimension to the experience. 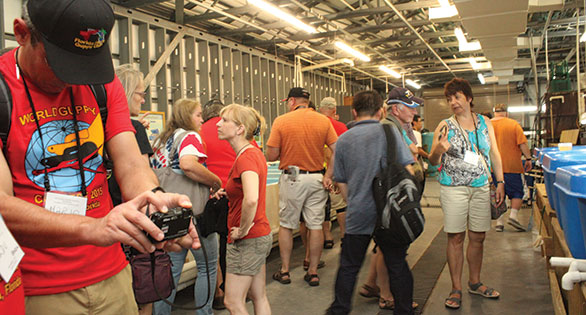 Segrest Farms Field Trip
The show had a great start with a tour beginning with a visit to Segrest Farms, North America’s largest aquarium fish wholesaler. The group transported by tour bus was greeted by President Sandy Moore who along with her staff led the group through the Segrest complex. The guests were in awe of the size and complexity of the facilities and the various factors that have to be handled on a daily basis that have gone into making this company what it is today. They were invited to view the salt water division, fresh water division, plant division and reptiles and were guided through each one with an explanation of the procedures that keep it running so smoothly. 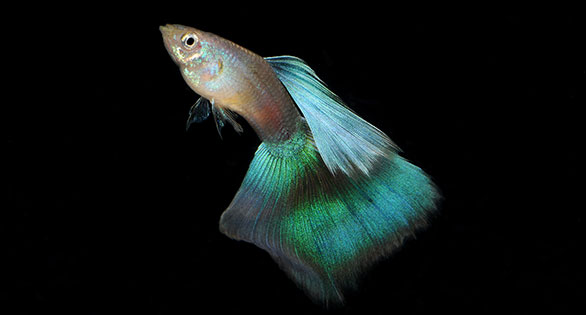 Noted US breeder Tim Mousseau entered this fish, which won as the male member of a pair in the Delta Green Class.

After the Segrest tour they boarded the bus and visited the University of Florida Aquaculture Laboratory in Ruskin, Florida. Here they were escorted by Matt DiMaggio, PHD through the different laboratories and buildings containing various research projects to enhance and assist the Florida Tropical Fish and Aquaculture Industry. They were shown the diagnostic lab that assists fish farmers in handling of diseases that come about on a reoccurring basis. The tour culminated for the rest of the afternoon filled with fun and flavors as they were treated to a Florida style cracker barbecue featuring the many unique flavors of native Florida cuisine such as alligator, wild boar and other Florida faire. 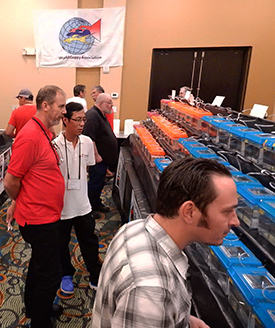 Hundreds of fancy Guppies from four continents provided attendees with the opportunity to see a diversity of rare and remarkable forms. Image: Amy DiMeo.

While everyone was on the tour, back at the hotel an international team of judges and staff were sorting, classifying and placing fish in over 400 tanks in anticipation of the judging. The team of nine judges was led by Stephen Elliott of the UK and Herman Magoschitz from Germany. Once the placement of fish was accomplished the judging was completed later that the evening. When the judging was finished the winners came from four continents and nine different countries led by the United States and the People’s Republic of China with five each.

Speakers and The second day the show room was open to the public and guest speakers were planned together with a panel discussion throughout the day. Dr. Roy Yanong of the Florida Aquaculture Laboratory spoke on Tropical Fish Diseases; Dr. Logan Randolph of Polk State College Winter Haven, Florida gave a lively discussion on planted aquariums; Alan Bias and Carl Groenewegen discussed guppy genetics. Following a lunch break the ever-popular panel discussion format was led by Stan Shubel, Gary Mousseau, and Jack Schendowich for an enjoyable question and answer session about all things guppies. 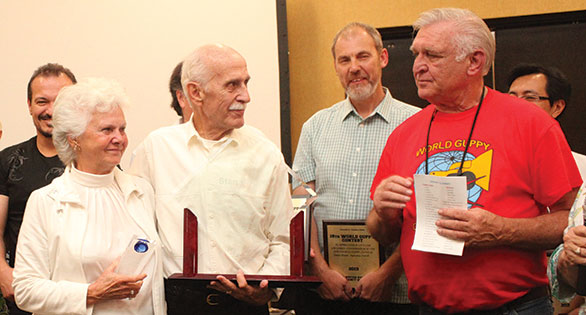 The Awards Dinner followed in the evening and was attended by more than 100 guests for the award ceremony for show winners and also to honor and recognize Stan Shubel for his over 50 years of contribution and service to the Guppy Hobby. Stan was instrumental in creating the standard for judging in the IFGA that is still virtually intact from when it was created. Stan helped organize the IFGA and has been a lifetime member. 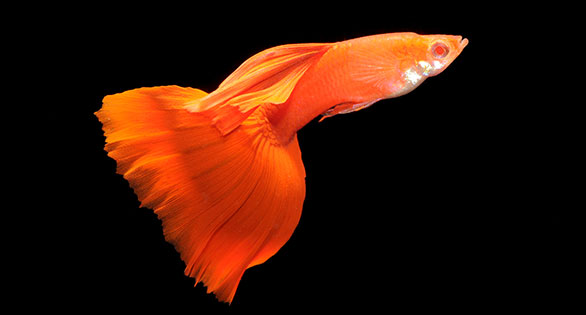 Our show culminated with a fabulous auction where all the pair entries from the show were auctioned off. It was attended by over a hundred bidders and the bidding was quite competitive and entertaining. It was so exciting that applause broke out numerous times and laughter filled the room. With over 400 pairs in the auction every pair was sold to a new home, with high bids reaching almost $200. Numerous attendees had a want list that was never fulfilled because they were outbid. 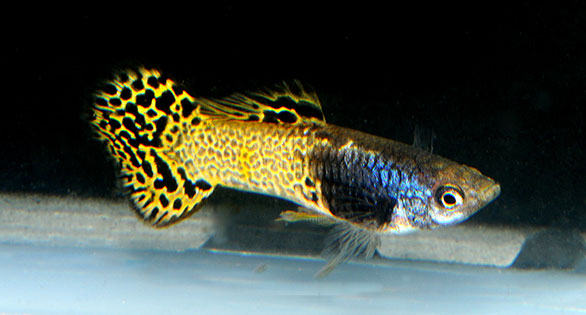 A local Guppy brought home a blue ribbon in the Roundtail Class, bred by Joe Mason of the Florida Fancy Guppy Club.

Many people came together to help the Florida Fancy Guppy Club to make this show as outstanding a success as it was including Tampa Bay Aquarium Society, Coastal Aquarium Society, members of the Florida Tropical Fish Farmers Association and various manufacturers including one who produced a commemorative guppy food just for our show that was passed out to all the guests.

For more images: Subscribe to AMAZONAS and watch for the January/February 2015 Issue.